The broth of this soup is, in my opinion, the best part. Thanks to the meatballs, the broth develops this ‘seasoned meat’ flavor, and a ‘juicy thickness’ that’s just to die for. With warming flavors for crisp autumn nights, this is a soup that’s an instant must for your seasonal repertoire. Now, since there’s a surprisingly fair amount to say about today’s soup and its ingredients, let’s get right to it. 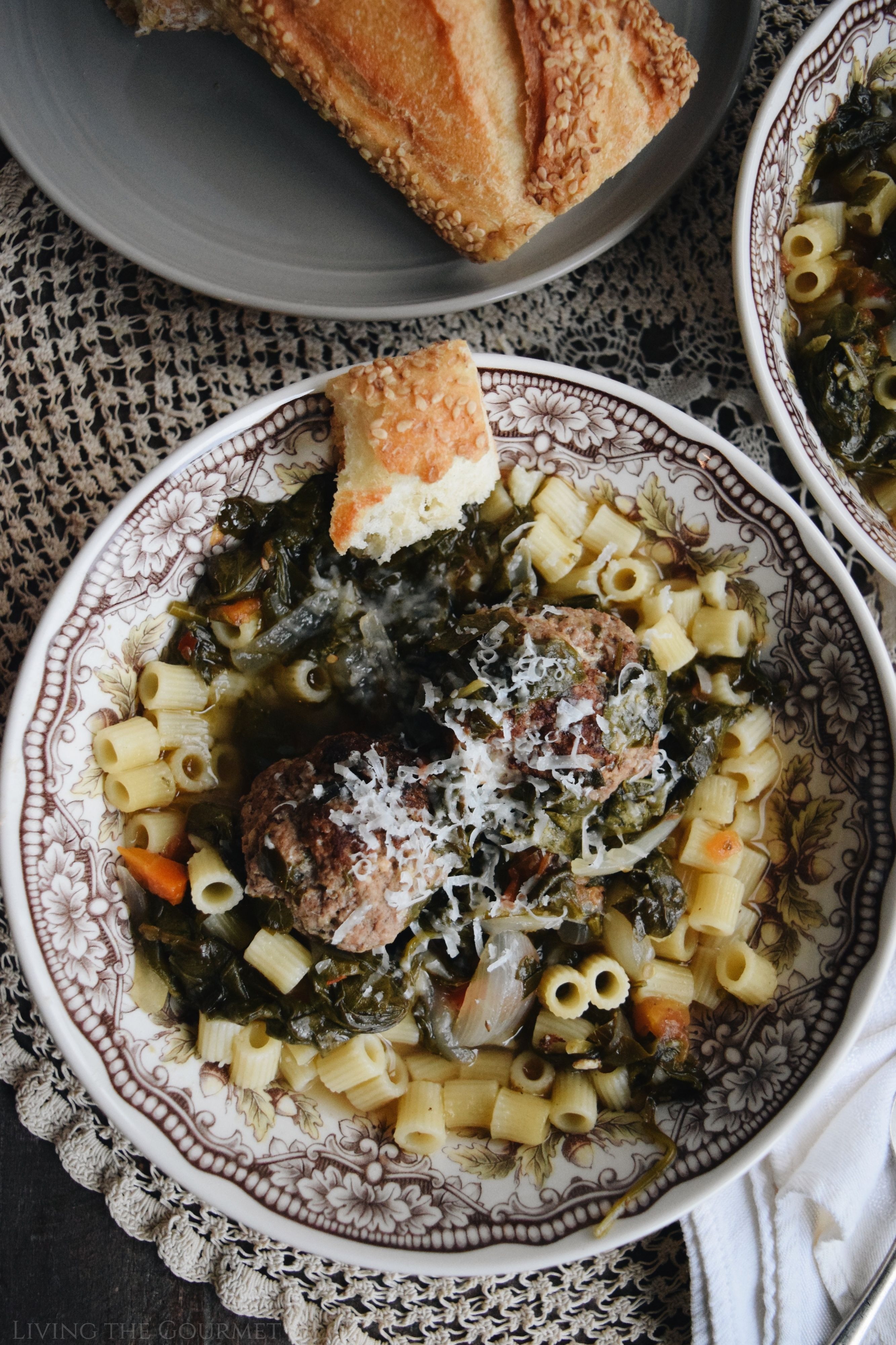 1)Curly Parsley vs Italian Flat Leaf Parsley.The main types of parsley are ‘Curly Parsley’ or Petroselinum crispum, and ‘Italian Flat Leaf Parsley’ or Petroselinum crispum neapolitanum.  Why did I give you the Latin names?  I’m actually not sure now that I’ve gone through the trouble of typing them out.  Moving right along.  That said, whenever you see parsley mentioned in a recipe, it is almost always notated as ‘flat leaf parsley,’ unless it’s being used as a decoration…in which case you’ll be using curly leaf parsley.  Why is this?  Because curly parsley tastes like…nothing, or – at most – like grass, and has almost no aroma.  However, what elevates curly parsley into the realm of the culinary, thereby saving it from merely being a weed, is that “Oh my goodness is it pretty.”  By contrast, Italian Flat Leaf parsley is about as ‘pretty’ as cilantro…which is to say it’s just green leaves on thin steams.  However, the reason flat leaf parsley is ‘almost’ always the preferred parsley for cooking is that it has a bold, fresh flavor, a neutral texture (whereas curly parsley is quite crunchy), and pleasant aromatics. 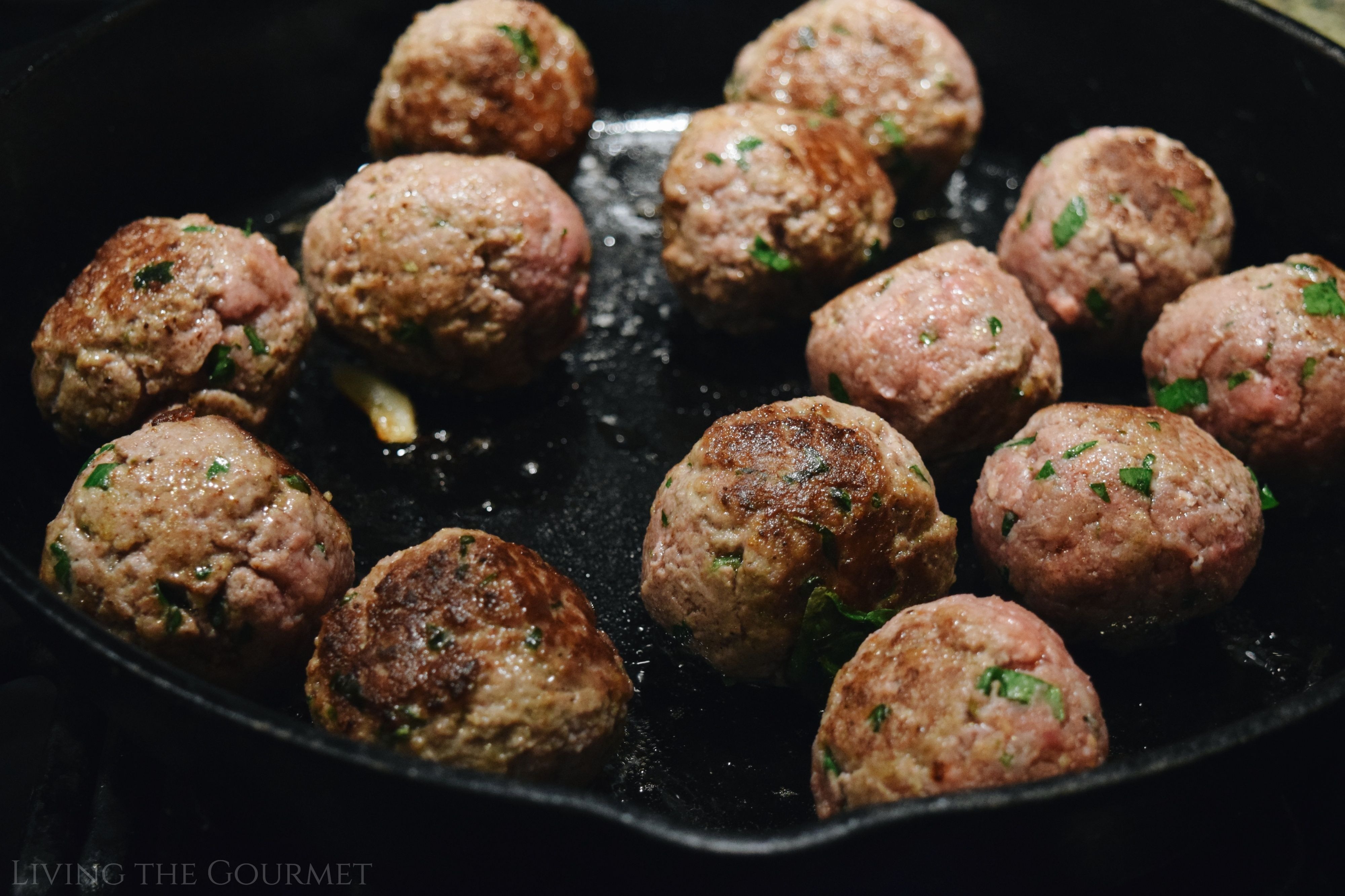 2) Pecorino Romano vs Parmesan vs Reggiano. One of the most enduring ‘Food Myths’ is that all grating cheese is more or less ‘the same.’ To start, Parmesan is simply American produced Parmigiano Reggiano – both are produced from cow’s milk, and both are aged for two or more years, which imparts the cheeses with what many describe as a ‘sharp’ and ‘salty’ flavor. Parmigiano Reggiano ‘must’ be produced in Italy due to EU and Italian trademark laws. So, at least in this case, the two grating cheeses are ‘basically’ the same, although Reggiano is considerably pricier, and regarded to be of generally higher quality overall. Pecorino Romano, by contrast, is produced from sheep’s milk, and is only aged for less than a year, giving it a slightly less sharp and considerably less salty flavor. Despite these differences, these three cheeses are often used interchangeably, and once they’ve been melted over sauce, or baked into something like a lasagna, few if any palates would ‘really’ be able to tell the difference unless these cheeses were used in positively ‘silly’ amounts. Bonus Fact: Locatelli is ‘not’ variety of cheese, it is instead an Italian brand of Romano. 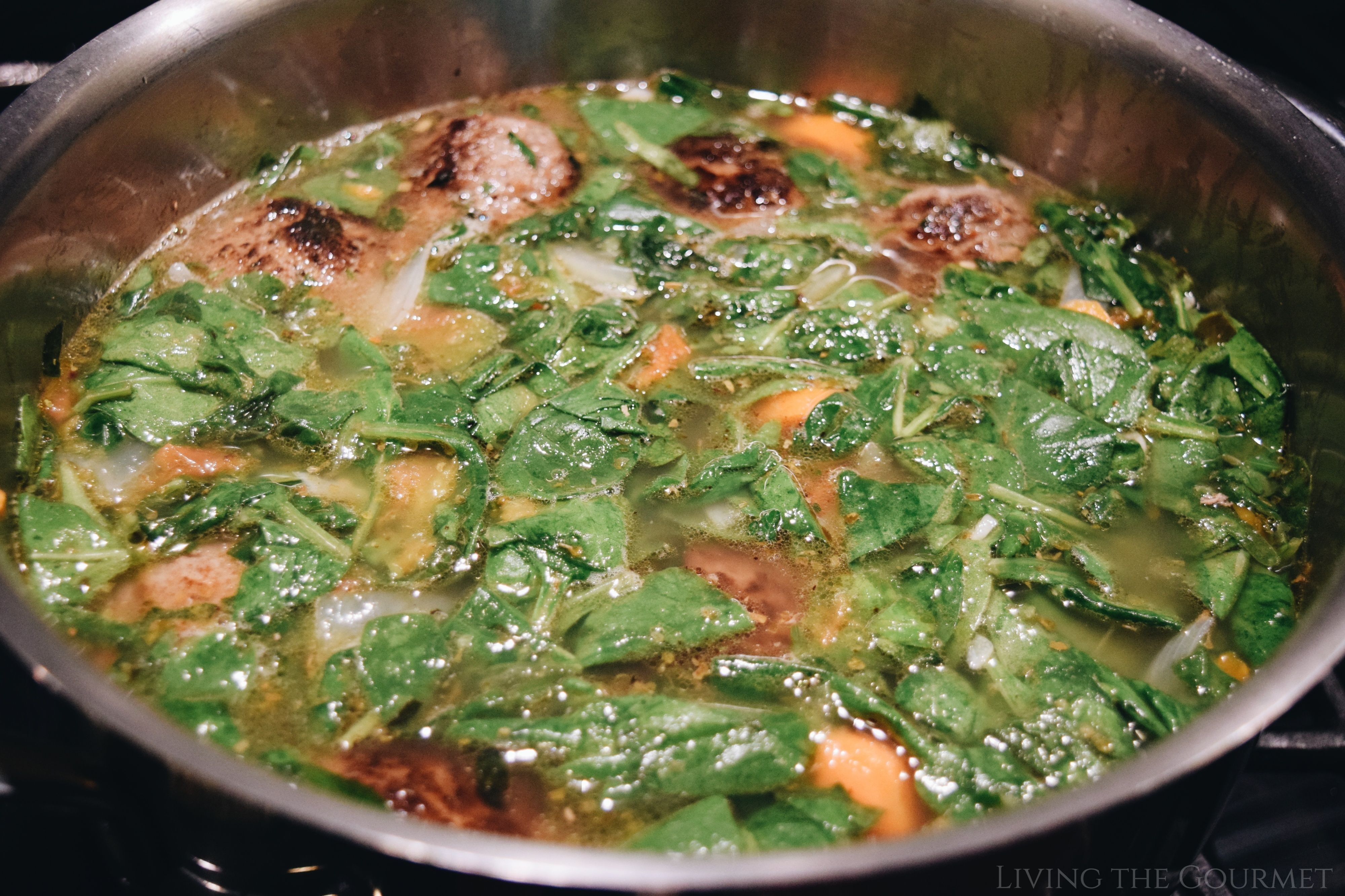 3) Italian Style Breadcrumbs…And How I Learned That Not All Crumbs Are Created Equal. “There are two types of breadcrumbs in this world, those who are Italian, and those who wish they were Italian.” To begin, ‘all’ breadcrumbs begin their life as grated bread, which is then either toasted in the oven on sheets, or toasted in cast iron pans, typically with either butter, olive oil, or cooking oil. “Italian Style” is…well, it’s more or less a “New World” phrase used by various companies to denote breadcrumbs that are baked in oil, and typically have some combination of parsley, pepper, garlic powder, oregano, onion powder, basil, and (rarely) red pepper. Naturally, these breadcrumbs are my default choice for things like today’s meatballs, breading eggplant, and baked ziti. 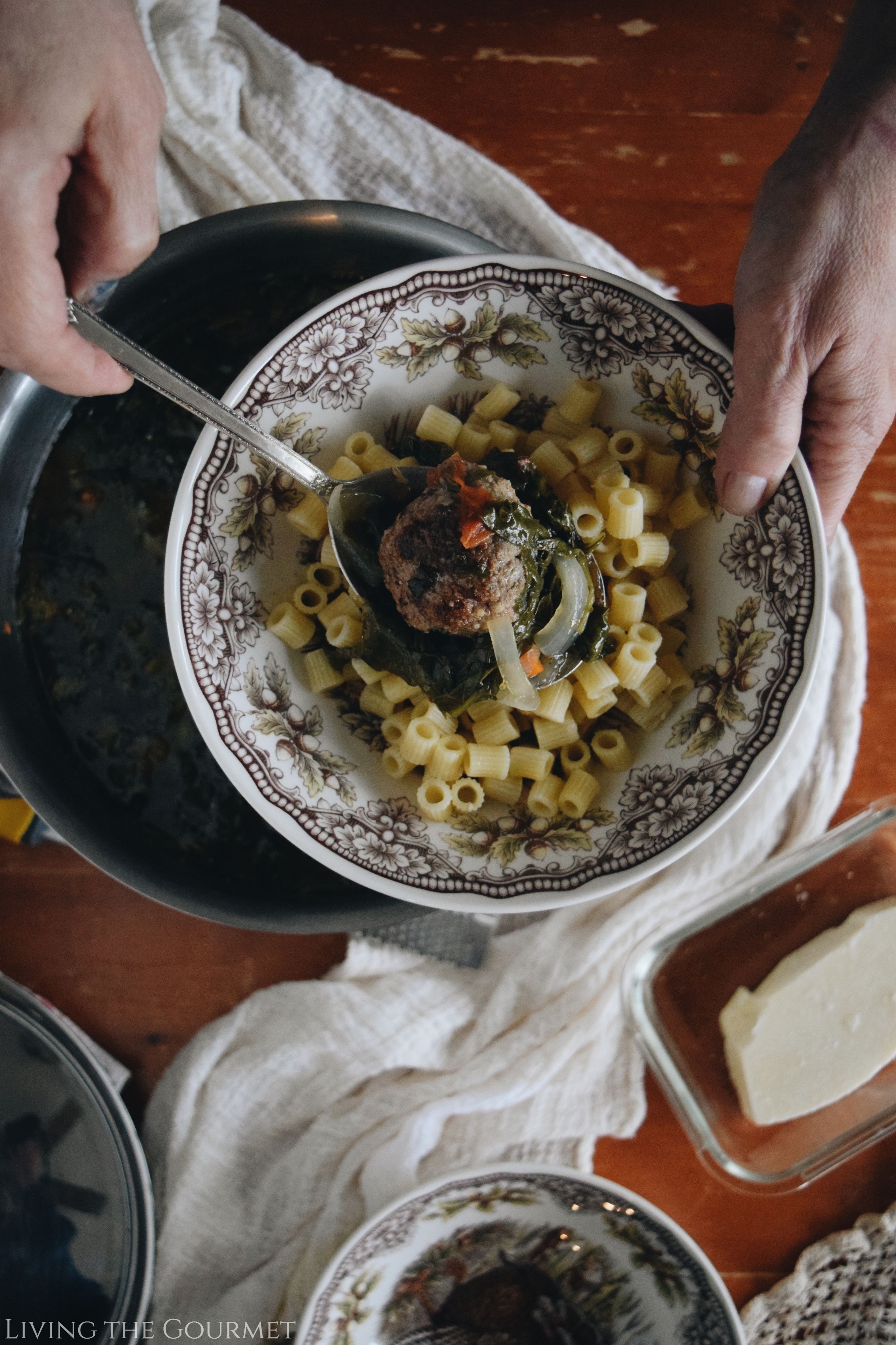 4) Baby Spinach vs ‘Adult’ Spinach. Contrary to popular belief, Baby Spinach is not undeveloped ‘standard’ spinach. Instead, baby spinach is simply the smallest variety of flat leaf spinach, and contains all of the same nutrient values as its larger cousins. While some frown on cooking baby spinach, the larger varieties, in my opinion, would simply be ‘too much’ for the soup, and I would have ended up chopping down into smaller portions anyway…so I suppose you might say I’m letting ‘nature’ do my chopping for me by using baby spinach. 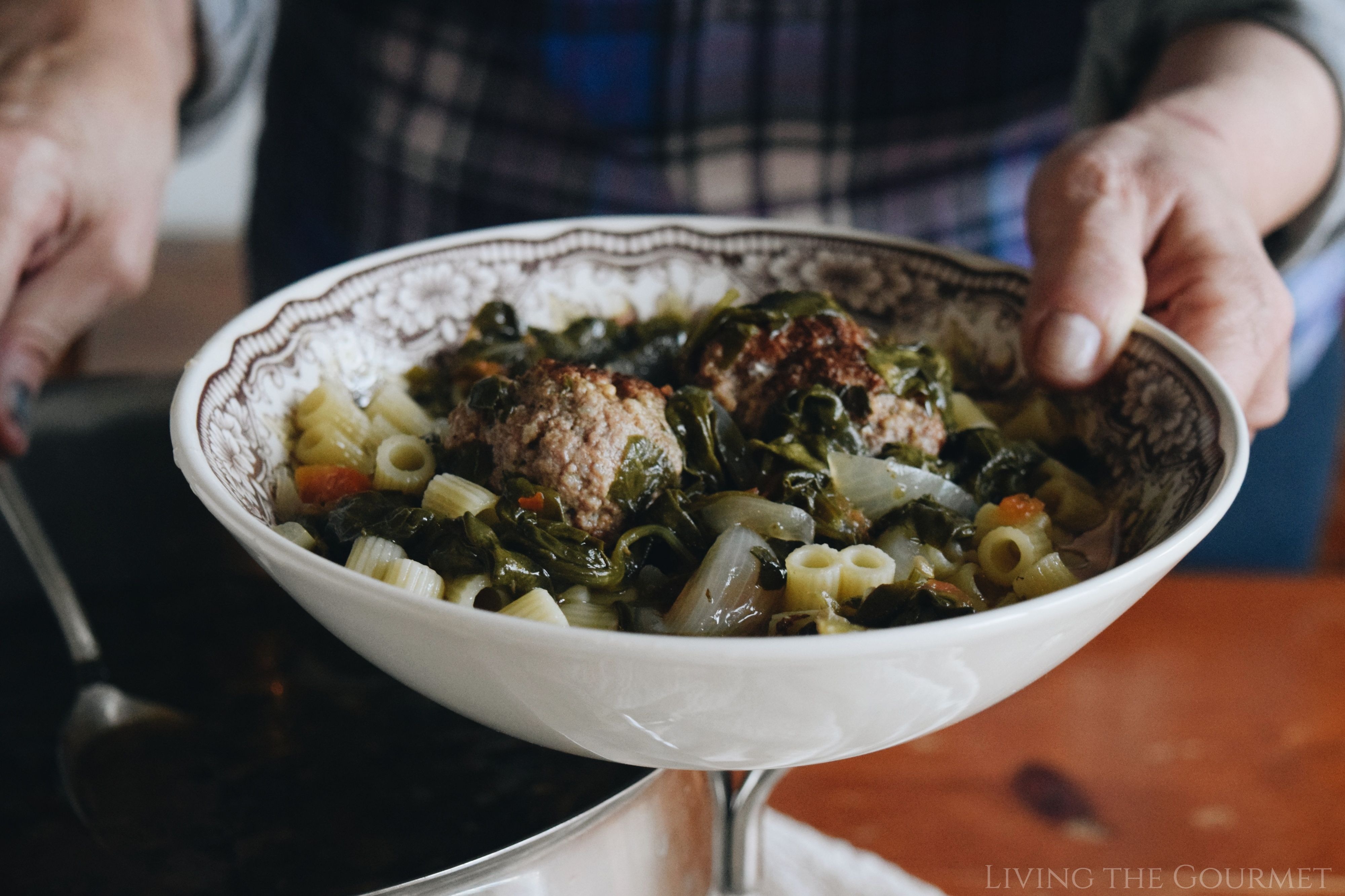 Yes, there is difference – a fairly substantial one – that might not be apparent at first glance. Standard sauce meatballs should be not only be juicy and moist, to point that they’re ‘oozing’ fatty juices, but they should also be ‘fluffy,’ almost ‘airy’ rather than ‘dense’ on the inside, they should be tender, they should be a delight of ‘texture’ not merely of flavor. 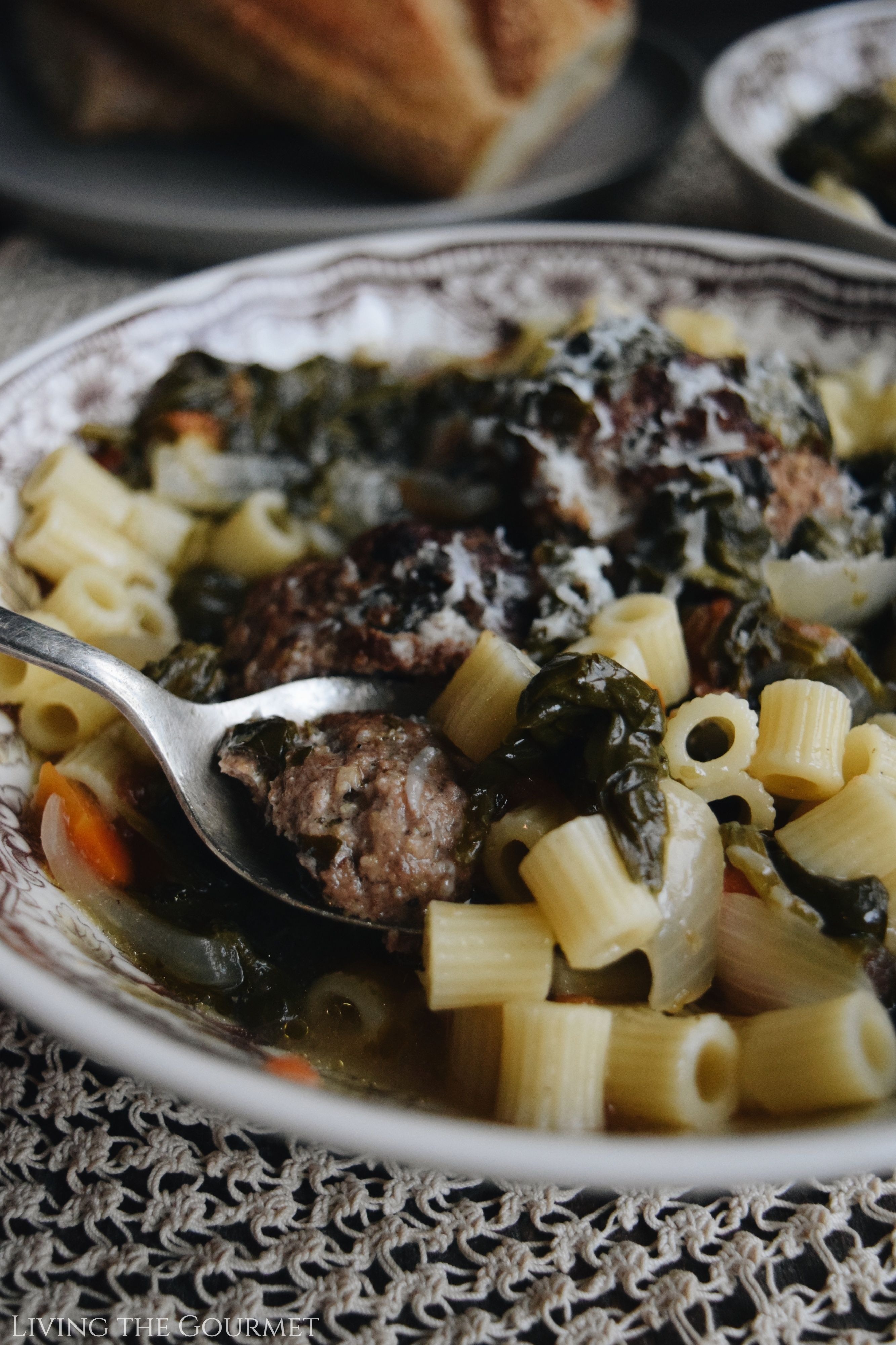 Now, how do you go about achieving this? Quite simply by packing the meatballs tighter and denser, and then proceeding to work them somewhat longer than you would standard meatballs. 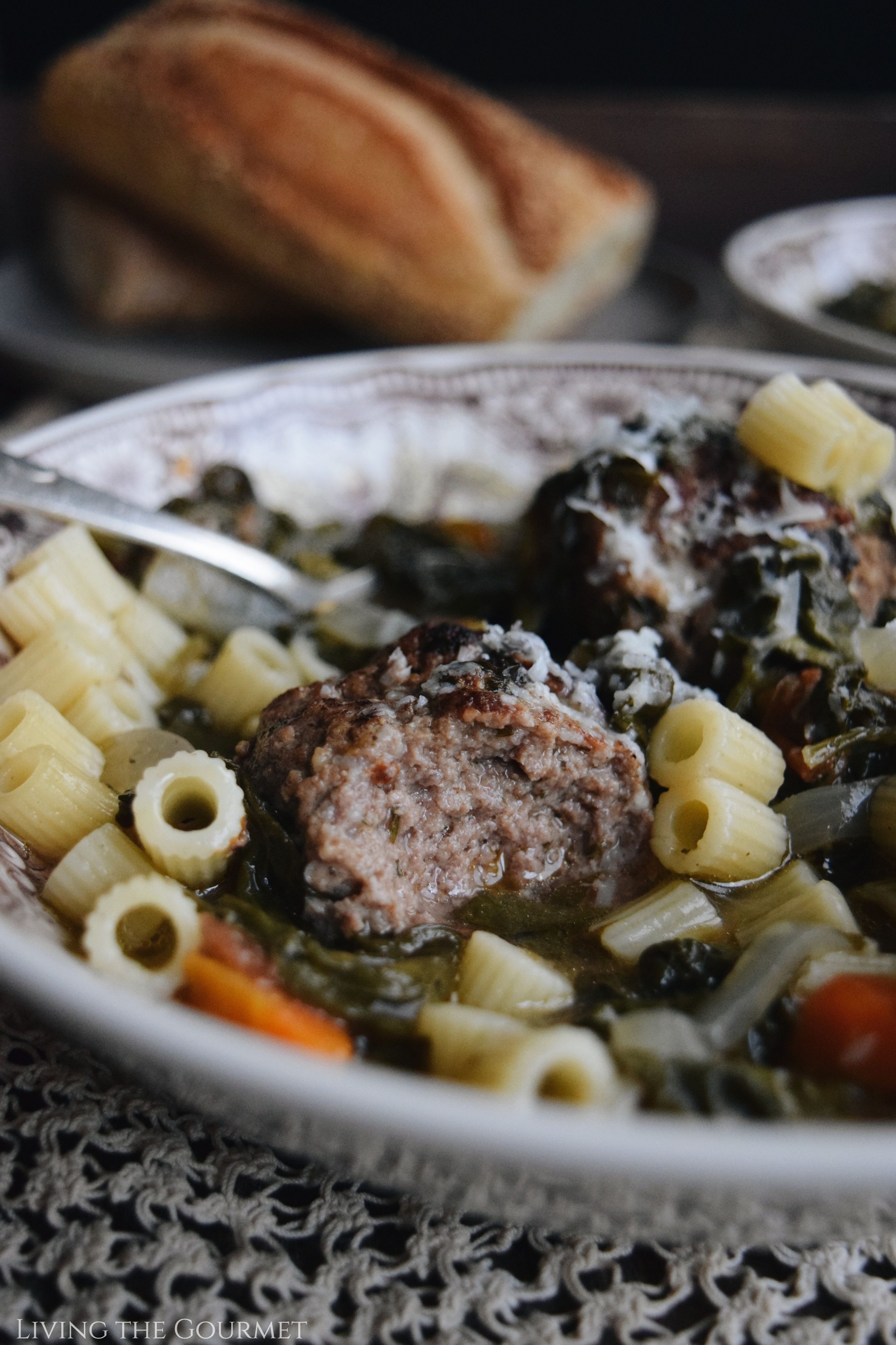 If You’re Craving More Meatball Goodness, Here Are Some of My Favorites

1) Pignoli and Raisin Meatballs. Possibly my favorite way to prepare meatballs, these have a subdued ‘buttery’ sweetness courtesy of the pine nut and raisin combination, set against a backdrop of moist, meaty juices of the fluffy meatballs.

2) Paprika Meatballs. Rustic ‘old world’ style meatballs in red sauce over spaghetti. The addition of the paprika gives these a bit of ‘earthy smokiness’ and just a hint of background ‘spice.’

3) Meatball Subs. Probably my son’s favorite ‘sandwich’ ever, these are my take on the classic “New York Meatball Hero.”

4) Greek Meatballs. The addition of cinnamon, golden raisins, and copious amounts of oregano, paired with a Greek Red Sauce, differentiates these Hellenic delights from their Italian counterparts. 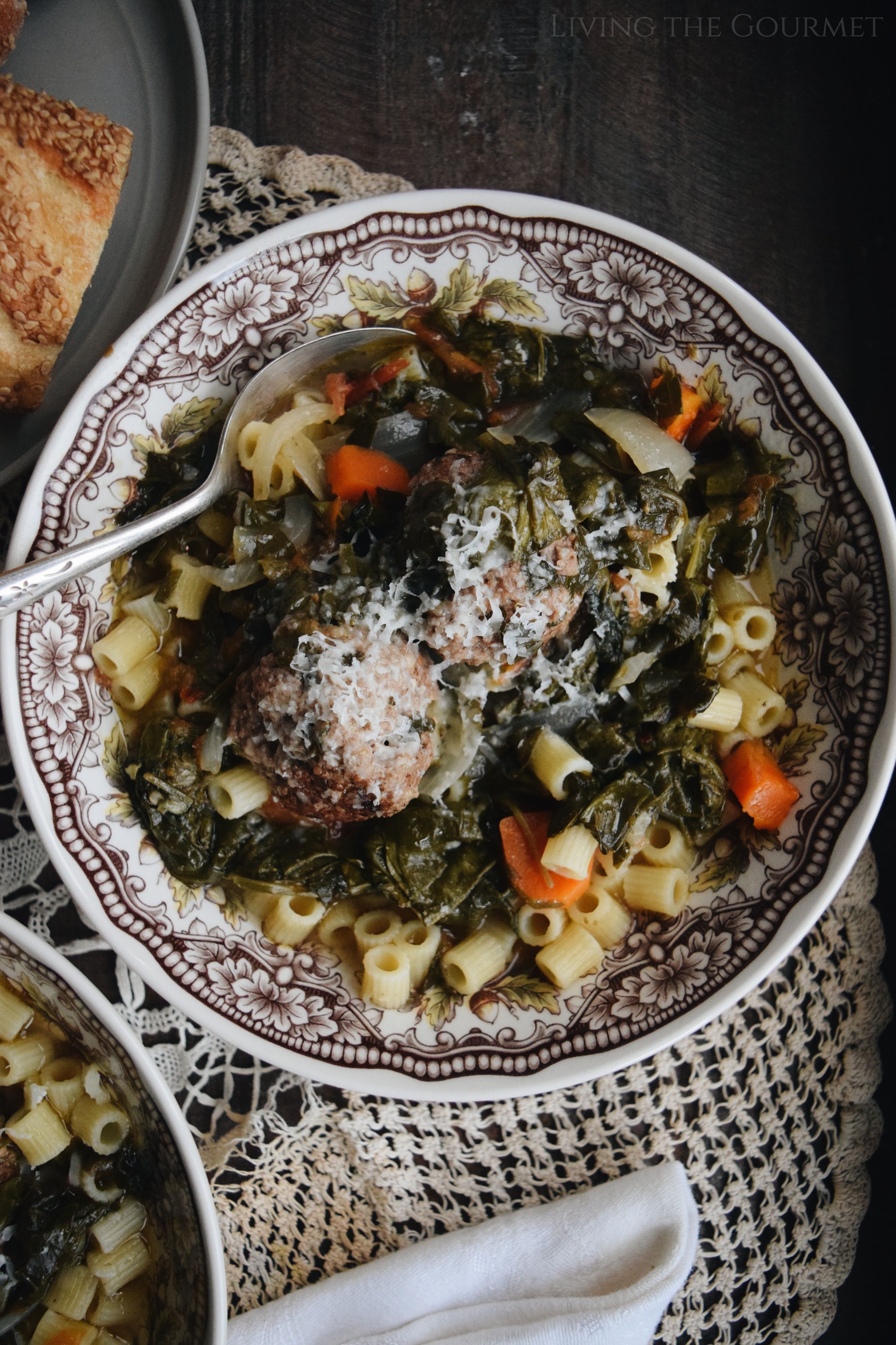 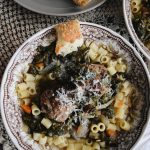 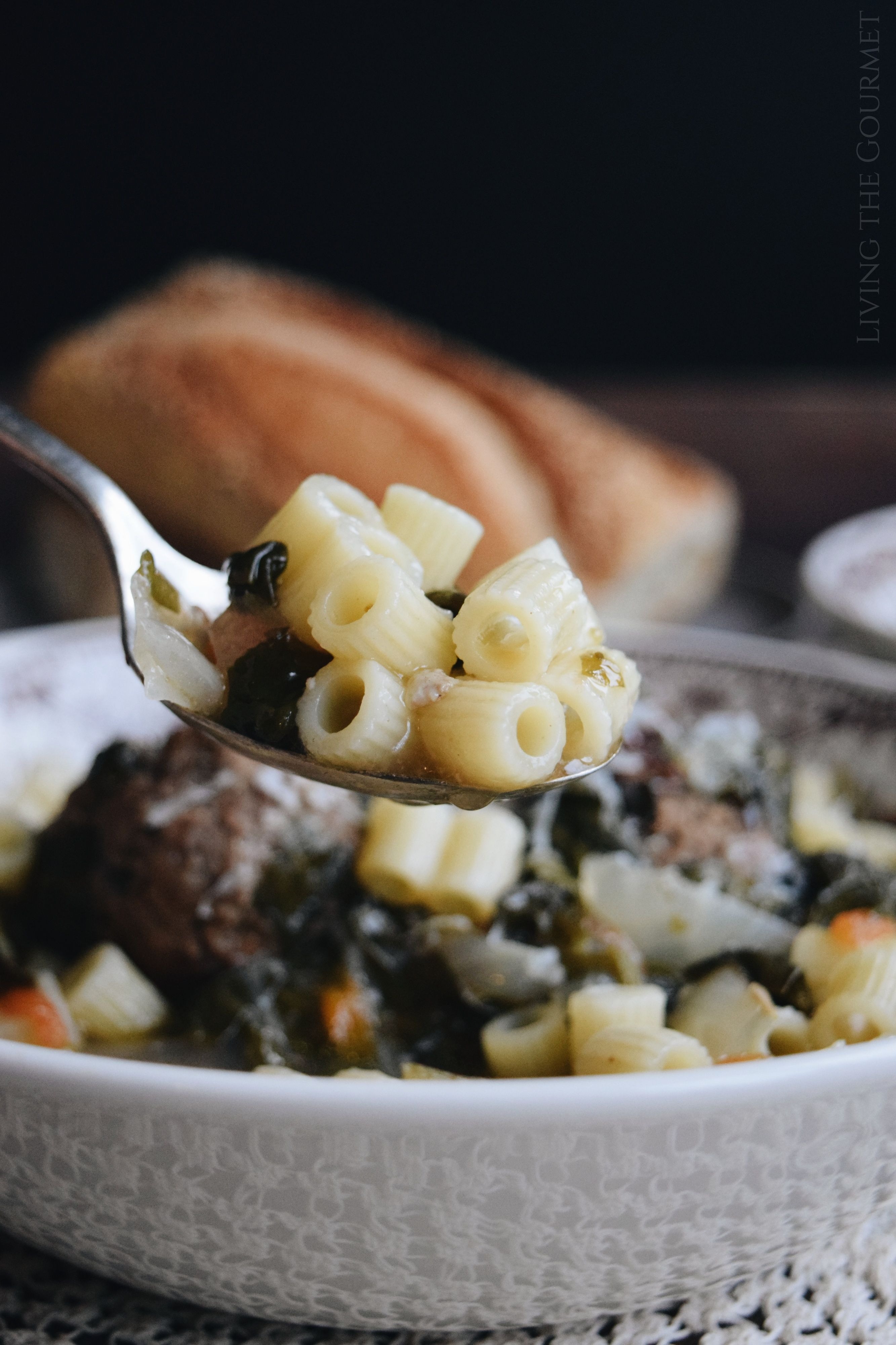