With just a handful of pantry spices, you can make your very own Pumpkin Pie Spice mix to have on hand throughout the season!

Our Pumpkin Spice is a super simple combination of just four basic ingredients; cinnamon, ginger, cloves, and nutmeg.  This recipe can be mixed right at home in mere minutes.  As an added bonus, this spice mix can be added to practically anything you can imagine – more on that below.

Storing today’s pumpkin spice mix couldn’t be simpler.  Just stick it in an airtight jar, set the jar in you spice cabinet, and it will keep all season long.

Below we’ll be covering ‘what’ pumpkin spice exactly is, providing an ingredient checklist, and going over some creative ways to really pack in the flavor all season long.

What is Pumpkin Spice?

Short Answer: Cinnamon mixed with some combination of cloves, nutmeg, ginger, and allspice, with the occasional appearance of brown sugar.

If you want a longer answer, here it goes.

Nailing down precisely ‘what’ Pumpkin Spice is, and what it’s supposed to taste like, can be a bit difficult. This is in part because Pumpkin Spice is a bit like curry in that it is not an actual ‘spice’ but rather a mix of spices.  As a result, it should be no surprise that commercially available blends are all different from one another – sometimes drastically so.  Add to that the various ‘artisanal’ blends produced in-house by coffee shops and bakeries around the world, and the picture becomes even more muddled.

However, in general, the recipe usually comes down to a cinnamon-based blend of nutmeg, ginger, cloves, brown sugar, and allspice.  Allspice is, by all accounts, the rarest addition to the mixture, and is used in the smallest quantity.

This recipe originated as the flavoring for pumpkin pie.  Over the decades, it has since become an industry unto itself, with Business Insider reporting that pumpkin spice products generate some half a billion dollars annually.

What to do with Pumpkin Spice 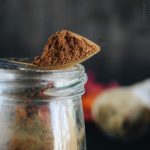