This post has been sponsored by Citerrio. All opinions expressed are my own. #CitterioAmbassador

Today we’re preparing a pasta topped with a light wine and tomato sauce prepared with pancetta, anchovies, and garlic. This is a super simple yet flavorfully complex pastas recipe, that’s light yet satisfying for those nights when you’re in the mood for just a touch of ‘sophistication.’

We’ll be preparing today’s recipe with a little help from my new friends over at Citerrio, but more on them in just a moment. 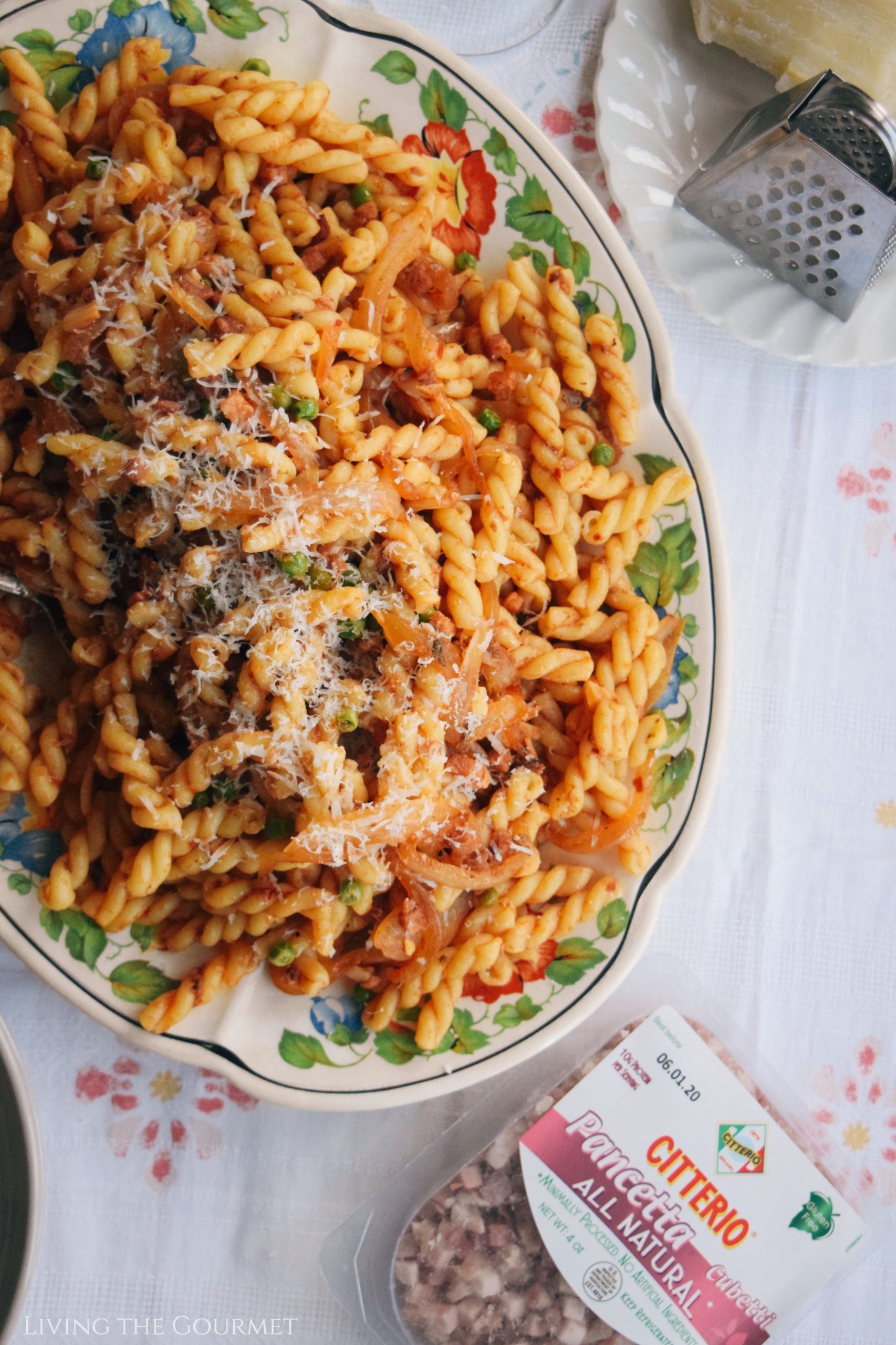 1) The Wine. I’m using white wine simply because that’s what I had opened, but red wine would work just fine as well. Remember, we add wine to sauce not only to give it that nice ‘wine flavor,’ but also to add acidity to the sauce – but without the ‘harshness’ of adding vinegar. With that said, don’t pour the half-cup of wine and think “That looks like too much.” Remember that, as with all liquids, a portion of the wine will simply evaporate. Secondly, not only will a portion of the ‘total’ wine evaporate, but ‘all’ of its alcohol ‘will’ evaporate – entirely – as alcohol has a much a lower boiling point than water. Alcohol boils at 173 degrees Fahrenheit, well under than the 212 degree boiling point of water. This means that even before the sauce has reached a ‘gentle simmer,’ the alcohol will have entirely departed the sauce in the form of steam – which, by itself, will reduce the total amount of wine you’ve added by anywhere from eleven to sixteen percent, depending on the wine you’ve used. In other words, roughly one quarter to one third of the total amount of wine you use will simply vanish as steam during cook. On bright side, that means you can feel free to increase the amount of wine in today’s recipe up to about a cup, depending on how much ‘acidity’ and ‘wine flavor’ you like in your sauce – it’s purely preference.

2) Pancetta. Think of pancetta essentially as cured Italian bacon that trades in a ‘smoky’ flavor for spices and aromatics. However, I’ll talk more about ‘what’ pancetta is and how it differs from regular bacon in some detail below. Right now, however I wanted to touch on the pancetta that I’m using in today’s recipe – Citerrio. Founded in 1878, Citerrio has been a trusted name in Italian cured meats for nearly two centuries, producing quality salami, capicola, mortadella, and, of course, pancetta. The pancetta from Citerrio is aged for up to three months, and is dry-rubbed with their select mix of spices, creating a flavorful and richly aromatic pancetta.

3) Sugar in Sauce – The ‘Why’ Behind the ‘Sweet.’ Like salt, sugar is a ‘blurring’ or ‘melding’ agent. That simply means that sugar helps to ‘bind’ flavors together. In recipes like red sauces, chilis, or stews, where you have a medley of different flavors coming together, some of which actually contrast quite sharply, you need ‘something’ to help ‘blur’ or ‘meld’ those ingredients together. The primary item for doing this is salt, but sugar also has a very similar effect. However, unlike salt, sugar also ‘mutes’ or ‘blunts’ acidity – despite being somewhat acidic itself (chemically speaking). That said, unlike the ‘saltiness’ of salt, which can come through quite powerfully, the ‘sweetness’ added by sugar is much milder and harder to detect, especially when used in very small quantities. Thus, sugar serves two purposes inside of today’s recipe, melding together flavors and blunting acidity, while itself being a nearly ‘invisible’ ingredient. 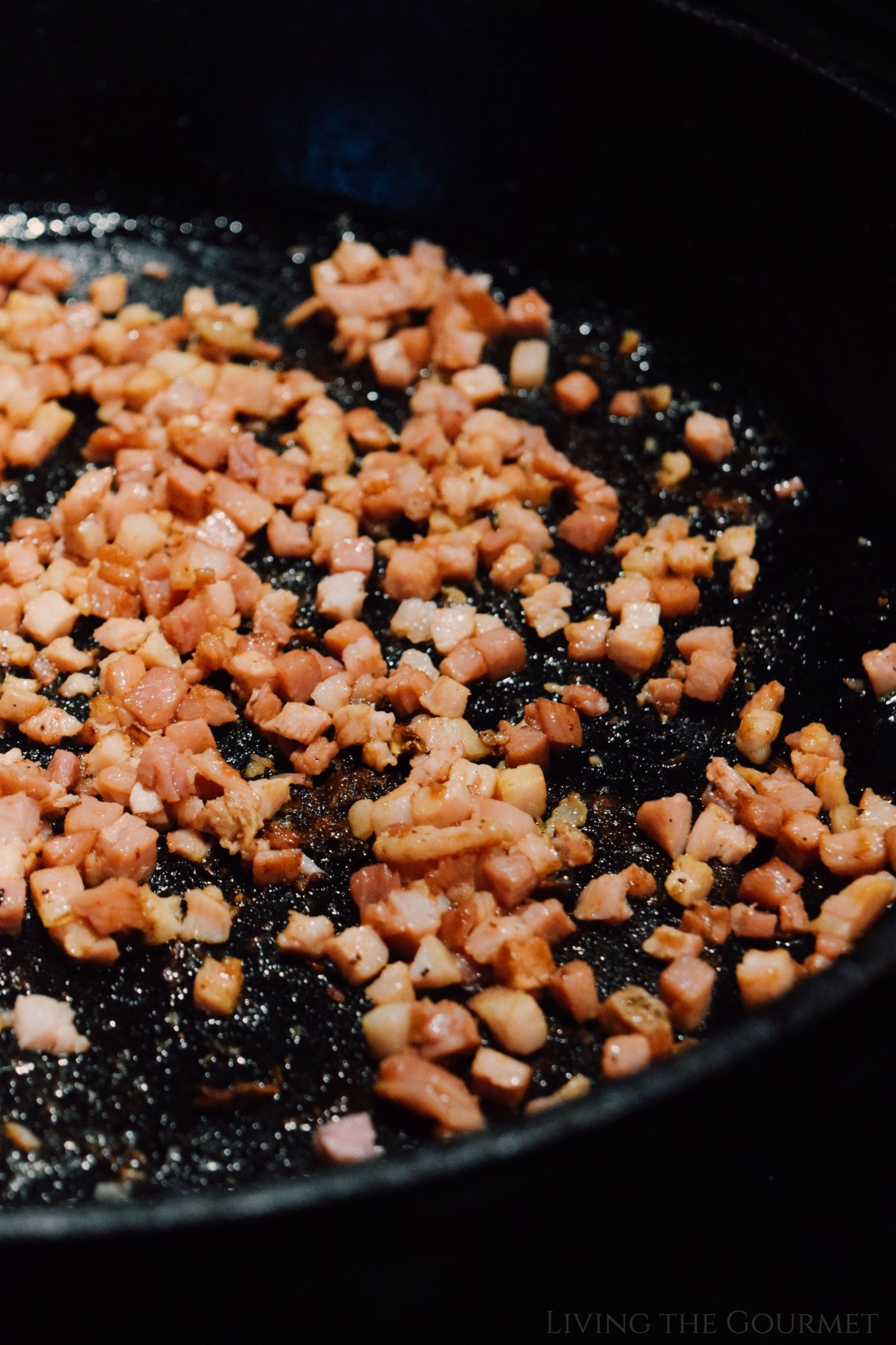 The phrase “Everything is better with bacon” entered the popular lexicon courtesy of the video game Halo Wars, but it’s a sentiment that’s likely been around for as long as humans have been curing and smoking pork bellies.

Some two and half decades ago, for example, the ‘Elvis of Cooking,’ Emeril Lagasse, forged a career based in part on his love of ‘pork fat,’ and his then-revolutionary liberal use thereof. These days, Instagram and the wider foodisphere have introduced us to the shockingly wide world of pork lard and its manifold applications – some of which are admittedly questionable. It seems everything has taken its turn in the fleeting limelight of viral-sensationalism, with the internet having gone wild for frying eggs, rice, toast, fish, steak, and French fries in pork fat, to then frying pork fat and bacon in pork fat…yes, you read those last two right. Pork fat fried bacon and pork fat fried pork fat. The recently-viral dish Tep Mo, for example, is simply pork fat that is allowed to fry in a pan in its own…fat.

Our current ‘pork belly enlightenment’ has come so very far that Food and Wine proudly proclaimed pork-based lard to be “The New Health Food” in a 2017 article, whose premise was only slightly tongue-in-cheek. I’ll let you be the judge of the merits.

But what of the origin of all of this ‘pork-lard-love?’ For most of us, our love of pork belly largely begins and ends with the pork belly’s cured incarnations. 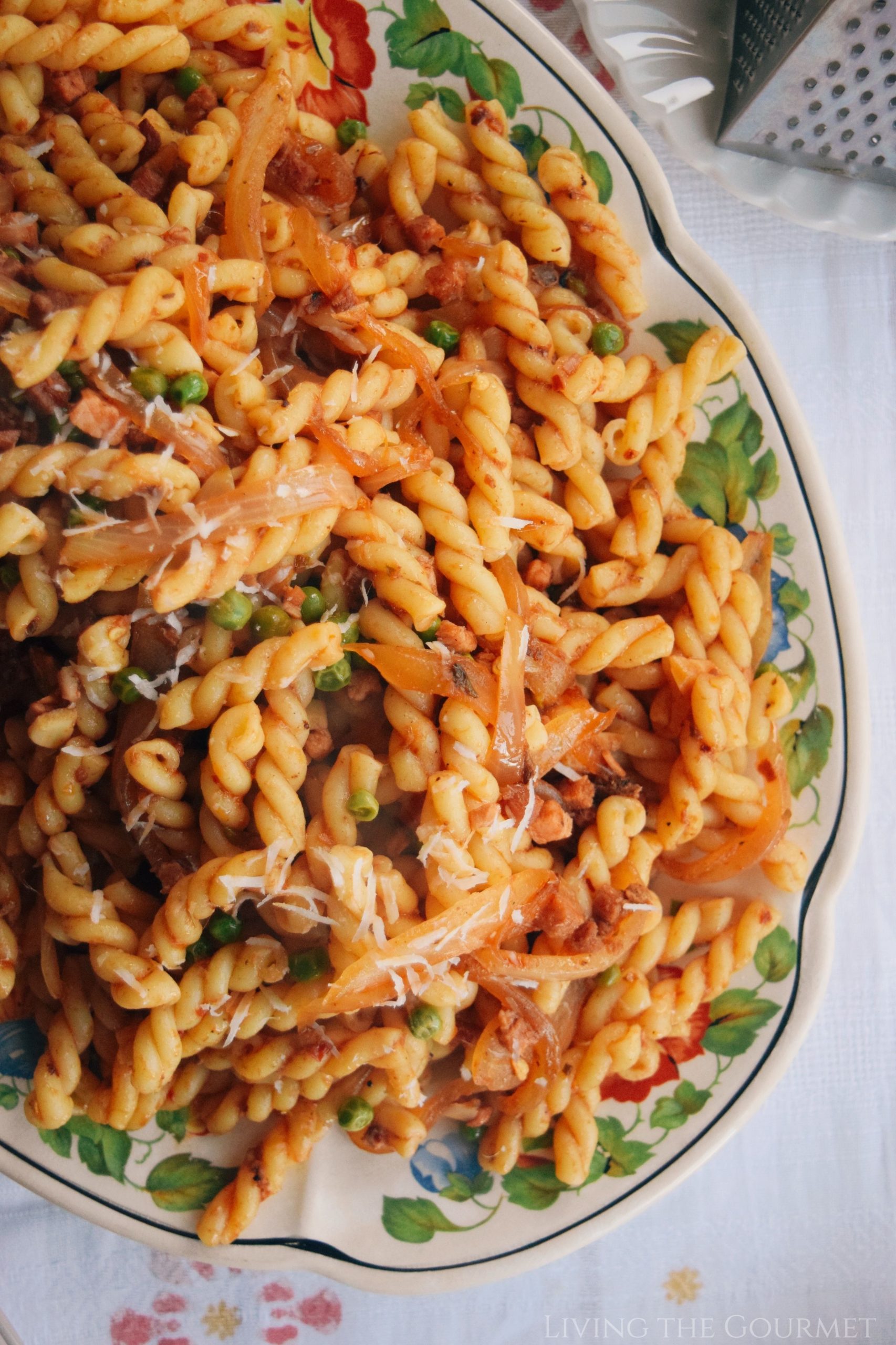 Bacon, pancetta, and prosciutto are the types of ‘bacon’ that we’re all likely most familiar – and so-called ‘American Bacon’ is far and away the most popular of the three.

Pancetta, on the other hand, is cured in salt and left unsmoked. Mild aromatics and spices are often applied to the pork during the curing process, and the composition of these blends vary widely between producers. Unlike bacon, which comes strictly in varying thicknesses of ‘ribbon’ slices, pancetta comes in several varieties of ‘cut.’ These include deli-style ‘logs,’ cubes of varying sizes, and ‘ribbon’ slices of varying thicknesses. Pancetta is aged for anywhere from several weeks to several months prior to being sold.

Finally, we come to prosciutto, which despite often being thought of as being similar to either bacon or pancetta, is in fact an entirely different story. To start, the outside of the pork is thoroughly rubbed down with salt, and sometimes a variety of spices, and is then left air-dry for anywhere from several months to several years. This creates a rich flavored and delicately textured ‘bacon.’ After curing, prosciutto is, almost always, cut ribbon thin, and then eaten ‘as is,’ as opposed to being cooked, though there are specialty recipes that call for prosciutto. 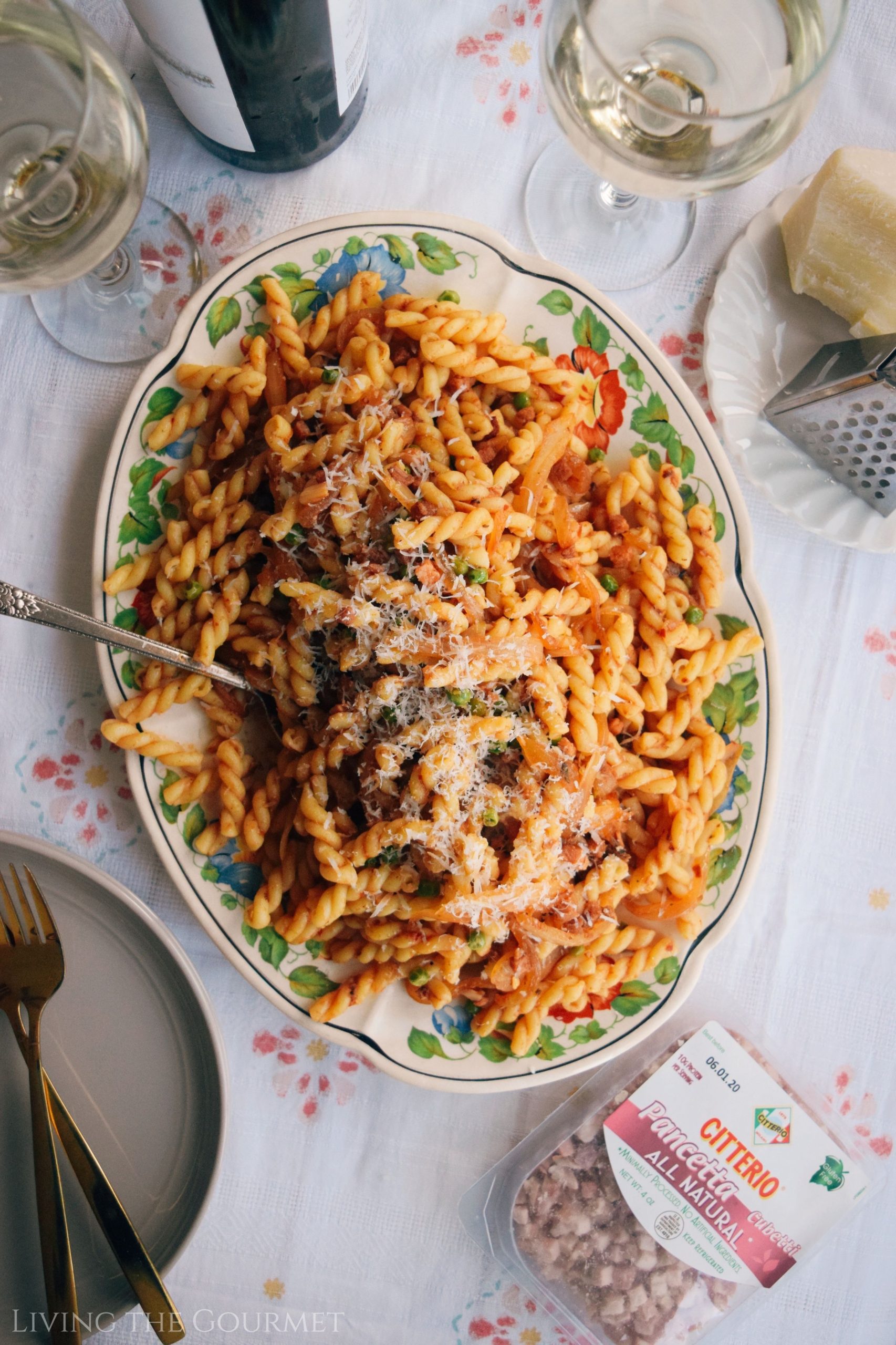 If you’re looking for more ‘qurantine friendly’ recipes, that use basic ingredients, which are easily substituted, Living the Gourmet has got you covered. Below are some of my favorite ‘quarantine-era’ recipes, which I’ve formulated to be as easy on your pantry as possible.

2) Pastina with Mushrooms and Bacon. One of the simplest pastina recipes I’ve ever made, it’s perfect for times like these when we’re all at the mercy of a global quarantine. This pastina cooks up very quickly, and keeps nicely for up to four days. Utilizing just seven basic ingredients (not counting salt, pepper, and the pastina itself), most of which can be swapped out for equally basic pantry-friendly ingredients, this pastina recipe is a must-have.

3) Simple Potato and Pasta Soup. A warming and simple soup comprised of garlic, shallots, and potatoes set over penne pasta, with thin sliced pan fried pepperoni. Simple to piece together, and featuring a medley of basic ingredients, this is soup is perfect for those of us currently on lockdown.

4) Mezzi Rigatoni With Bacon and Tomato. I think everyone should have at least one ‘basic’ red sauce in their culinary repertoire, a basic red sauce that they can build on and experiment with, and that’s really where this recipe comes in. This is super-simple, back-to-basics tomato sauce prepared with crisped bacon, cannellini beans, and plenty of red pepper. It’s perfect for busy weeknights, or for times when you might not have a whole lot of ‘fancier’ ingredients on hand. a basic tomato sauce that I prepared with crisped. 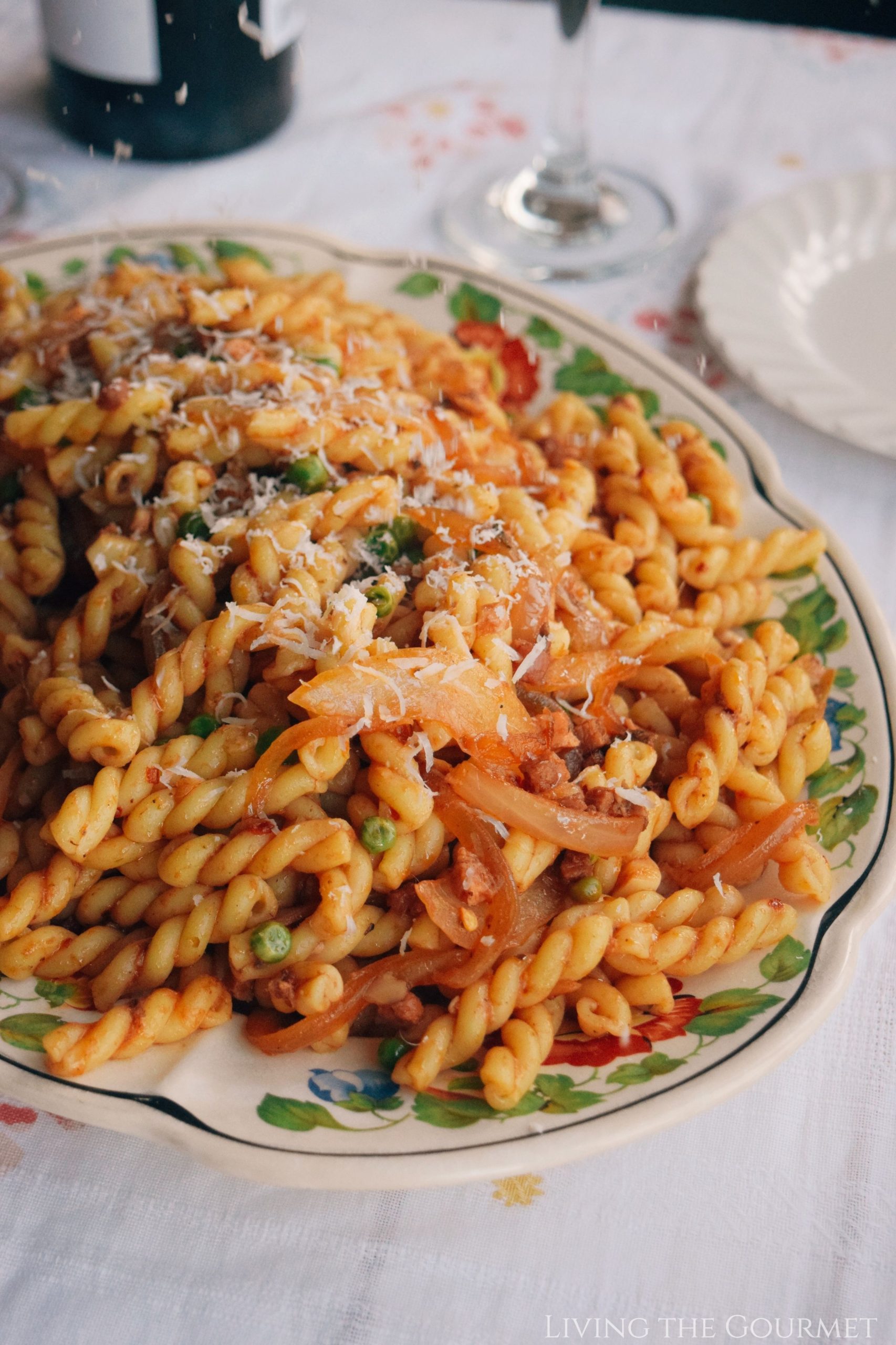