This post has been brought to you by Brotherhood Winery. All opinions expressed are my own. The following message is intended for those 21+. Please enjoy responsibly.

Today we’re sampling a pair of bottles from North America’s oldest winery, Brotherhood, which just so happens to be located in one of the New World’s oldest continually cultivated wine region’s – New York’s Hudson Valley. 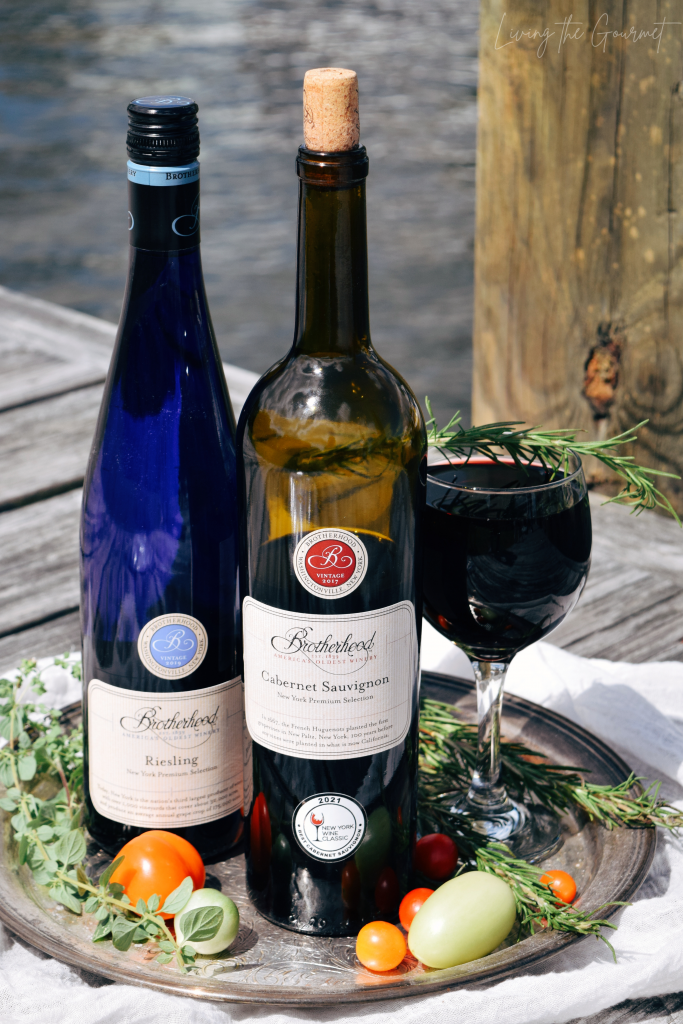 The Where – Hudson Valley, New York

The Hudson Valley American Viticultural Area (AVA) stretches from New York City up to Albany, encompassing the entirety of Duchess, Columbia, and Putnam counties. One of the region’s most dominant features is its namesake river, the Hudson, which cuts through the AVA from the Atlantic through to the center-point of New York State. Much of the region’s vines are planted along the western shore to maximize warmth from the morning sunshine. This is a necessity since it is only a ‘slight’ exaggeration to describe regional temperatures as ‘arctic,’ with the average winter night temperature clocking in at around twenty degrees Fahrenheit. While summers are mercifully warm, they offer a problem all their own, since humidity is in excessive supply, which can decay or disease vines.

Temperatures and humidity aside, the Hudson features a range of complex geological conditions, with glacial trails having left behind soil deposits rich in limestone, shale, schist, and slate. These traits were noticed early on by Dutch settlers, who immediately began planting vines in the 1600s. As a result, the Hudson Valley is not only among the USA’s oldest continually cultivated winemaking region, but indeed in the entirety of the New World. However, it wasn’t until 1839 that the first commercial vintage was produced in New York, from Brotherhood Winery, making Brotherhood the oldest continuously operating winery in North America. 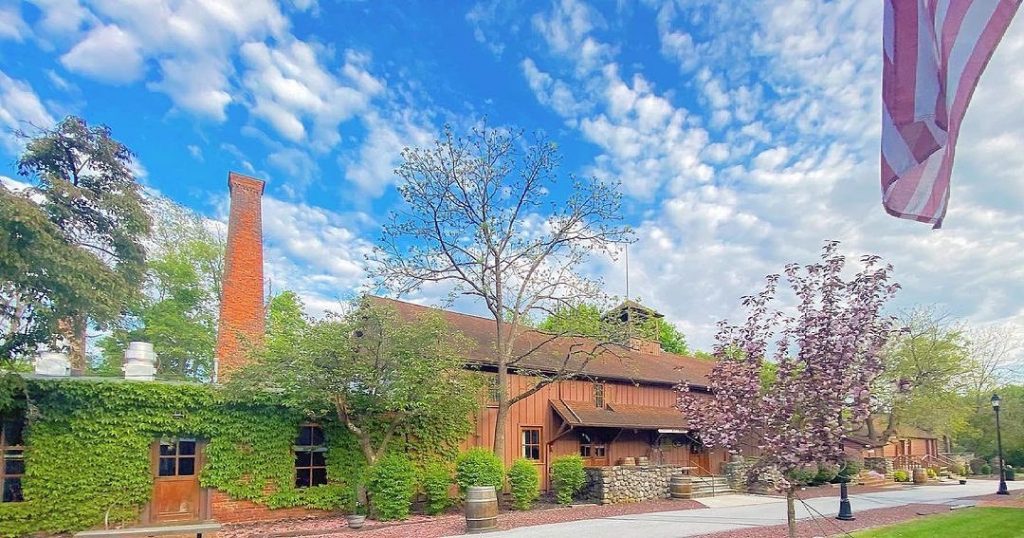 Alas, however, the Hudson Valley’s earliest wines were of largely dubious quality, and focused almost solely on producing wine from grapes native to North America. While these local grapes are still occasionally used to produce wine (mostly as a novelties), you’re likely most familiar with concord and Catawba grapes as the fruit behind your favorite juices and jams. It was this early focus on native produce that served to alienate New York vintages from both commercial and critical acclaim.

The result was nearly a hundred years of uninterrupted obscurity for the region, a period that almost doomed New York winemaking. 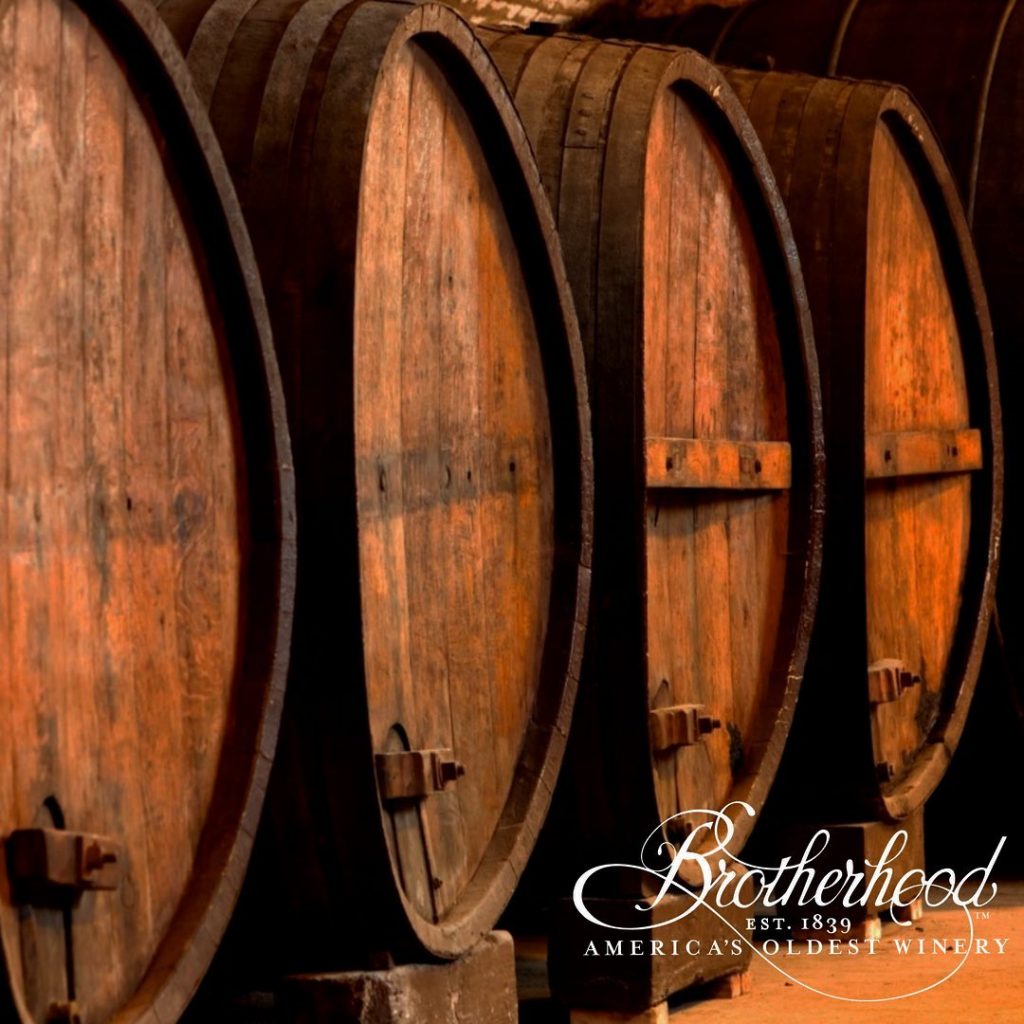 And then came Prohibition.

Predictably, Prohibition doomed almost ‘all’ American winemaking. This head-on assault came at a juncture when the still-fledgling industry was in desperate need of support and refinement. Instead of receiving support, wineries across the country were intentionally put out of business, and ‘most’ vineyards were either sold off or repurposed to produce other crops.

The Hudson Valley, however, was one of the handful of exceptions, and continued operating via the production of sacramental (boiled) wine, and medicinal wines.

After the end of Prohibition, the Hudson Valley’s focus shifted back to producing wines from local varietals native to North America. This focus finally came to an end in the 1950s, when Ukrainian immigrant Dr. Konstantin Frank came up with the novel idea of using more marketable varietals from Europe such as Cabernet Sauvignon and Riesling, among others apropos to the climate and geography. Over the next two decades, the idea caught on, and New York wine began taking off. To bolster the industry, the state streamlined the process of opening wineries with legislation in the 1970s, and in 2011 the state eased licensing regulations on wineries’ tasting rooms by allowing multiple rooms to be hosted on a single license.

The end result, both from this change in varietal focus, and in the easing of regional laws, has resulted in New York earning a reputation for excellence in quality, and as a prime destination for wine-based tourism. 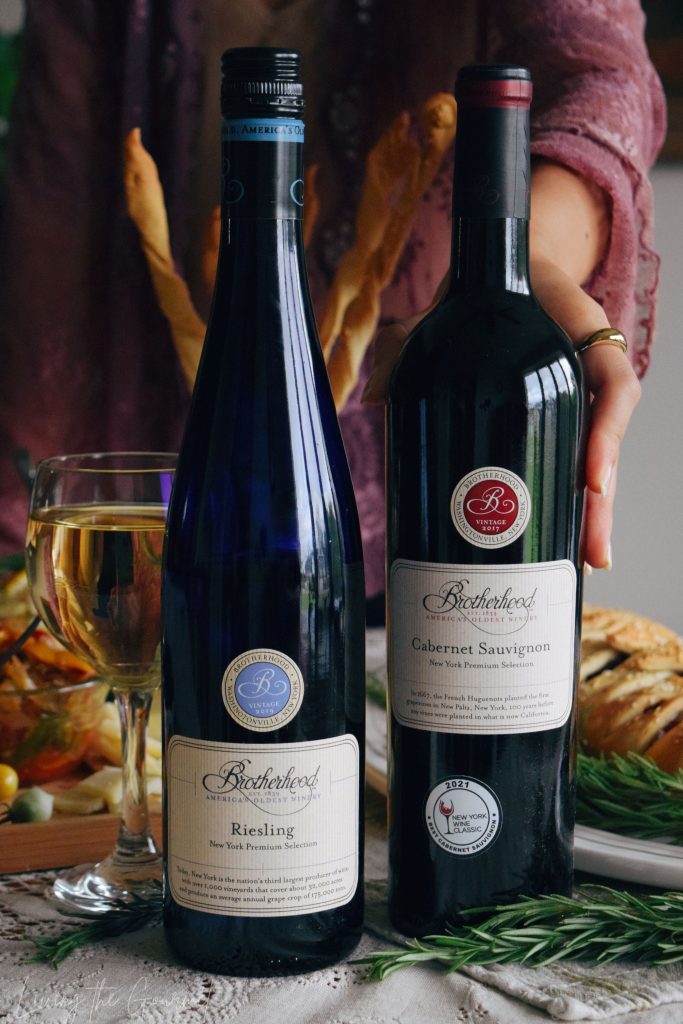 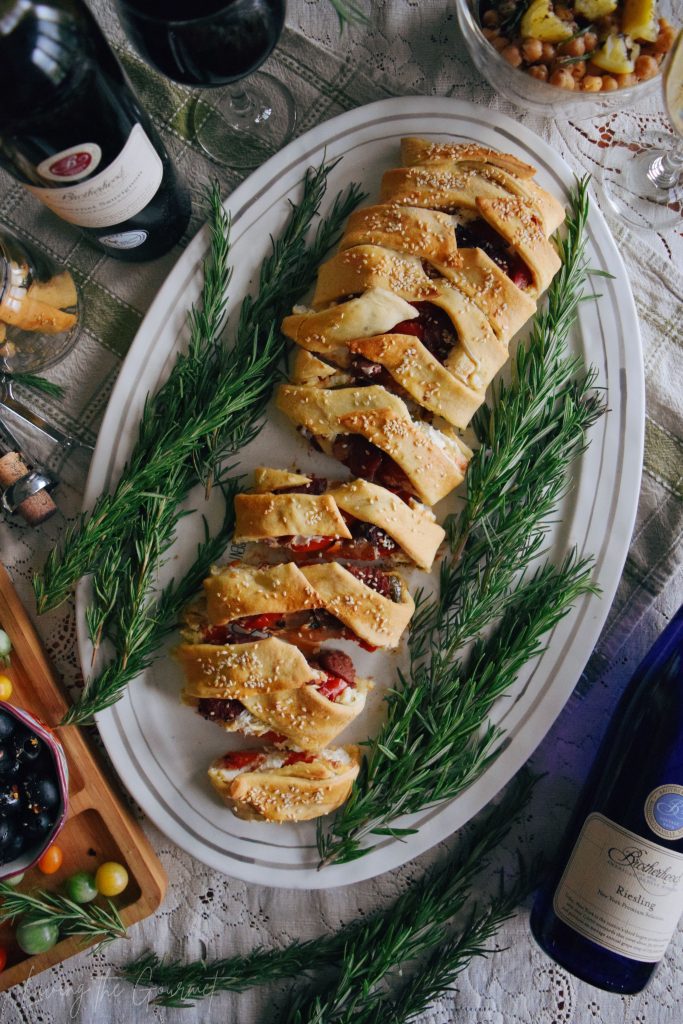 The Cabernet Sauvignon introduces itself with mixed red and dark fruit notes off the top of the glass. Deeper into the glass these manifest as black cherries or perhaps sliced black plum. Peppery and oaken notes perforate through the fruit essences every now and again, along with just a hint of what I’ll describe as allspice. On the palate, the wine is medium bodied with medium tannins, and features pleasant acidity. In terms of flavor, the dark fruit notes are at the fore, but there is something vegetal in the background, or perhaps herbal, creating a complex and enjoyable wine from start to finish.

The Riesling opens with vanilla and white flowers, forming a sweet and floral bouquet. On the palate, the wine is best described simply as ‘crisp and refreshing,’ being pleasantly sweet with a light minerality, or perhaps something ‘minty’ framing oak and white stone fruit notes. This, in my opinion, is a real gem of a bottle, especially at this price point.

1) With the Cabernet Sauvignon think by-the-book cabernet sauvignon pairings. That means meaty entrees, red sauces, or simply ‘rich foods’ as the winemakers themselves suggest. For example, a prime rib prepared with a curry and cayenne-based rub mixed with garlic, coriander and cumin would pair deliciously. Conversely, you might also consider something like my fried Greek meatballs, prepared with cumin, raisins, oregano, and cinnamon, which would plate beautifully over pasta with a spicy red sauce. On the other hand, something like the Pizza Strudels I’ve put together for today’s post is also an excellent pairing, which we’ve stuffed with a mix of grilled peppers, mozzarella, sausage, and ricotta. With all of that in mind, would you be shocked if I said a New York Style pizza would pair deliciously would today’s New York wine? Well, they ‘do’ pair deliciously. Here’s my tried-and-true recipe for what I consider the best homemade NY Style Pizza.

2) The Riesling. My opinion on this bottle, as with most semi-sweet Rieslings, goes in a few different directions. On the one hand, I might suggest something like my homemade General Tso’s Chicken, which features crispy fried chicken chunks prepared with a sweet and spicy dipping sauce. You might also consider something like fried tofu steaks prepared with a teriyaki and chili dipping sauce. Think spicy Asian cuisine, or delicate seafood or perhaps even sushi. 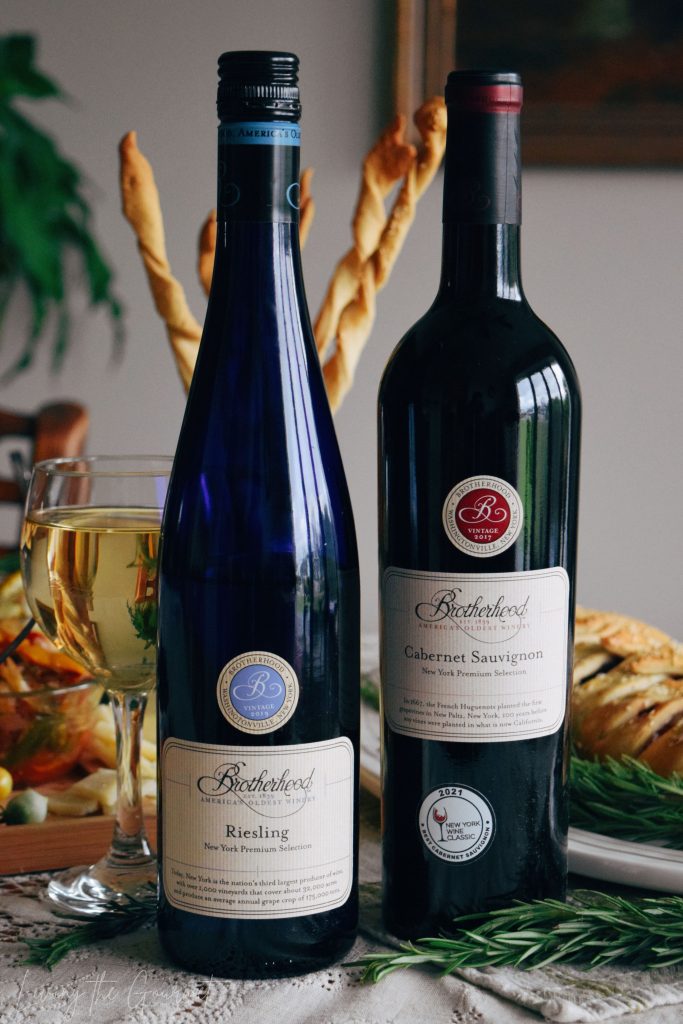 Scale
For the Dough:
For the Filling:

For the Filling & Assembly:

If you have any leftover dough, you can make breadsticks.  Follow the instructions below: 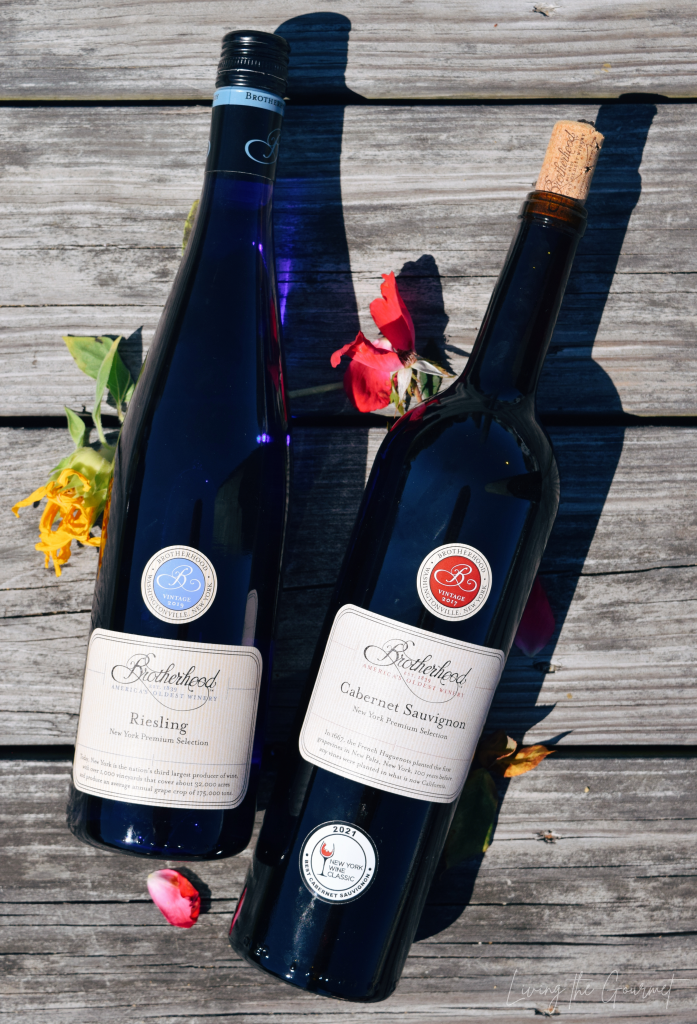