This post has been sponsored by Easy Bath Cheesecake Wrap. All opinions expressed are my own.

Impress your guests with this decadent dessert made famous by Junior’s! Topped with a Lavender Blueberry Sauce for a seasonal touch, this will become your new go-to recipe for cheesecake. 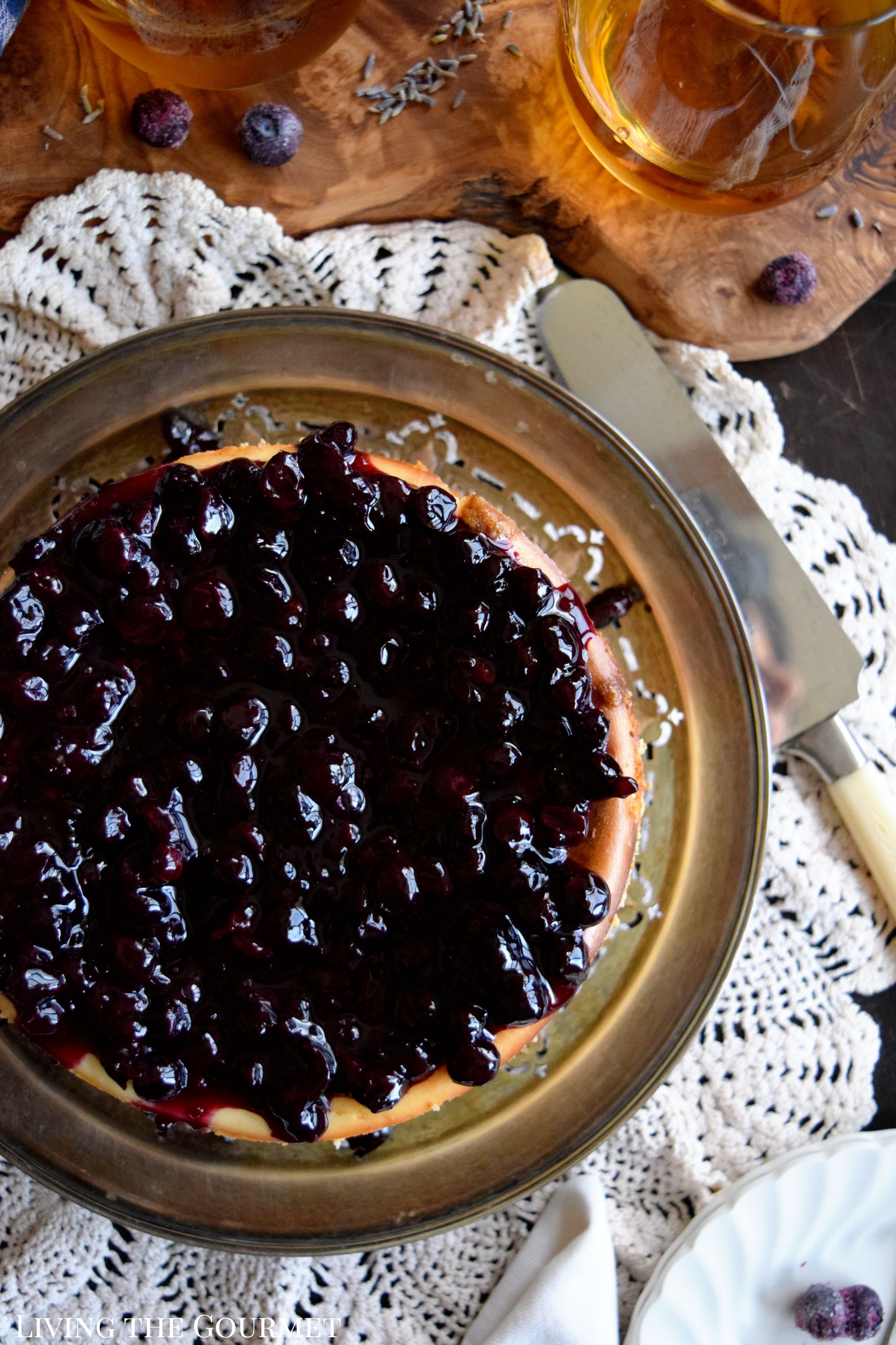 If I may lift the veil for just a bit, I will admit that I was trying to be my usual esoteric self with the opening of this post, and to find some obscure quote to lead off with, which I would then spin into something relatable or personal. Yet, I just simply couldn’t bring myself to do so this time around. You see, when I think of cheesecake I think of two things.

First, I think of balmy family dinners on my uncle’s barge – always balmy, somehow even in the winter months I remember the place being ‘balmy’ with the ‘porch’ door open overlooking the Great South Bay, or maybe that’s just a trick of memories formed in childhood. One of the fixtures of those dinners were cheesecakes brought home by my older cousin from Junior’s of Brooklyn, usually on his way back from work, and I still remember the big white boxes and the triple-wound bakery twine. Other times the cheesecakes would come from a local diner whose owner was a friend of the family, and whose baker was beyond stellar at the time – also a friend of the family. The second thing I think of is, admittedly, the Golden Girls sitcom and the running trope of the four women collectively loving cheesecake.

Anyway, simply put, cheesecake has been a fixture on my family’s dessert table for longer than I’ve been alive. Was it some intentional family tradition or act of heritage? Certainly not. Cheesecake was simply our dessert of choice for ‘any event.’ While things like grain cakes and rum cakes required either special events or daylong baking sessions, cheesecakes of decent quality on the other hand were readily available for purchase – and everyone loved them. 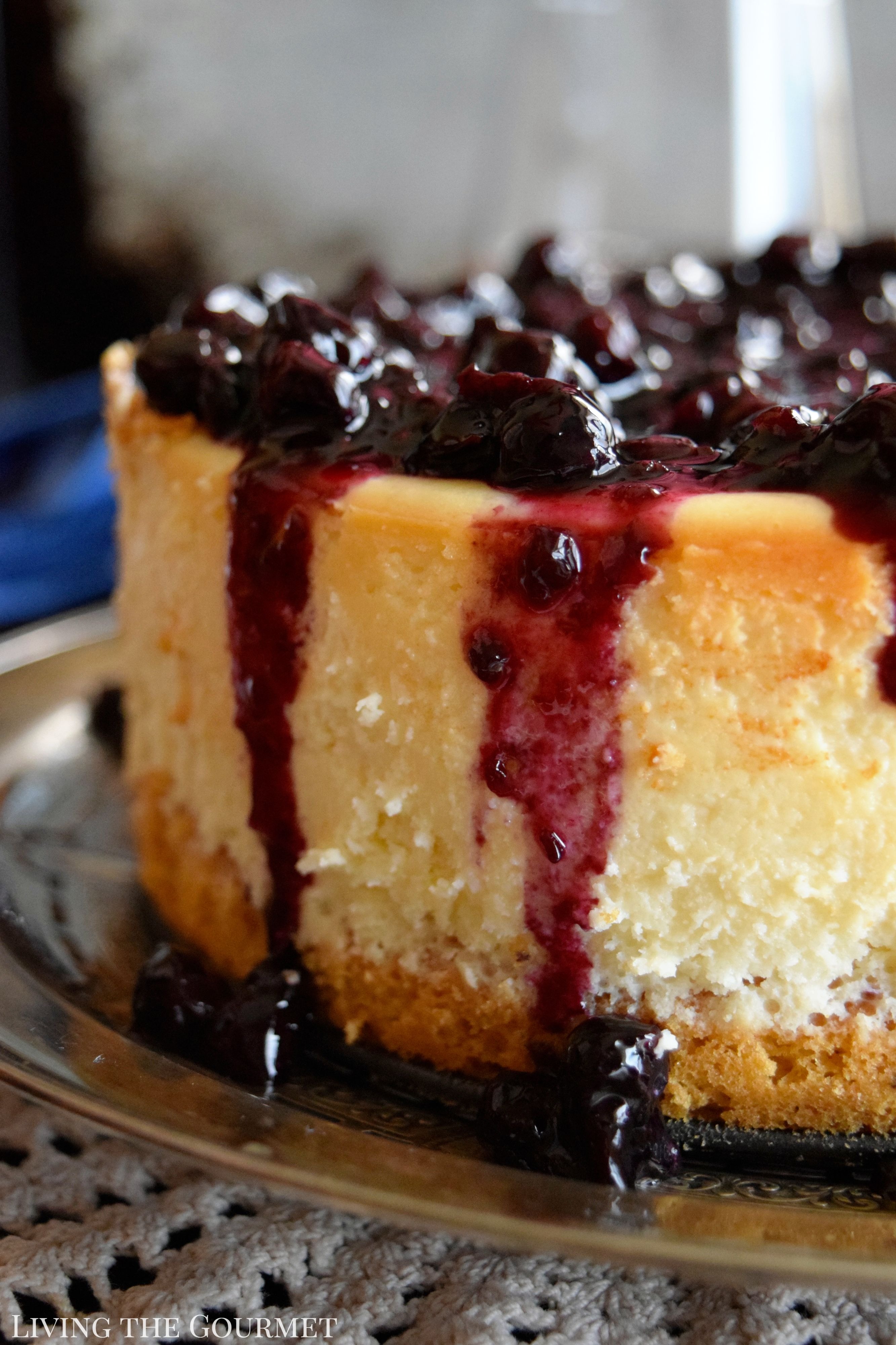 That being said, these days I’ve become a bit fonder of making my own as opposed to purchasing them – and that’s precisely where today’s recipe comes in, a Sponge Crust Cheesecake. I’m using this as an opportunity to show off a new piece of kitchen equipment, one I didn’t even realize I needed until it was brought to my attention, The Easy Bath Cheesecake Wrap – more on that in a bit.

To start things off we begin with the crust. We begin by beating together egg yolks, sugar, and the extracts listed below until it’s nice and thick, then fold in the ingredients and melted butter. Set that aside and whisk together egg whites with cream of tartar until it is frothy as shown below. Then add in the sugar and continue beating until stiff peaks form from the whites. Fold in this egg white mixture into the previous mixture with the egg yolks, and continue folding until the batter combines, at which point pour it into the prepared baking pan and bake for about ten to twelve minutes until the crust has set. 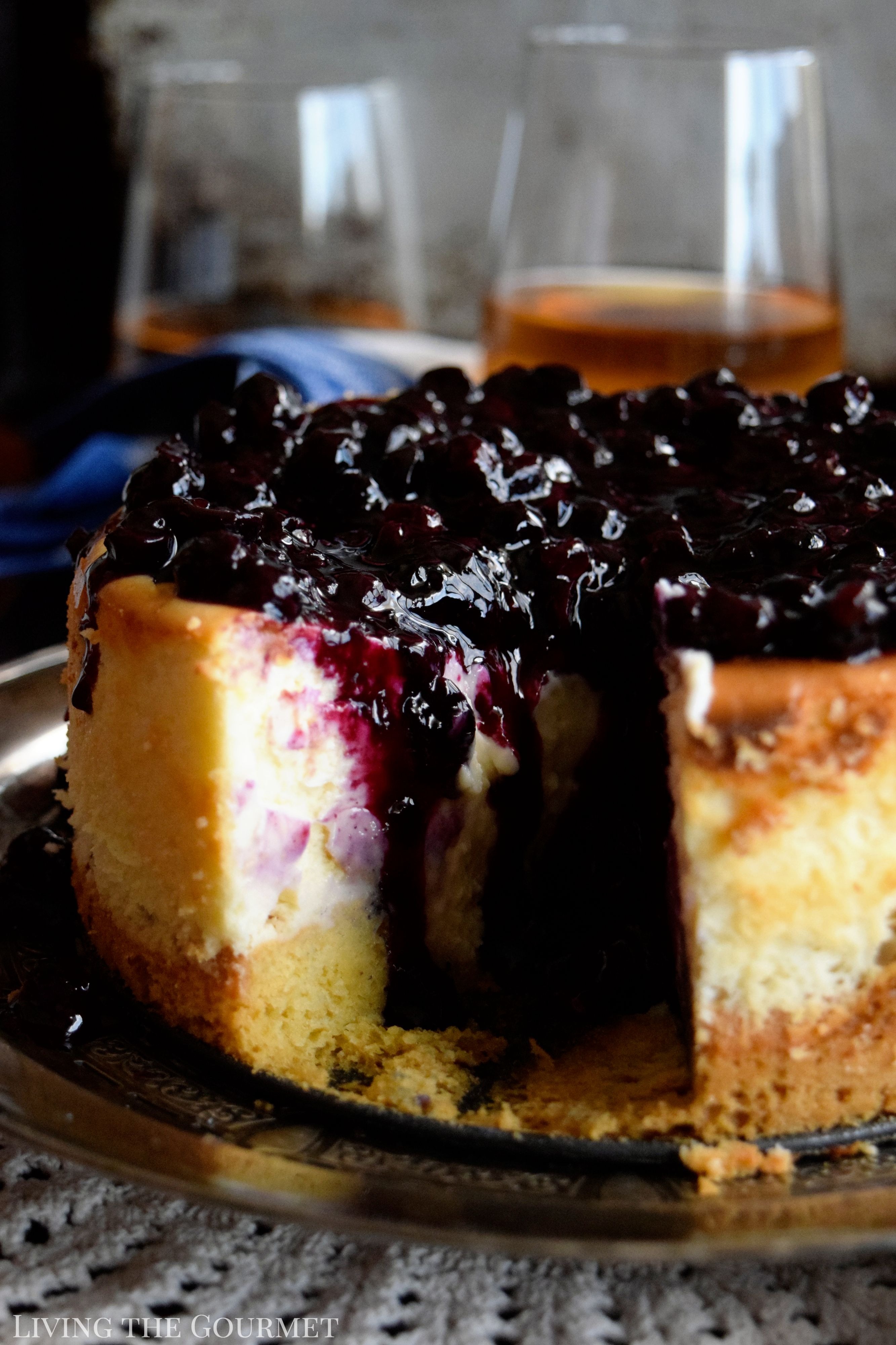 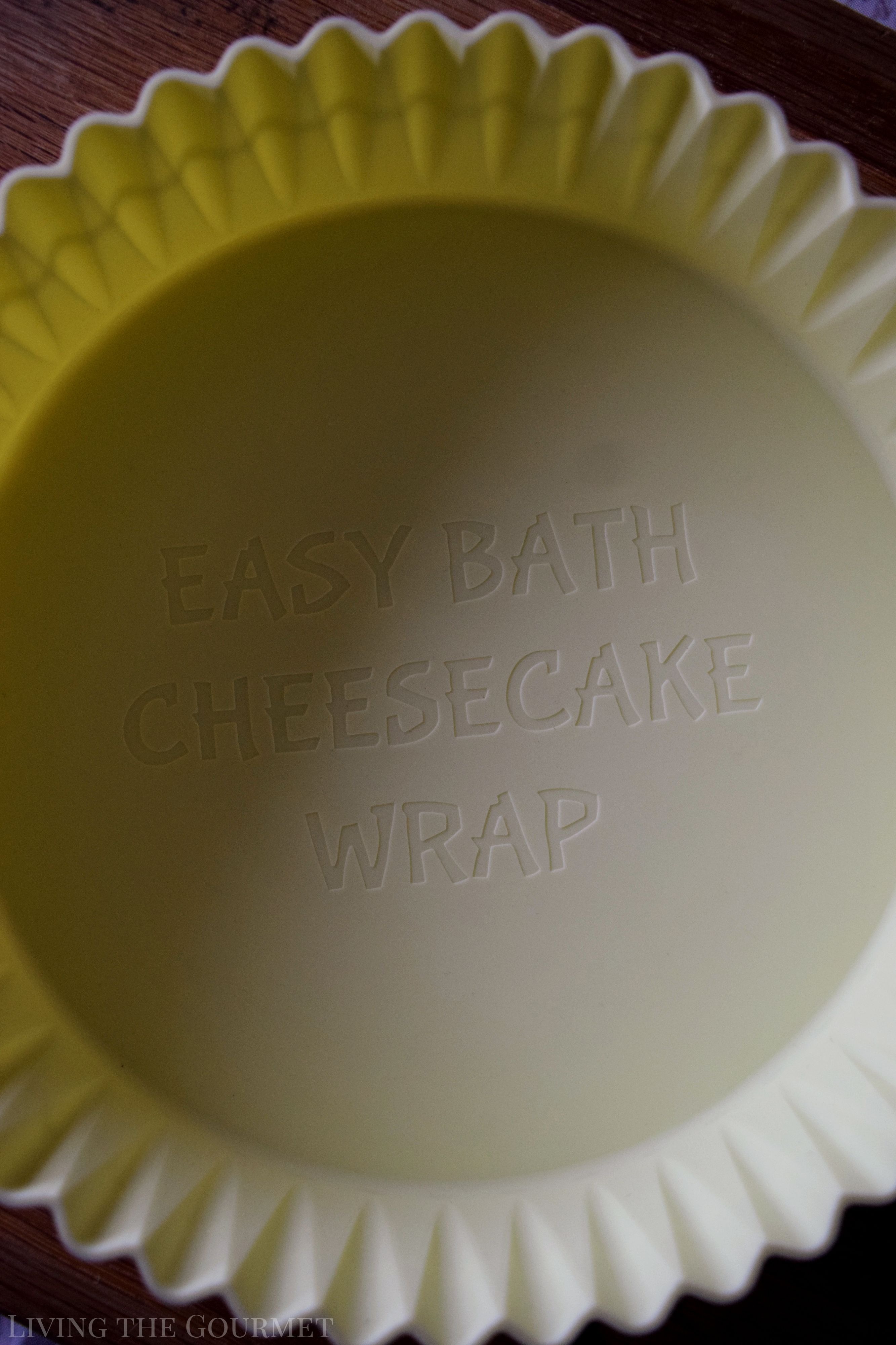 This is where my new piece of kitchen equipment comes in – the Easy Bath Cheesecake Wrap. In essence, this takes all of the mess and fuss out of using the water bath cooking method for your cheese cake. Simply slip this around the springform pan of your cheesecake, and then place it directly into the water bath. No mess, no fuss, it is reusable, oven-safe, and food grade. From the pictures below, you can see that this is a breeze to use and does exactly what it promises.

With the cheesecake in its water bath, bake for about forty minutes, or until it is slightly golden and middle only barely jiggles. Then simply remove the cake from the water and let it cool on a wire rack until room temperature. 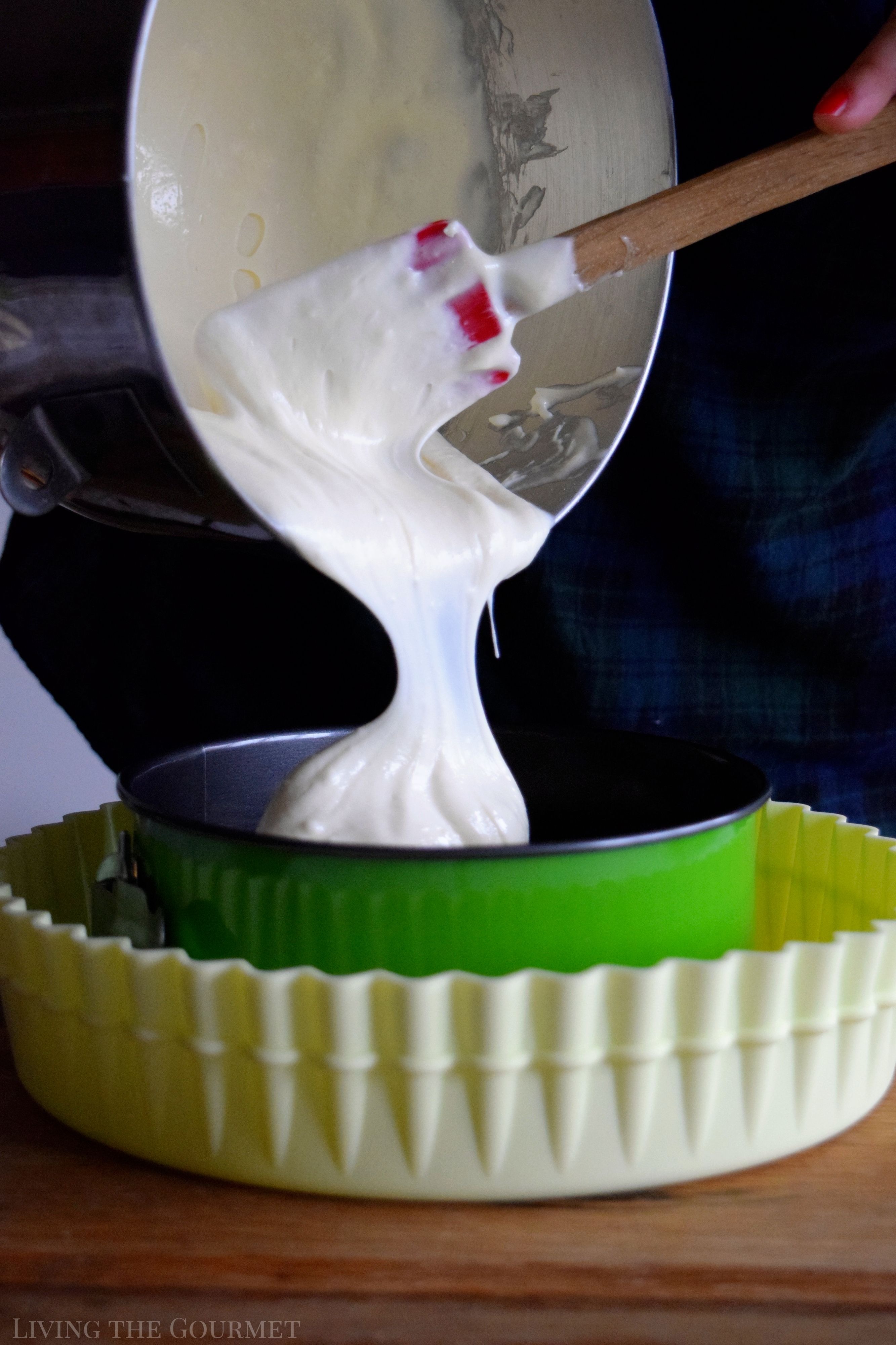 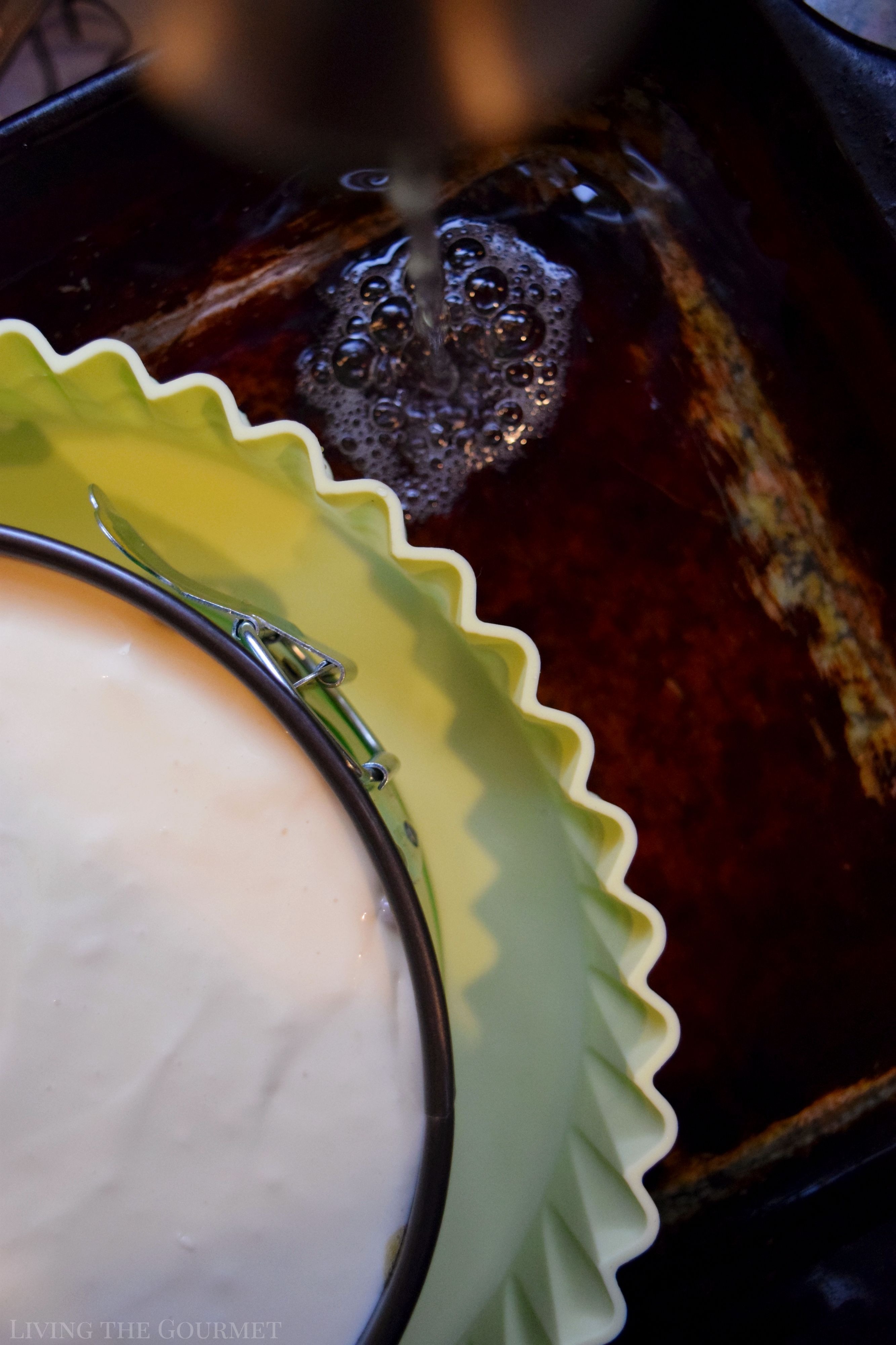 For the Lavender Blueberry Sauce: 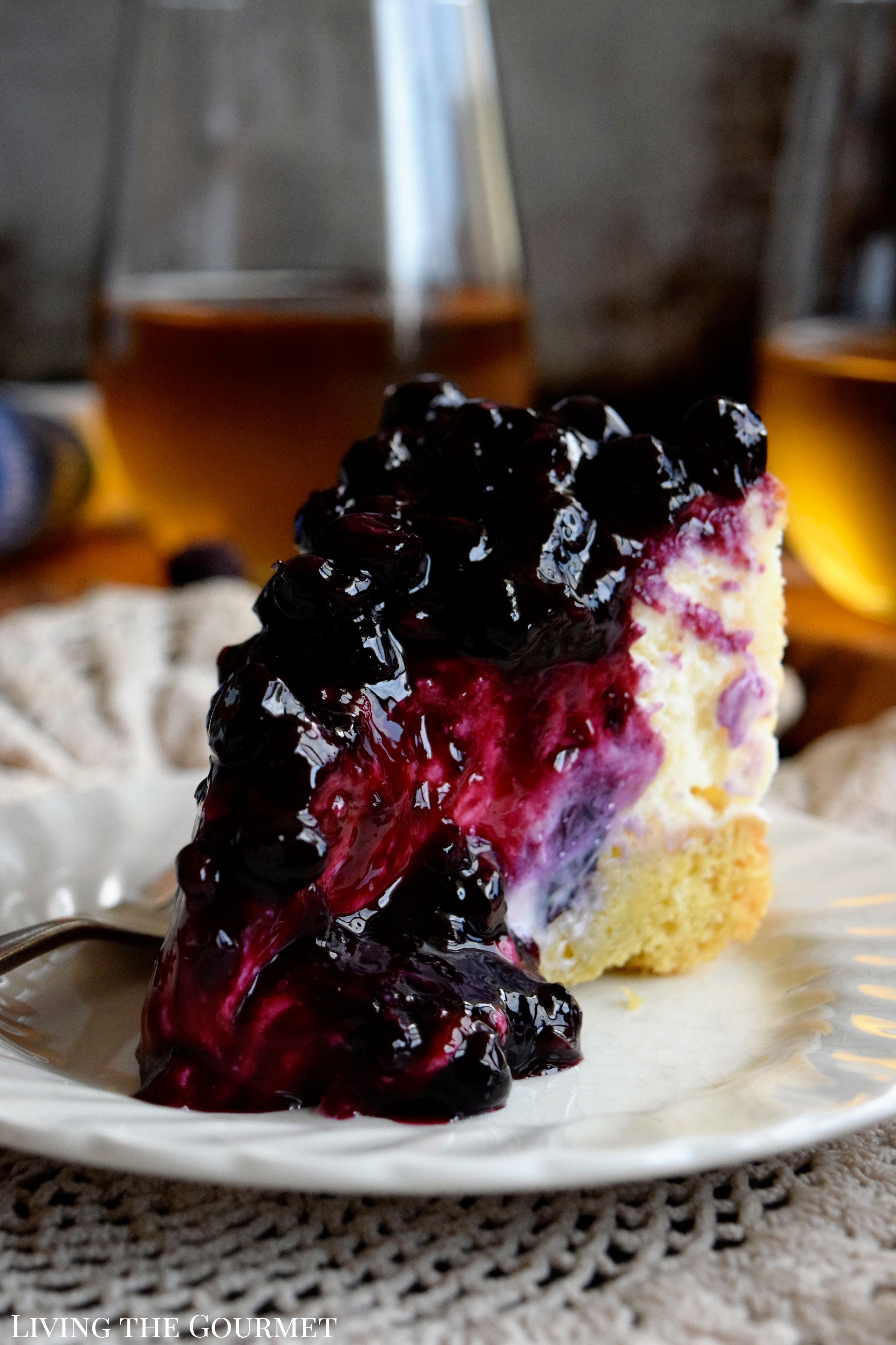 While the cake cools, prepare the Lavender Blueberry Sauce and top onto the cheesecake. Serve and Enjoy with Love!