Few things are more ‘classic’ than the Holidays, and today we’re preparing one of my favorite takes on the celebratory roast bird – Herb Crusted Turkey Breast. We’ll be pairing the turkey with latkes topped with sour cream, candied bacon and caviar, and we’ll be doing all of this with a little help from my friends over at McCormick®, more on them in just a bit.

We’ll be pairing today’s turkey with a side of latkes topped with sour cream,caviar, scallions, smoked salmon, and candied bacon – yes, I said ‘candied’ bacon. 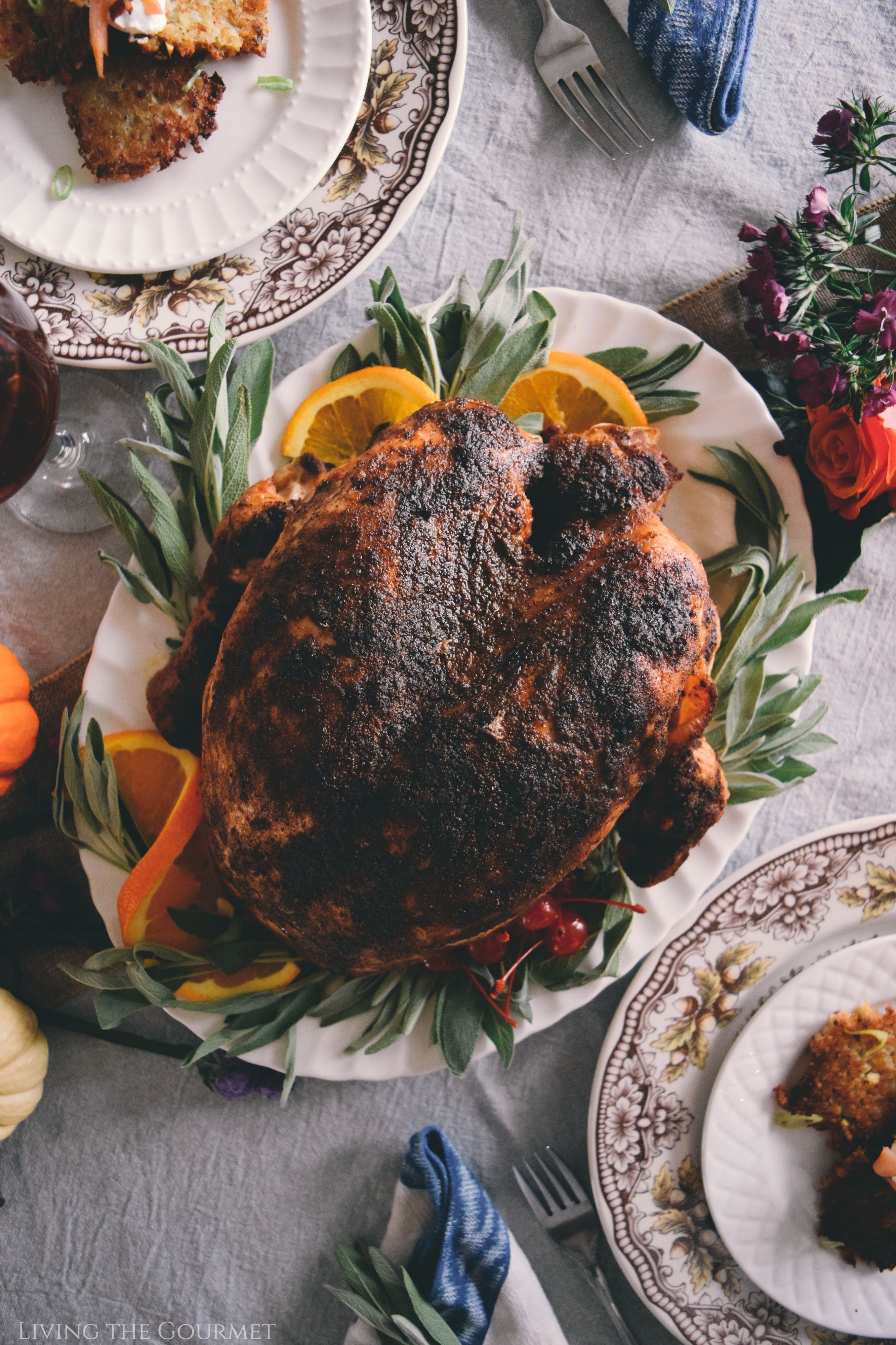 1) But why just the breast? While a whole turkey crusted in herbs is a case study in deliciousness, for a smaller get together, or simply a more refined or lighter meal, a roasted turkey breast will do just fine on its own, since a single decent sized turkey breast can comfortably feed up to about five people. Also, by opting to cook just the breast you’re skipping the intricacies of having to juggle fully cooking the dark meat of the legs and thighs without turning the white meat into a veritable desert that both you are your guests will avoid like a…well, like a desert detour on your way to juicy goodness of the dark meat.

2) McCormick® Herbs and Spices. Now, as you might imagine, I go through spices and herbs quickly – and in comparatively large quantities, and so while I love trying new things and experimenting, I want a brand of spices and herbs that I can rely on for quality, availability, and affordability, especially for the most important meals, and those special moments, such as the holidays, where the food I’m cooking is the center of attention. McCormick® fits that bill perfectly, since not only is restocking as simple as a run to my local Stop & Shop, but McCormick® is backed by over a hundred years of proven quality and reliability. For more information, head over to McCormick® Spices, to learn how McCormick® can help you ‘make it home’ for the holidays this season. 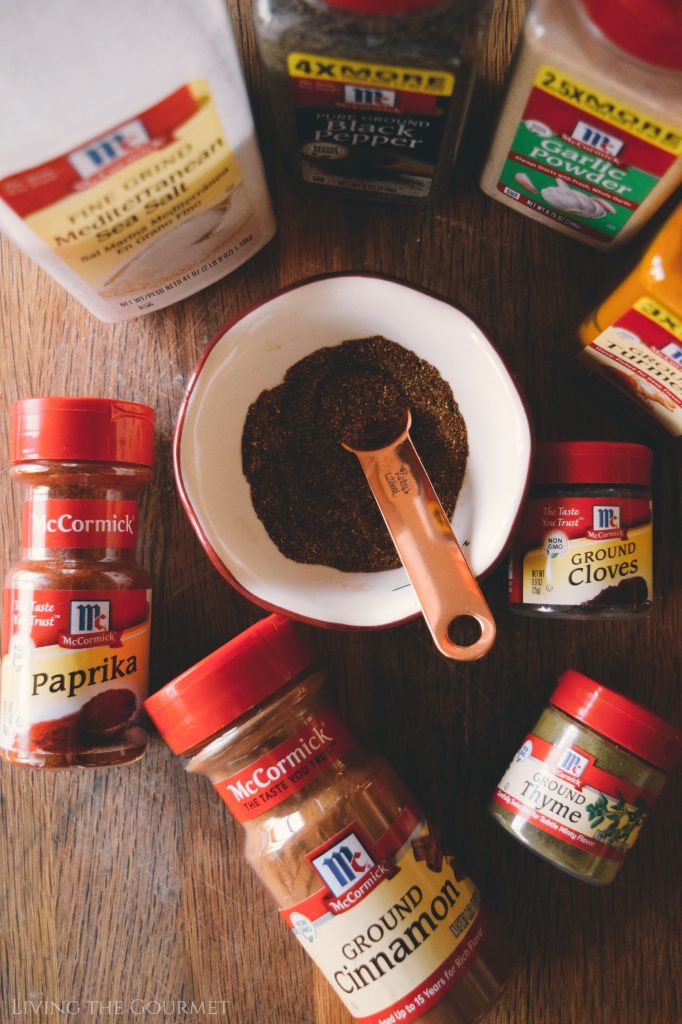 3) The Herb Crust. An herb crust provides more than just an outer shell of flavor that seeps into the meat of the turkey during cooking and slicing. On the contrary, the outer shell of herbs also provides a bit of added ‘crunch.’ Prepped in a butter paste, the herbs more or less ‘fry’ in the butter during cooking, crisping not only the herbs but also the skin on which the butter paste was spread. As a result, you have two layers of crunch, paired with a dense ‘crust’ of flavor.

4) The Herbs and Spices. Today’s herb crust is a combination of cloves, cinnamon, Mediterranean Sea Salt, Turmeric, Ground Thyme, Paprika, and Black Pepper. This gives the crust an earthy, slightly ‘warming’ rather than ‘spicy’ flavor profile, with the cloves and cinnamon providing familiar ‘holiday notes.’ However, as in all recipes, the quality of the ingredients is of the utmost importance, which is why I trust and use McCormick®. 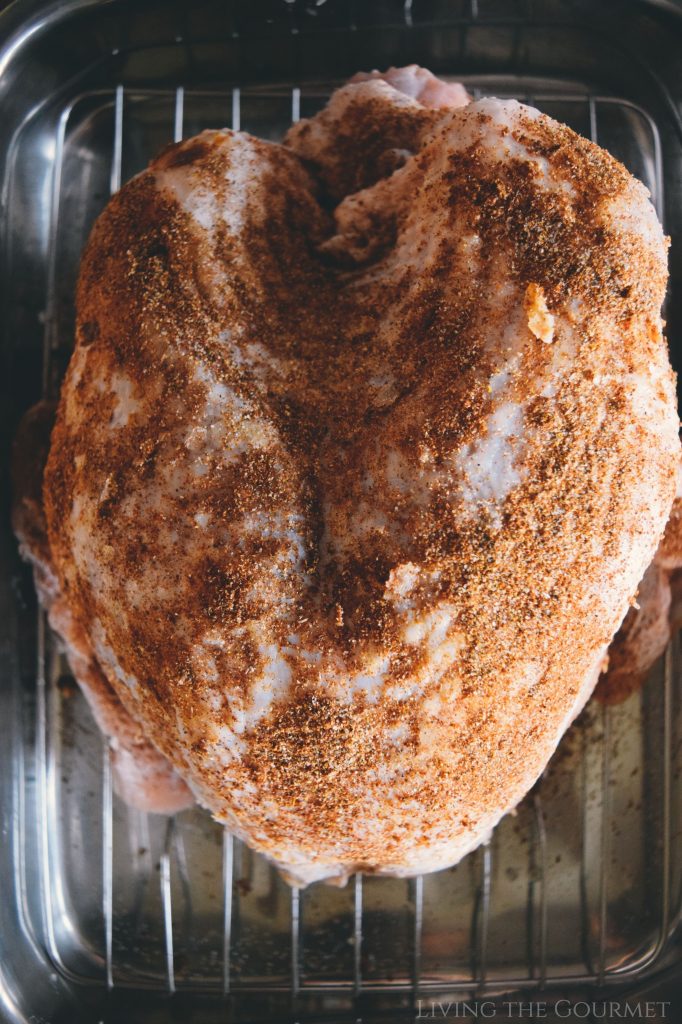 1) Timeframe. First things first, know when you plan on cooking the turkey. There is no shortcut for defrosting a frozen turkey, and a whole bird takes a solid couple of days to defrost – at roughly 18-24 hours per pound depending on the total size of the turkey, and roughly the same metrics apply to a turkey breast. If buying a ‘fresh’ or ‘refrigerated’ turkey, you are best advised to cook it within thirty-six hours for best results. Yes, fresh/refrigerated turkeys ‘can’ be set in the freezer for later if something should prevent you from cooking it right away.

2) Is ‘Grade A’ As Unimportant as Everyone Says? For years now, turkey buying guides have popularized the idea that the USDA Grade system is simply not important when buying a turkey, with the logic being that virtually all turkeys available to consumers are stamped ‘USDA Grade A,’ and that any defects in a commercially available turkey ‘not’ dubbed ‘Grade A’ are entirely superficial. Broadly speaking, the overall point ‘is’ true, but there are two key exceptions. First and foremost, the designation of ‘USDA Grade A’ informs you that the turkey you’re buying is free of broken bones, pinfeathers, bruises, and other such ‘superficial’ flaws. However, there are two flaws that could in fact impact your turkey – flesh cuts and skin gashes or skin detachments. Since a turkey can – and likely ‘will’ – bleed away juices via flesh cuts, this could lead to a noticeably dryer turkey than one marked ‘Grade A.’ Similarly, skin gashes or skin detachments can affect your ability to stuff herbs or spices beneath the damaged skin, depending on the extent of the damage. 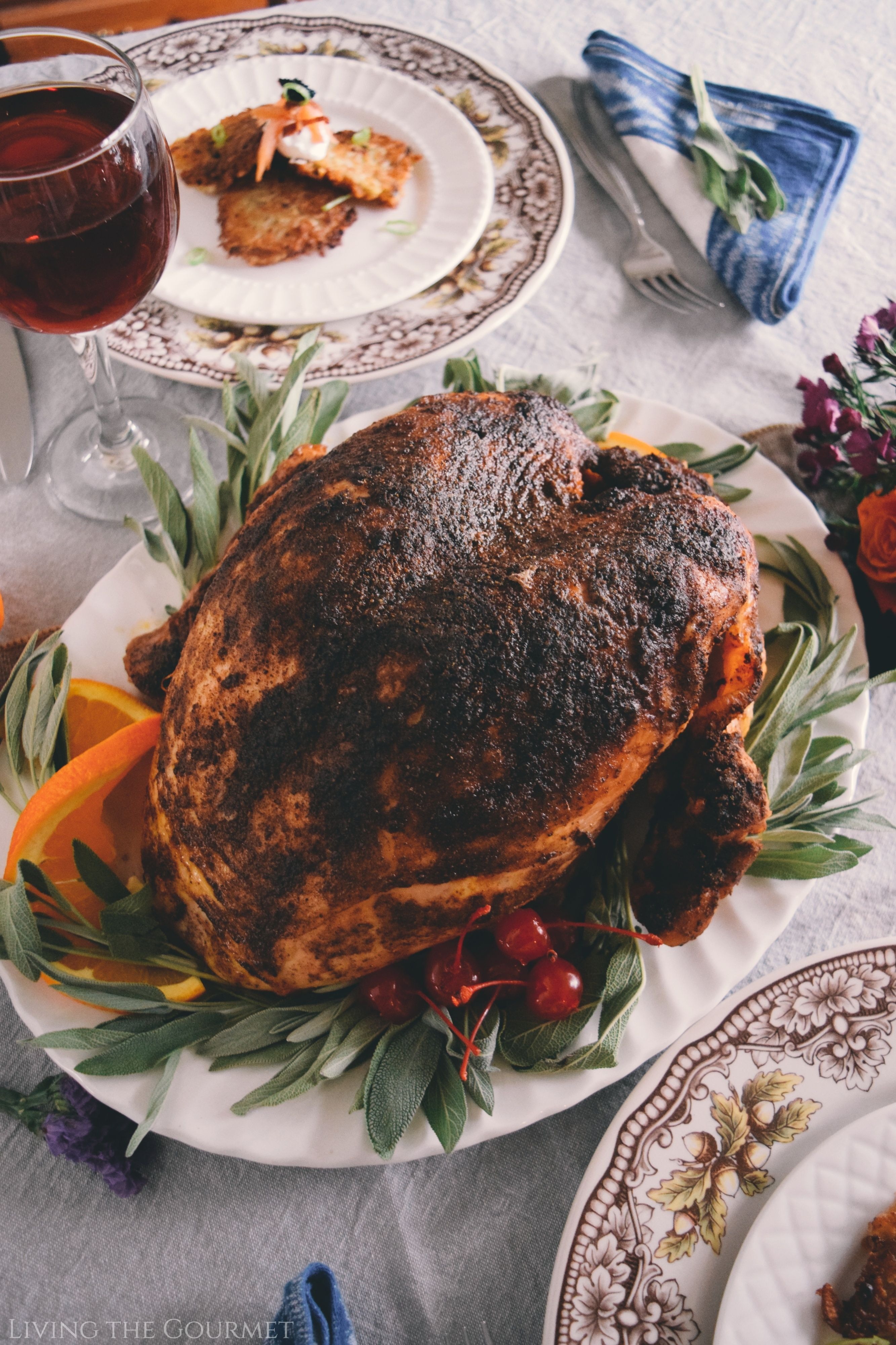 3) Size. As a rule of thumb, as with whole turkeys, plan on at least a pound per person. It’s always better to have leftovers than to run short during the party. And let’s be honest, leftover turkey is super versatile anyway.

4) Organic, Humane, and Hormone Free Labels. At least in the US, the “No Hormones Added” label is purely a marketing ploy, since hormones are not allowed in the raising of pork and poultry. Similarly, the ‘Humane’ label is also all about marketing, since there is no regulation, oversight, or guidelines as to what this label actually means. By contrast, a turkey labeled ‘Organic’ means that not only was the turkey never fed antibiotics, but also that the turkey was fed organic feed, and that the turkey had regular access to the outdoors. 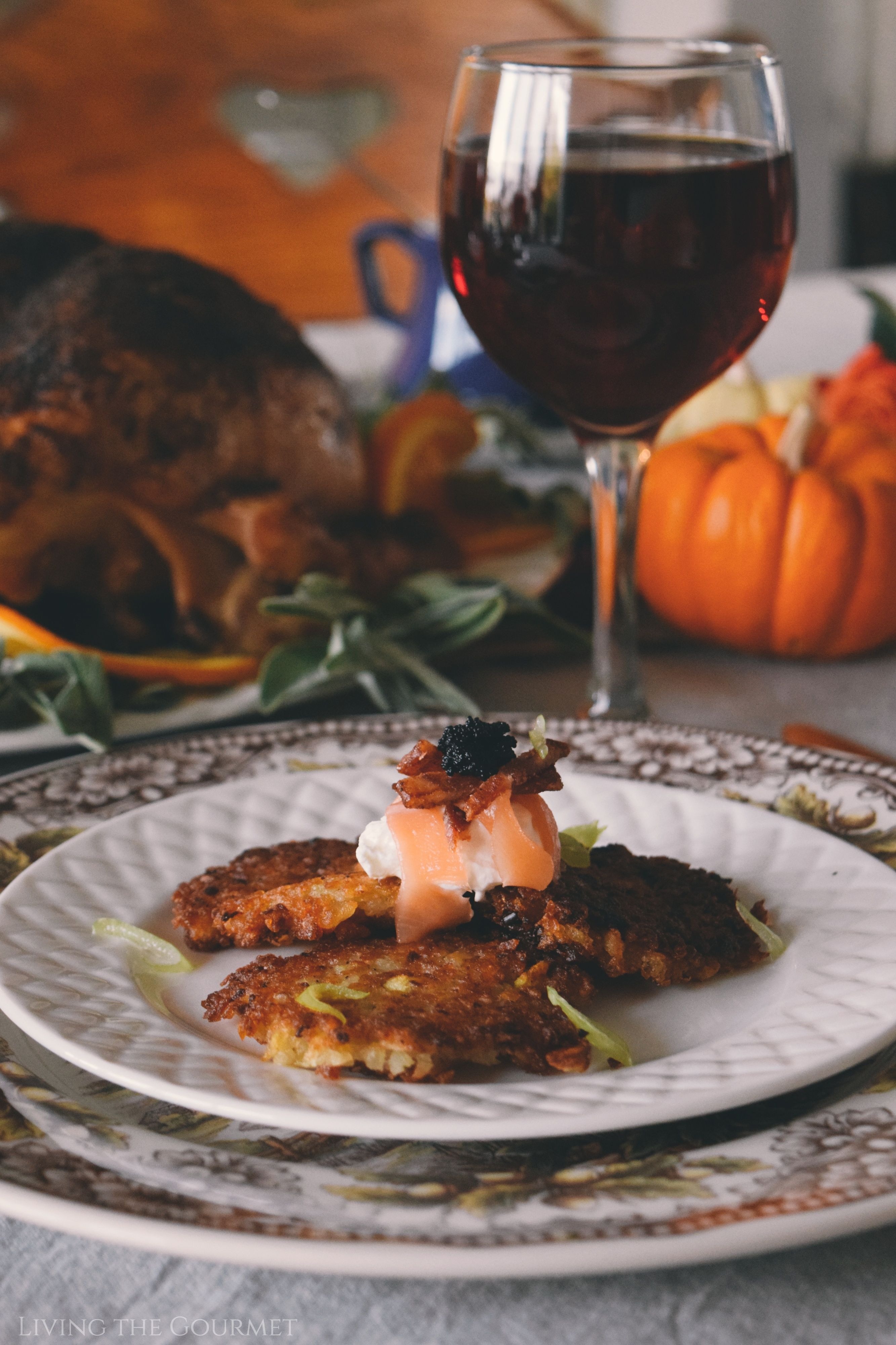 1) Latke vs Potato Pancake. Is there a difference? Yes and no. In North America, ‘potato pancake’ and ‘latke’ have come to be used interchangeably in most – but not all – circumstances. With that in mind, virtually every culture in Europe has some version of the ‘potato pancake,’ from Italian Fritelle di Patata which are typically thicker than others and crusted in parmesan, to Greek Polpetes which feature green onion, mint, and lemon juice, to German kartoffelpuffer, Irish boxty, Swedish rarakor, Polish placki, etc.. By contrast, latkes typically, though far from always, feature matzo meal as a binding agent, and may also feature yellow onions, chicken schmaltz, shredded rather than mashed potatoes, and are often served alongside sour cream or applesauce. Thus, yes, today’s potato pancake is indeed a latke.

2) Uses for Candied Bacon. As simple as dipping bacon in a mix of syrup, cinnamon, cloves and vanilla, and then baking the bacon in the oven…but what can you actually ‘do’ with the bacon, aside from eating it on its own? The possibilities are endless. Really, you can add candied bacon to anything where a smoky-sweet flavor and a touch of ‘fat’ would be desirable. No, seriously. Think vanilla ice cream, dark green salads with fruit, ‘bright’ sandwiches with things like greens, tomatoes, and ‘light’ meats such as turkey and chicken. 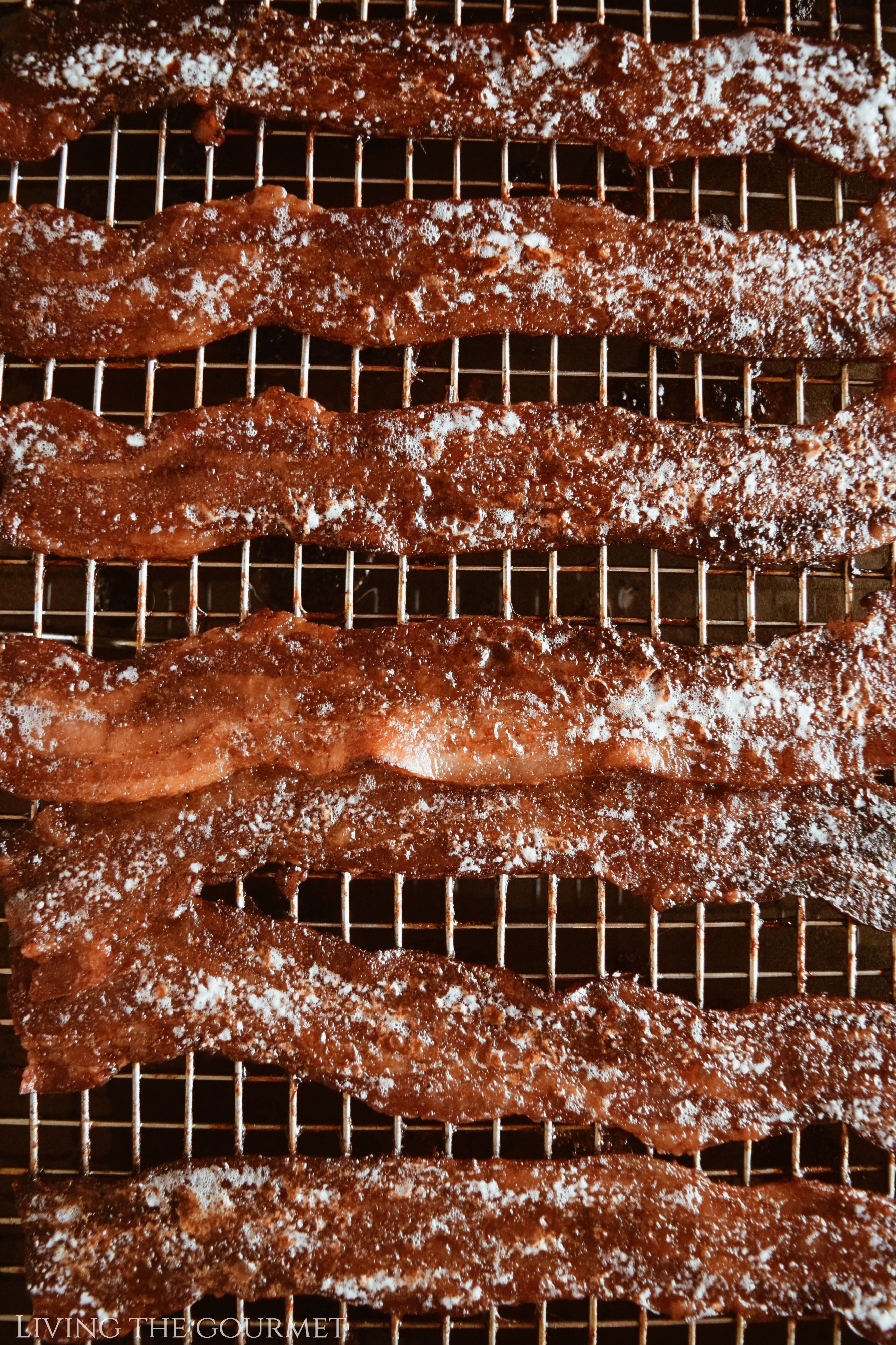 2) Mushroom and Tomato Stew. A greater starter to today’s turkey breast, this stew features all of the flavors of the season combined in a single bowl. 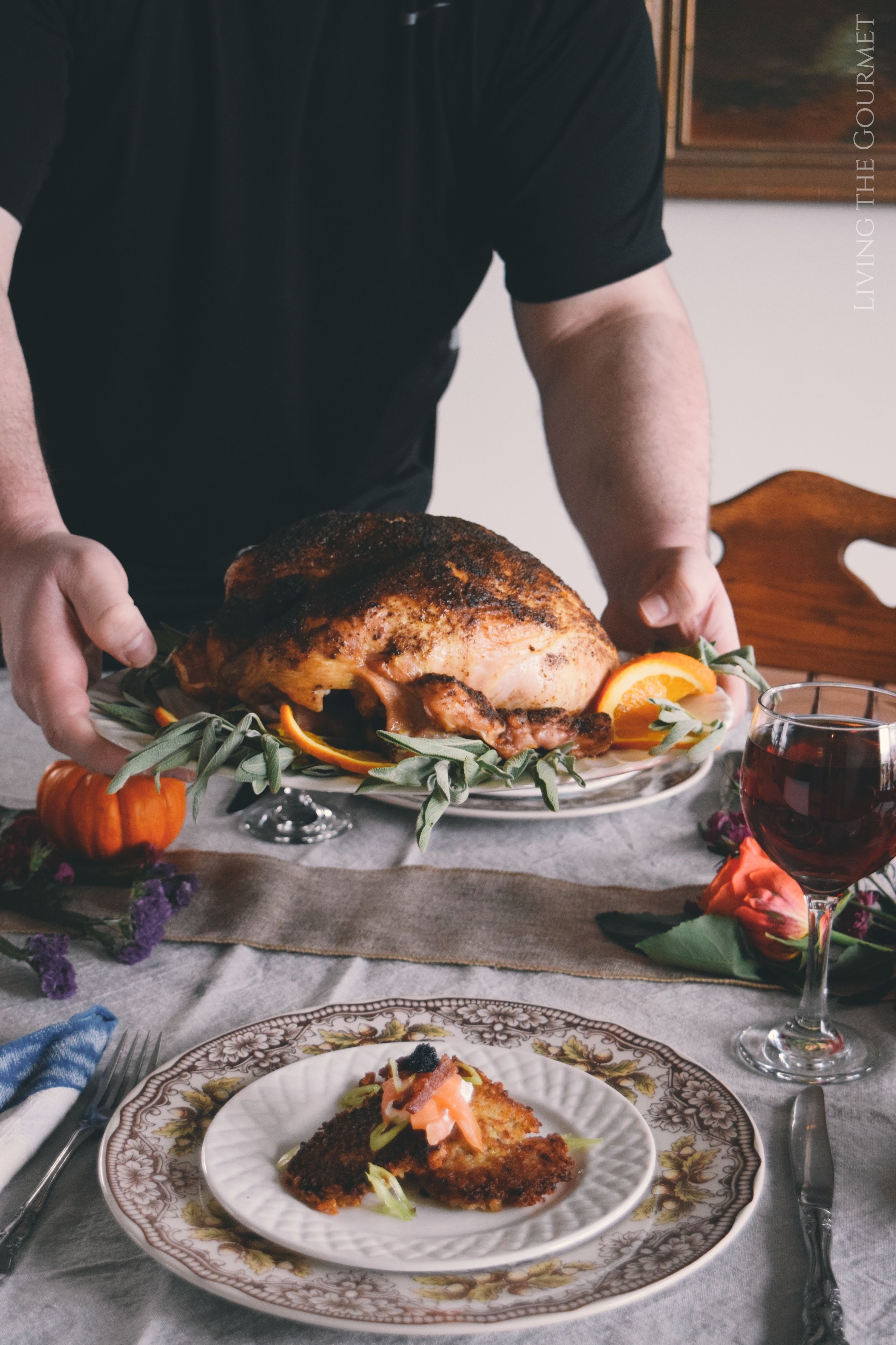 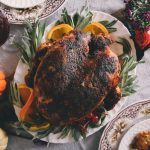 Garnish for the Latkes:

For the Candied Bacon:

For the Herb Crusted Turkey Breast:

For the Candied Bacon:

For the Herb Crusted Turkey Breast: 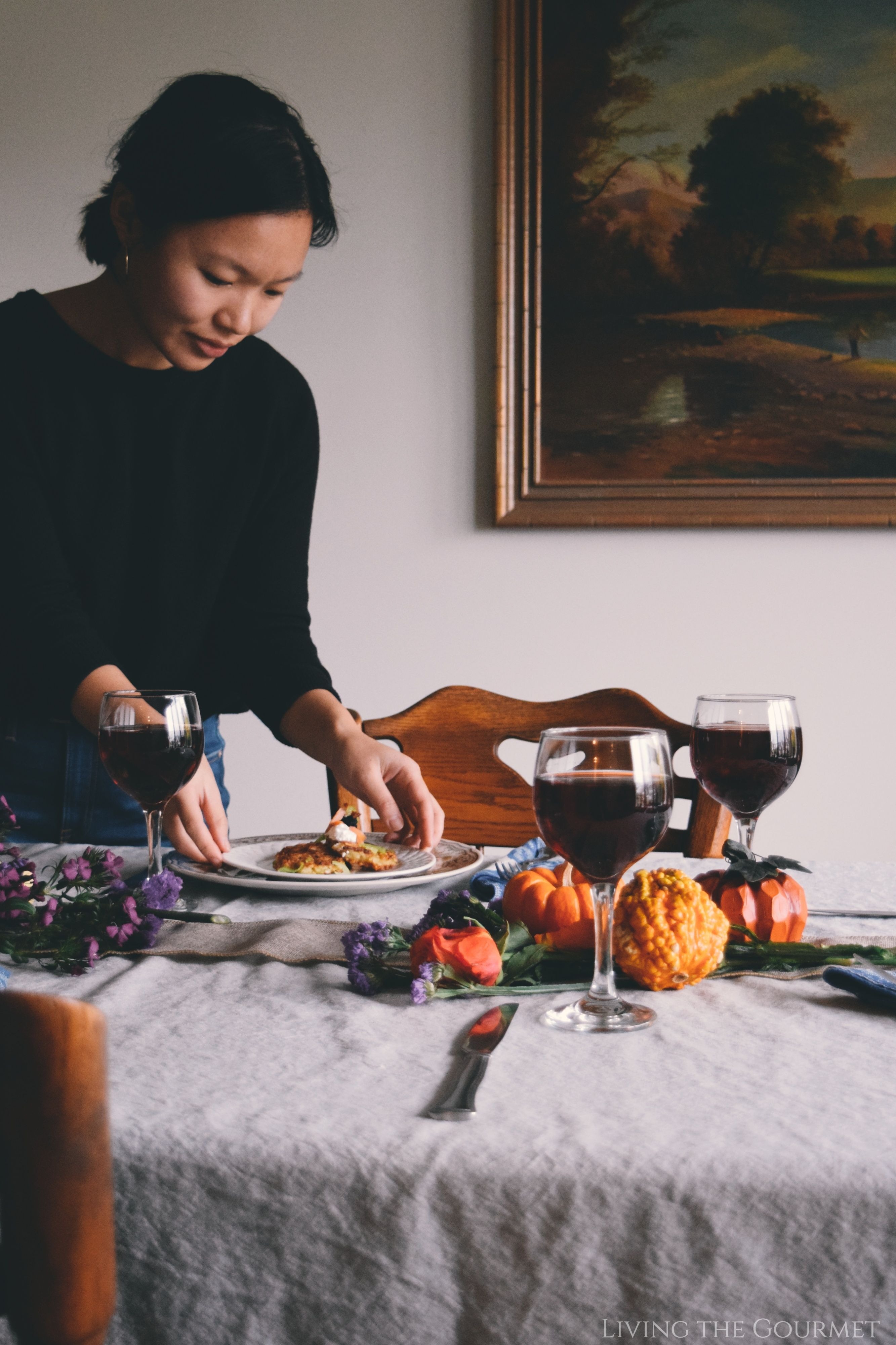 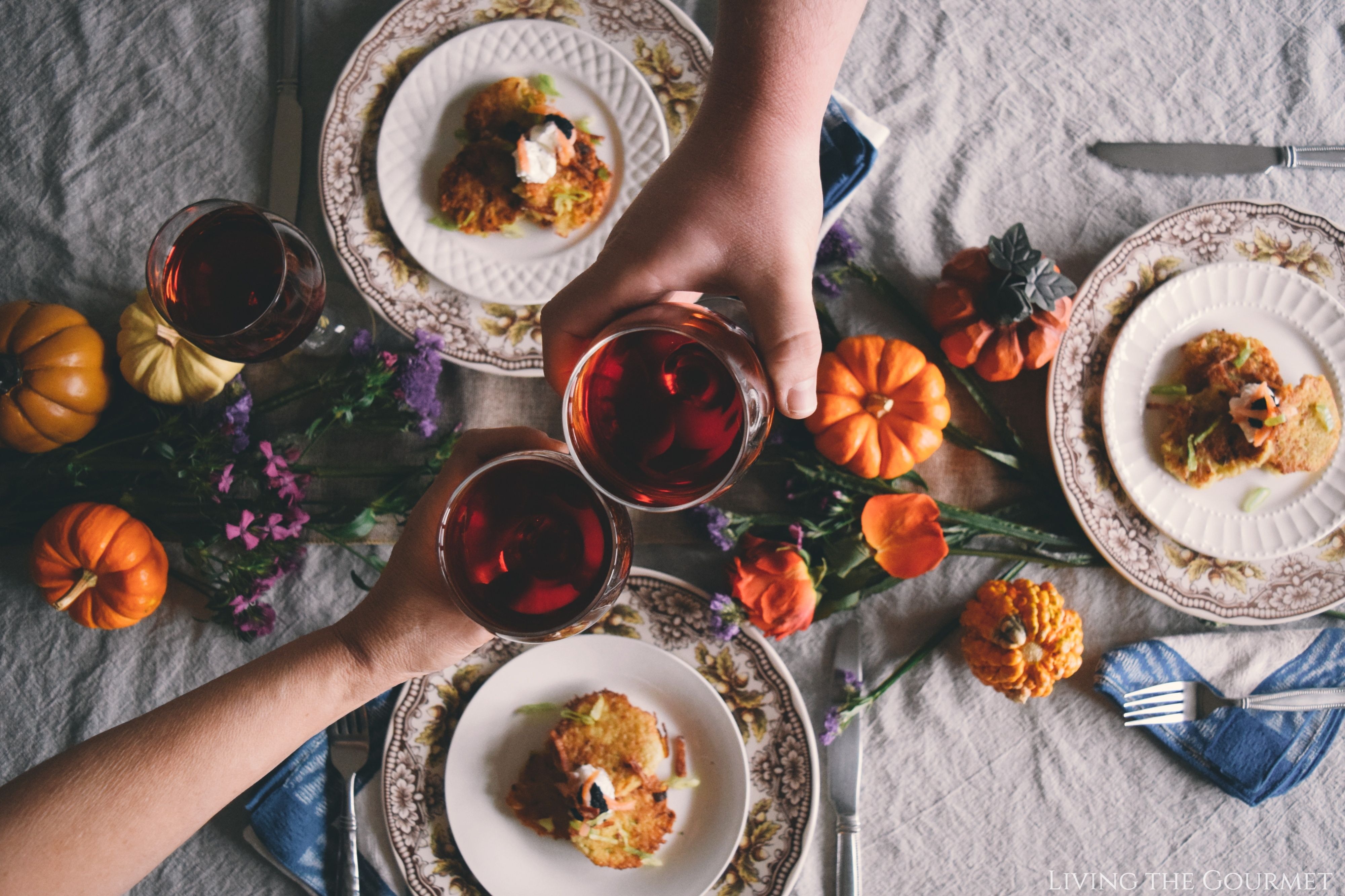