Hearty and satisfying, Sausage and Potatoes are a quintessential side to pasta or perfect on its own. However you choose to serve it, this dish is a year-round classic. 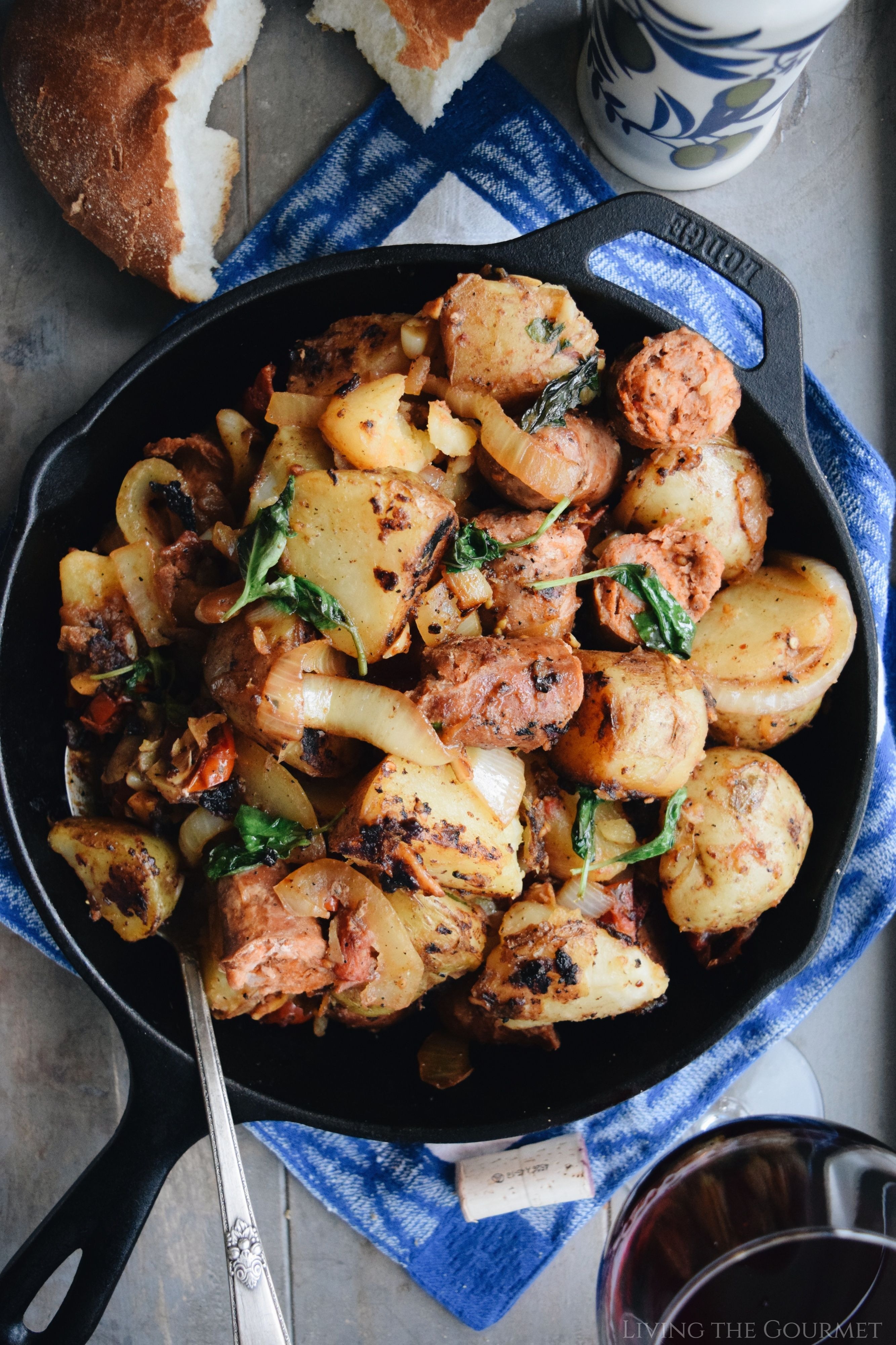 Over the years, I’ve enjoyed my fair share of the classic Italian-American ‘sausage and peppers,’ sometimes on its own, or over pasta, or on a nice chunk of Italian bread. Today, however, it’s time for something bit more “Provençal” – Sausage and Potatoes. The base of this dish is almost exactly what it sounds like, but with a few key additions that make its Provence origins all but unmistakable.

Hardy and warming, but light enough to be enjoyed in the warmer weather under the sun, this dish is truly the definition of a year-round favorite, combining sausages and potatoes with fresh basil, fresh tomatoes, sweet onions, and plenty of garlic.

Why You’ll Love This Recipe: 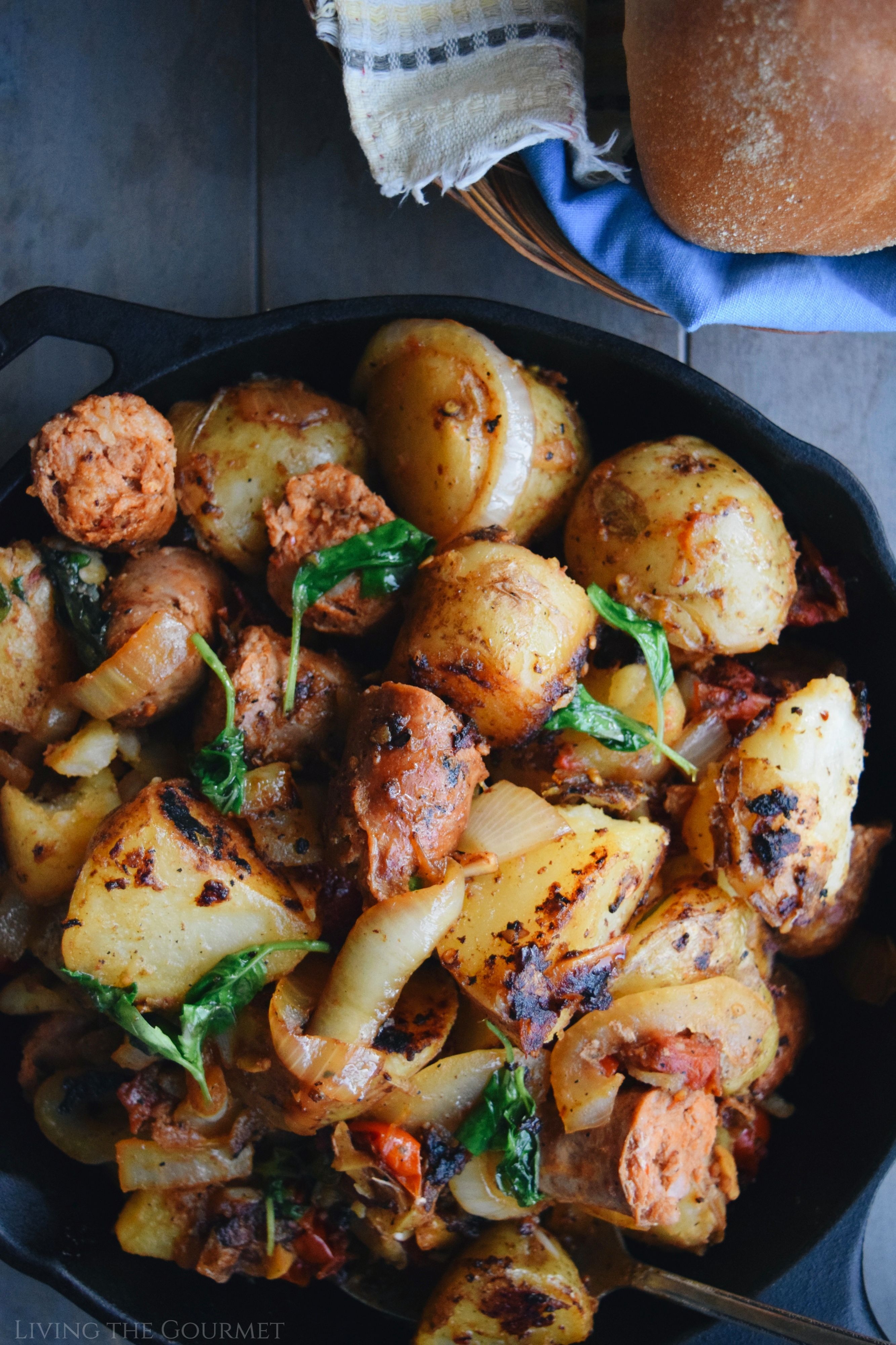 1) All Year Round. As mentioned above, this dish can be served any time of year. It’s hardy and warming in the winter, but light enough to serve as a satisfying meal during the warmer months, meaning this is a recipe that you keep in the back of your mind for ‘whenever’ you like.

2) A Meal In Itself. While perhaps a bit less intuitive than the more common sausage and peppers, sausage and potatoes can be a main course entirely on its own, perhaps with a side salad or warmed greens, or even something like an onion soup.

3) Simple Gourmet. This dish, at least for me, embodies elegant simplicity. From its collage of rustic flavors, to its ease of preparation, to its simple beauty on the plate, this is one of those dishes that encapsulates the essence of “simple gourmet.”

4) Make Ahead. This dish can easily be prepared a day or two ahead of time, and then warmed up in a cast iron pan with some olive oil. In fact, letting the potatoes and sausages sit in the sauce will only enhance their flavor.

The Ingredients – Tips and Suggestions 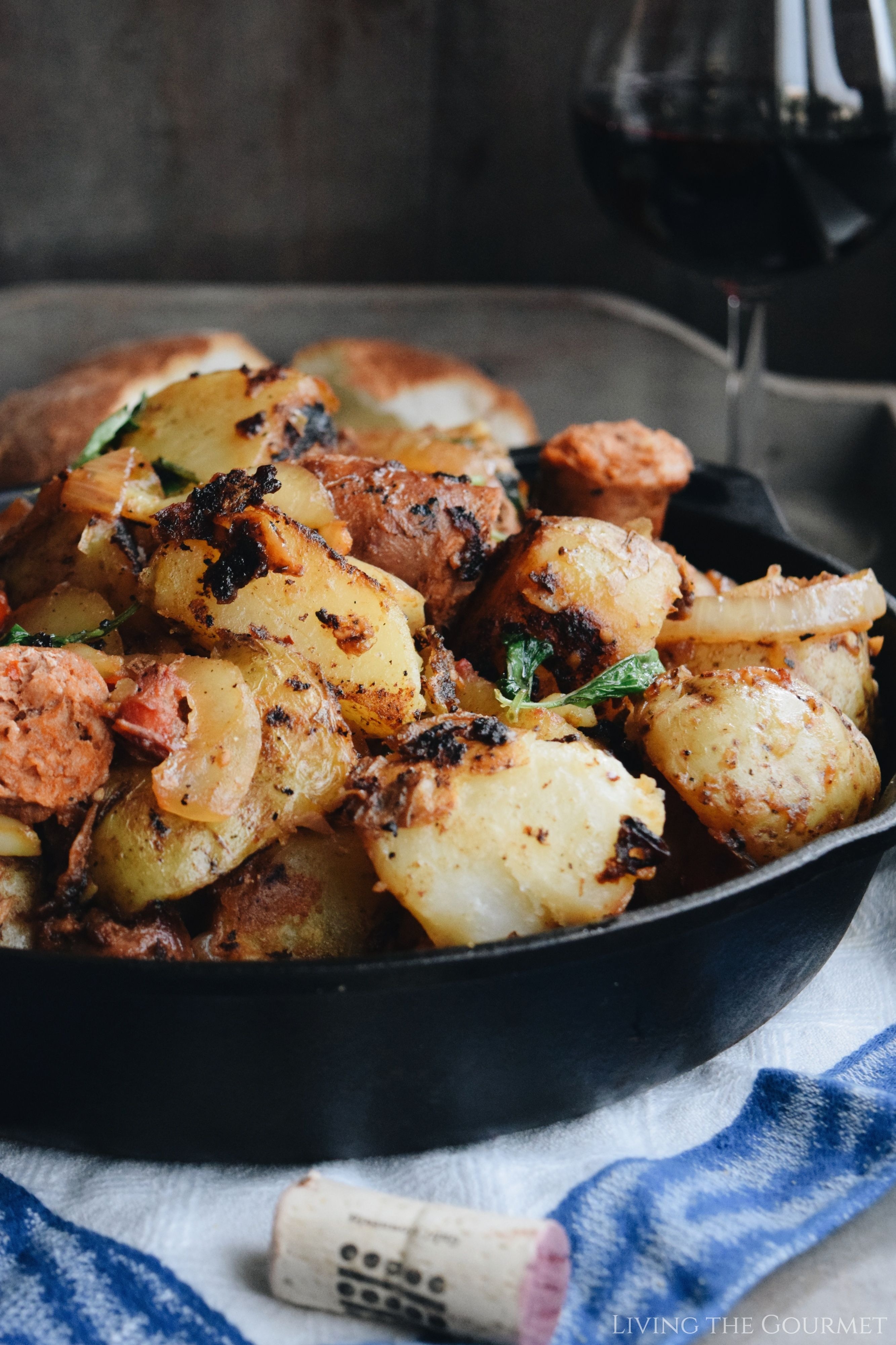 I’ll admit there’s not a whole lot to say here, but I do have two key points I want to get across.

1) The Potatoes: Any potato that can hold its shape after boiling is a candidate for today’s recipe. Yukon Gold, Russets, Round Reds, and Round Whites, would all fit that bill rather nicely. If you’re looking to be fancy, consider using a mix of potatoes.

2) The Tomatoes: I opted for cherry tomatoes largely because I like how they retain their shape during the cooking process, whereas sliced standard tomatoes would turn a bit ‘mushy’ and change the aesthetic that I was going for, as well as add a bit more ‘water’ to the recipe than I wanted. However, if you’re not worried about that, feel free to use your tomato of preference since the flavor remains the same.

If You Liked This Recipe: 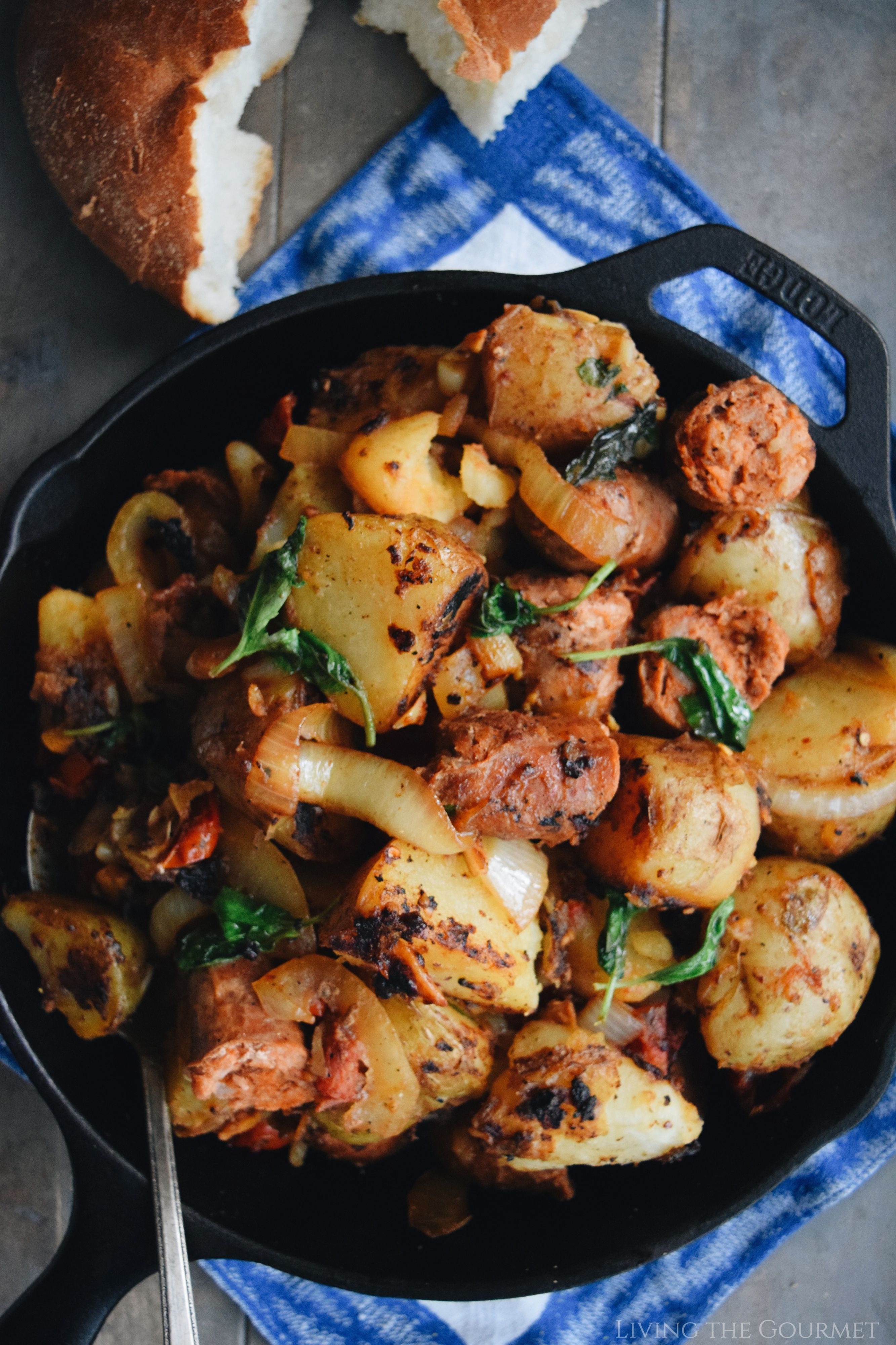 If you liked today’s recipe, consider trying out a few of my favorites listed below.

1) Sausage and Peppers. I mentioned sausage and peppers earlier, and here’s a link to my favorite version of that classic Italian American recipe.

2) Potato Soup. I know, potatoes with potatoes is a no-no, but trust me on this. This potato leek soup would be absolutely heartwarming pairing.

3) Summer Eggplant Salad. If serving this during the warmer months, you absolutely have to try it with this summer eggplant salad for some added ‘freshness’ and ‘crispness’ to complement the warmer weather. 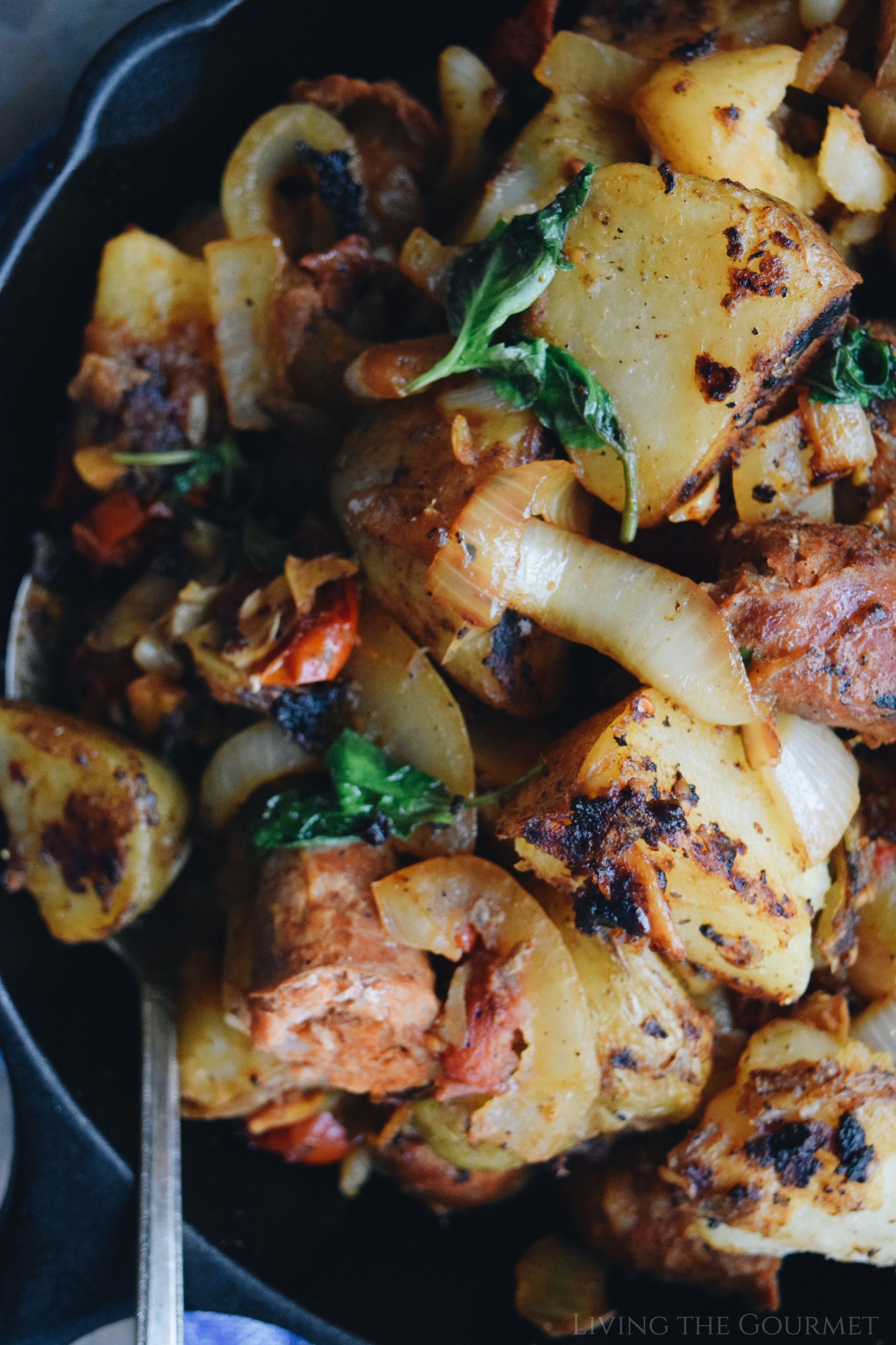