This post was sponsored by Better Than Bouillon as part of an Influencer Activation for Influence Central and all opinions expressed in my post are my own.

Today we’re preparing a Top Round Beef Roast, which we’ll be topping with a thick brown gravy. This classic combination is perfect for small holiday gatherings or as a satisfying Sunday dinner.  This recipe is shockingly easy to pull together, and a delight for senses.

We’ll be putting together today’s roast with a little help from our new friends over at Better Than Bouillon, but more on them in just a second.

Top Round Roast – A Brief Primer

Top Round Roast comes from the ‘round’ of the cow, which is the hind area just above the shanks. This area of the cow is used for movement and support, and thus is under constant ‘tension’ when the cow is standing still, and receives exercise whenever the cow moves. Thus, the area tends to contain very, very little fat, while the ‘muscle meat’ tends to be very well developed. This leads to the area being tough (developed muscles), and being short on flavor (low fat), in comparison to other areas of the cow. However, this also has the effect of the making the meat perfect for ‘low and slow’ roasting. Regardless, there are a few ways to get around the meat’s general toughness and lack of fat. The first and most common method is to rub the roast down – thoroughly – with butter. This has the effect of introducing ‘fat’ into the roast, which it lacks naturally on its own, whilst also giving the outside of the roast just a hint of crispness during roasting. The second method is what we’re doing today, which to blend together oil and herbs, and then rub the roast down with that. While this doesn’t add quite as much ‘fat’ back into the roast, it does make for a much more flavorful roast, in my opinion.

Ingredient Checklist for the Rub

Ingredient Checklist for the Gravy

Pairing a Top Round Roast

Herbed Top Round Roast with Gravy 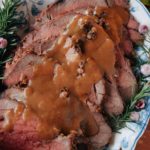 For the roast & rub: