This post has been sponsored by Pacific Foods, however, all opinions expressed are my own.

Chicken and Gravy is getting a makeover with this dairy-free version. Sweet notes of vanilla and cashews play into the savory flavors of rosemary and sauteed shiitake mushrooms for a gourmet twist. 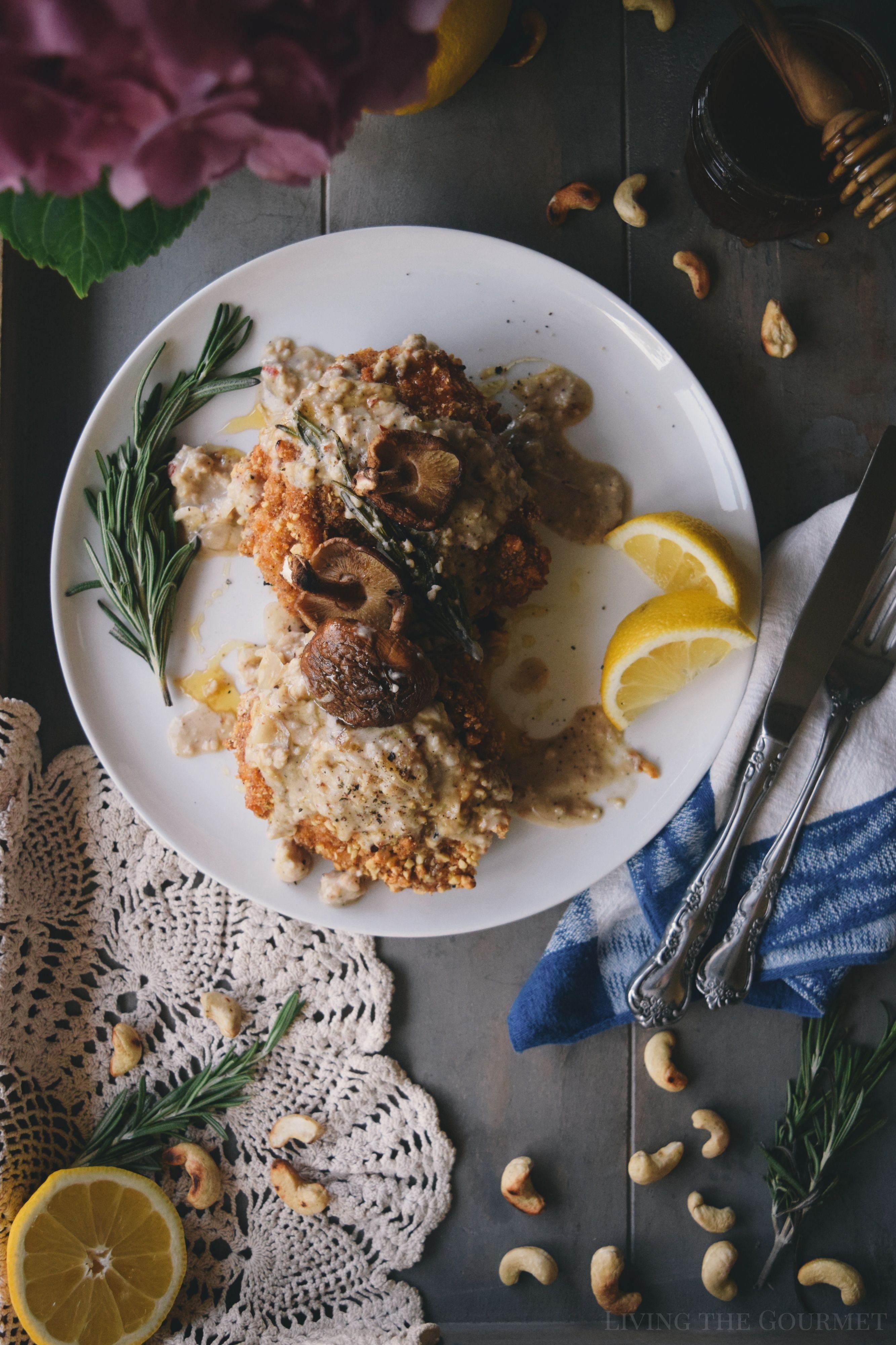 We’re all familiar with Aesop’s warning that “Looks can be deceiving,” or the with sentiment from Virgil warning us “Do not trust in appearances.” A fair fewer will remember the words of Anaxagoras, who offered us the insight that “Appearances are but a glimpse of the unseen,” as if to say “Reach beyond what you can see,” or that “Appearances are rarely the whole story.” 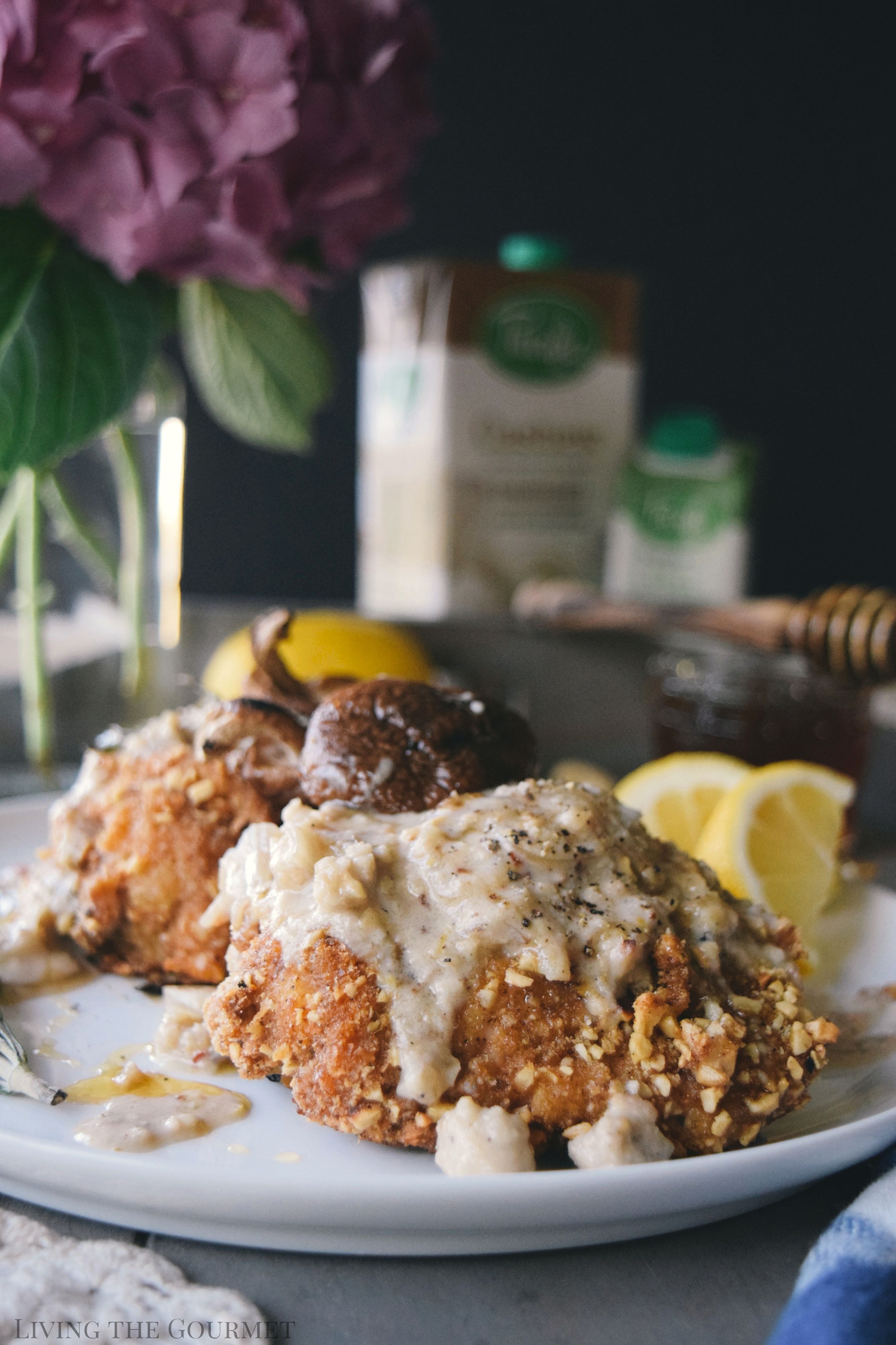 In the culinary world, this advice is not only ‘wise’ but also has vast practical applications as well. For example, my father was a butcher and later went on to draw up blueprints for various food and food-related establishments. As such, going ‘out’ to eat was a relatively rare occurrence for the simple reason that he was intimately aware of the ‘behind scenes’ of commercial kitchens. Some of the advice or rather ‘parental commends’ that I received when we did go out ran along the lines of “Order the lobster, whole,” or a similarly whole steak or piece of meat because there was no way to ‘fake’ them. Ordering a burger, for example, was simply out of the question, because the chefs could stretch the chop meat with ‘product,’ or ‘brush up’ its appearances with blood or even coloring, and you’d never know it.

In other words, appearances could be, and often were, deceiving. One of Napoleon’s ‘great’ reforms, for example, was instituting harsh punishments for bakers or mill-owners who ‘stretched’ or ‘freshened’ flour with…wait for it…chalk dust.

Today, whole sections of the culinary industry are built on the ideas of products being ‘natural,’ ‘whole,’ or ‘clean.’ The reasons for this are rather obvious – we’re simply more aware of what we’re putting in our bodies, and demand that producers be similarly aware. 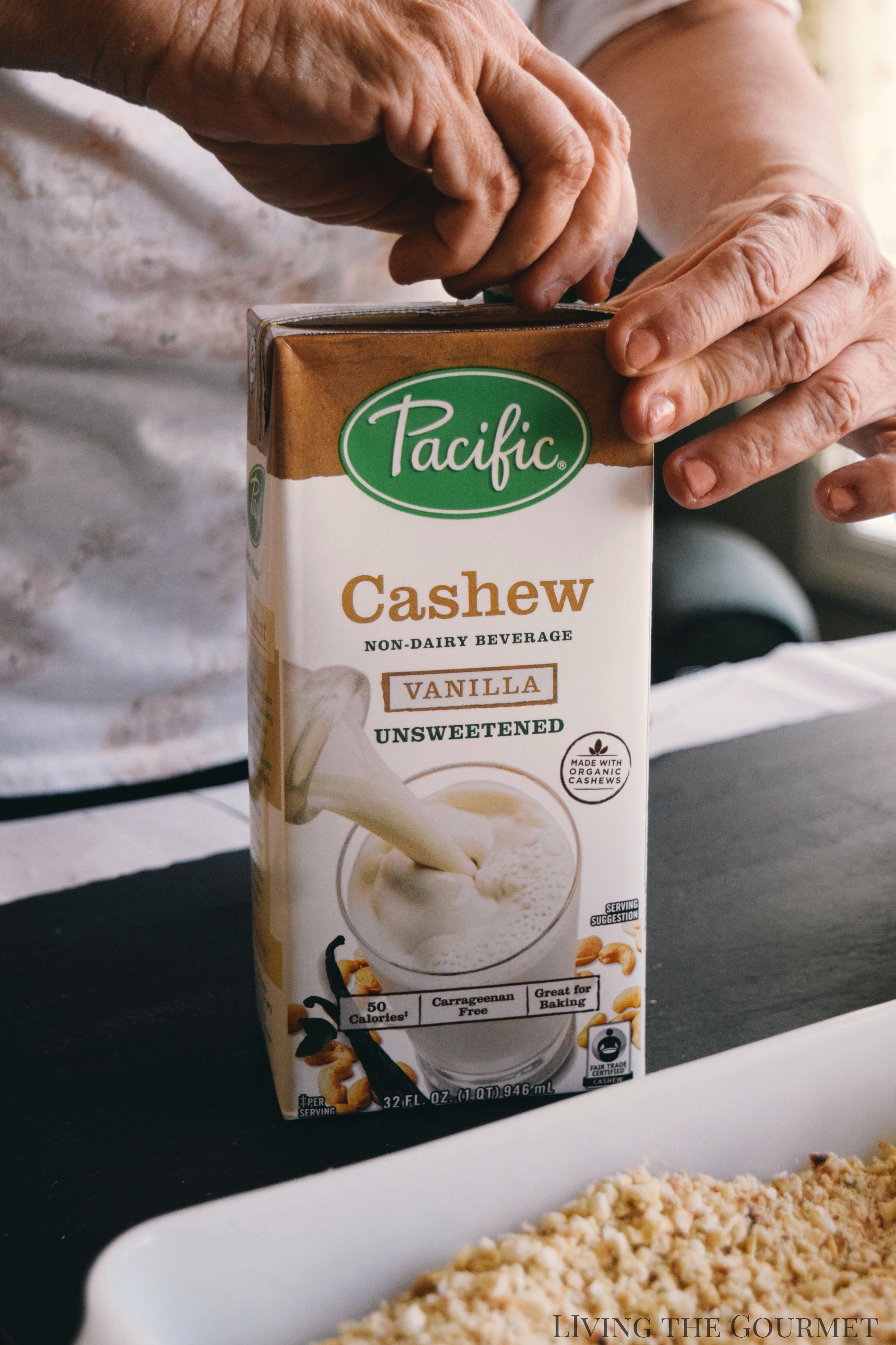 Naturally, that brings us to today’s product – Pacific Foods Cashew Unsweeted Vanilla Non-Dairy Beverage, which is a non-dairy beverage that’s made with Fair Trade Certified organic cashews, in addition, the product is gluten-free, vegan, as well as soy, dairy, and carrageenan free – making it about as natural as natural gets. The beverage is available in 32oz and 8oz cartons, as well as in other varieties including Almond, Coconut, Hazelnut, Soy, Rice, Oat, and Hemp. 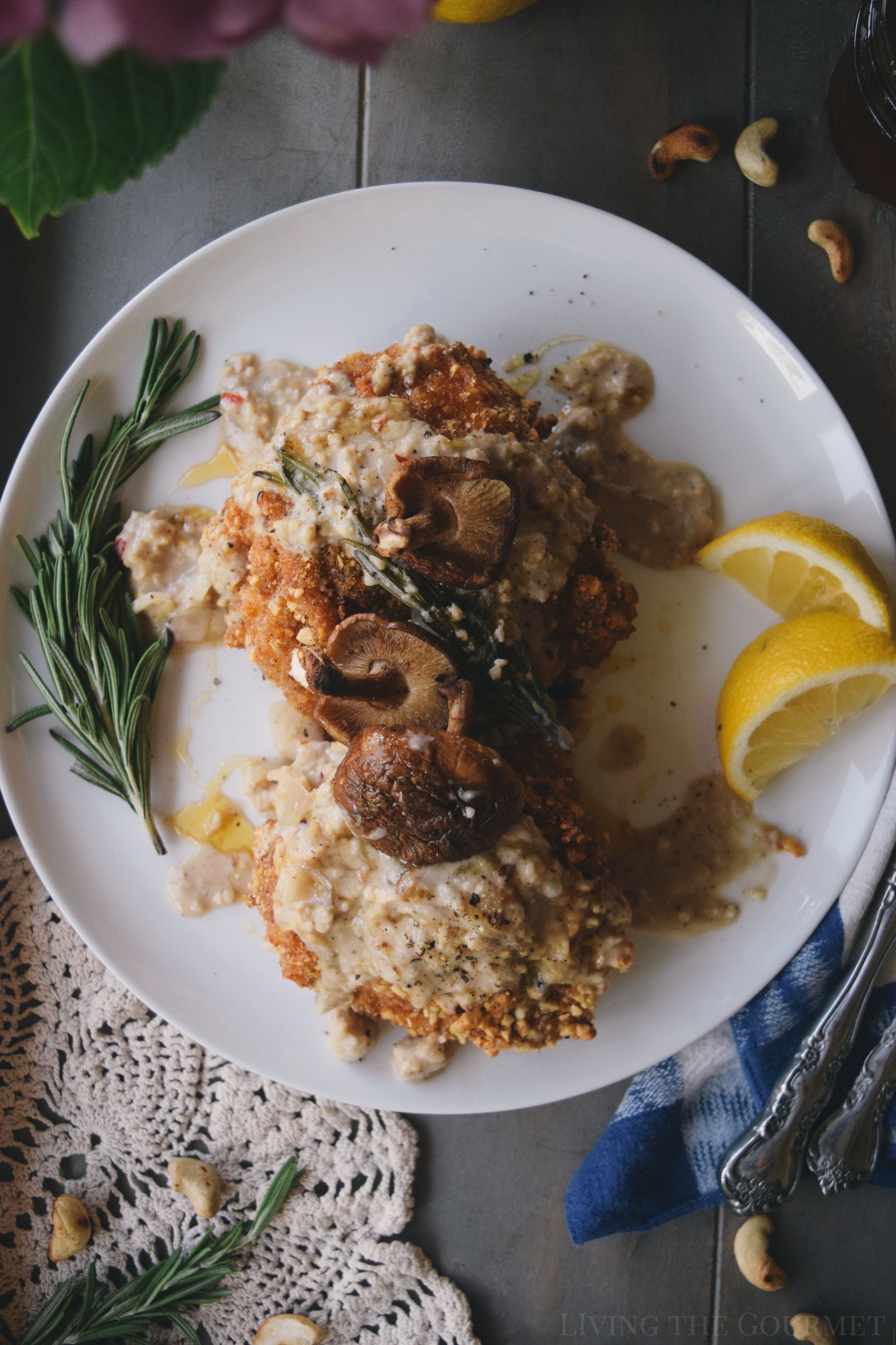 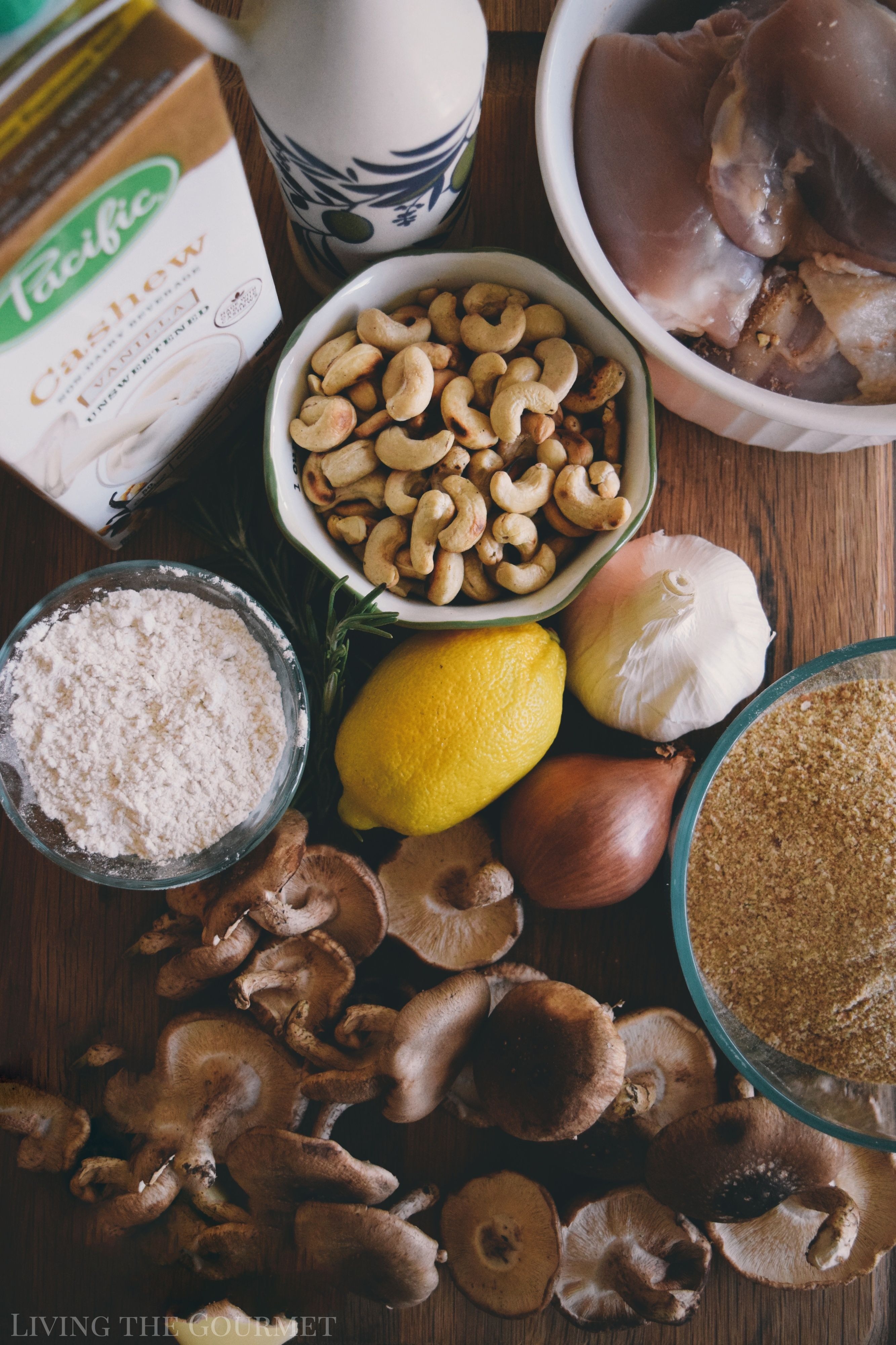 After that, set the prepared chicken in a baking dish, and drizzle with olive oil. Then bake until they turn a nice golden color, and juices from the chicken run clear. The baking time should be about forty-five to fifty minutes.

Once that’s done, it’s time to start on the gravy. We begin by heating a large cast iron frying pan, and the setting the cashews in dry to toast lightly. After that’s done, reserve a small portion of the cashews and set them aside for garnish later.

For the bulk of the cashews, we’re going to set those in a processor and give them a few good pulses. We don’t want them finely ground or powdered, let them remain slightly chunky instead. 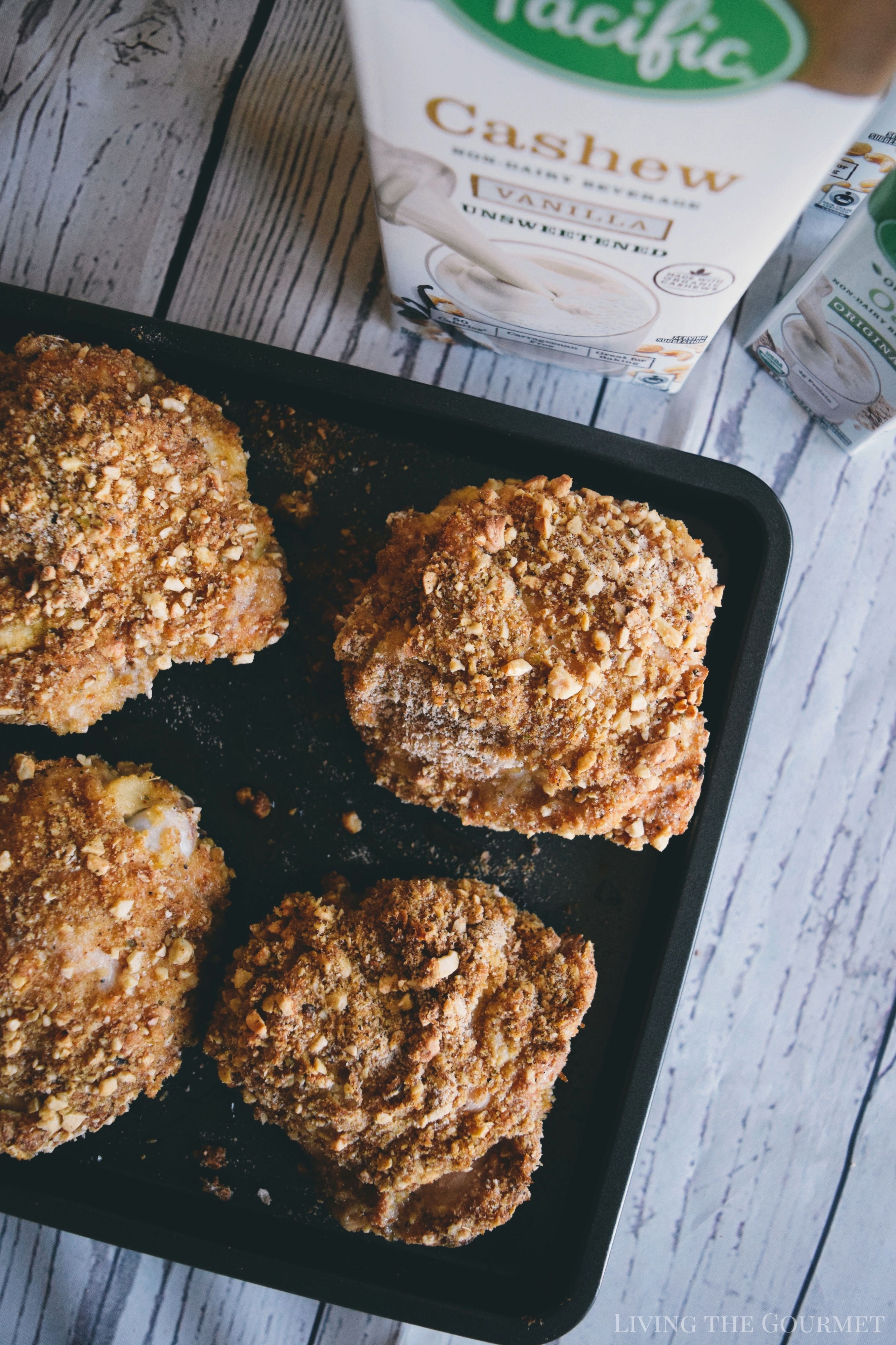 After that, set the shitake mushrooms in a heated cast iron frying pan with some olive oil, and grill until golden and then set aside. We then heat the pan with a bit of butter and a drizzle of olive oil, add in sliced shallots, grated garlic, lemon zest, and rosemary and then sauté until the garlic is fragrant. Then add in the seasonings listed below and toss.

Add in the Cashew Non-Dairy Beverage, the processed cashews, lemon juice, and let that simmer over a gentle heat for about five minutes, or until it thickens slightly.

After that, plate the chicken thighs, and top with the shitake mushrooms, the gravy, a drizzle of honey, and a dash of ground black pepper as shown below. 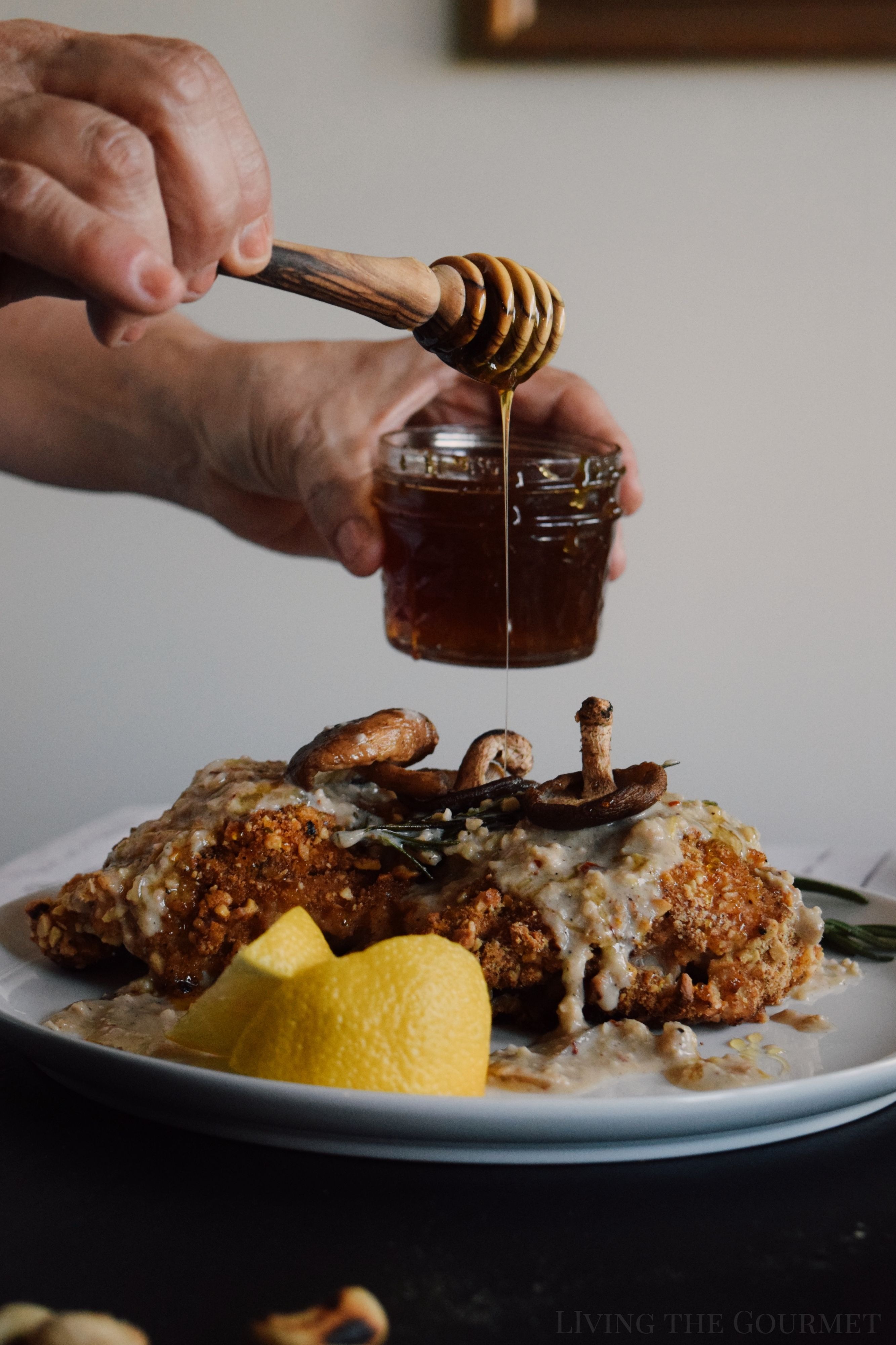 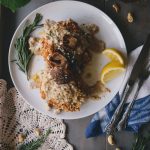 For the Cashew Crusted Chicken:

For the Dairy Free Cashew Gravy:

For the Cashew Crusted Chicken:

For the Dairy Free Cashew Gravy: 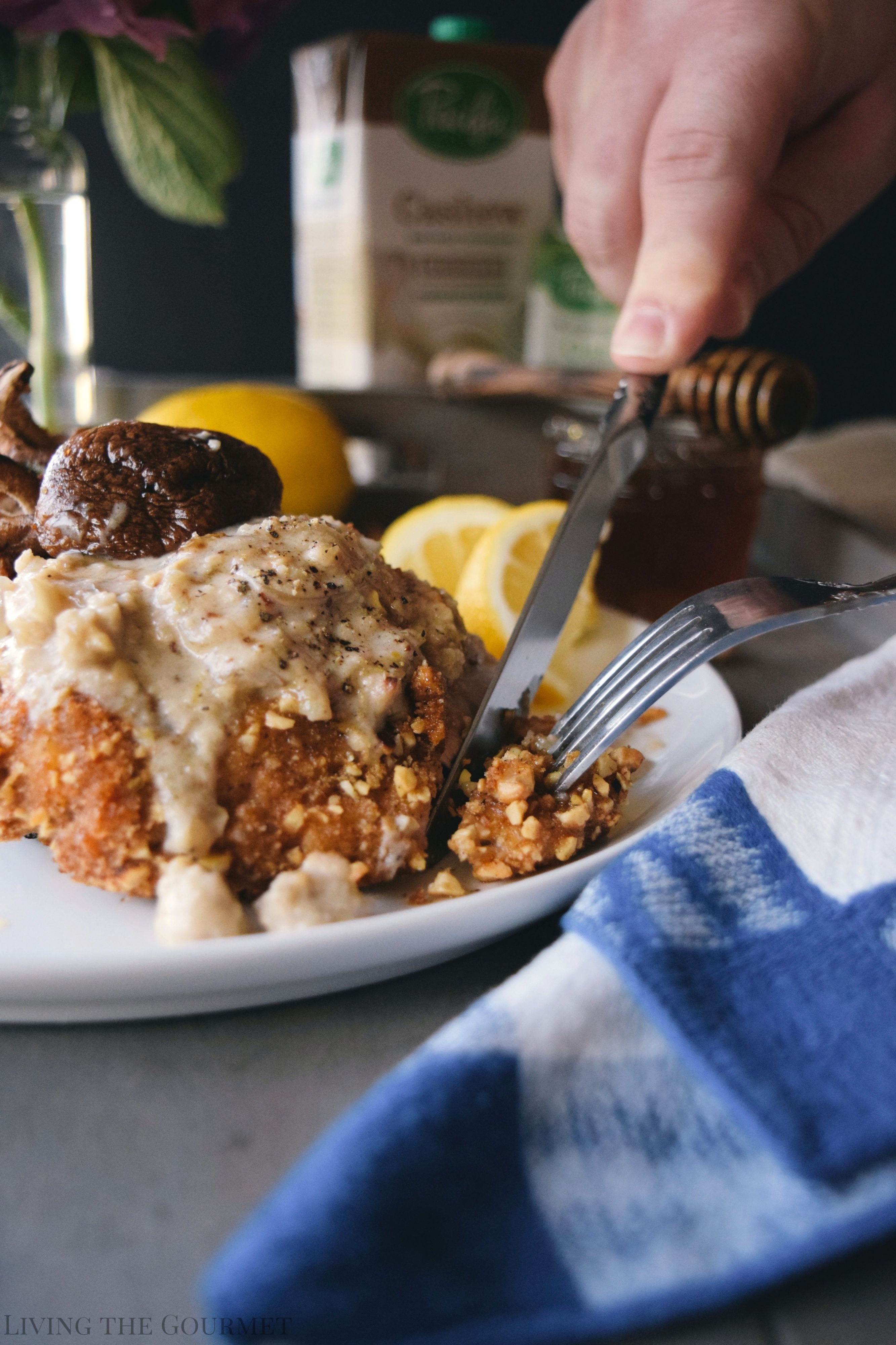 And just like that, you’ve got a delicious meal that the entire family will simply love. 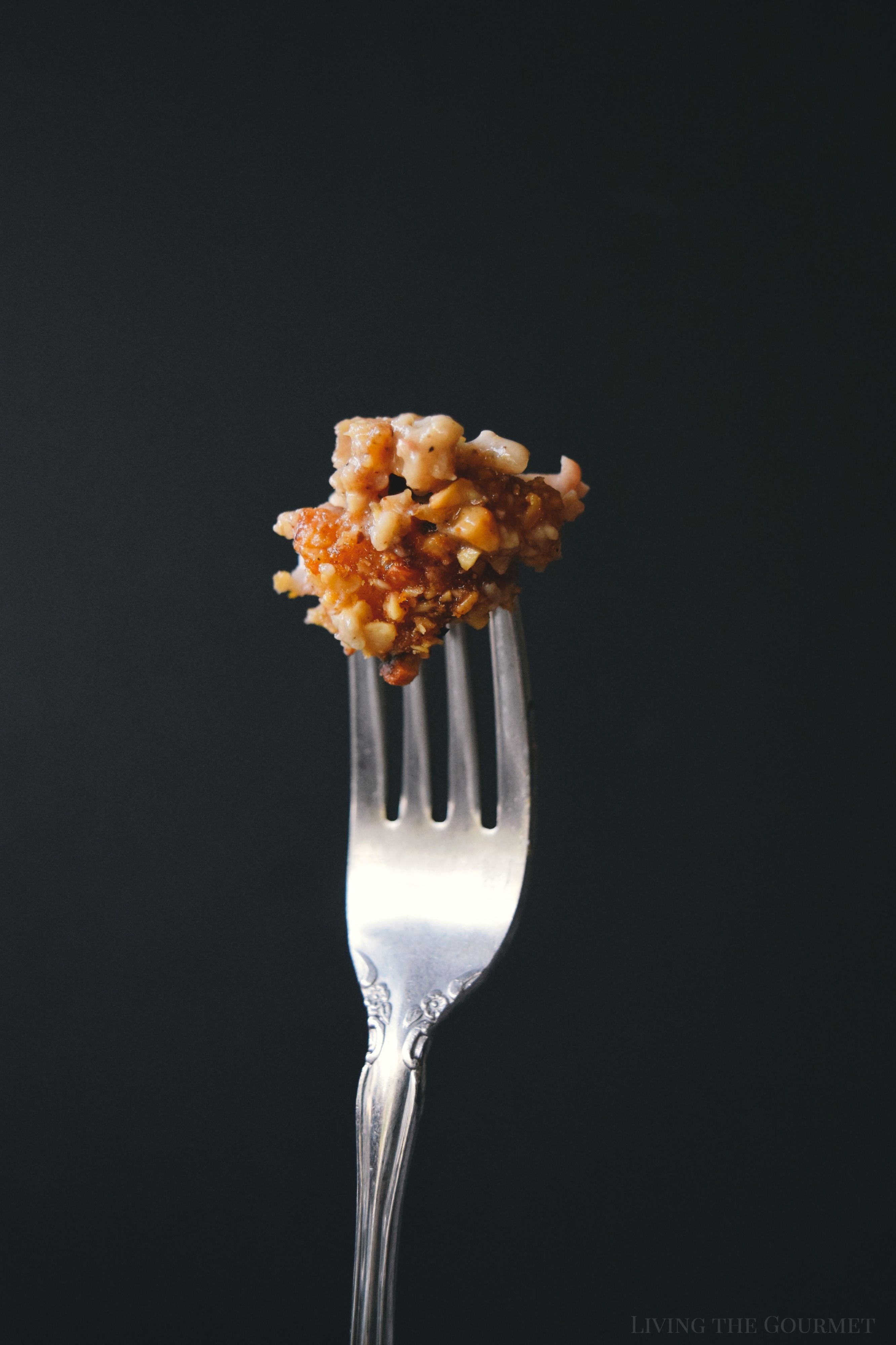