Enjoy the season’s final harvest of zucchini with this vegetarian Zucchini Lasagna! 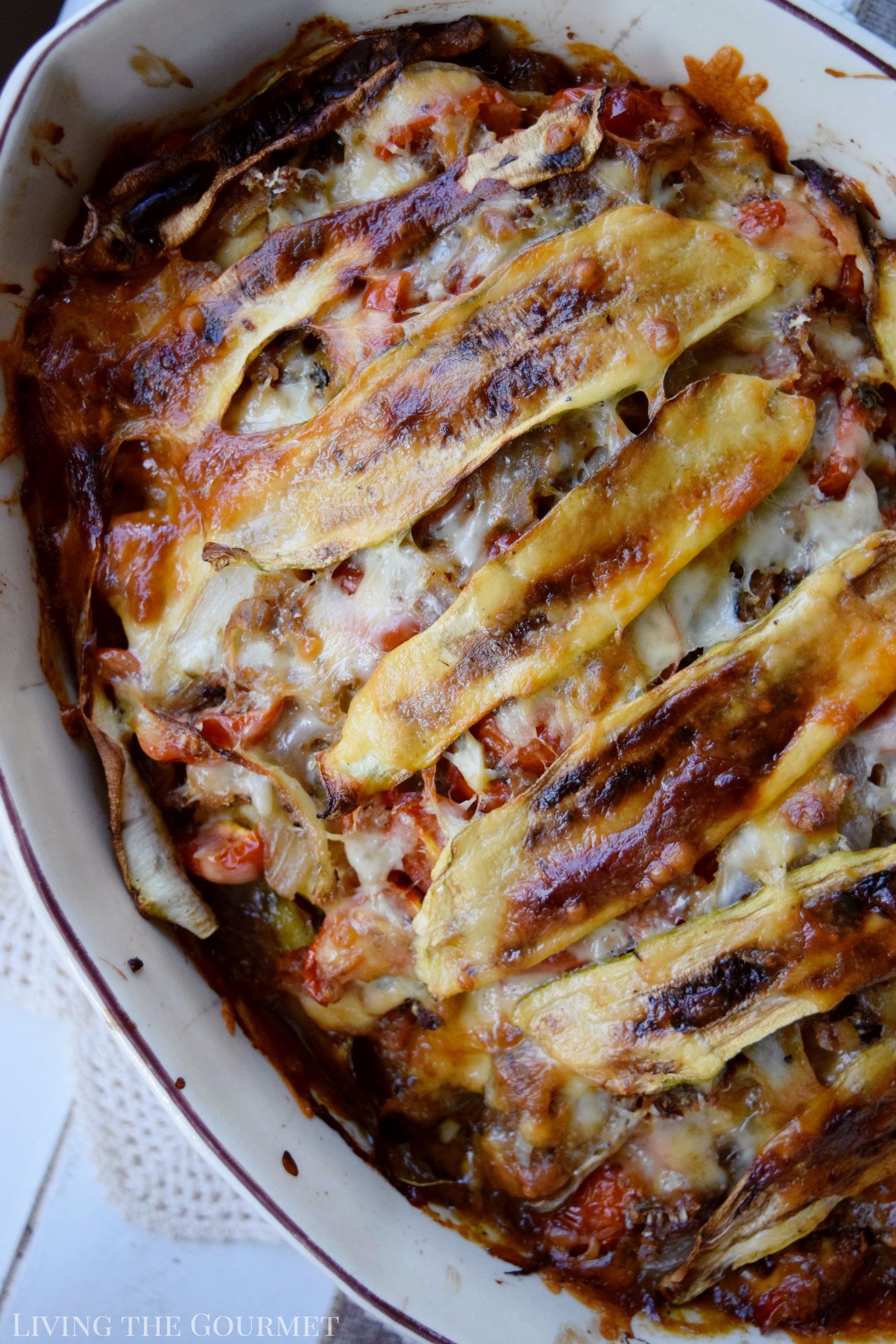 Aristotle proposed that the purpose of art was to ‘display by manner accentuation’ the ‘inward significance of things,’ rather than to simply heighten their appearance. In this way, the old saying “The clothes make the man,” cuts to the idea that the way in which we present ourselves is often a representation of lies beneath.

This, of course, is true in the culinary realm as well.

I’ve spoken of this idea here several times in the past, and how a ‘good meal’ is a feast for all of the senses. One of the first things I learned about food is that even the very beast of recipes can be ruined if you don’t carefully pay attention to things that are, frankly, unrelated to aroma, flavor, or texture. Setting, plating, atmosphere, and even ambient sounds all play into how people ‘perceive’ their meal.

In other words, by the ‘art of appearance,’ one heightens the meal.

To that point, let’s say I placed a tray of lasagna on the table. The first things you would ‘perceive’ is the thick aroma of sauce hanging on the air, and of you would expect to feast on alternating layers of flat noodles, melted mozzarella, seasoned ricotta, and marinara.

However, as you may have guessed from the above, appearances may, or may not, be deceiving. 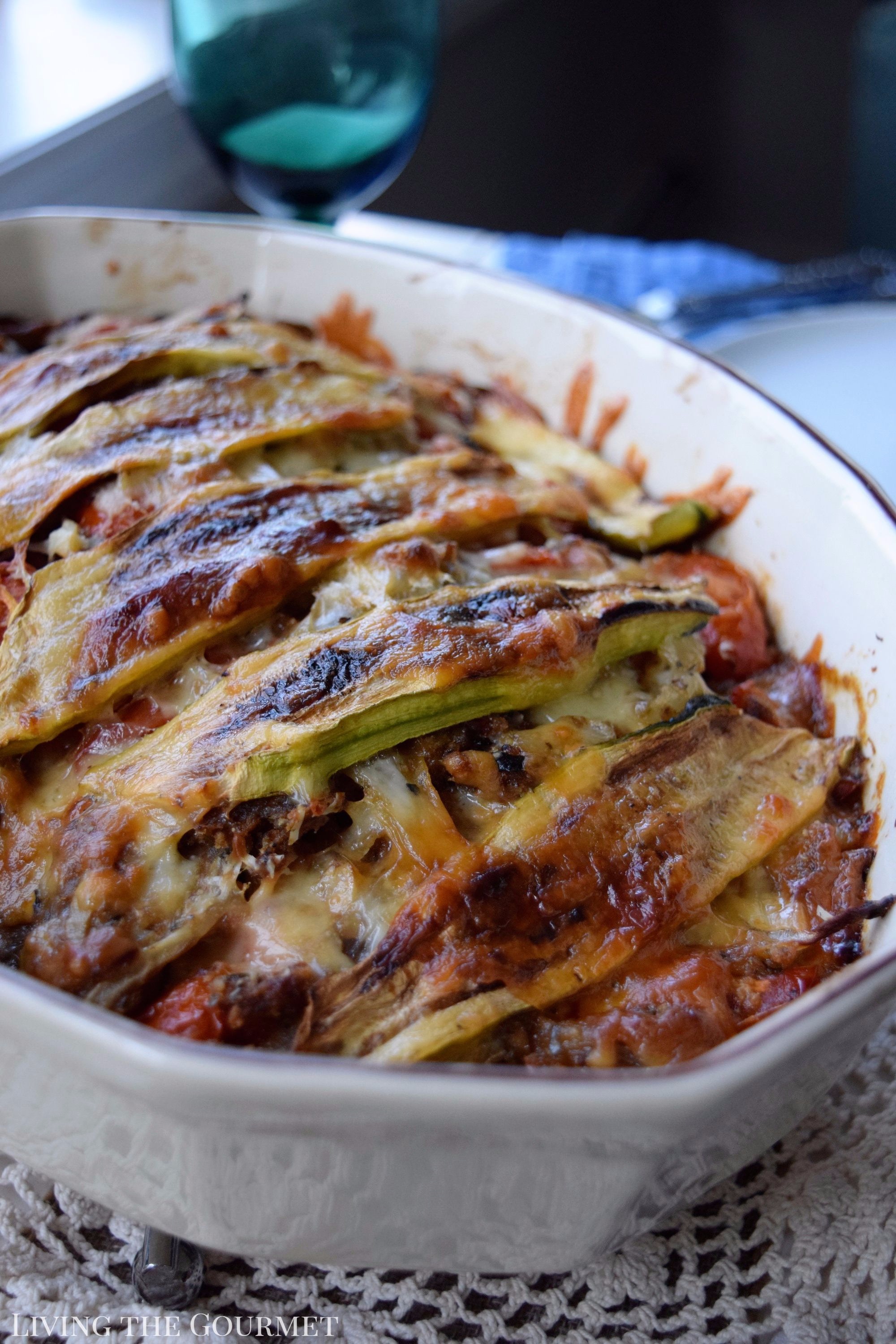 Now, imagine that same classic in which the plain noodles are replaced by long strips of zucchini grilled with olive oil and roasted garlic, and seasoned with red pepper, and in which a rustic mix of mozzarella, breadcrumbs, basil, and roasted tomatoes takes the place of plain ricotta, and you’ve got the idea behind today’s recipe.

While Zucchini Lasagna is sometimes regarded as the ‘healthy alternative’ to the more traditional ‘noodle lasagna,’ that ought not tinge one’s perspective on the recipe, which in truth can be much enhanced by the fuller texture and more complex flavor profile behind what forms the layers in this alternative lasagna.

That said, we are brought to today’s recipe.

To start things off, we begin by peeling and then slicing about eight medium zucchinis length wise. Once that’s done, we heat a large cast iron frying pan, and char the zucchini slices lightly on each side, and then set them aside while we prepare the filling.

As shown below, to prepare the filling, we heat a large cast iron frying pan with olive oil, and add in the sliced onion and garlic, and heat them until the garlic has become fragrant, and the onions slightly translucent. After that, add in the fresh basil, the capers, the quartered grape tomatoes, and the seasonings outlined below, and let that cook for about two minutes.

After that, add the anchovies and the breadcrumbs, and let the mixture cook for another two minutes on low heat.

Now for the fun part – Build the Lasagna. 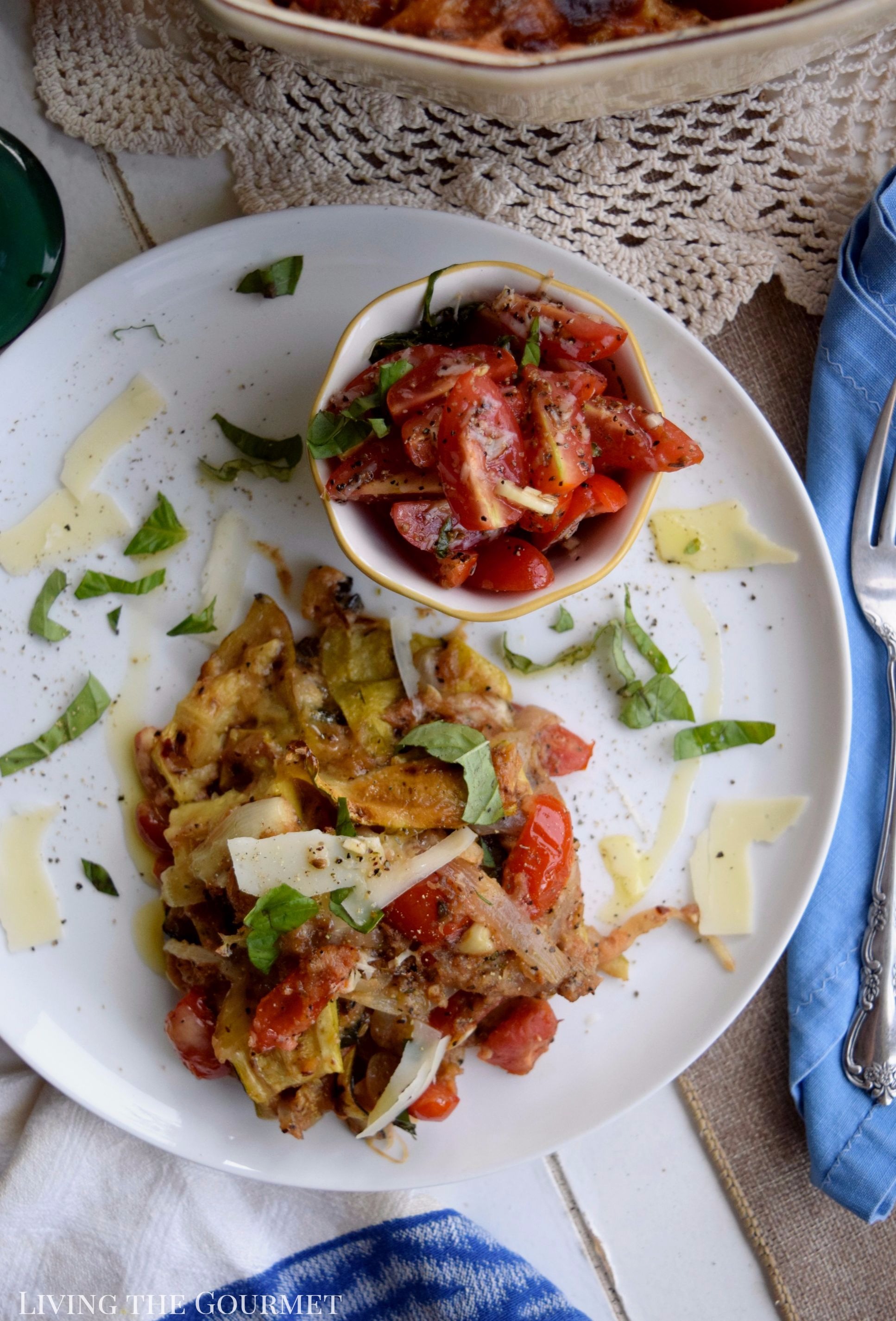 To start off, we begin by coating the bottom of a baking dish with olive oil and then lining it with the sliced zucchini strips. After that, layer the breadcrumb mixture over the slices, followed by grated Romano and Mozzarella cheese.

After that, simply repeat that process until the baking dish is full, and then for the final layer, top the constructed lasagna with a final dusting of Romano and mozzarella cheese, a dash of olive oil and some red pepper and shredded basil for garnish.

Then bake for about ten minutes, and it’s ready to serve. 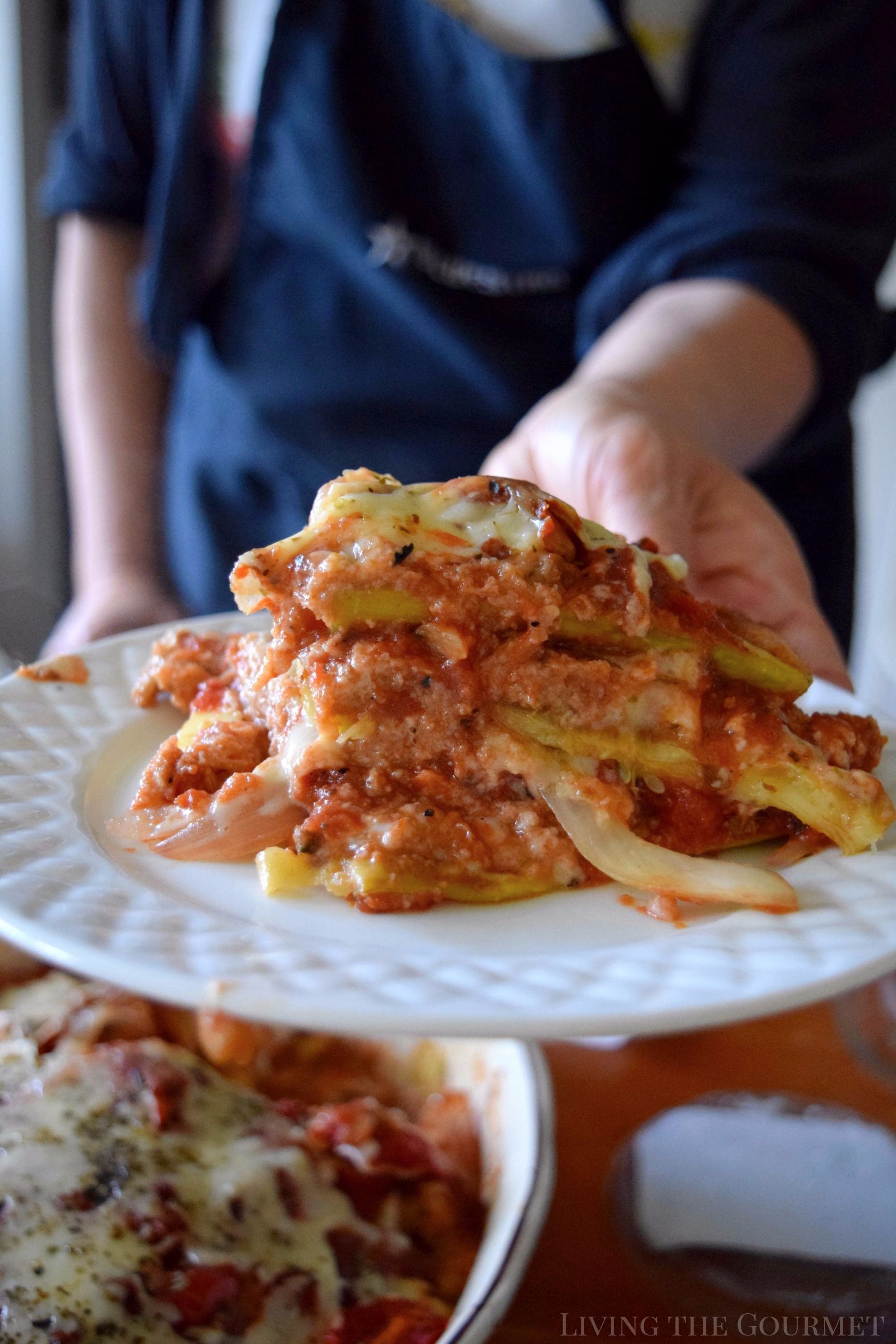 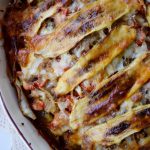 To Build the Zucchini Lasagna: 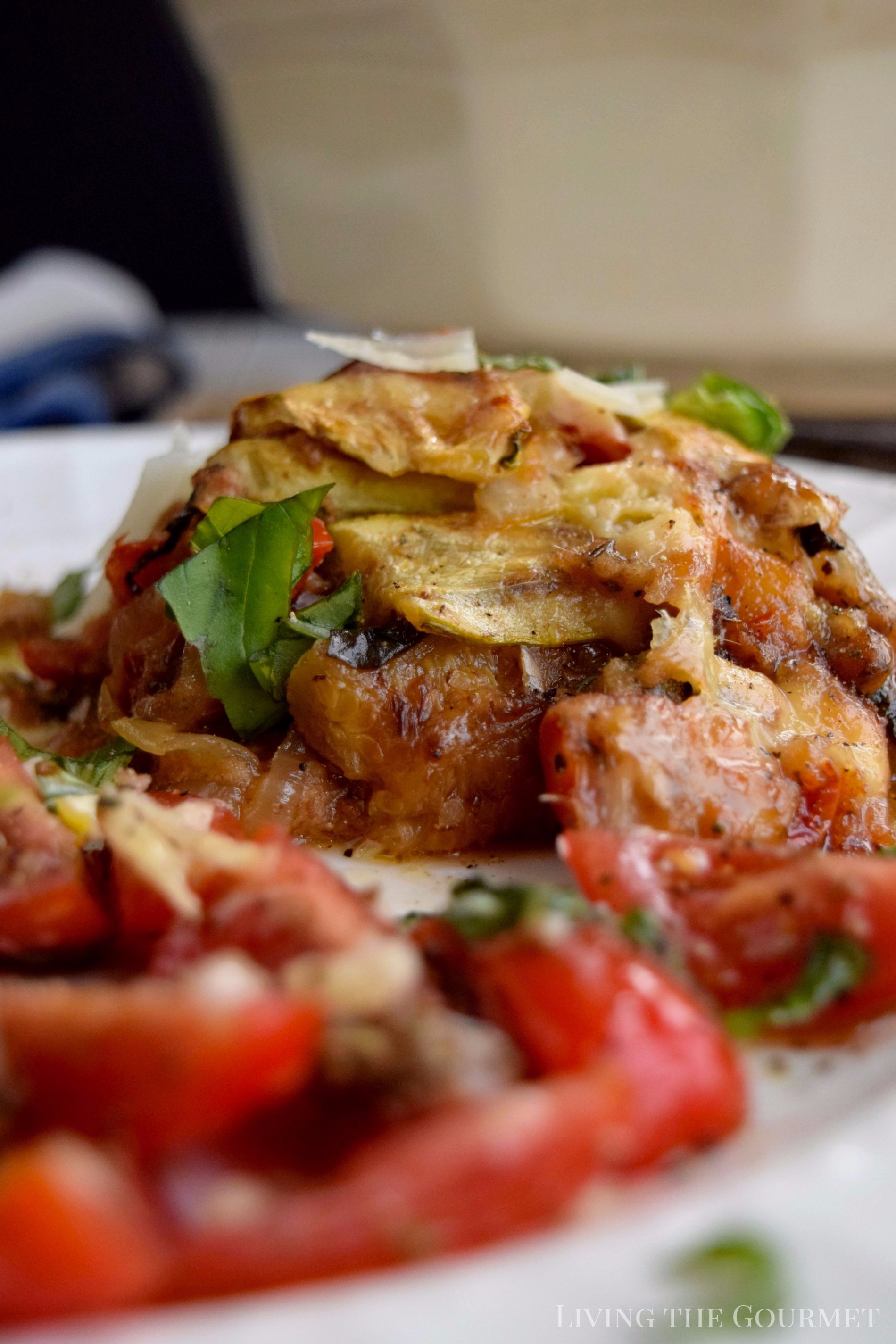