There is nothing quite as comforting as chicken soup on a brisk evening. I’ve added roasted fall vegetables to this classic and served it alongside thin bread crisps for the a delicious, hearty meal. 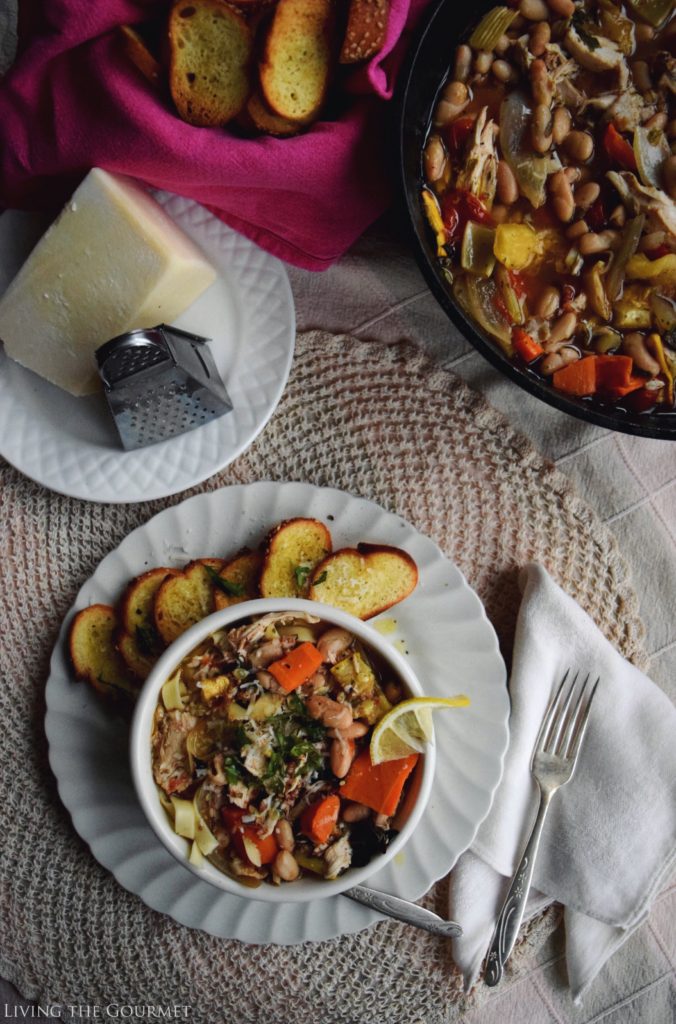 Through the voice and explorations of the lighthouse keeper Elton, Lovecraft spoke of ‘Xura,’ a place of ‘unattained pleasures.’ Beyond that land, past the basalt pillars of the west, Elton hoped to explore Cathuria, a fabled realm of Hope, where he believed the gods dwelt in unending happiness and splendor. Yet, spurred on by vanity, once passed the basalt pillars of the west, Elton lost control of his ship as the sea began rushing ever westward, and was swept off the edge of the world, having been forsaken in his vanity by the same gods he had arrogantly hoped to join.

The connection between these two places is obvious. Hope, unattained, begets sorrow, adding yet another ‘unattained pleasure’ to the treasure troves of Xura. In Elton, we see a classic dreamscape roughly outlining the course of human consciousness. However, just as Plato was fond of prying unintended lessons from the words of those with whom he conversed, there is perhaps a lesson in the tale of Elton and his White Ship, that was perhaps unintended by the author himself. Taking for granted the voyage of our life, it is easy to bypass pleasures and ambitions, both large and small, if our gaze is set forward past the veil of our uncertain future. Just as Elton would have been wisely advised to stay within the land Sona-Nyl, so too are we advised to partake of life’s joys, both large and small, when they present themselves. 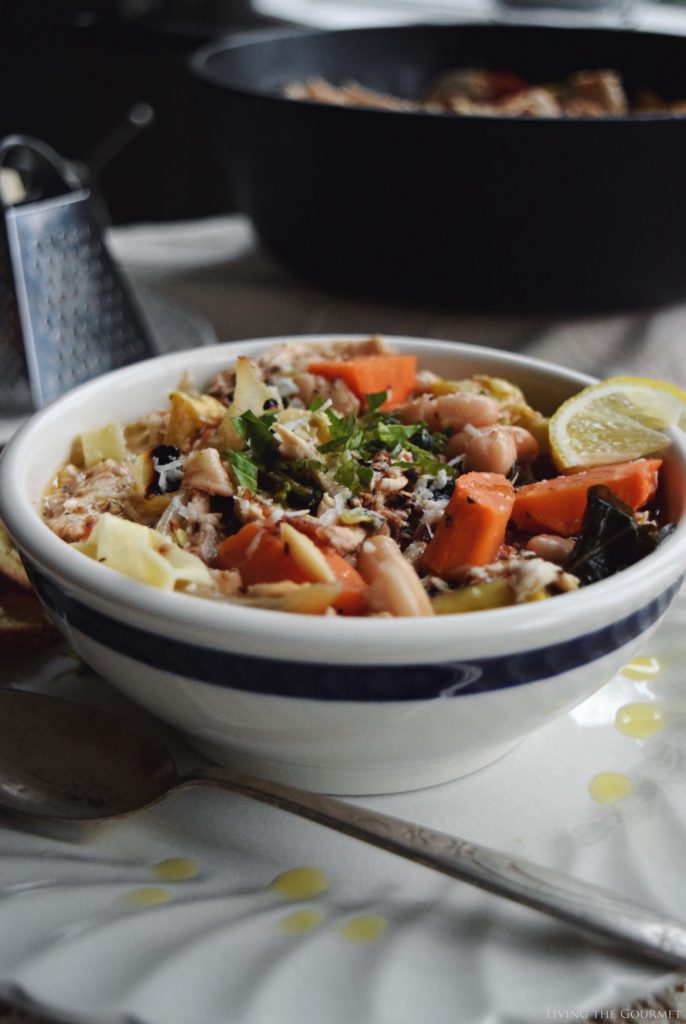 This is, largely, one of the key ideas behind the perennial culinary subject of ‘saving time,’ and ‘easy tricks’ for fitting home cooked meals and fresh ingredients into our rushed modern lives. A good meal, a bit of respite, and a moment to take that proverbial ‘breath,’ are not only supremely healthful and thoroughly enjoyable, but they help remind oneself of one’s own humanity. As Emperor Nero remarked of the Domus Aurea, his notorious gilded palace, “Finally, a dwelling worthy of a human being,” so too should we set aside moments ‘worthy of our humanity.’

I found myself relating to this very subject late yesterday afternoon. The previous night I was bound by the invisible chains of responsibility to my keyboard, and was kept there well past the indecent hours of the early morning, which was followed by the less-than-pleasant sleep that one invariably finds at that hour. Needless to say, the busy day that followed did little for the situation. After finishing the day’s work, I found myself seated in my favorite antique chair beside my bay window. Accompanied by an oversized book and a cup of tea, it was a moment worth savoring. An hour later, and I had barely turned a page, having instead let my mind wander like a specter up and down the tired river that crisscrosses the New English scenery of the small bit of world beyond the window. 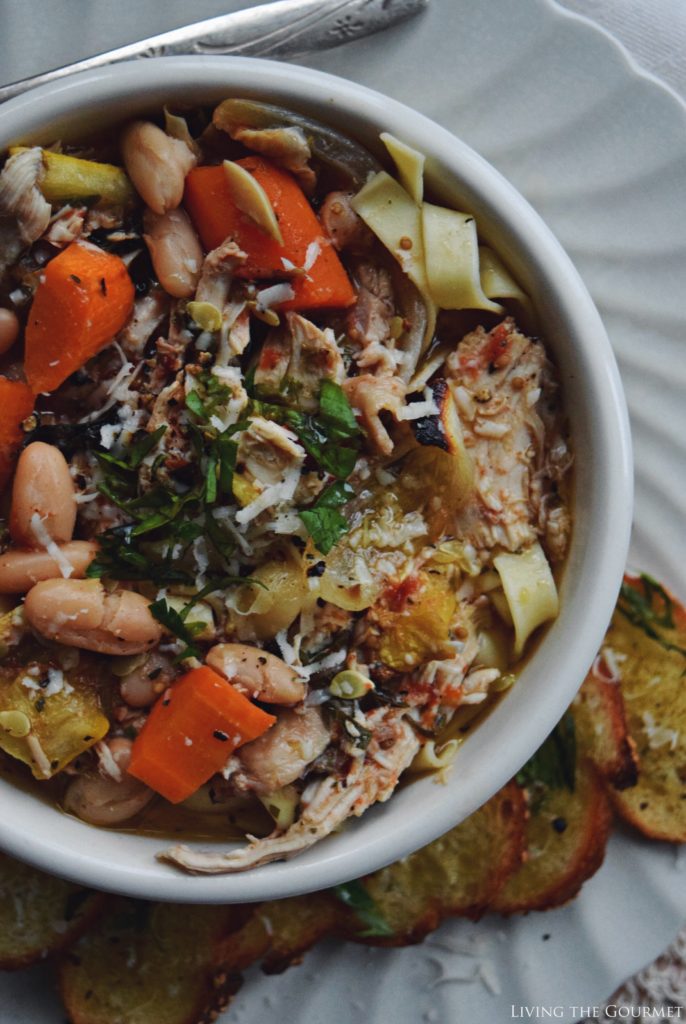 In that mildly sentimental moment, I was tempted to end the day with a ‘quick bite,’ and turn in for the rest I so needed. However, I couldn’t help thinking about what would pair absolutely perfectly with that moment beside the window with my book and my tea. Would I let this simple pleasure be unattained? Of course not.

I thought of the usual classics in such situations. Pasta topped with garlic, olive oil, and blistered tomatoes, or perhaps a chef’s omelet. Yet, I wanted something slightly ‘warmer,’ something more apropos for the onset of autumn.

I also wanted something that would allow me to have copious amounts of leftovers for the next few days which would, assuredly, be just as busy. Save time, and have something delicious. A simply unbeatable combination.

Of course, Chicken Noodle Soup was the answer to the quandary, with just a few signature LTG tweaks. 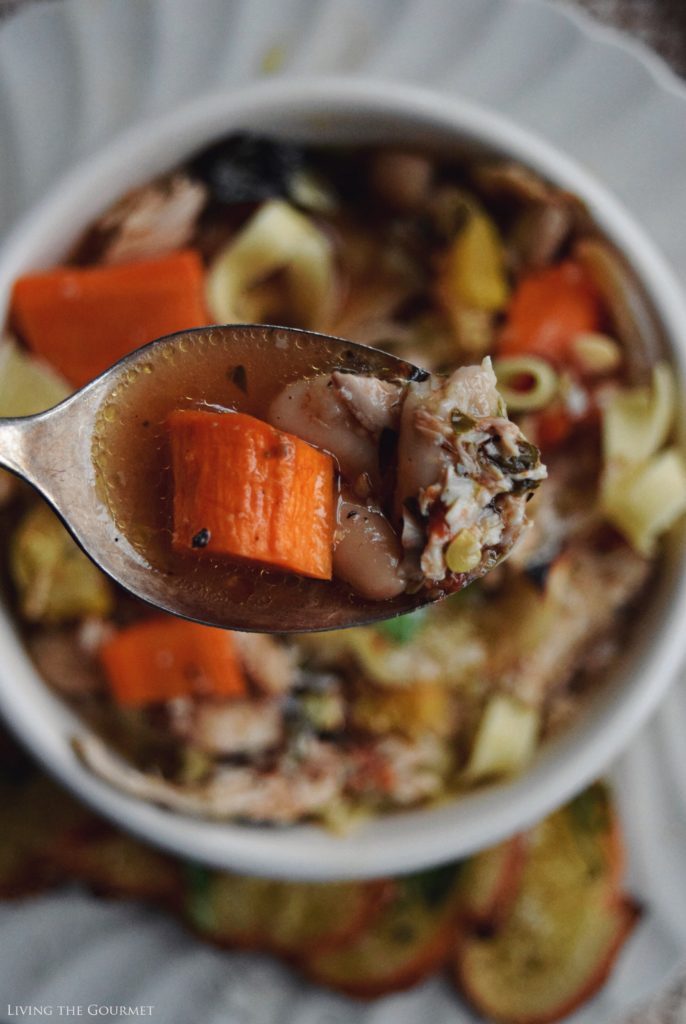 To start, I prepared a butter rub as shown below, and applied that to the chicken. I then marinated an assortment of autumn vegetables in olive oil, lemon juice, salt, pepper, and dried oregano, and baked the vegetables on a baking sheet. Meanwhile, I roasted the chicken in a sauce pot. After this was done, I removed the chicken from the pot, and then added in the chopped vegetables, water, and seasonings and let this simmer to create a delicious broth. Meanwhile, I shredded the chicken, then added that to the pot with cannelloni beans. Once all of that’s done, it’s time for the noodles. That said, you can use whatever your favorite noodles are, though I do prefer something hardy and substantial for this soup.

Once that’s finished, serve the soup over the noodles, garnish with fresh basil and parsley, top it with a drizzle of olive oil, a squeeze of lemon, and some parmesan, and you’re done. 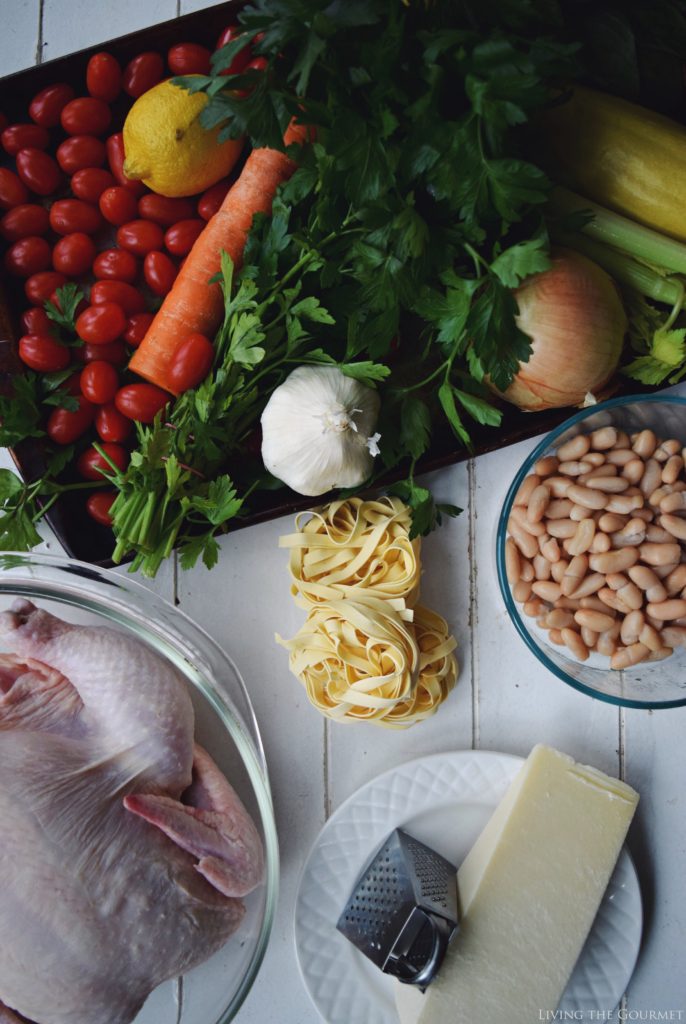 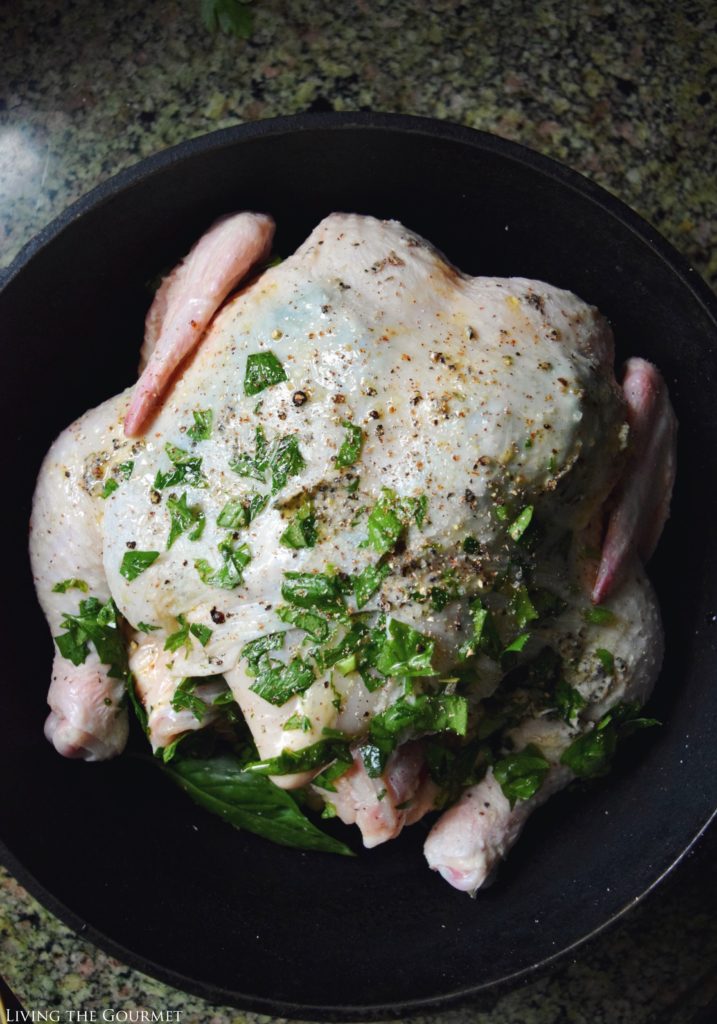 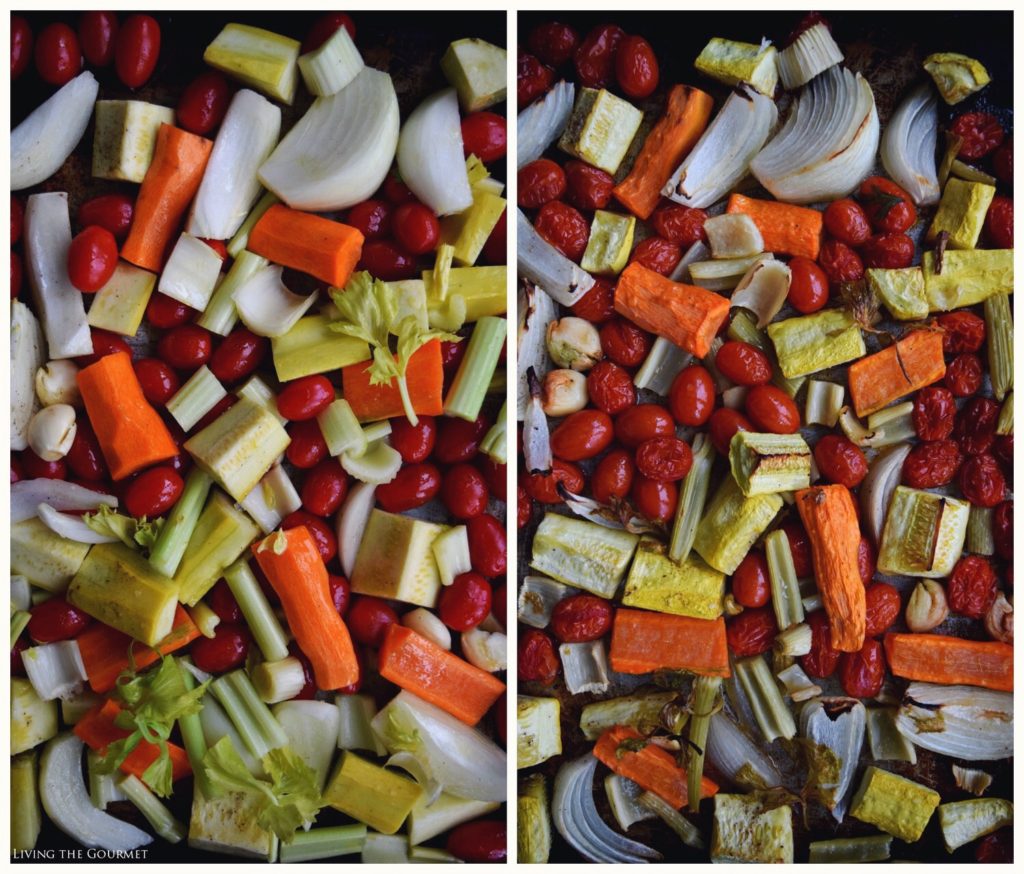 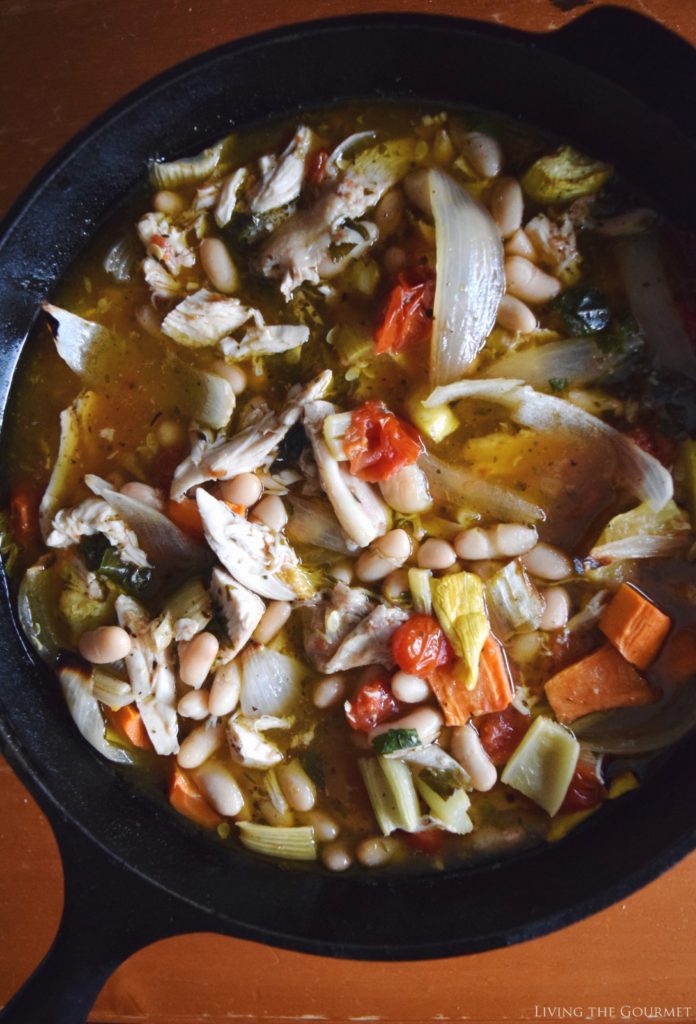 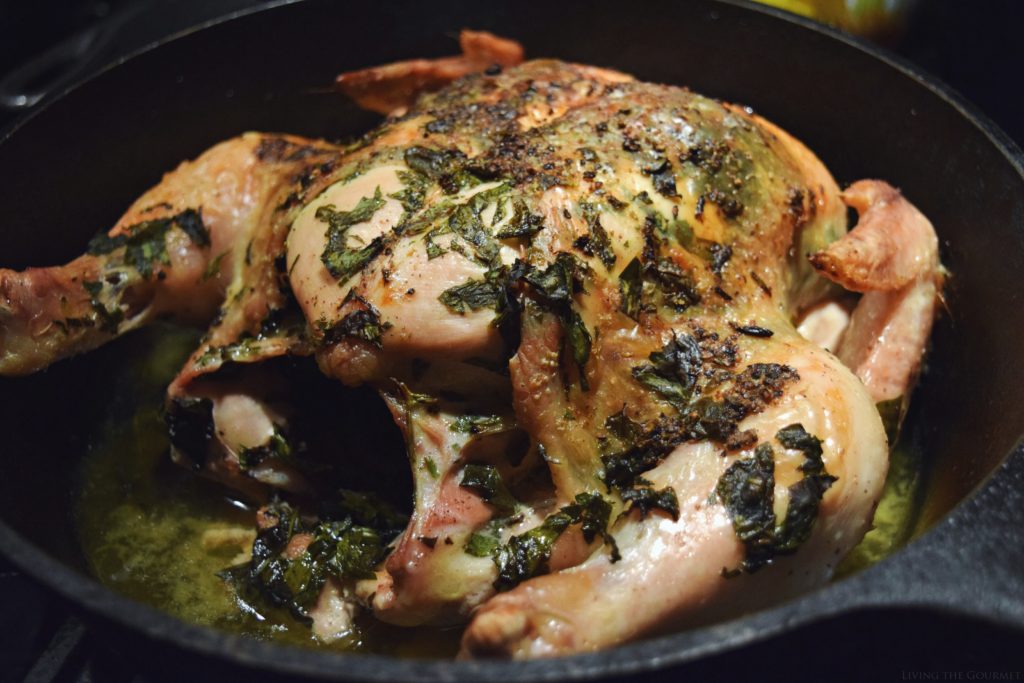 For the Rub (under the chicken skin):

Butter Rub for the Chicken:

Roasted Veggies for the Soup:

Marinade for the Veggies:

For the Roasted Chicken & rub under the skin:

Butter Rub for the Chicken:

For the Roasted Veggies & Soup: 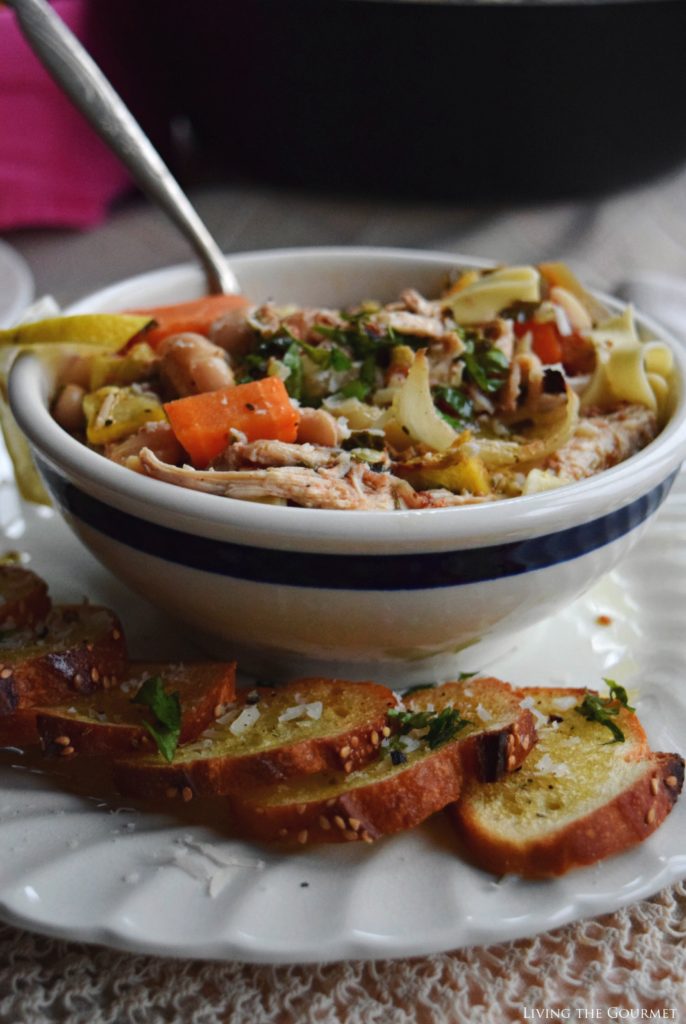