This shop has been compensated by Collective Bias, Inc. and its advertiser. All opinions are mine alone. #GoldfishMix #Walmart #CollectiveBias 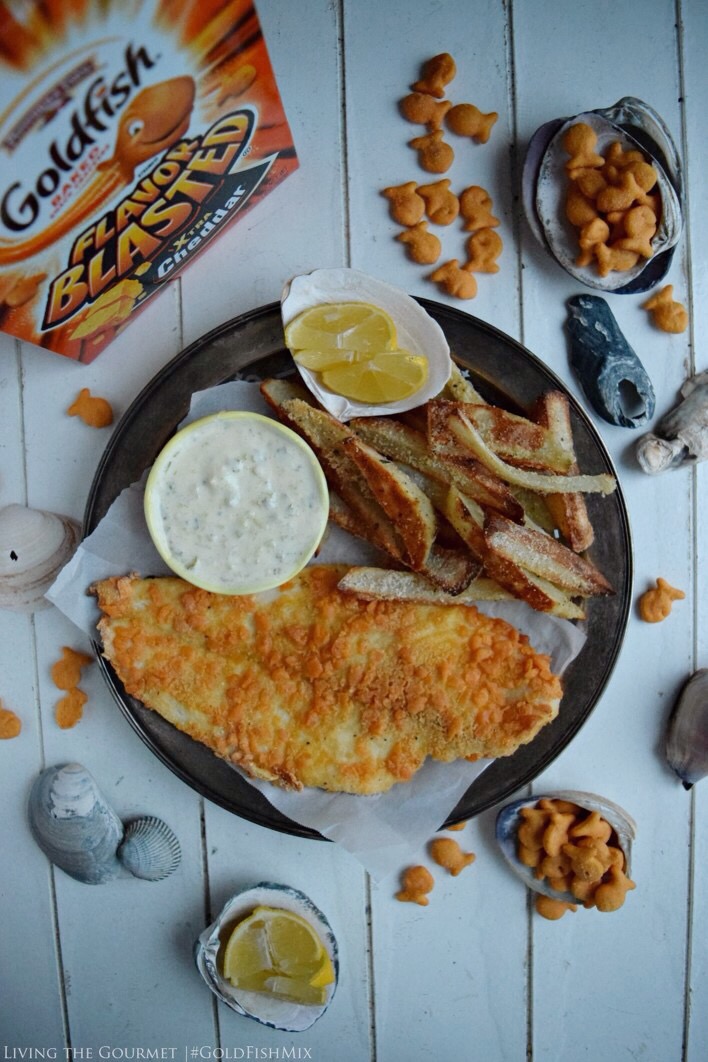 H.P. Lovecraft remarked in “The White Ship,” through the voice of Basil Elton that “Ocean is more ancient than the mountains, and freighted with the memories and the dreams of Time.”

Like the ancient Greeks, born into their island realms, it is easy to become enthralled when looking out at the dark expanse of the sea, extending endless beyond one’s vision. The air carries the scent of the ocean, heralded by the call of the gulls and the rippling crash of the waves against sea-damp sand and weathered piers. Unchanged, one becomes small, achingly aware not just of the temporal nature of mortality, but of mortal futility. For the same earth we’ve yet to truly master is beholden to the deep, it’s realm of genesis, for it is the seas from which the mountains arise, and the seas to which they shall inevitably return in the numberless millennia yet to pass. As I was well reminded, even the river itself need merely swell to rise up and reclaim all that was once within its watery domain. 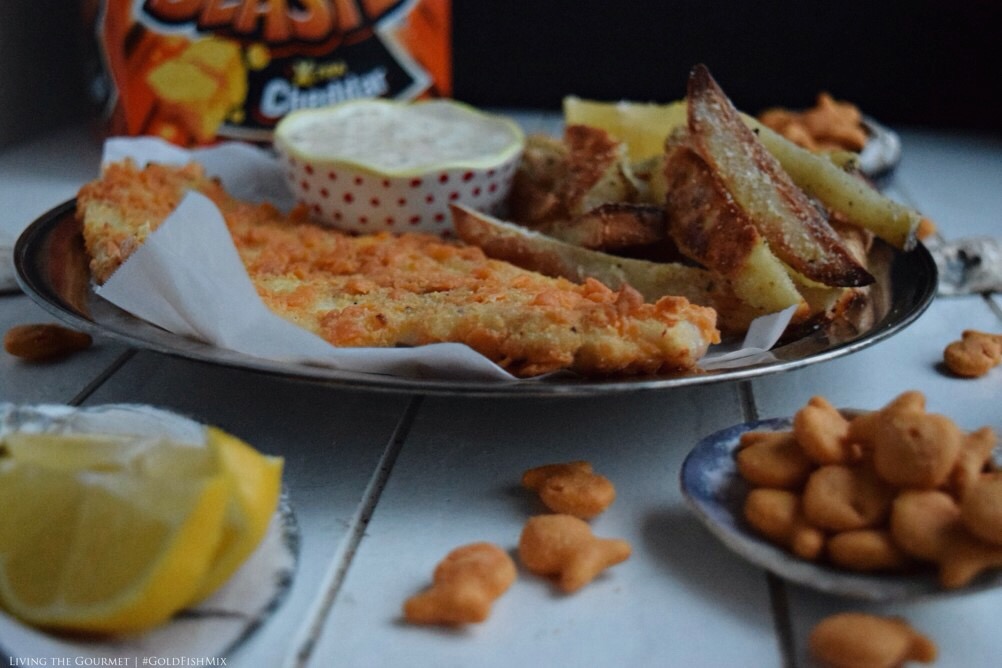 You see, if you’ve been following Living the Gourmet as of late, then you’re probably aware of the bout of wintry weather that we’ve had as of late, rife with winter flood, slush, and snow. You’re also likely aware that, for me, it could not have possibly come at a worse time – the construction of my new bulkheading, an outdoor project that positively disagrees with ice, snow, flooding, and blizzard winds. Since that post, however, I’m pleased to say that the job has been finished, and the joy currently being experienced by this coastal river dweller is something I can scarcely put to words. 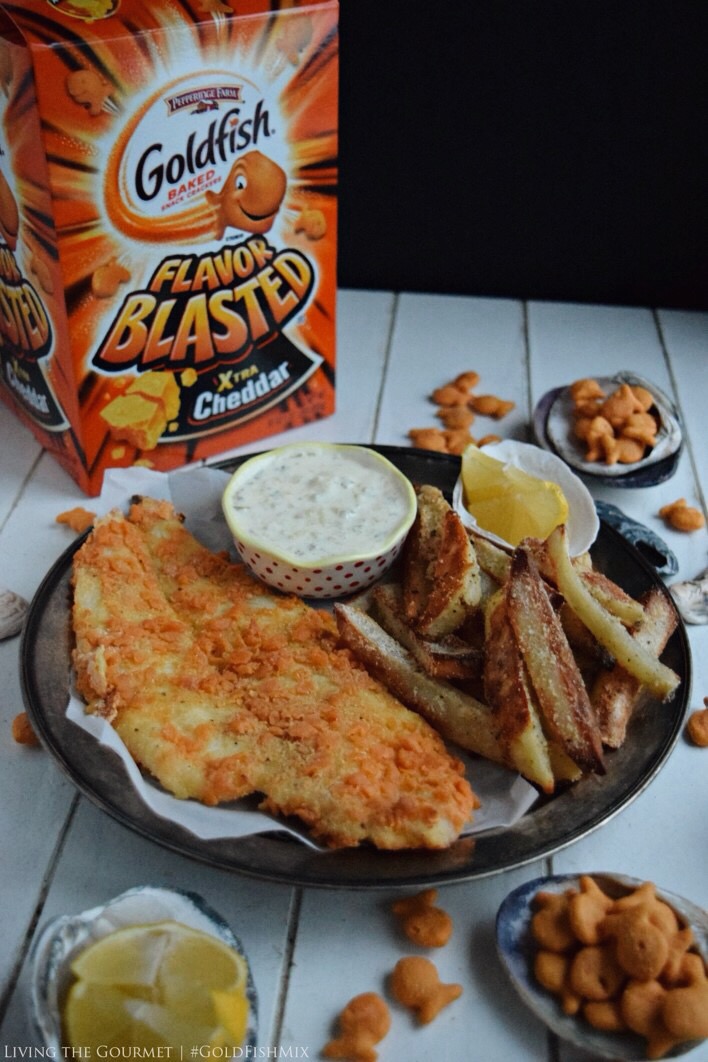 To celebrate, I decided to do what we ‘urbanesque’ river bound denizens do best – to throw a nautical themed party. Even though we would still be trapped inside due to the cold, I just couldn’t resist. I invited my brothers, along with my nieces and nephews and their young families, and decided to put together a quintessential ‘city by the sea’ tablescape. However, I had to keep things just as appealing for my young nieces and nephews as for their parents. 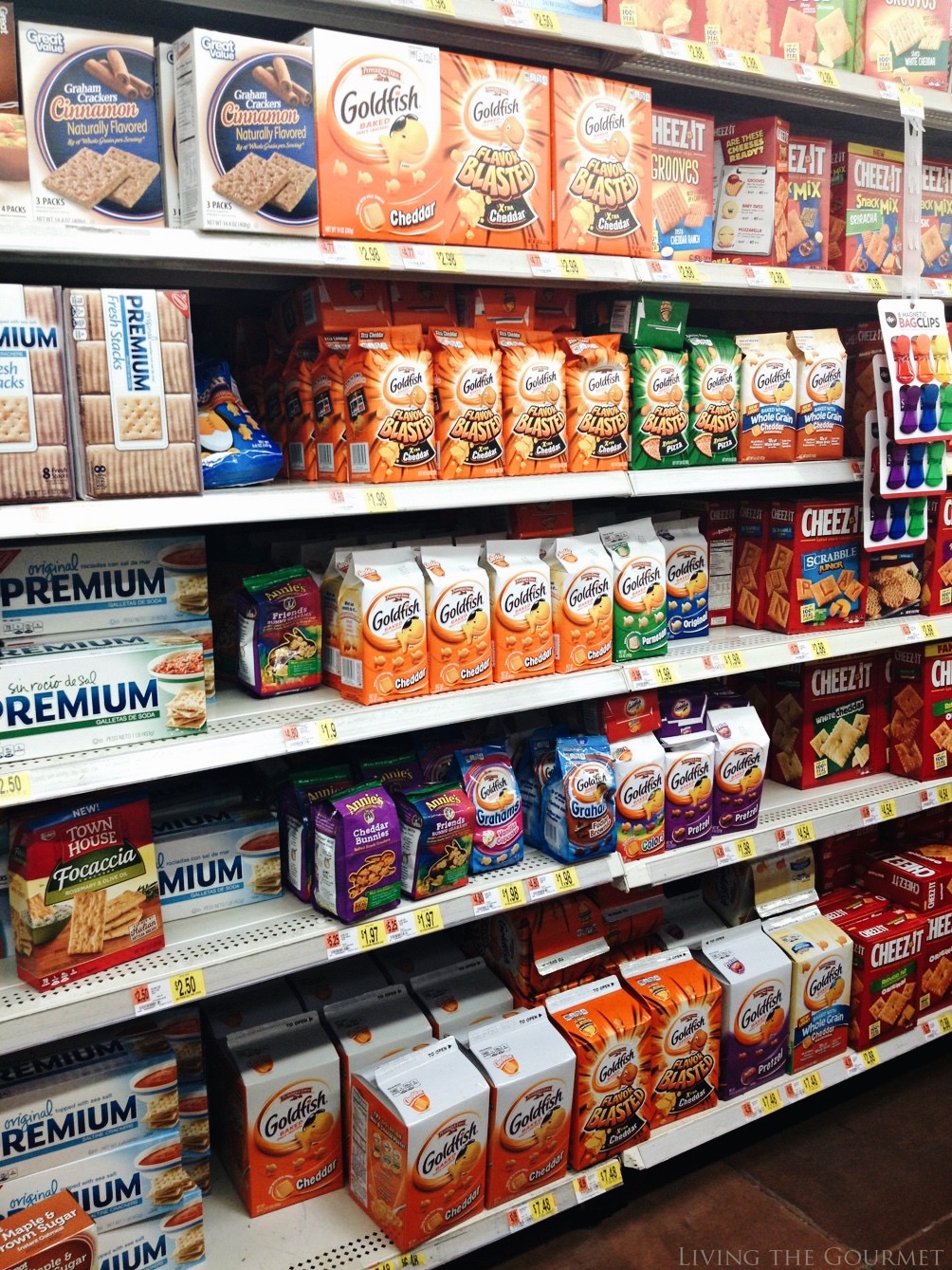 To do that, I decided on a classic Fish-N-Chips dinner, but with a less than conventional twist. First, I decided to bake it. Second, rather than using a standard coating, I would instead batter them with a base consisting of Goldfish® crackers, which I picked up during a recent supply run to Walmart. I purchased the 30oz bulk cartons which are on rollback, to ensure I would have enough on hand both for cooking and for snacking. For this particular recipe I prefer the Flavor Blasted® XTra Cheddar crackers, which adds a nice layer of complexity while also giving the Fish-N-Chips a fun twist both the parents and their kids were sure to love. It’s a win-win. 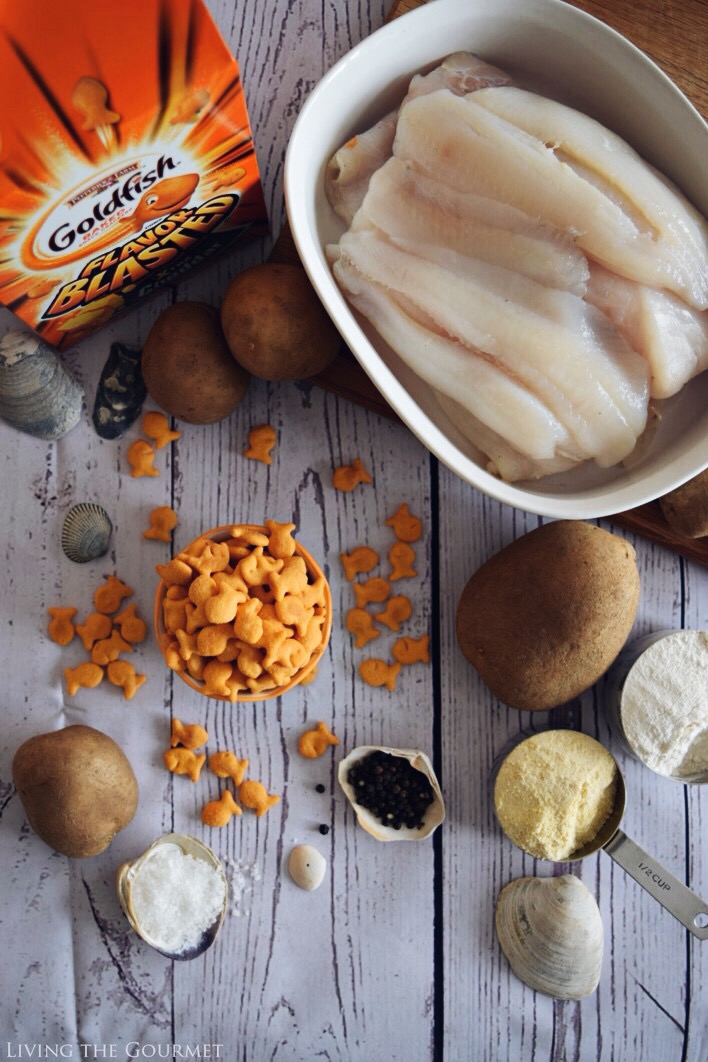 This was a perfect recipe for the occasion not just because it’s both seasonal and regional, but because it also allows my nieces and nephews to get in on the kitchen action, which in all honesty is a must given the weather. Besides, it’s the little moments like these that really build memories. To start things off, I let them crack the eggs and crush a portion of the Goldfish® crackers as shown below. While they did that, I prepared the fish to be breaded.

Now, my son prefers cod while my daughter prefers flounder, so I’m using both today. However, you can get away with almost any sturdy white fish that will keep together nicely after being baked. While I battered the fish as shown below, my niece and nephew mixed the tartar sauce, which is a simple mix of mayo, relish, and lemon juice. After that’s done, I prepared the steak fries as outlined in the recipe, and then set them in the oven to bake along with the fish.

Once that was all done, it was time to enjoy the meal and celebrate the completion of my long awaited dock. Now, remember, while you’re doing all of the above it is simply a necessity to eat copious amounts of the Goldfish® crackers by the handful. 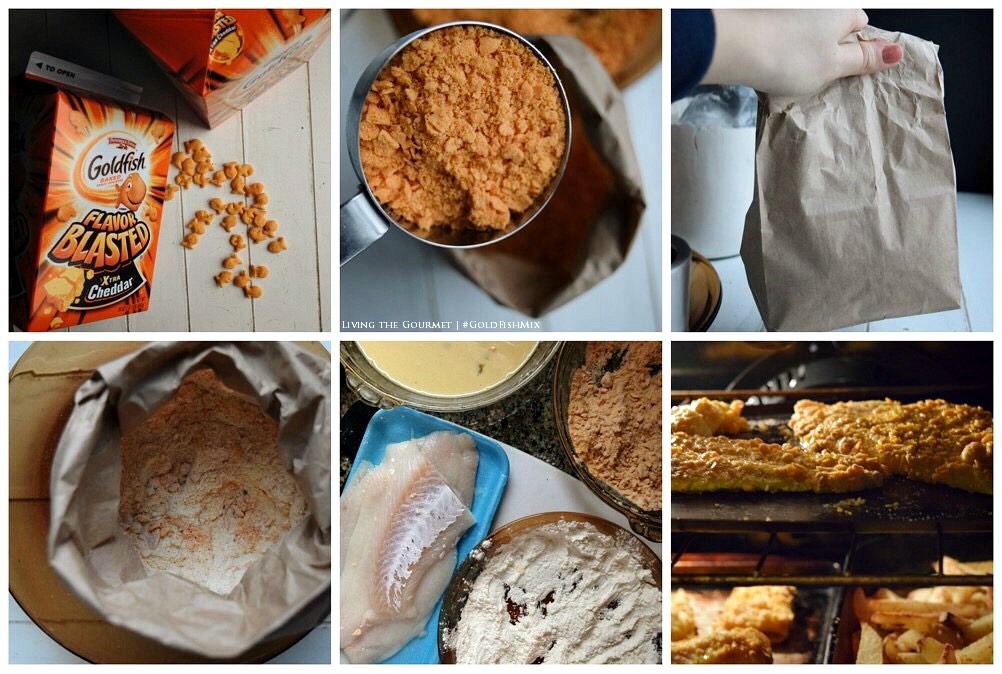 For the Tartar Sauce:

For the Tartar Sauce: 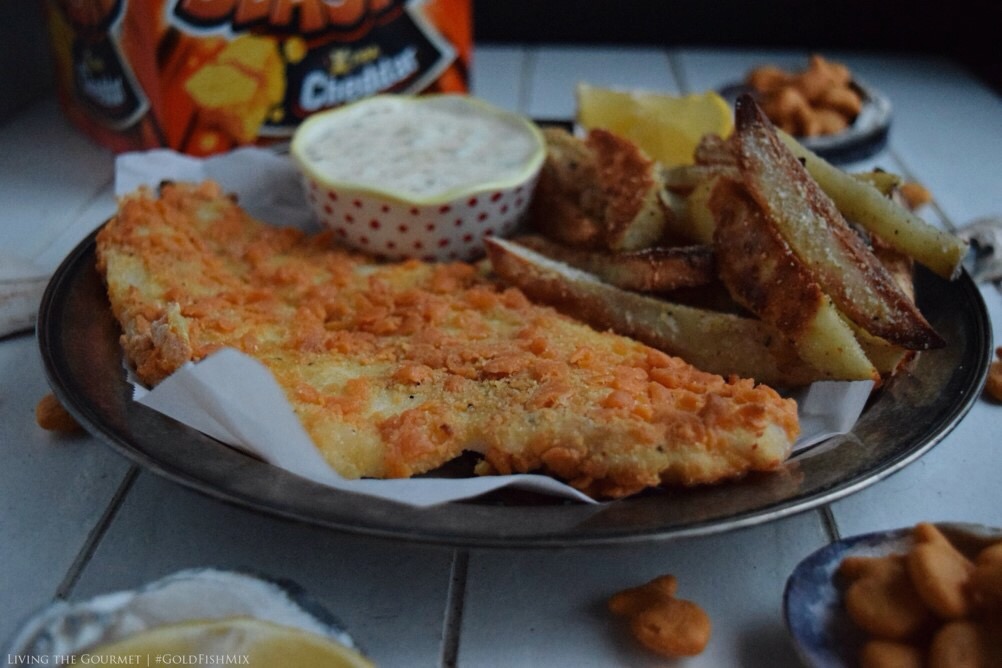