Today we’re sampling Barcelo’s Imperial Ron Dominicano in a bubbly and refreshing Ginger Rum Cocktail. In addition to reviewing the rum itself, we’ll be talking about how to spot a good rum, some of the best ways to enjoy today’s rum, and what foods it pairs best with. 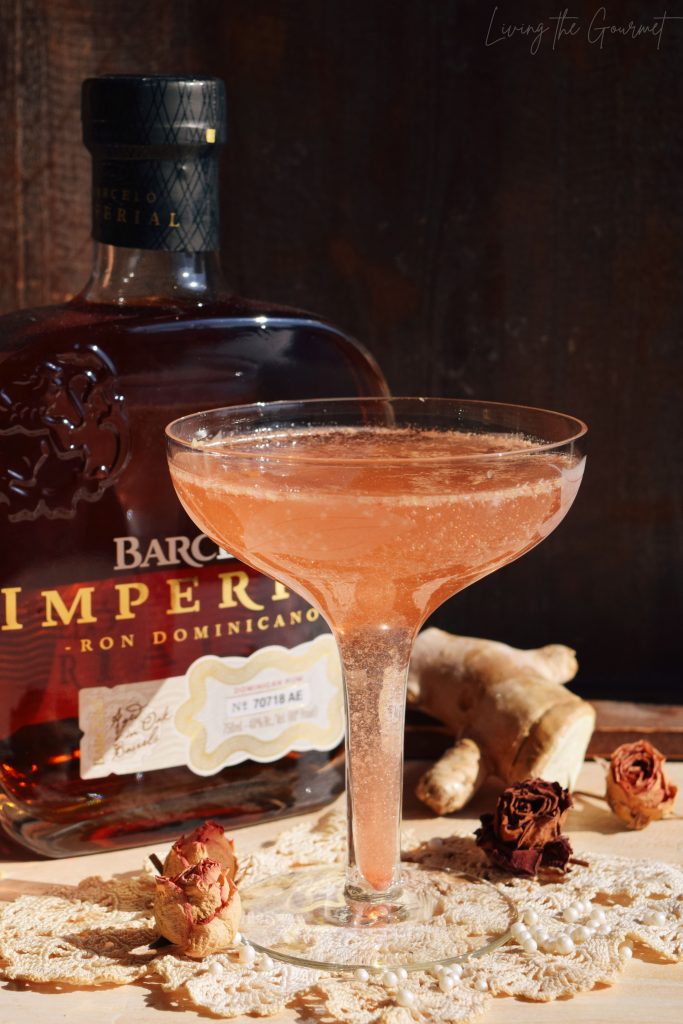 Rum starts its life as the result of fermenting sugarcane molasses and/or sugarcane juice (rhum Agricole). The fermented liquid is then distilled. The distillate is then – usually – aged. Higher quality rums are aged in oak barrels, ideally used bourbon barrels. However, aging can also be performed in steel vats as well as other types of wooden containers. 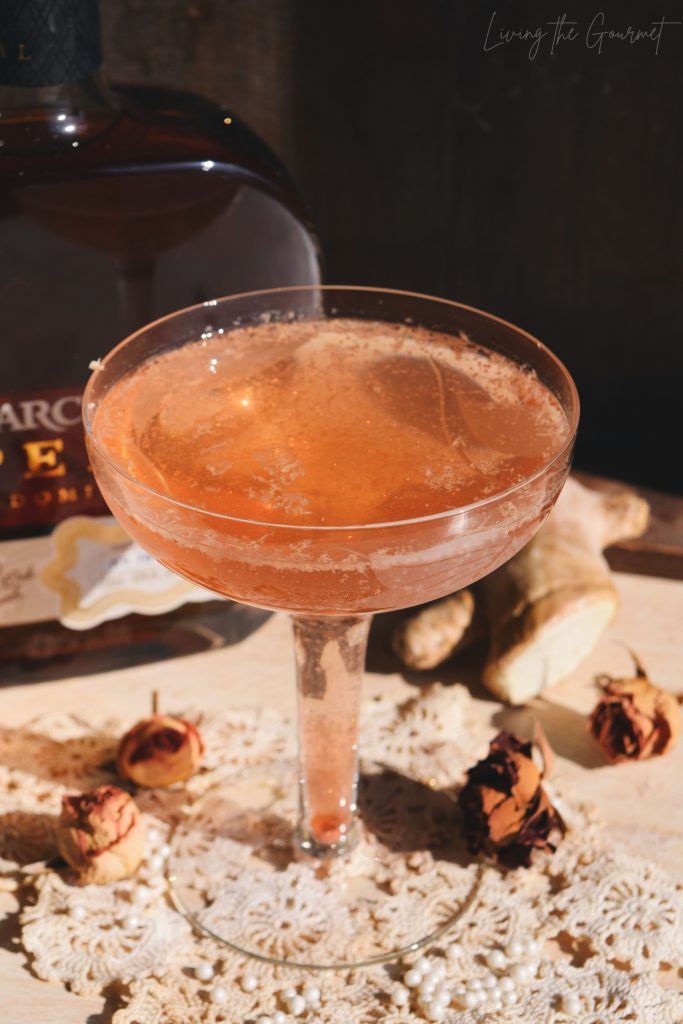 Standards, regulations, and local preference means that there’s a wide world of rum available for enthusiasts to enjoy. However, this also makes nailing down precisely ‘what rum is’ almost impossible, since what qualifies as ‘rum’ in one jurisdiction might fail to make the grade in another. 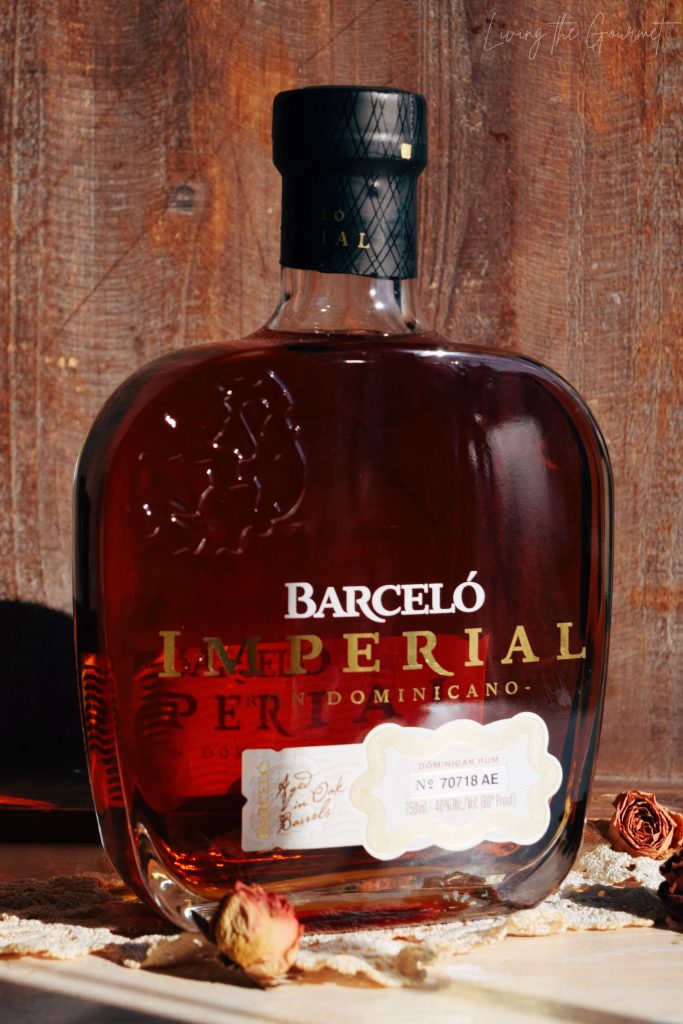 To start, rum should never be ‘cloudy.’ Cloudy rums are good for one thing and one thing only – pouring down the drain. White rums should be clear, not unlike vodka, while darker rums should be varying shades of amber. Some darker rums will appear redder than others, while the darkest of rums can appear ‘amber-brown,’ with some bordering on ‘black.’ Generally, however, regardless of how dark rum might appear, the color should fall somewhere along the ‘amber spectrum.’ 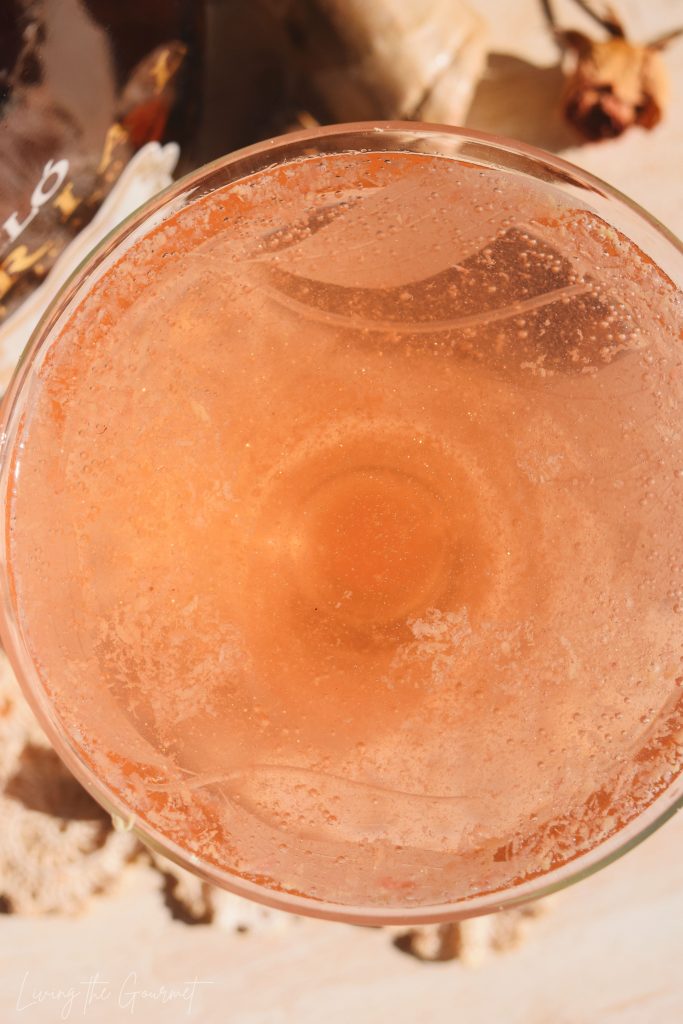 The Barcelo Imperial introduces itself with a bouquet that is at first quite ‘fresh,’ with notes of red and dark. These fruit notes soften into caramelized fruit or preserves. Hints of candied nuts are peppered throughout, along with something ‘creamy.’ The creaminess veils hints of melted butter and something ever so slightly ‘smoky.’

On the palate, dark brown sugar is instant in the mouth, laced with caramel and vanilla notes. On second sip, the caramelized fruit from the bouquet manifests as stewed or jammed fruit. Toffee apples, oak, and mixed spices all make themselves known, but are background flavors.

The finish is decently long, but without overstaying its welcome. The flavor the rum leaves behind took me aback, but pleasantly so, with notes of either charred oak or cedar, and copious tobacco leaf. Very, very pleasant.

I enjoyed this rum thoroughly, and can easily recommend it to my readers. 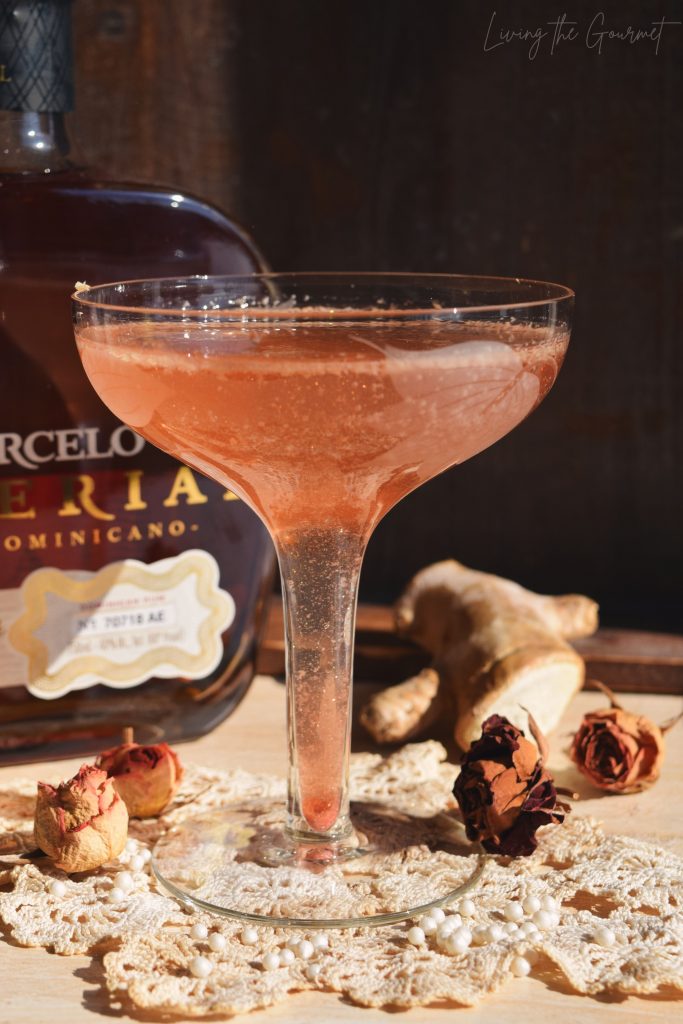 How to Enjoy Today’s Rum – Cocktails or Neat?

The Best Way: Neat. Without any doubt in my mind, this rum is best enjoyed on its own, preferably even without ice. Pair it with some of the food choices I list below, and you’re in for very pleasant time.

1) Cocktails that Complement the Rum. To reiterate, I’m of the opinion that quality rums are best enjoyed neat or on the rocks, but if you’re going to mix quality rums in cocktails, I believe it’s best done in drinks that complement or play to the rum’s finer points. With that in mind, here we go.

2) Across the Pacific. The drink that “Brings the tropics to Italy,” according to Meaghan Dorman of Dear Irving and The Raines Law Room in New York City. This cocktail combines an ounce and a half of rum, a half ounce of amaro, and three-quarters of an ounce of fresh lime juice and orgeat, with a lime wheel and a bit of nutmeg.

3) Rum Rangoon. A cocktail that’s often described as “Drinking the Caribbean,” starts by combining two ounces of rum, a half ounce of Clement Creole shrubb, three-quarters of an ounce of fresh lime juice, a quarter ounce sugar cane syrup, a dash of Angostura bitters, and two dashes of Angostura orange bitters, in a shaker with ice. Shake until well chilled, and then strain into a cocktail glass. Garnish with fresh orange peel, and that’s a wrap.

4) The Undead Gentleman. A cross between two better known tropical cocktails, the Zombie and the Jet Pilot, the Undead Gentleman is just a bit more complex and layered – in a good way. The Undead Gentleman starts by rinsing the inside of a cocktail glass with absinthe, and then combining black rum, aged rum, grapefruit juice, lime juice, falernum, cinnamon syrup, and Angostura bitters, in a shaker with ice. Shake until chilled, then double strain into the absinthe-rinsed glass.

5) One Last Midnight. A simple yet classy cocktail that combines scotch, rum, vermouth, Punt e Mes, and coffee-infused salt. Combine the ingredients in a cocktail glass with ice, stir, and that’s it. 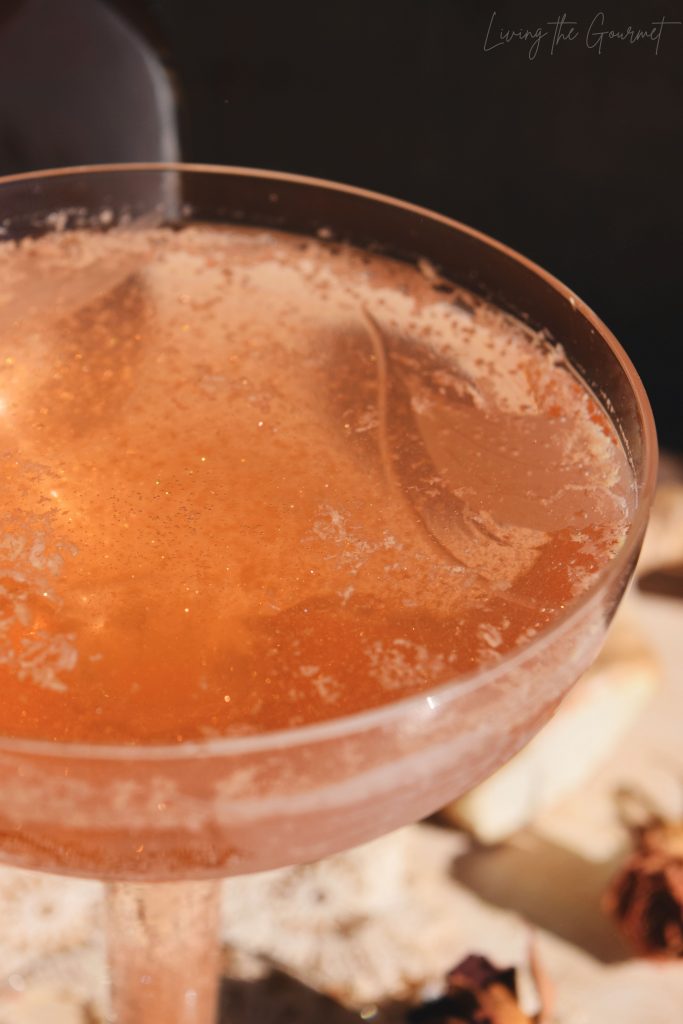 Today’s recipe was inspired by the luxurious taste of Dominican rum and the fact that Valentine’s Day is soon approaching.

I wanted to create something rich but refreshing, indulgent yet simple. Grated frozen ginger lends a warm spice to this cocktail and to really amp up its effervescence, I mixed in a pinch of edible rose gold powder. The way this drink shimmers and dances in the light is mesmerizing and sure to dazzle your beloved. 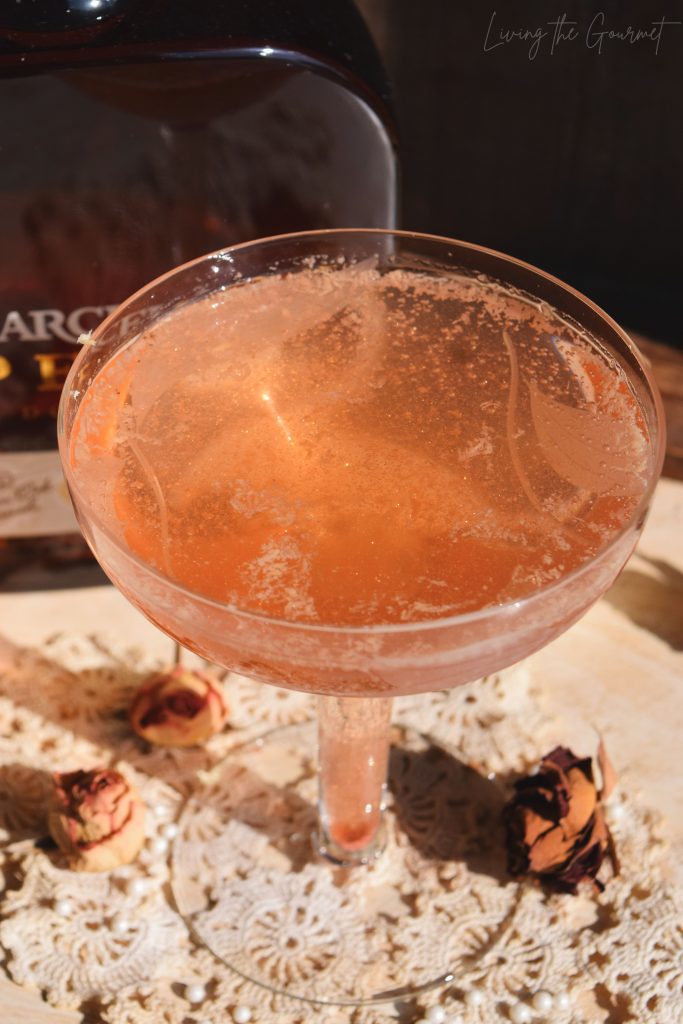