Today we’re preparing one of life’s classic comfort foods – pierogies, which are always a favorite in my home during the holiday season. We’ll be preparing ours ‘classic style,’ with a mashed potato and sauerkraut stuffing, along with sausage, cheddar cheese, peas, and garlic, and then serving them with a topping of sour cream, bacon, and chives.

We’ll be doing all of this with a little help from our new friends over at Libby’s Vegetables, whose products are perfect for creating fun, easy holiday dinners and appetizers. Pierogies are a simple delight that the entire family can enjoy, and Libby’s Vegetables help create these kinds of meals, meals that bring family and friends together.

Now, without further introduction, let’s dive right in, because we’ve got a lot to cover. 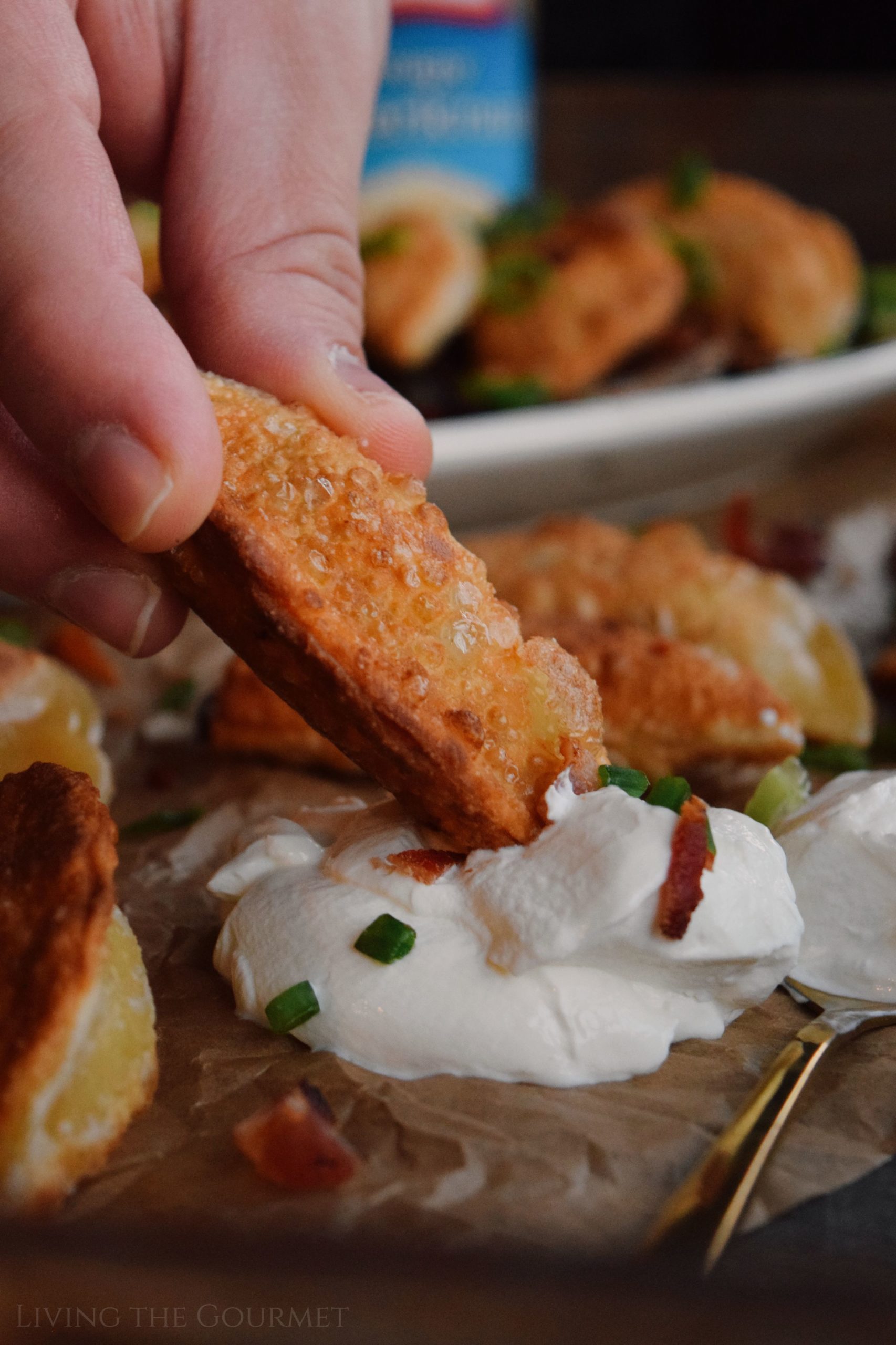 1) Red Onion vs. White Onion vs Yellow Onion vs Sweet Onion vs Vidalia. We want a sweet onion for the topping we’re pairing with today’s pierogis. For starters, yellow onions are basically the ‘workhorse’ of the ‘onion family.’ They are perfectly palatable raw, and cook up quite nicely, while lacking the ‘pungency’ of other onions, and feature a balanced astringency. This makes them ideal for almost any cooked recipe that calls for onions, especially sauces and soups, since they become sweeter the longer they cook. Spanish Onions are a type of yellow onion, but are somewhat sweeter, and pack less of a ‘bite.’ By contrast, Red Onions are the go-to onion for ‘uncooked’ recipes, being sweet, crisp, just a touch pungent, and bearing a beautiful shade of ‘vegetable red.’ This is why they often feature prominently in things like Greek and Sicilian salads, fresh salsas, and the like. Also, if we’re being honest, Red Onions really do ‘not’ cook well, since their beautiful red color simply washes out under heat, while their taste becomes almost identical to that of yellow onions, taking on something of a ‘muted’ sweetness. Then we have Sweet Onions, which completely forgo ‘oniony bite’ and astringency in favor of ‘actual’ sweetness. Seriously, I’ve bitten into these things like an apple. Since these onions are so delicious raw, they feature prominently in things like garden salads, sandwiches, raw salsas, uncooked relishes, and the like. However, this sweetness comes at the price of perishability, meaning Sweet Onions tend to sour a bit more rapidly than their non-sweet counterparts. For today’s pierogis, I’m using vidalia onions simply because of how sweet they are. However, regular sweet onions or yellow onions will serve just fine in today’s dumplings.

2) The Potatoes. For pierogies, you want medium to high starch ‘mashing potatoes,’ think Russets and Yukon Golds. Russets are high starch with a mealy texture, making them ideal for baking, mashing, and frying. Meanwhile, Yukon Golds are medium starch potatoes, and are generally considered ‘all purpose.’ However, ‘any’ potato can be mashed, and therefore made into a filling, so there’s really no need to fret over which type of potato you’re using.

4) The Peas. We’re using Libby’s Sweet Peas as part of the filling for today’s pierogis, which gives the filling a nice pop of color, while providing the ‘sweet’ portion of today’s pierogi’s sweet-and-savory flavor. In that regard, Libby’s Vegetables provide a simple solution for giving your holiday meals a much-needed veggie boost. 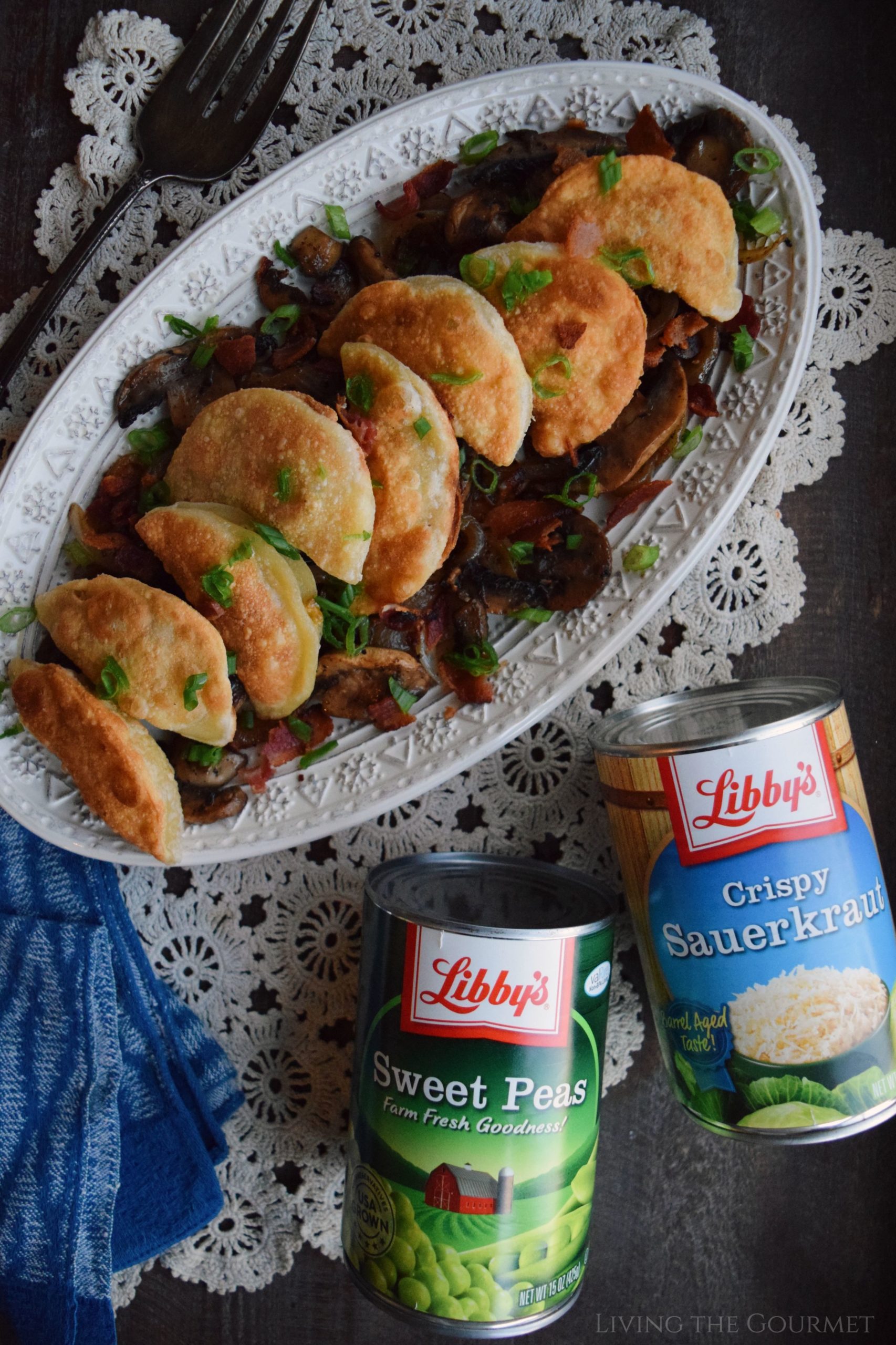 1) What are Pierogi? Pierogi are dumplings made using an unleavened dough, which is then boiled before being either pan-fried or deep-fried (deep frying is more common in the US than in Eastern Europe or Russia). These dumplings typically feature a sauerkraut and potato-based filling, along with some combination of pork, beef, mushrooms, various cheeses, and onions (fresh, fried, or caramelized). However, there really is no ‘rule’ as to what these dumplings are stuffed with, since sweet fillings, such as blueberries and cherries, aren’t uncommon.

2) What’s in a Name? In America, we know these dumplings almost exclusively by their Polish name ‘Pierogi,’ since they entered the national consciousness courtesy of a once-popular brand of premade frozen pierogies. However, these little dumplings are known by a variety of names throughout Eastern Europe, such as ‘varenyky’ in Ukraine, and ‘pirohy’ in Slovakia, to name just a few. No matter what you call them, these dumplings are ubiquitous across the Slavic world, with only minor distinctions popping up regionally across the various local recipes.

3) The Dough. Pierogi typically features a half-moon or crescent moon shape, and are prepared with a basic unleavened dough typically consisting of just flour, eggs, salt, water, and usually – but not always – sour cream. The dough should create a dumpling that’s flaky and crisp on the outside, and tender on the inside.

4) The Cooking Process. While pierogi ‘can’ be served immediately after boiling, this typically is only done when they are being served in a soup, stew, or under a heavy sauce. Even then, most pierogi are pan-fried after boiling to give the outside of the dumpling a crisp texture. Pierogies ‘are’ sometimes deep fried, but this is most popular in the United States, and is only rarely done in Eastern Europe.

5) No ‘Right’ Way. The truth is, there’s really no ‘right’ way to make a pierogi. Some people make them pan-fried, deep-fried, or not fried at all. Some prefer savory fillings that include cheese, potatoes, sauerkraut, and onions. Others prefer sweet fillings that include baked blueberries, cherries, or even raspberries – or some savory take on a fruit filling. Some serve them topped with sour cream, chives, and bacon, or topped with warmed cherry syrupy. Some serve them shaped in half-moons or made in the shape of oversized gnocchi. Some serve in the soup, stew, or under a heavy red sauce, or a heavy white sauce. Still, others prefer them served on their own alongside a pint of beer. All of these pierogies are considered ‘traditional’ and ‘like grandma used to make’ by ‘someone.’ You tell them they’re wrong. In short, today’s pierogi recipe is just one among many, many ways to make these little pan-fried dumplings, so don’t be afraid to experiment to your palate’s, content – because there really is no ‘right’ way to do this…although probably are a few ‘wrong’ ways to do it.

Recreate this recipe and learn more about Libby’s Vegetables here. 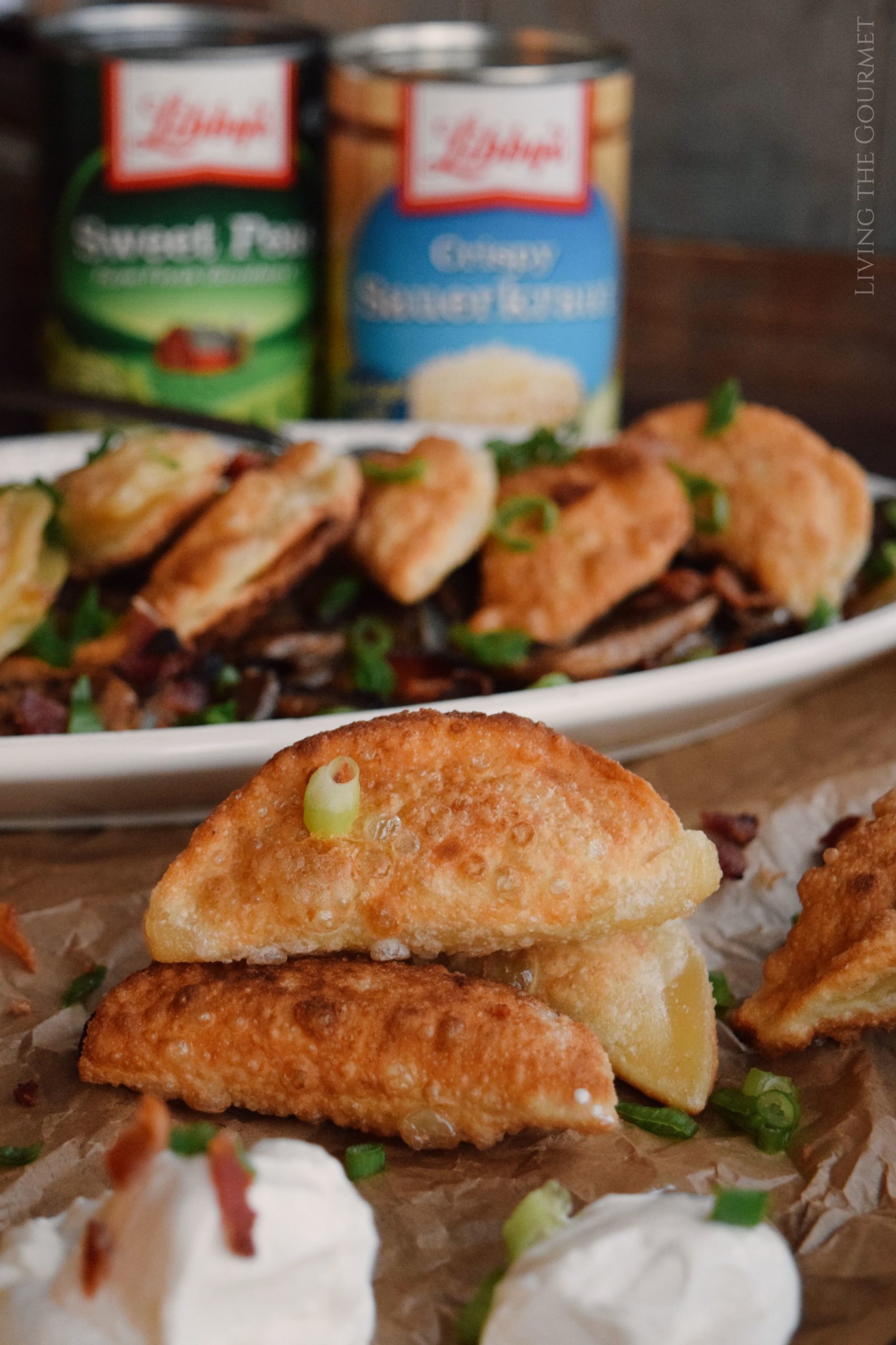 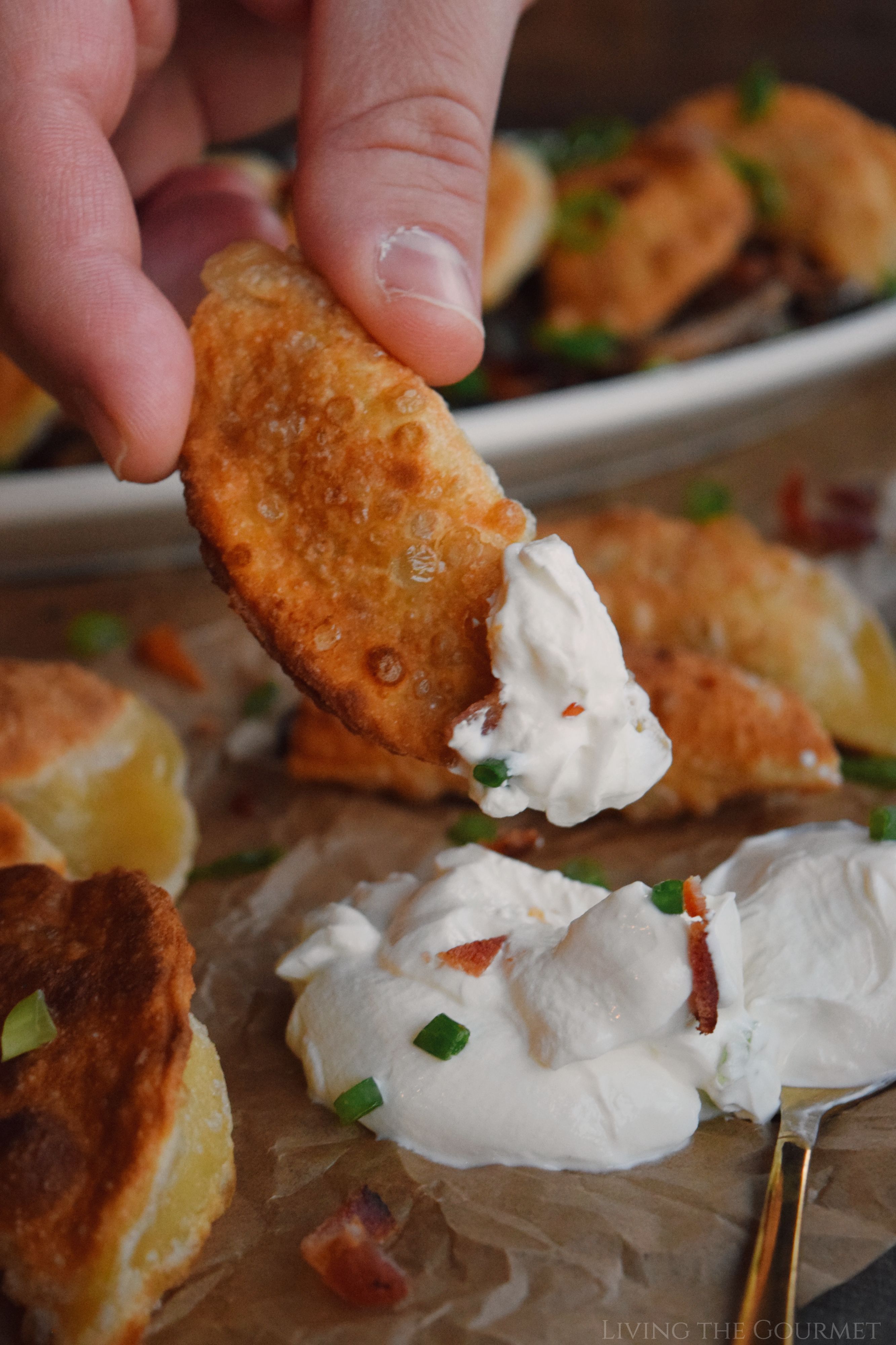 For the Pierogi Dough:
For the Filling:
Toppings:

For the Pierogi Dough:
For the Filling & Making of Pierogis:
For Serving: 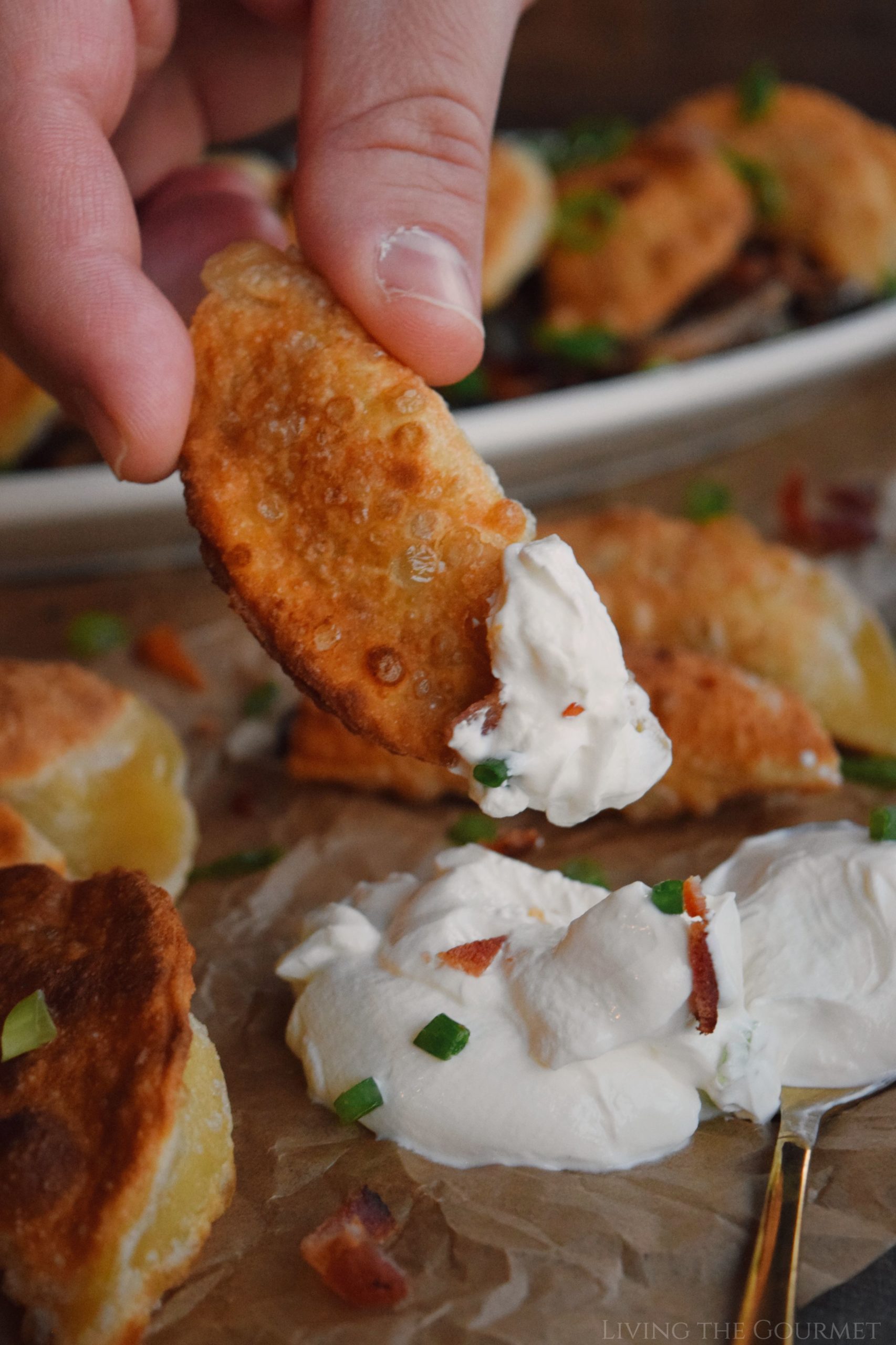