Today we’re preparing one of life’s classic comfort foods – pierogi, which are always a favorite in my home during the holiday season. We’ll be preparing ours ‘classic style,’ with a mashed potato and sauerkraut stuffing, along with sausage, cheddar cheese, peas, and garlic, and then serving them with a topping of sour cream, bacon, and chives.

I love pierogi since they’re fun to make, easy to get creative with, and are beloved by palates of all ages.  Basically, they’re one delight the entire family can enjoy, and there’s no limit to what you can do with them.

Now, without further introduction, let’s dive right in, because we’ve got a lot to cover.

Pierogi are dumplings made using an unleavened dough.  These dumplings are then boiled before being either pan-fried or deep fried.  Deep frying pierogi is more common in the USA than in Eastern Europe.

These dumplings typically feature a sauerkraut and potato-based filling, along with some combination of pork, beef, mushrooms, various cheeses, and onions.  The onions can be fresh, fried, or caramelized.

With all of that said, however, there really is no ‘rule’ as to what these dumplings are stuffed with, since sweet fillings, such as blueberries and cherries, aren’t uncommon.

Building Your Pierogi – Tips and Notes

Ingredient Checklist For the Dough

Ingredient Checklist for the Filling

Ingredient Checklist for the Topping 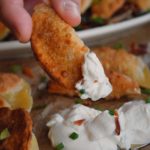 For the Pierogi Dough:

For the Pierogi Dough:

For the Filling & Making of Pierogis: