Spruce up your holiday menu with these elegant and easy Truffle Goat Cheese & Pignoli Crostini topped with Candied Fresh Cranberries! 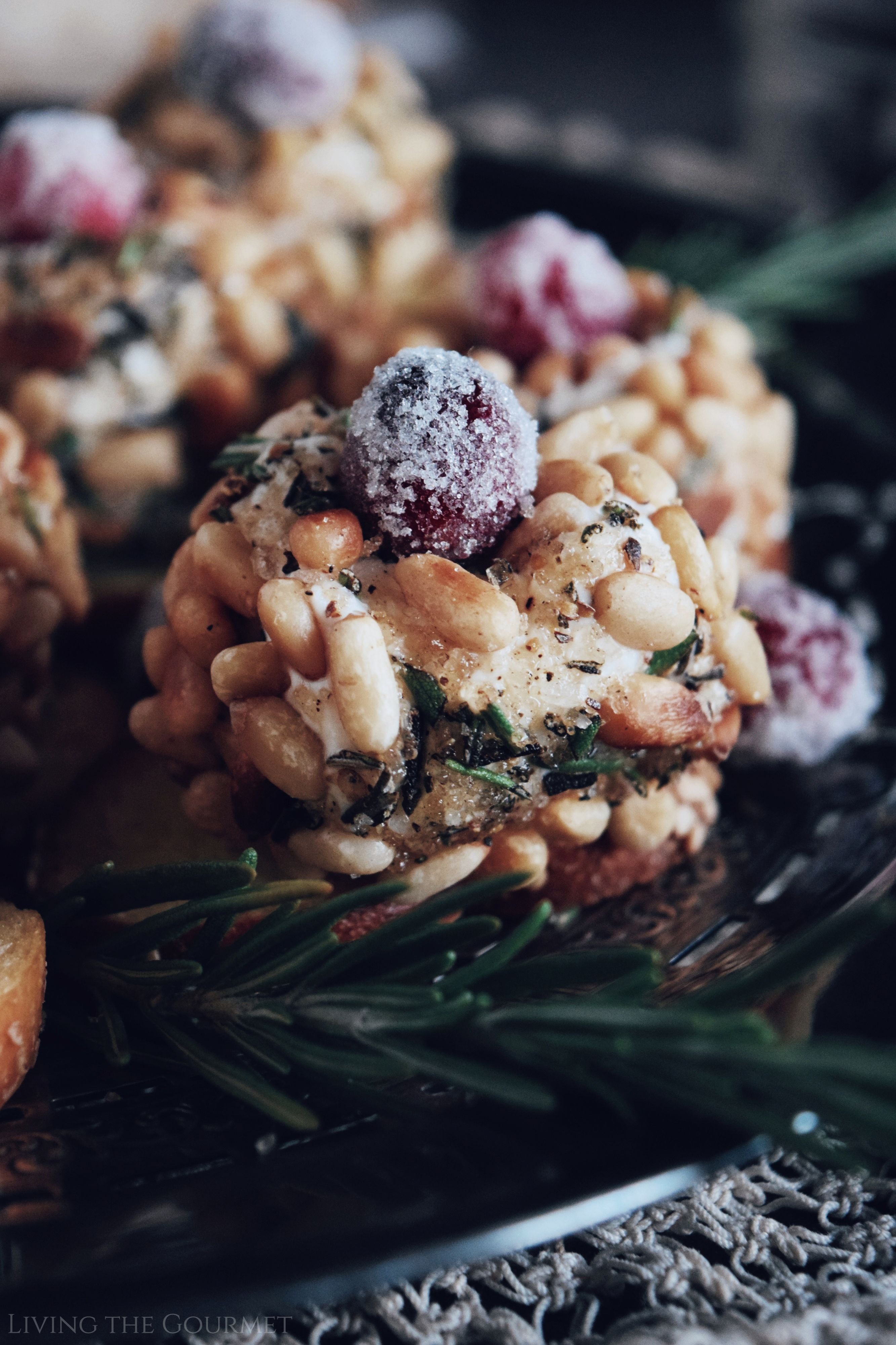 The focus here on Living the Gourmet for the past couple of posts has been piecing together a Thanksgiving table from starters to wine to creative bread suggestions and (soon!) to the main course – and today we’re adding another piece to our delicious holiday puzzle.

However, we’re going to be doing so in three parts. You see, what I love about today’s recipe is that you can separate any of its three core components, and serve them on their own. What’s this recipe you ask? Prepare yourselves for an epic mouthful of a recipe title – Pignoli Crusted Truffle Goat Cheese Crostini topped with Candied Cranberries. 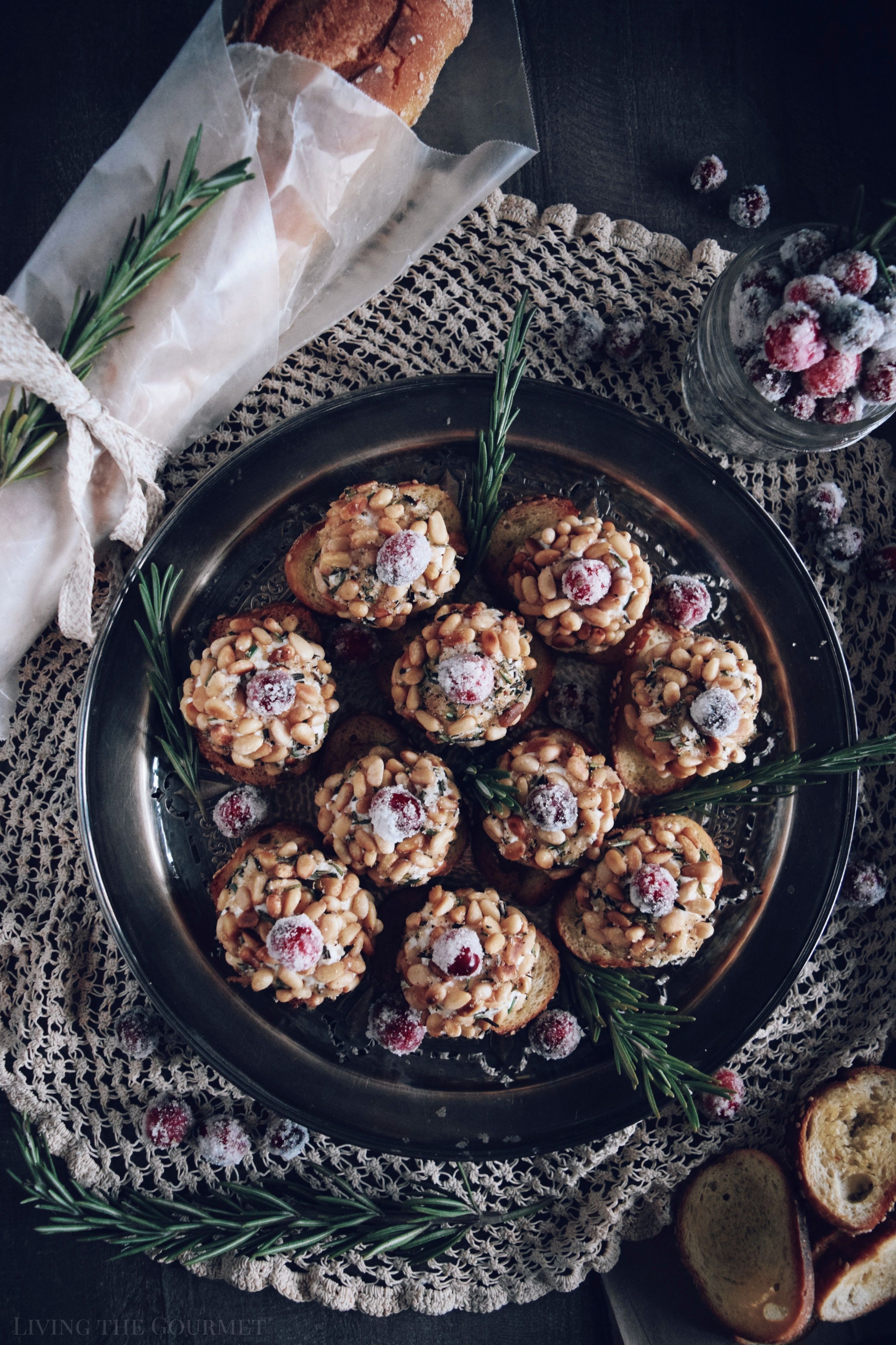 The way I originally came to think of this recipe in ‘parts’ was actually quite by accident. I had prepared the candied cranberries, and just as they were setting, my son decided to venture down from his office in search of something to snack on, and he was absolutely fascinated with these little red delights. He tasted one, and then a second, and then promptly downed a handful of them. “These are like candy!” he proclaimed. “Better then candy, they’re crunchy and juicy, sweet and sour, all at once! You know what, we should serve a big bowl of these on their own at Thanksgiving,” he suggested, as if he had just ‘discovered’ on his own the appeal of candied fruit. Naturally, I informed that I ‘did’ in fact plan on serving the Thanksgiving recipe I had just prepared…at Thanksgiving, to which he seemed both oddly and happily surprised.

However, after thinking about his suggestion for a second or two, I realized he actually might have been on to something – but not in quite the way he had intended. For example, today’s truffle goat cheese bites could easily be served on their own as ‘single serve’ spreads for dinner rolls, while the crostini could be served alongside oil or topped with the typical array of your favorite crostini toppings, and as for the candied cranberries, on their own they actually are quite good, and look absolutely fantastic as edible decorations. Pair them with an aperitif and pleasant conversation, and you’ve got a winning combination.

With that being said, let’s put the pieces of this recipe together, and complete our LTG Thanksgiving appetizer spread. 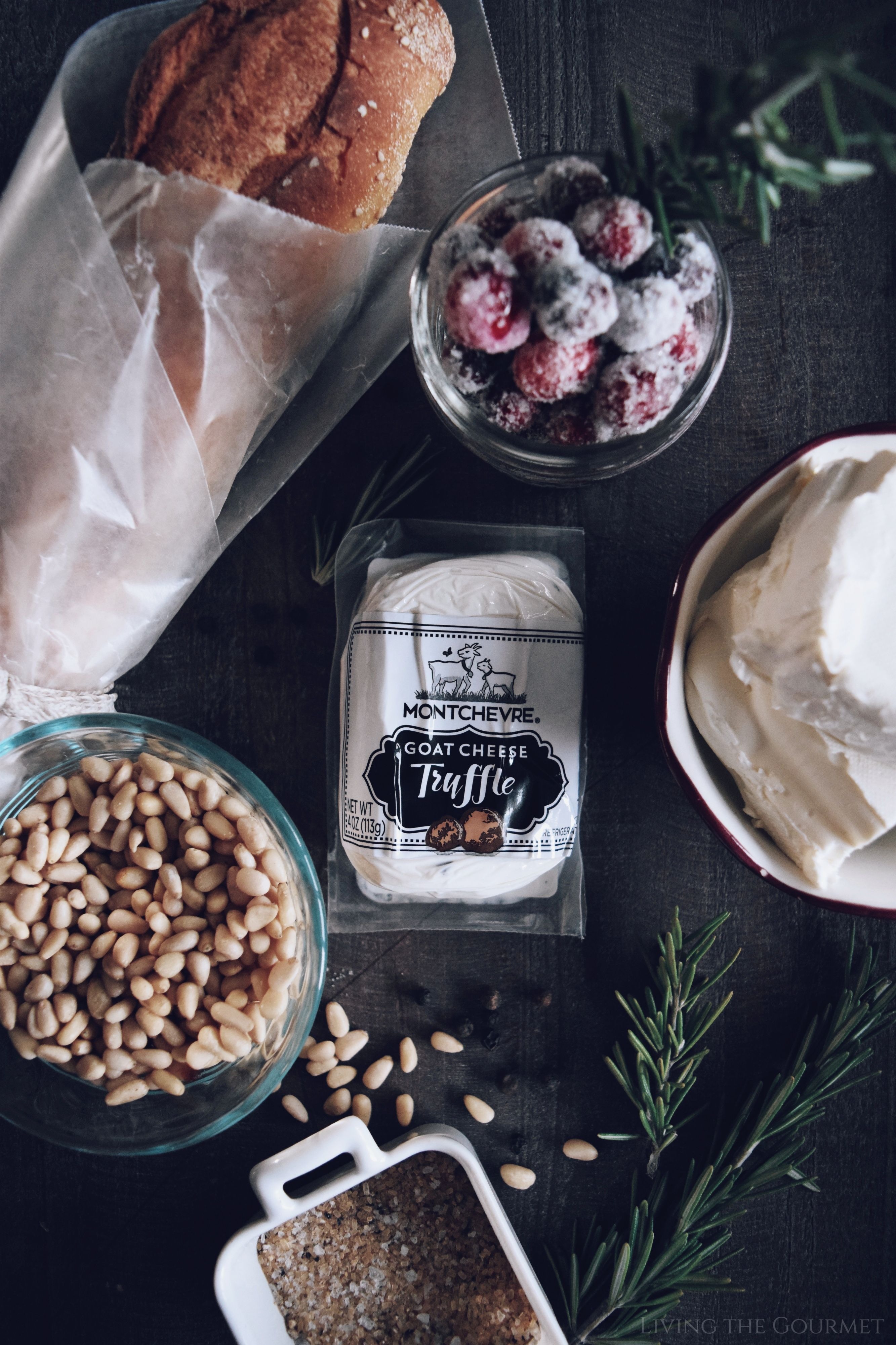 To start things off, we begin with the crostini. Begin by slicing a loaf of French bread to about a quarter of an inch in thickness – but really this about the maximum thickness you’ll want on these. Then, crush a clove or two of garlic (I prefer several), and then heat the crushed garlic in about a half a cup of olive oil over a gentle heat. Then arrange the sliced bread over a baking sheet, and brush both sides of each bread slice with the oil. Then bake for about 8 minutes at three-hundred and fifty degrees, or until a light golden color is achieved. 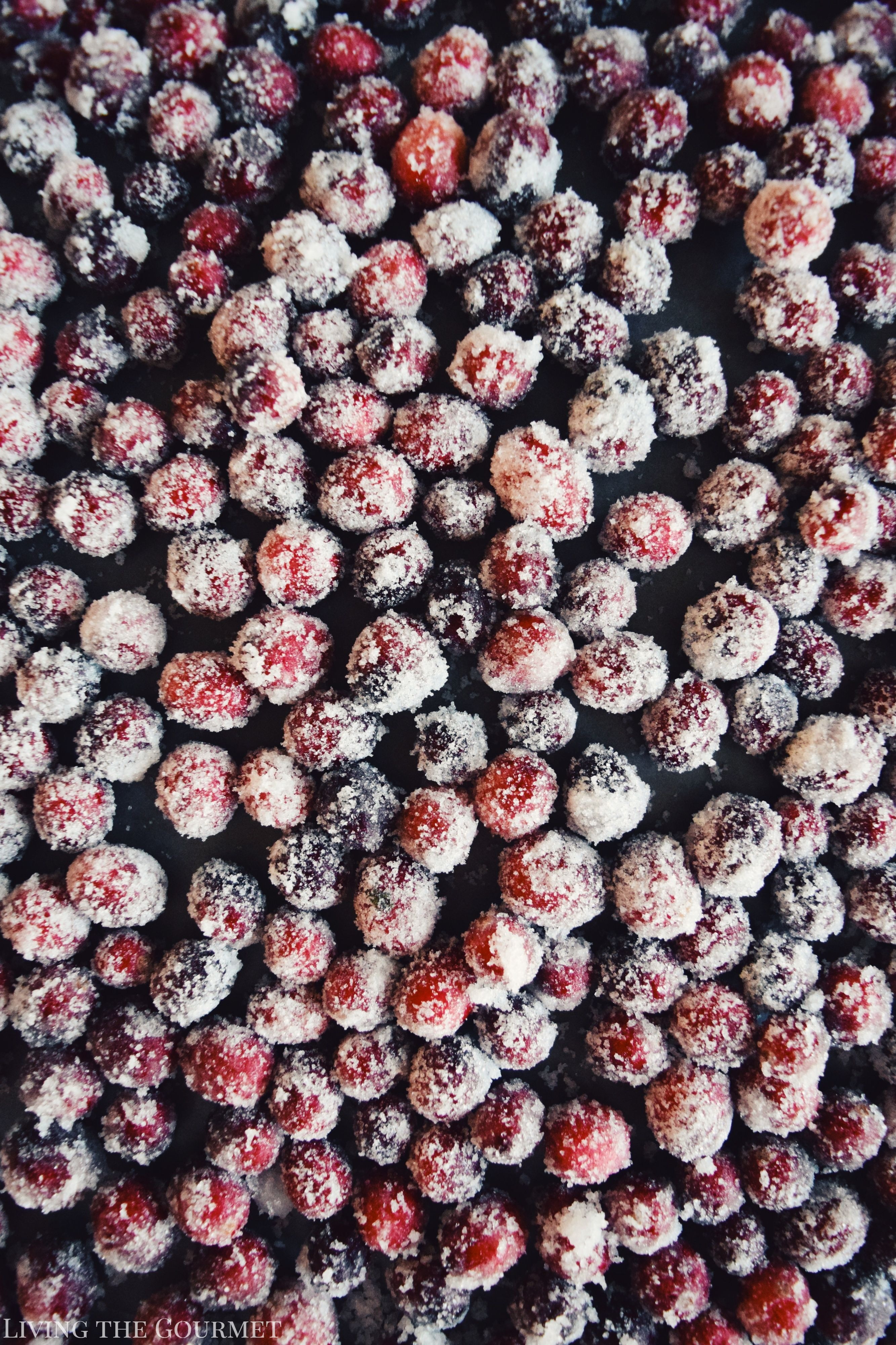 Now, for the candied cranberries. Set a medium saucepan over medium-low heat, combine an orange peel with sugar in plain water, and stir that until the sugar has completely dissolved into the water. You don’t want the water to become hot during this process – you want it warm. If the water is ‘hot,’ you will ruin your cranberries as they will pop open. Now, pour in the cranberries, cover with a plate to ensure they are fully submerged, and then let the cranberries sit like that in the fridge overnight. Once they have sat overnight in the syrup, shake the cranberries in a covered container with sugar, then set them out on a baking sheet lined with parchment paper, and let them sit out in the open to harden for at least two hours or longer. On a side note, you can save the syrup for punch or as a mix in drinks. 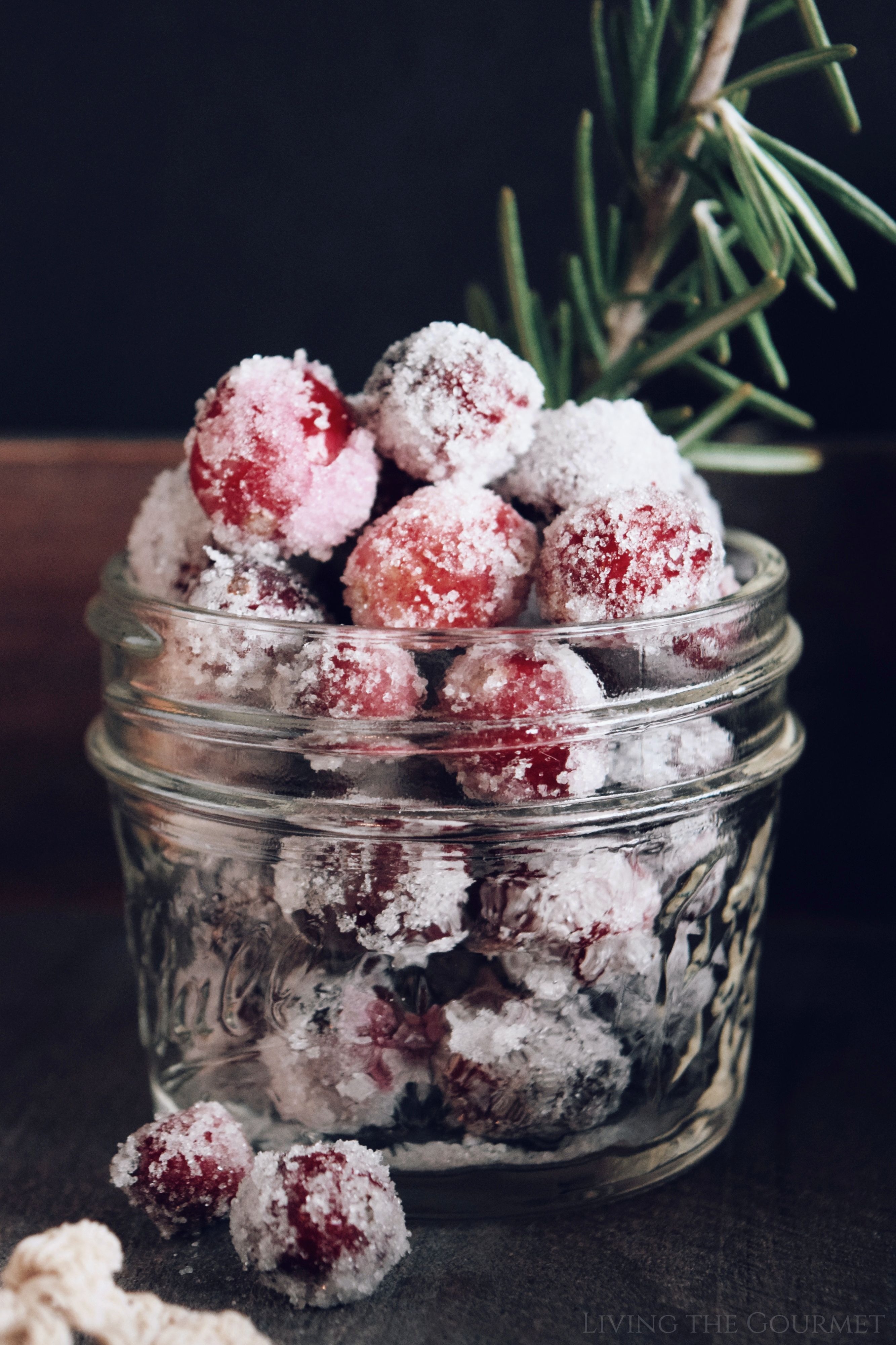 Next up, we come to the goat cheese bites themselves. For today’s recipe, I’m using a Montchevre Goat Cheese Log, in the truffle variety. This is a high-quality goat cheese, and is reliably flavorful. Goat cheese itself is preferable for this recipe since it’s slightly more tart and earthy in flavor than cow’s milk cheese, meaning it will complement the oiled crostini quite nicely, and meld into the overall autumn flavors that we’ve been putting together for our spread over the past week. As a nice bonus, goat cheese is quite nutrient dense, being packed with calcium, vitamin D, and being high in protein, while containing less lactose then its cow’s milk counterpart. 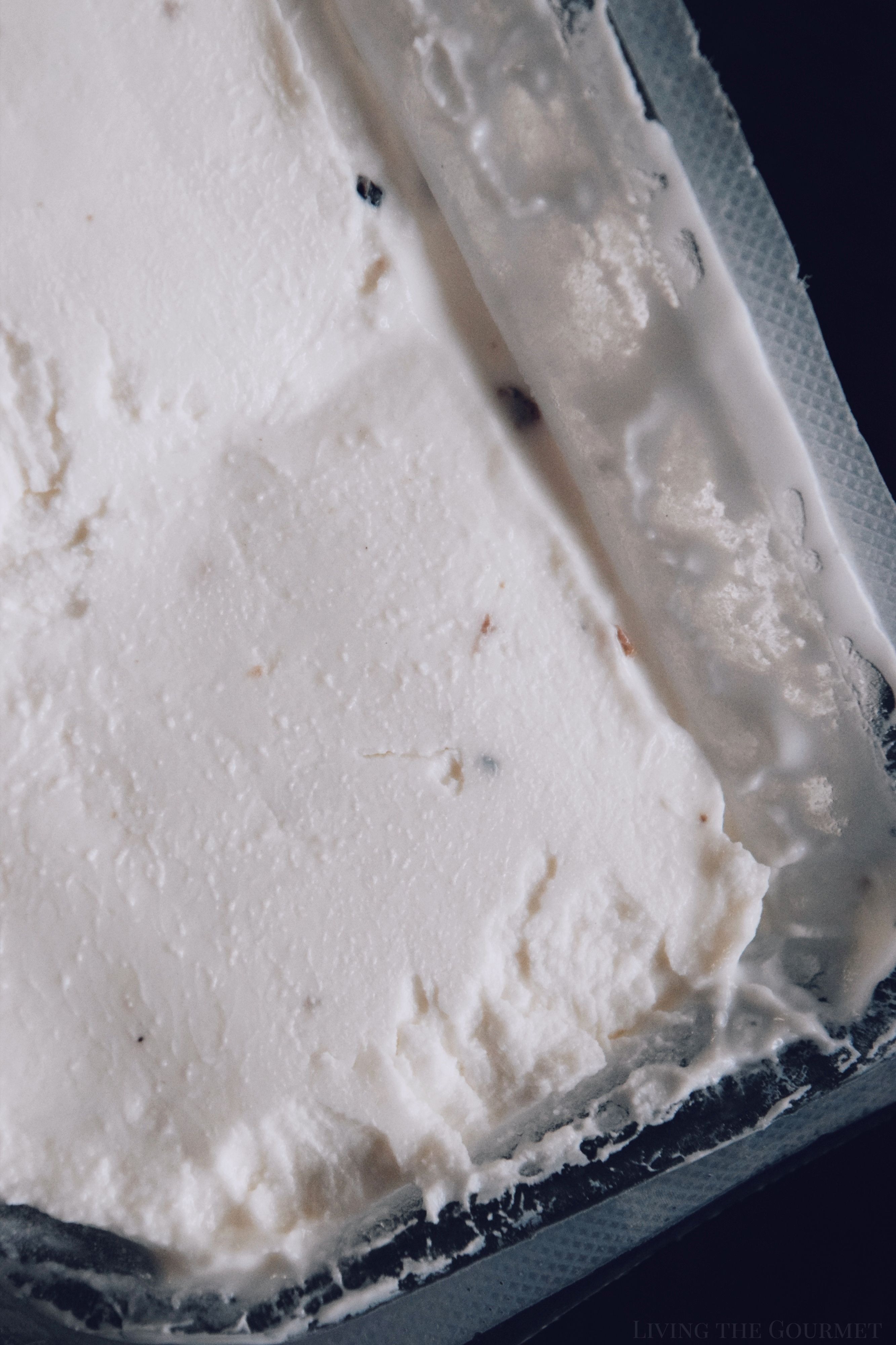 For the bites, the first thing you’ll want to do is to gently roast about a cup of pignoli nuts in a cast iron frying pan – dry. You want to achieve a light golden coloration – which translates to less than two minutes of roasting. After that allow the nuts to cool, and then combine them in a bowl with fresh rosemary, raw sugar, coarse salt, and a dash of fresh ground black pepper.

Finally, blend the goat cheese with the cream cheese in a food processor until smooth and creamy, then pop into the freezer for about twenty minutes or so, or place in the refrigerator for about an hour so that the cheese will be manageable to roll into balls. 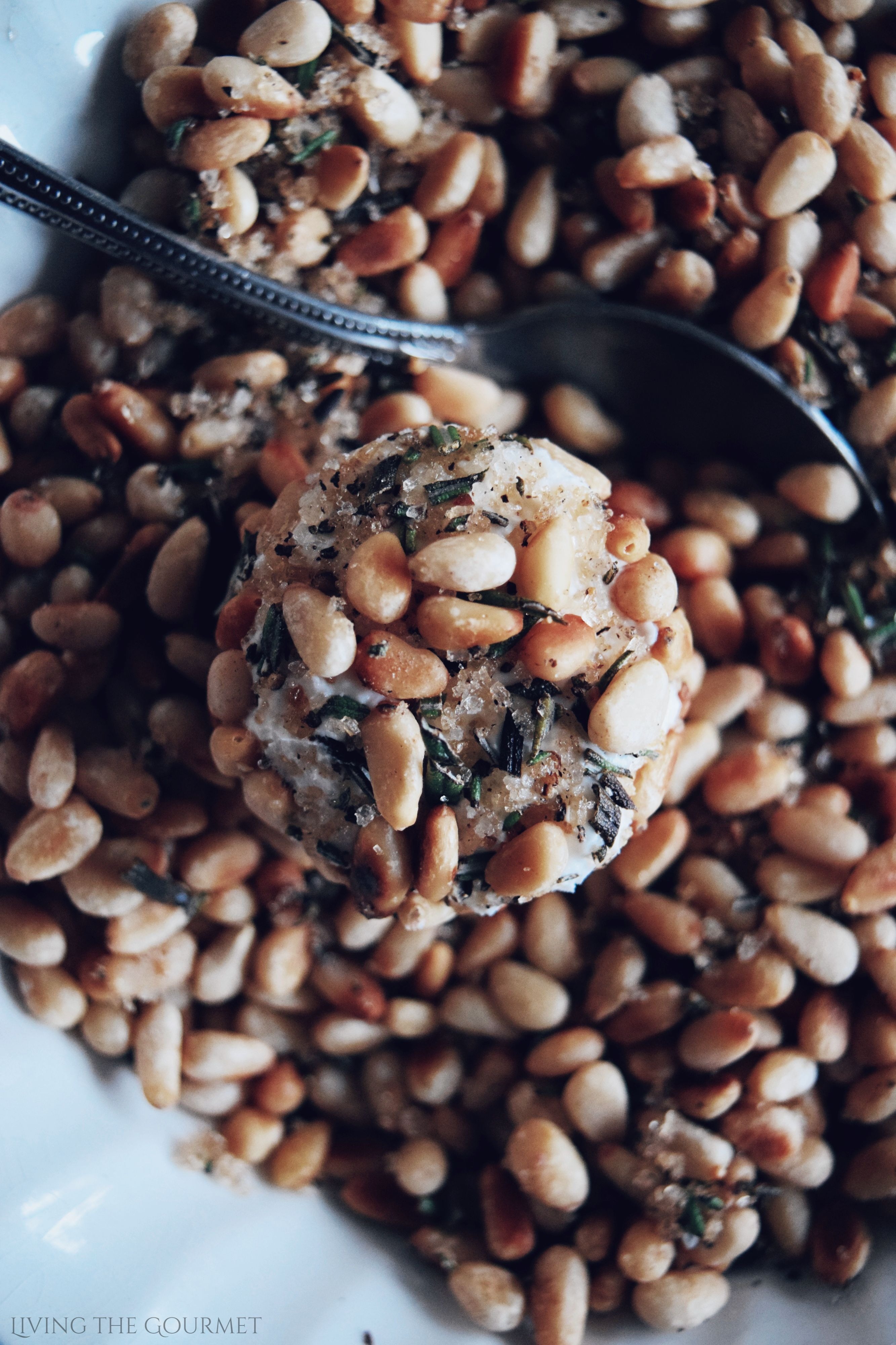 Then, using a tablespoon, portion out the goat cheese, roll them into balls, and then roll them in the pignoli nut mix, then you may reshape into balls. Then set them on the crostini, top with a candied cranberry, and serve immediately or refrigerate until ready to serve. 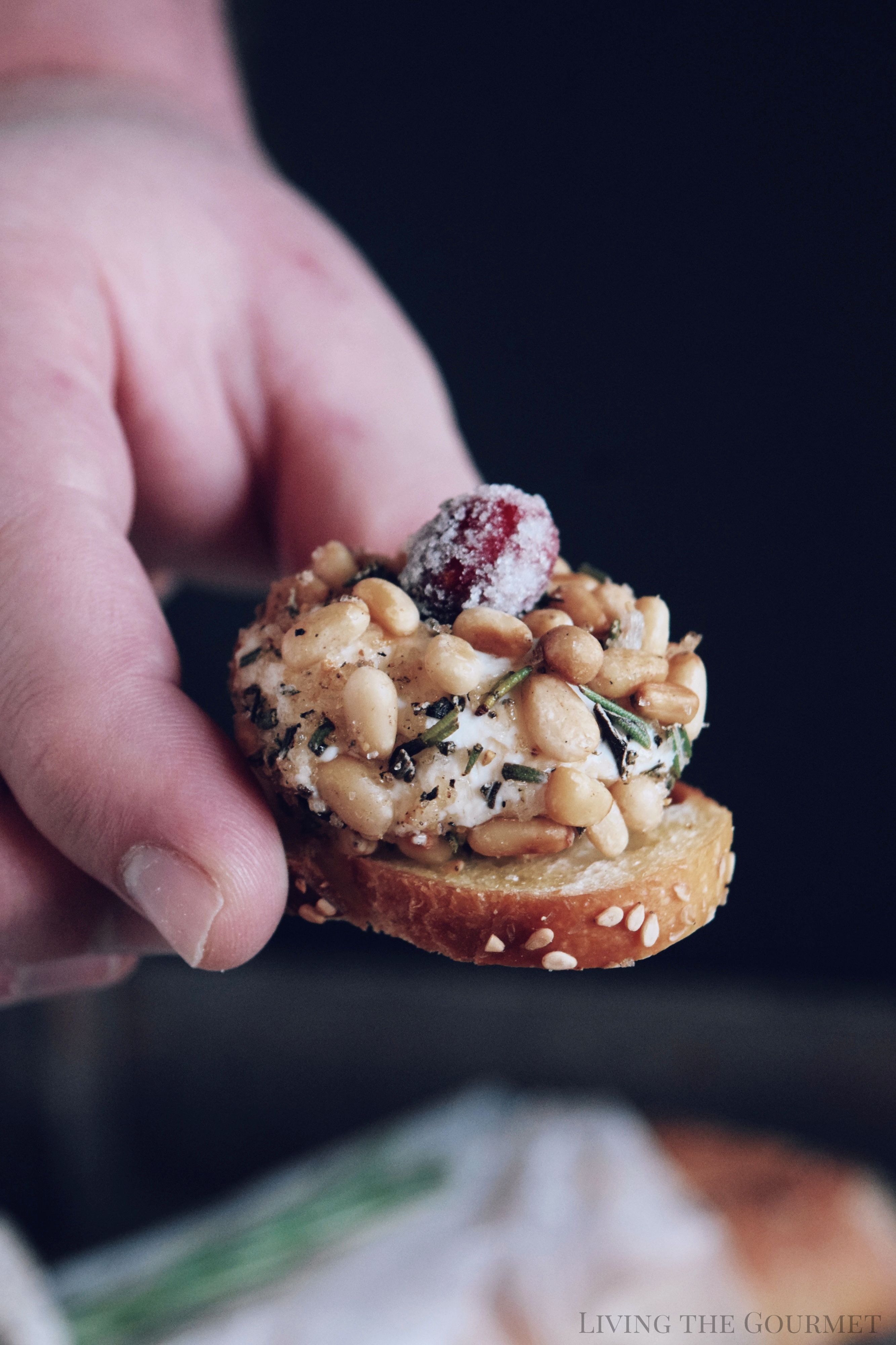 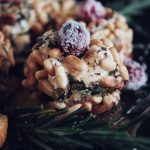 For the Cheese Mixture:

For the Outer Topping:

For the Cheese Mixture:

For the Outer Topping:

Prep Time does NOT include Inactive Prep Time for Candied Fresh Cranberries. 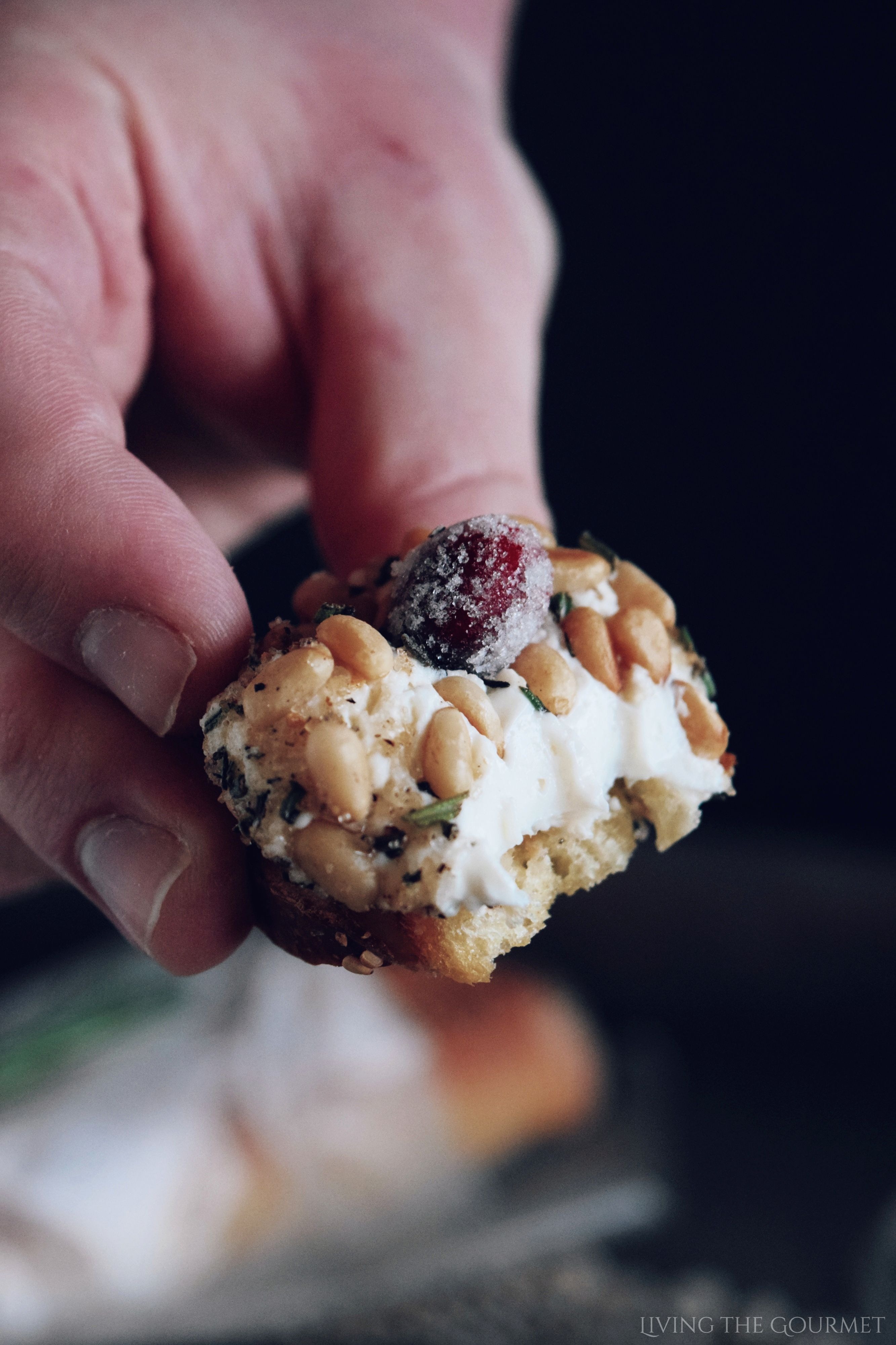 And just like that, you’ve got a delicious 3-in-1 Thanksgiving recipe.

For more info on Montchevere Goat Cheese, or to purchase, use the STORE LOCATOR to find a retailer near you!