This post has been sponsored by Lamole di Lamole. All opinions expressed are my own. Please enjoy responsibly. 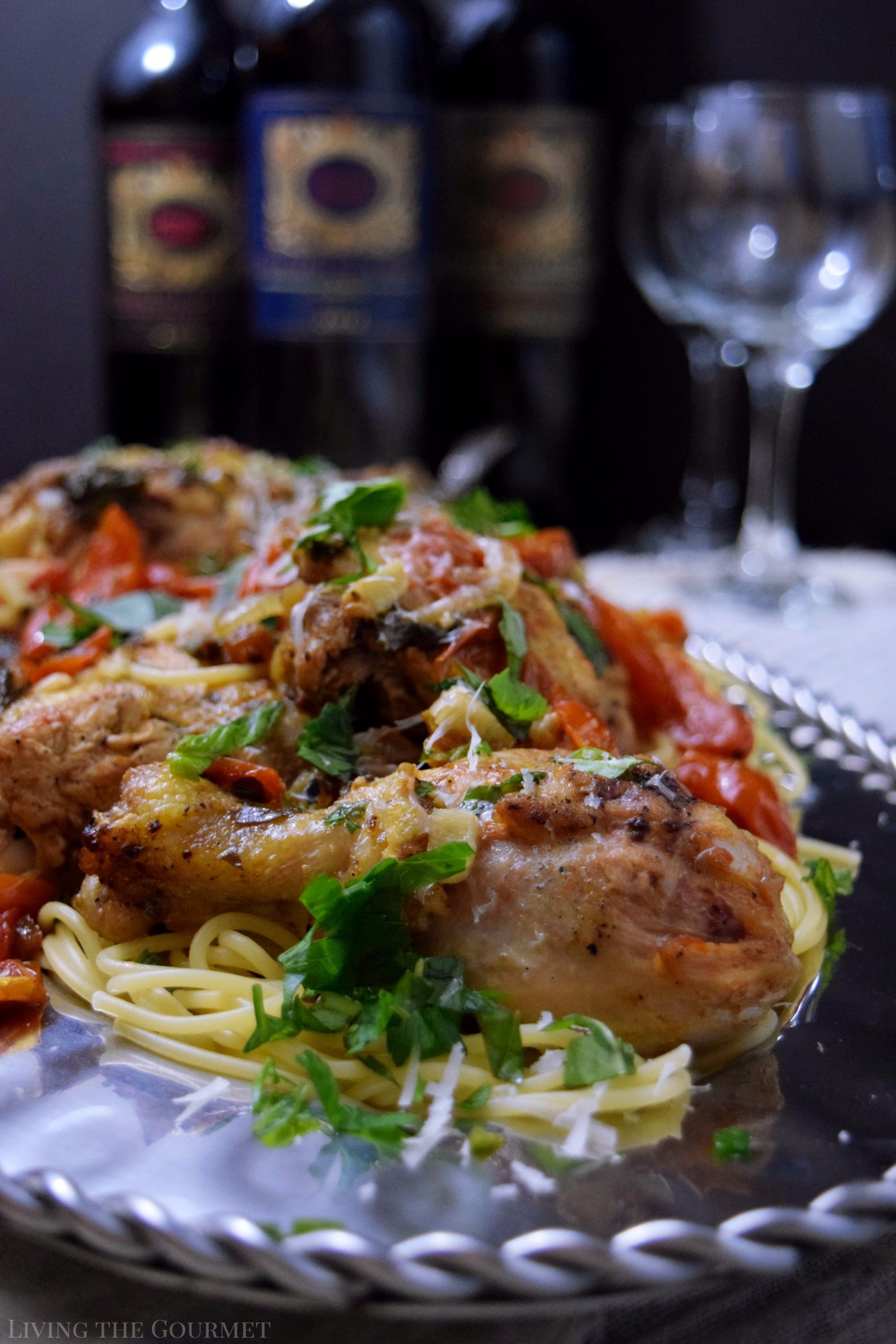 Last month I wrote about some of the types of wines that I grew up with in my first-generation Italian family. Liqueurs such as Sambuca, amaretto, and limoncello were ever-present, while the wines were a predictable assortment of Sangiovese, Sagrantino, and of course Chianti. Back then, these were all imported by necessity, since the American wine and liqueur scene at the time was still quite young, and almost exclusively ‘Anglo-Franco’ in its focus.

Naturally, while both myself and my family have broadened our menu, both of my brothers still prefer their Sambuca to, well, pretty much any other liqueur, and I still find myself preferring the familiar aroma and warmth of a quality anisette.

However, while my family’s wine menu is very often a trip around the world, we almost always come back to ‘the standards,’ such as sturdy Sagrantino or a quality Chianti for our holiday dinners or a relaxed Sunday evening. That, of course, brings us to brings us to today’s wines, a trio of Tuscan Chianti Classico labels from the Lamole di Lamole winery, whose representatives contacted me some weeks ago asking if I would be interested in putting together a meal pairing for them. Naturally, I agreed. 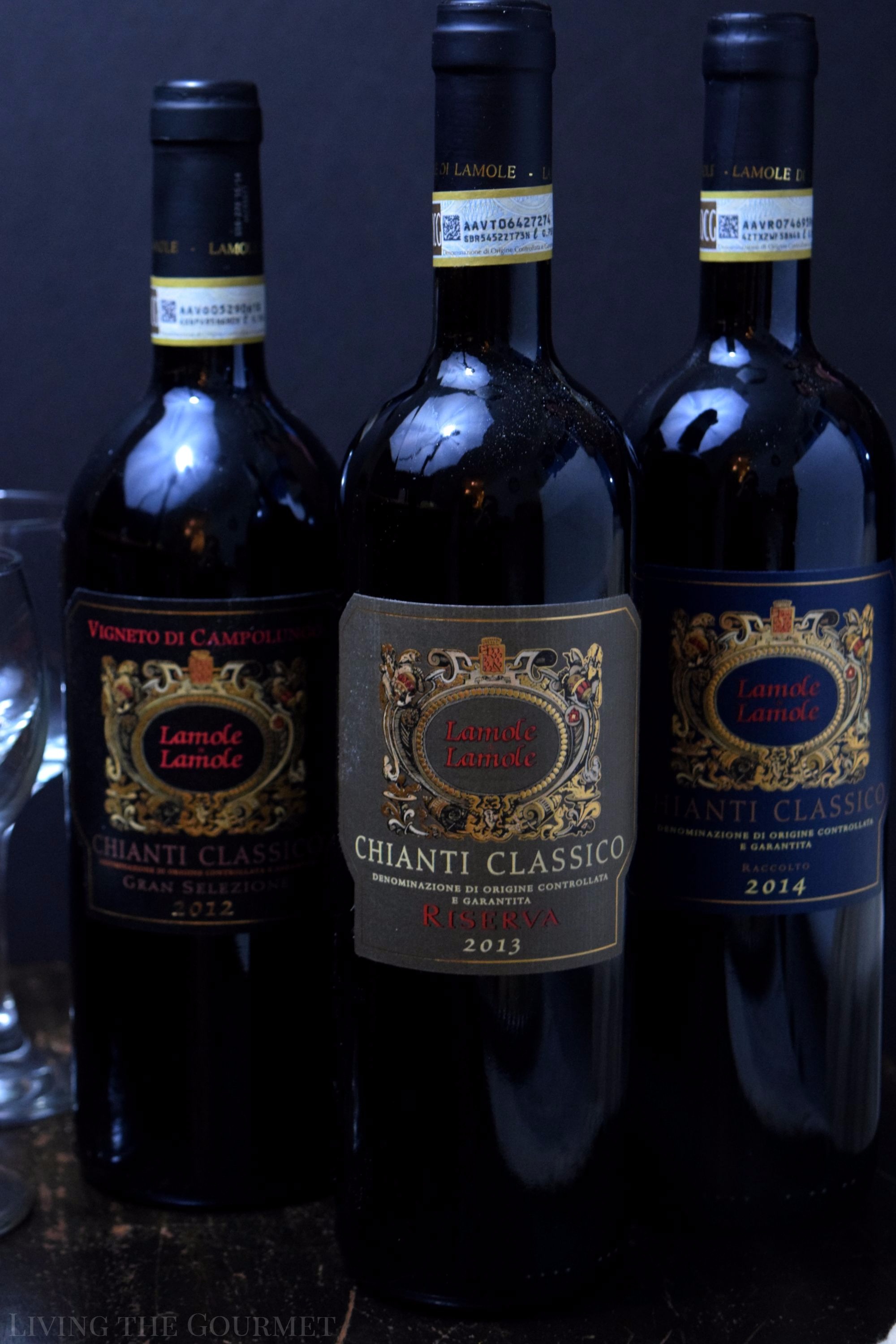 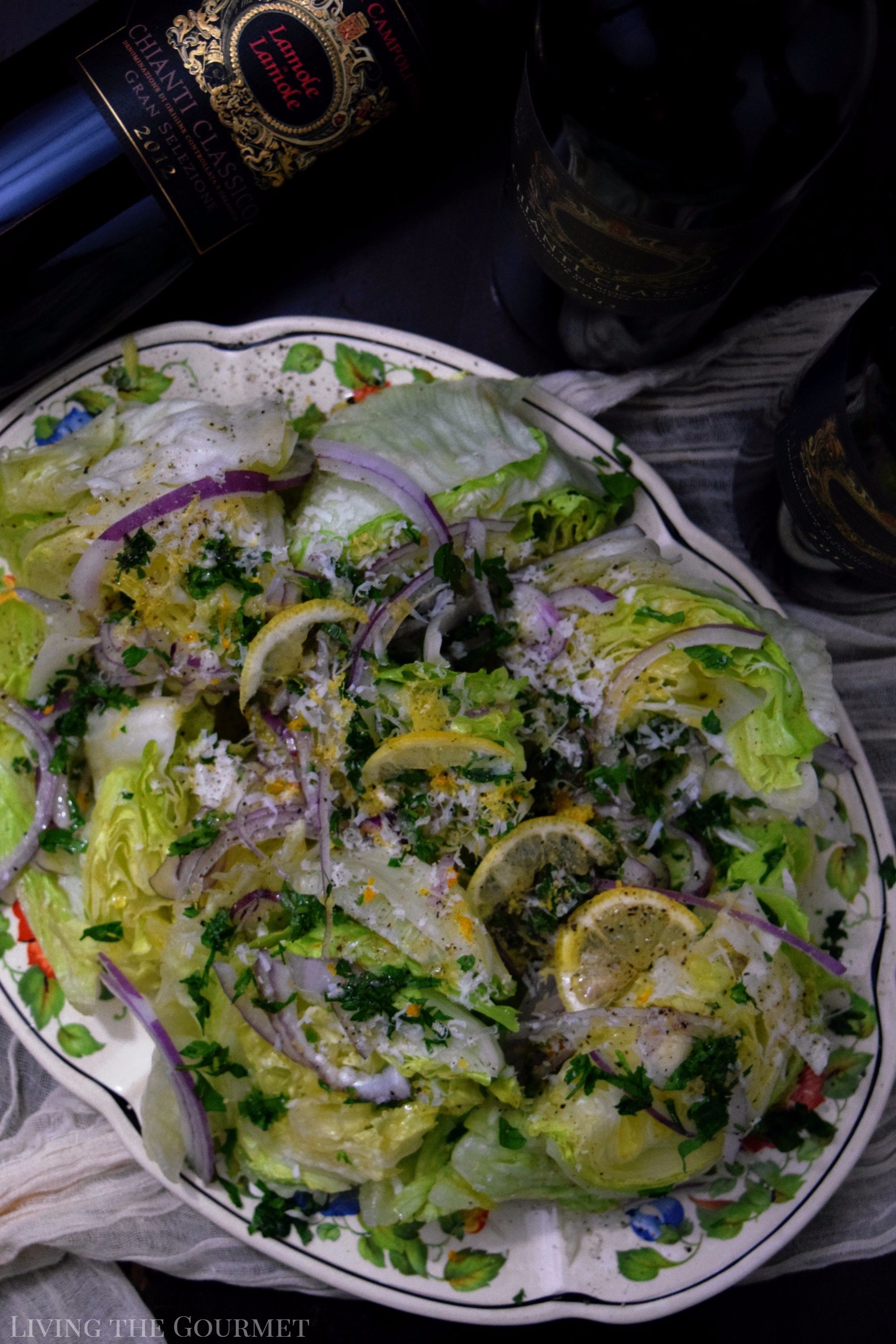 With that out of the way, we begin at the top, the 2012 Gran Selezione Off the top of the glass, the wine introduces itself with spicy aromatics, with hints of clay or soil and leather becoming prominent deeper into the glass. On sampling, the wine is instantly smooth, with dark fruit washing across the palate with very vague hints of cherry and vanilla popping up every so often. The finish is pleasant and lasting, with hints of herbs and tobacco closing out the experience.

Next up, the Riserva. On pouring, the wine greets with dark berry aromas, with dried floral accents or light herbal notes propagating in the background, and intensifying deeper into the glass. On sampling, while an assorted berry palate is immediate, particularly wild berry or cut black berry, cinnamon or perhaps muted spice notes are also quite evident. The mouthfeel is smooth and pleasant, with a very lasting finish. 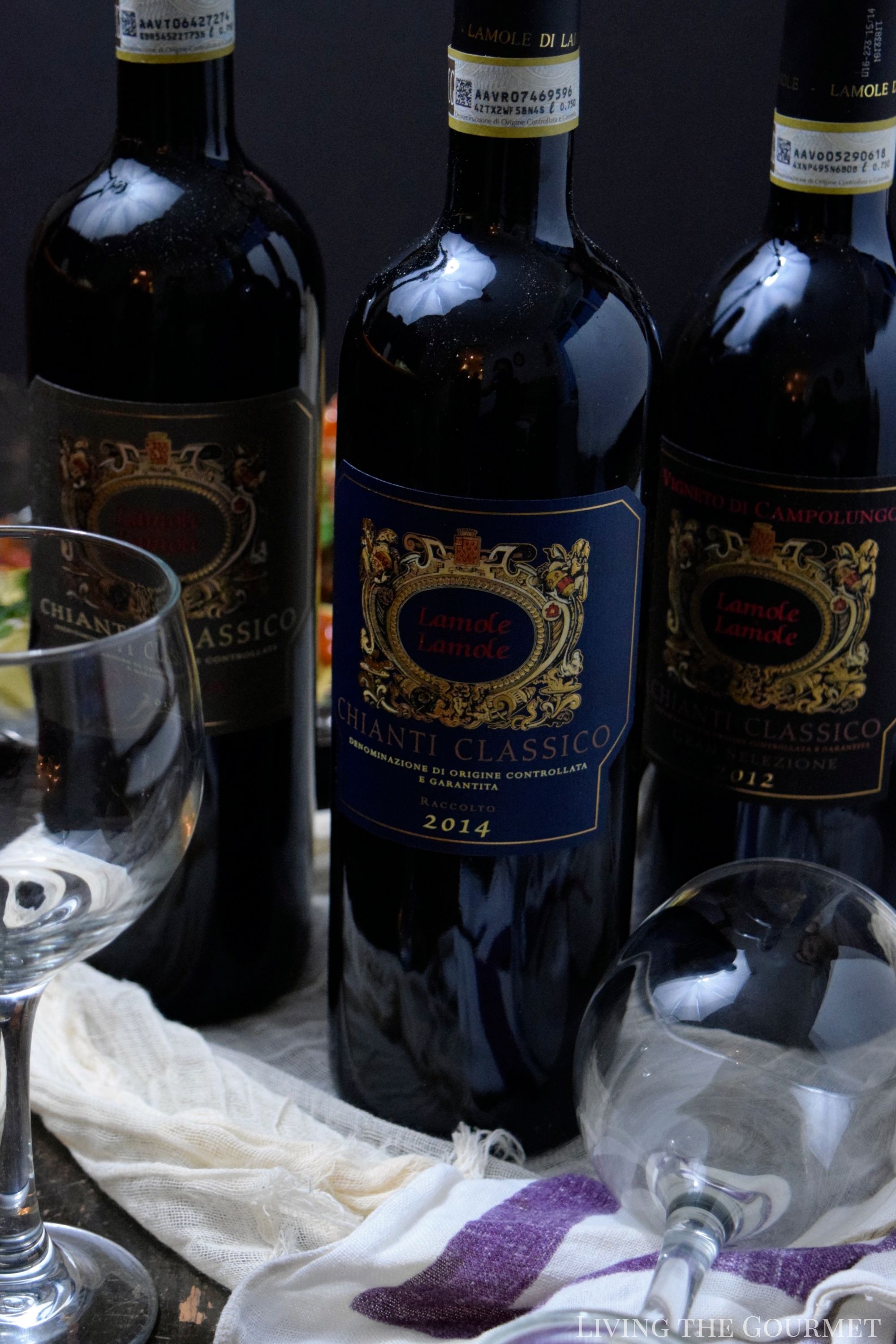 Finally, we come to the 2014 Chianti Classico. The wine introduces itself with an instantly earthy aromatic profile – think soil, wildflowers, and just a hint of zesty menthol, with fruit essences perforating deeper into the glass. On sampling, the wine is a largely by the book Chianti Classico, featuring dark berry mixed with dried spice carried on fine tannins, with a pleasant licorice finish.

That said, to pair with any of these three wines, I decided to put together Chicken served with a Fresh Tomato and Basil Sauce, alongside a Lettuce Wedge Salad with parsley, honey, and parmesan. Yes, I practice what I preach. 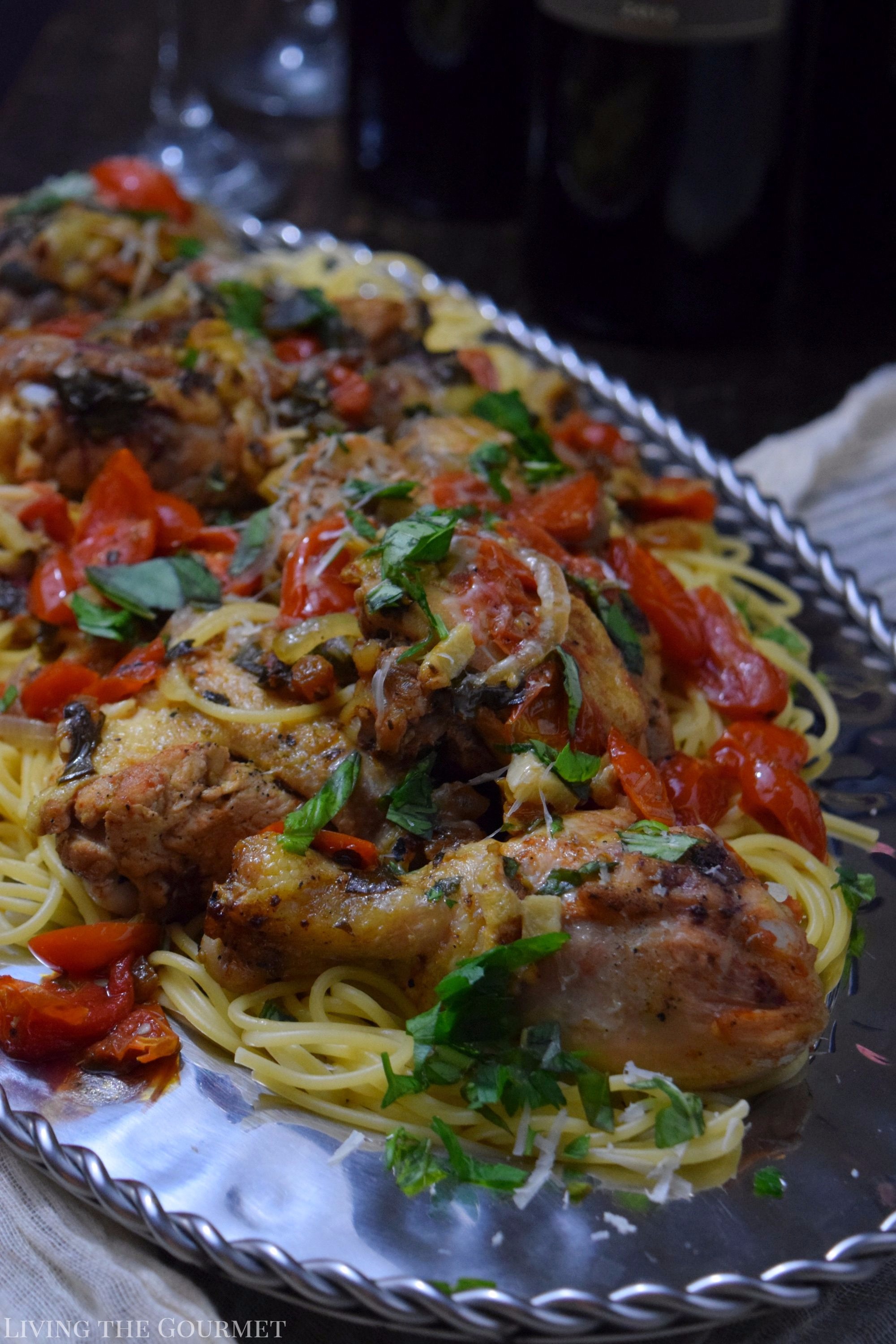 To start things off, we place the sliced chicken in a large bowl and season with salt, pepper, and paprika, and then drizzle with olive oil and toss as shown below.

While we let the chicken sit, we heat a large cast iron frying pan with butter, and then set the chicken in the pan to brown. Once the chicken has browned, remove it from the pan, and then add a bit of olive oil into the pan with the garlic and onions, and toss that on low heat until the garlic is nice and fragrant. Then add a bit of wine to the pan, and let that sauté until the wine begins to evaporate, and then quickly add in the tomatoes, parsley, basil, bay leaf, and chicken broth, and allow that simmer on low heat for about twelve minutes, at which point you’ll want to add the seasonings listed below with the raisins.

Then add the browned chicken to the sauce, and cover, and let that cook together over a low heat for about forty-five minutes to an hour.

While the chicken is cooking, you’ll want to prepare the wedge salad as directed below, platting it with nice drizzle of honey and olive oil.

Then simply prepare your preferred pasta, and you’re ready to serve.

For the Iceberg Wedge Salad: 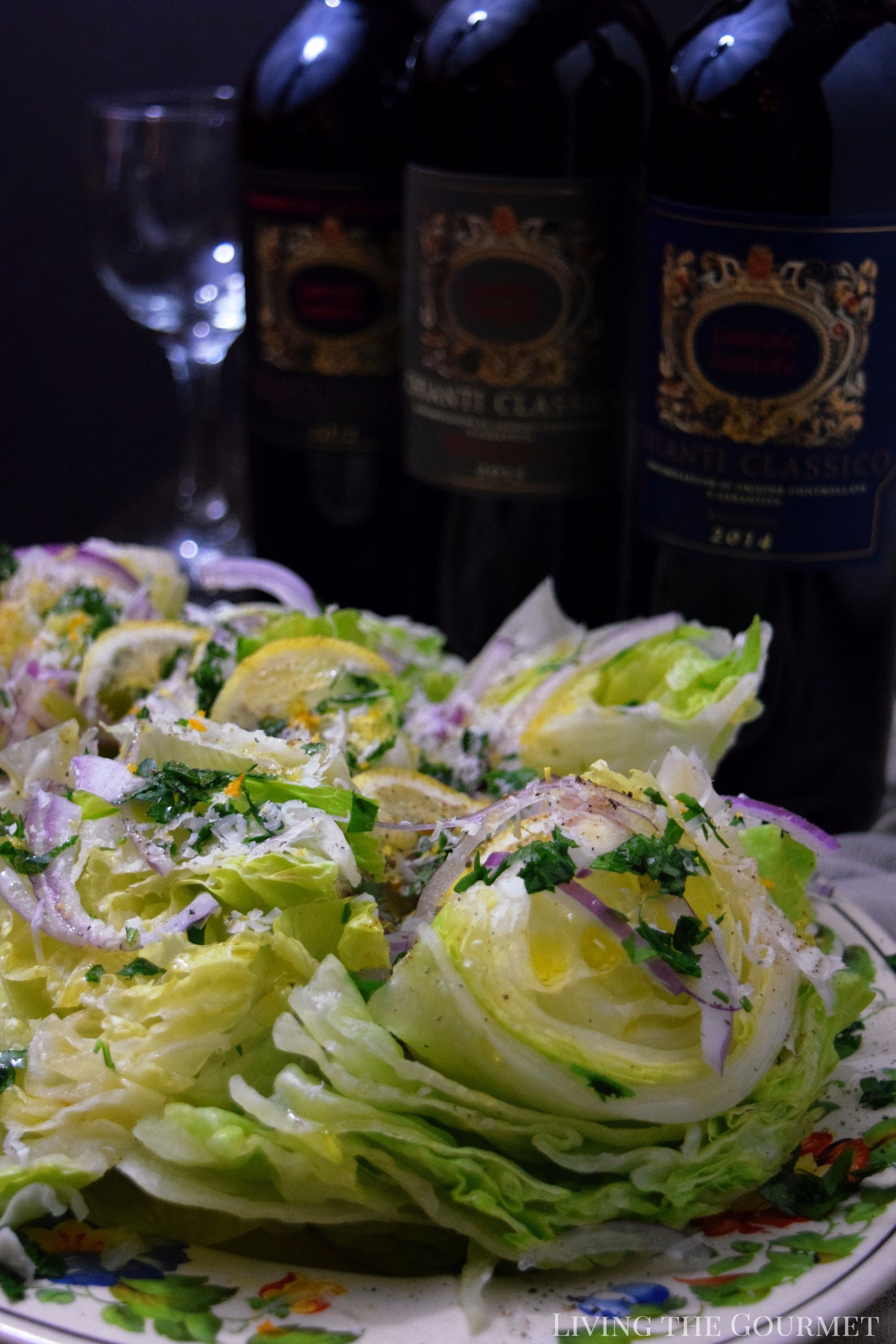 That said, I can wholeheartedly recommend the wines of Lamole di Lamole to any of my readers looking for quality Chianti at a reasonable price.