Spatchcocked Chicken is a simple technique that will guarantee a perfectly cooked chicken throughout. Grill it up on the BBQ for a delicious and easy meal. 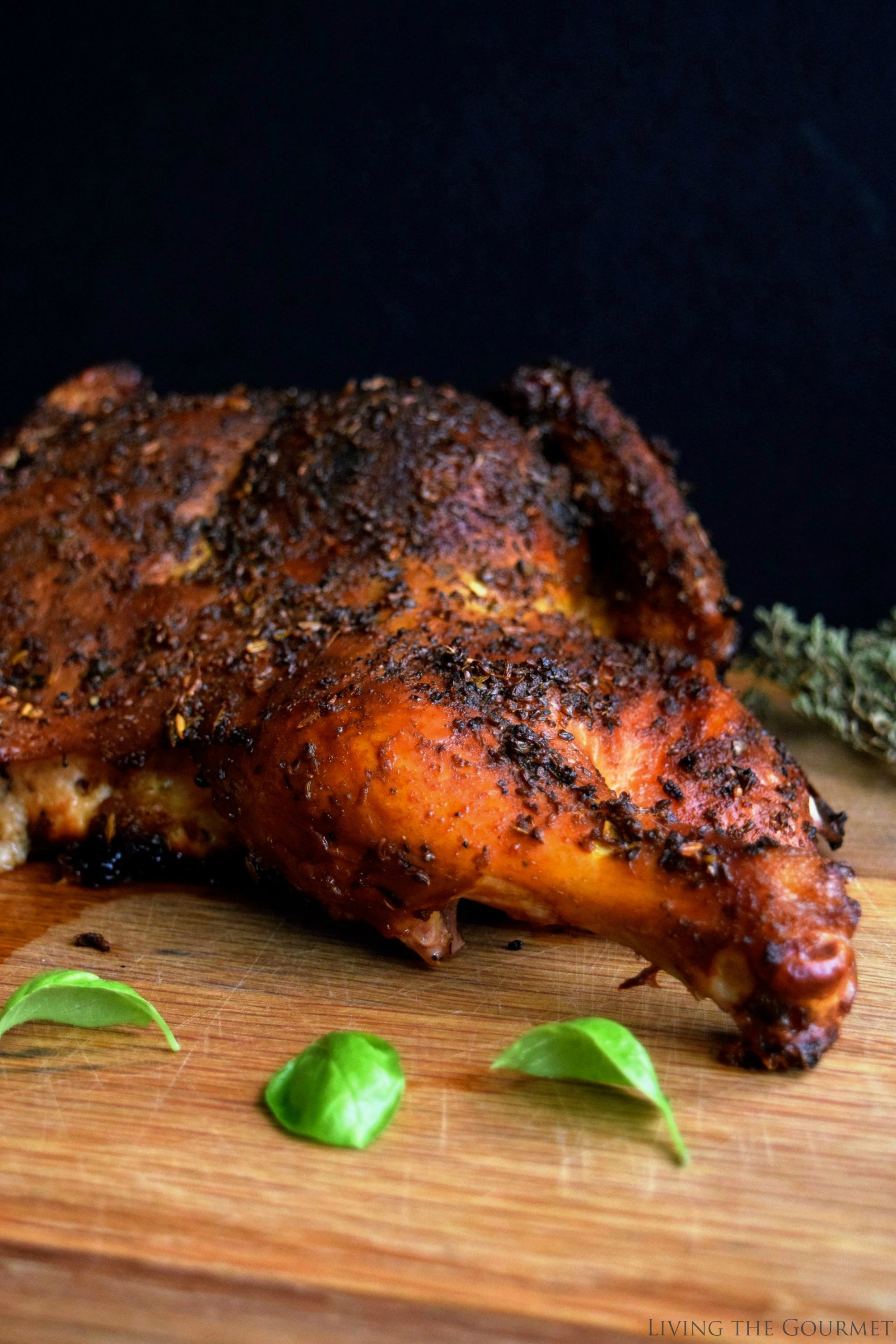 “Fashion and the fashionable serves a duel and competing purpose,” I recall one of my professor’s commenting on society. “On the one hand, it serves to decide what is mainstream, it sets society’s tone and perception, coloring what is ‘acceptable’ or even ‘laudatory.’ Meanwhile, ‘fashion’ is what defines the contrarian lives of the dissenting bohemians among us, giving cause and target to society’s critics.”

I’ve spoken here before a couple of times about “everything old being made new again,” and that was brought once again to my attention the other day when my daughter pointed how many varying iterations of ‘spachcock chicken’ were appearing not only online but also in a range of assorted ‘big’ publications. 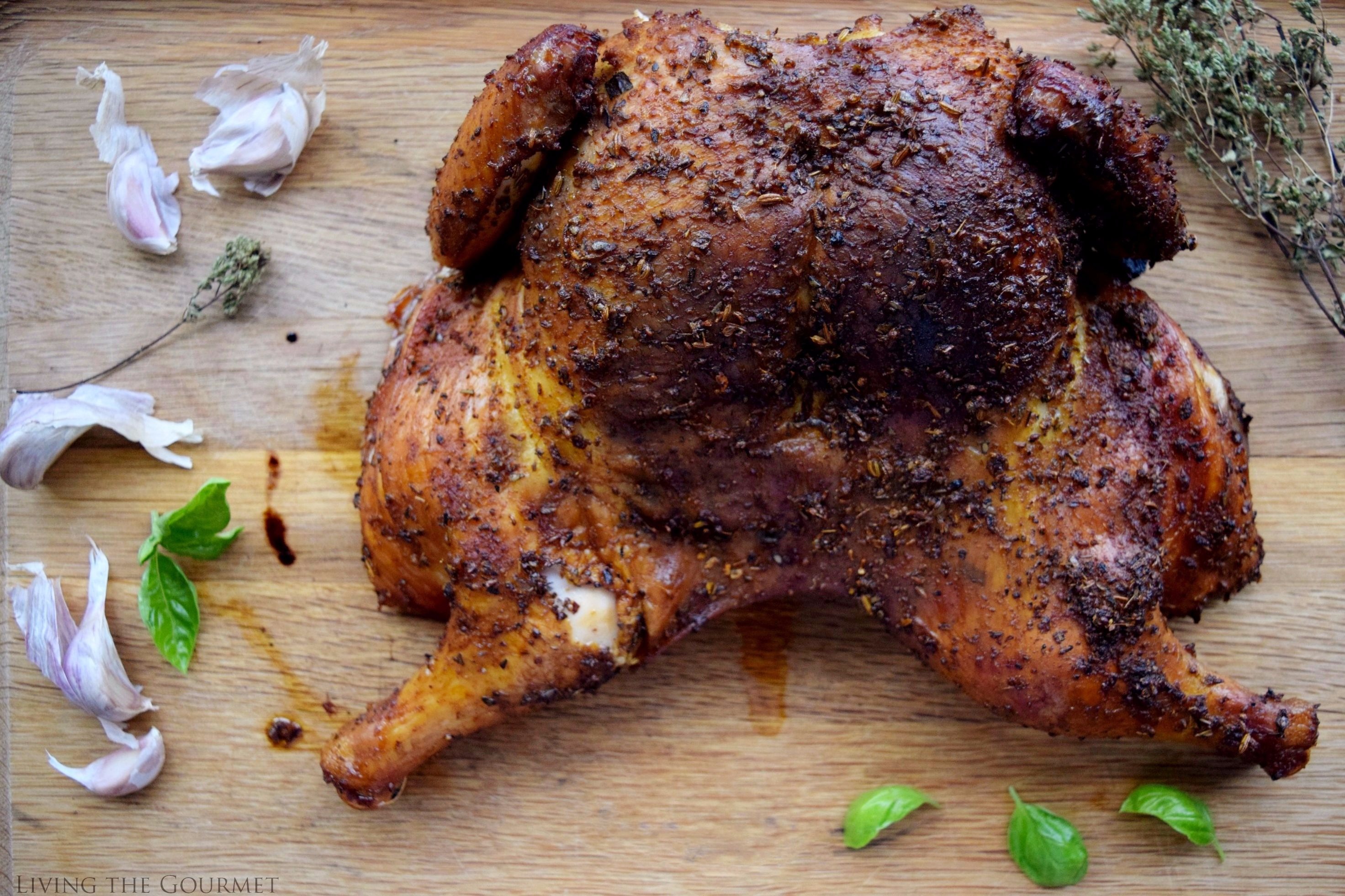 The idea of ‘spachcocking’ chicken, a type of ‘butterflying’ in which the bird’s backbone, and sometimes sternum, is removed, is hardly anything new. In fact, one might even consider the idea rather quaint, as it’s one of those ‘originals’ that appears in ‘old time’ cookbooks, with both Julia Child and James Beard giving their own takes on various butterflying techniques for not only birds but also other cuts of meat, with the earliest reference to the term that I could find dating back to the turn of the last century.

One of the big surprises with the current gout of spachcocking is that it more or less flies in the face of the perennial ‘simplicity craze.’ After all, playing kitchen-surgeon with your meat of choice is not something that we can pretend to make ‘easy.’ You need some cursory confidence with a knife and scissors, and both the time and patience to carry out the proceeding ‘procedure’ as prep work. 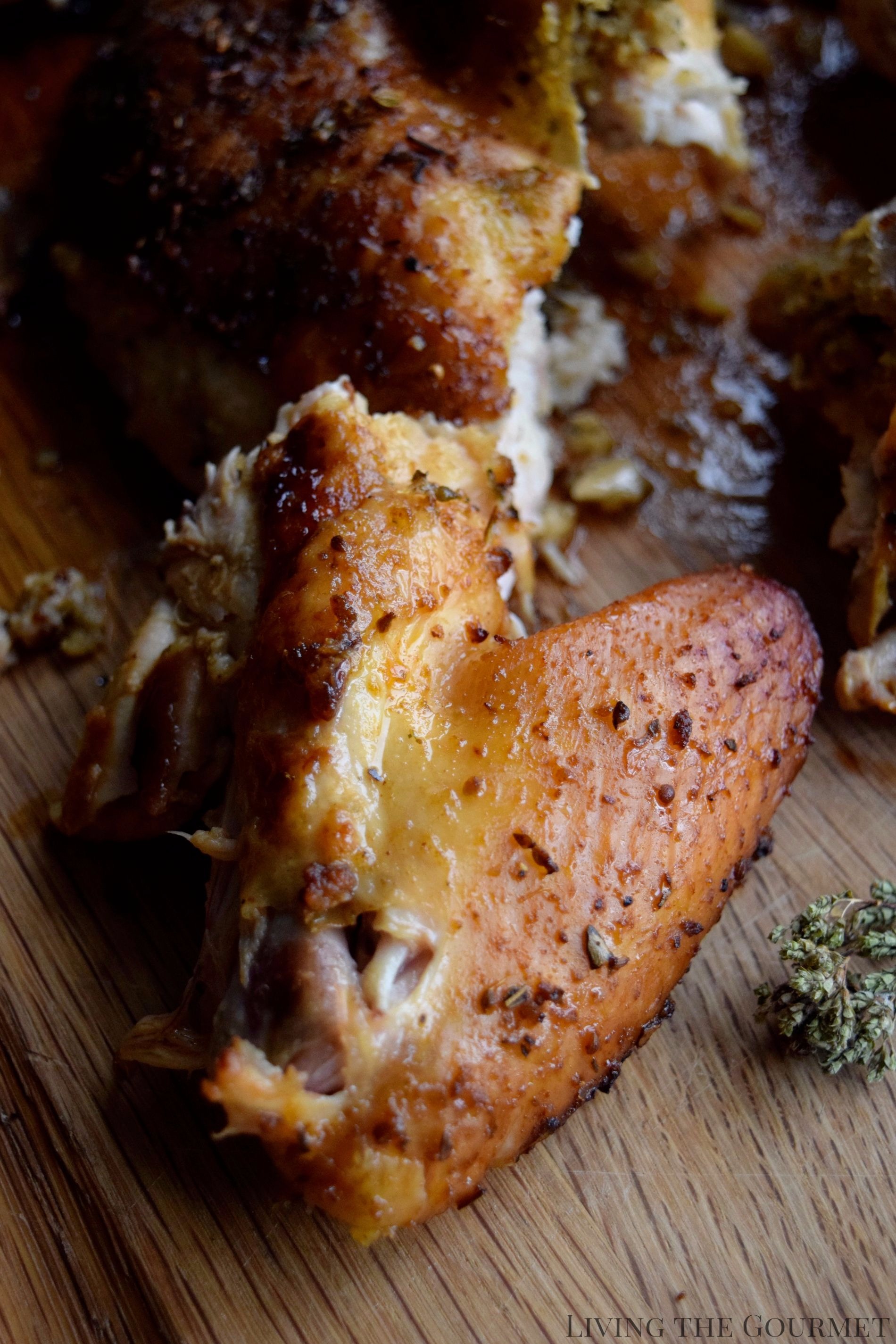 To start things off, for today’s recipe we begin with a roughly four to five-pound whole chicken…buying pre-cut chicken ‘parts’ would defeat the purpose. Now, using a sturdy scissor you’ll need to cut downward along either side of the backbone, using a similarly sturdy knife where necessary. Then remove the bone by pulling it up and out, while simultaneously pressing downward on the chicken to flatten the bird down as you remove the bone. You want to be especially careful here so as not to ‘tear’ the chicken while removing the bone. You can also take this opportunity to remove the sternum of the bird in a similar manner if you so desire for an even ‘flatter’ chicken.

Once that’s done, flatten the chicken out as shown below, and place the bird in a large baking pan, sturdy foil is fine for this, with about three tablespoons of olive oil and about four or five fresh basil leaves.

Next, prepare the rub for the chicken with some salt, pepper, coriander, oregano, fennel seeds, paprika and olive oil. Once you’ve combined all of the ingredients together, you’re going to need to gently massage the mixture onto the skin of the chicken. Prepare the stuffing with breadcrumbs, garlic, basil, romano cheese, lemon juice, and olive oil. Once that’s done, carefully separate the chicken’s skin from it’s meat, and using small handful, distribute the stuffing under the skin as evenly as possible. 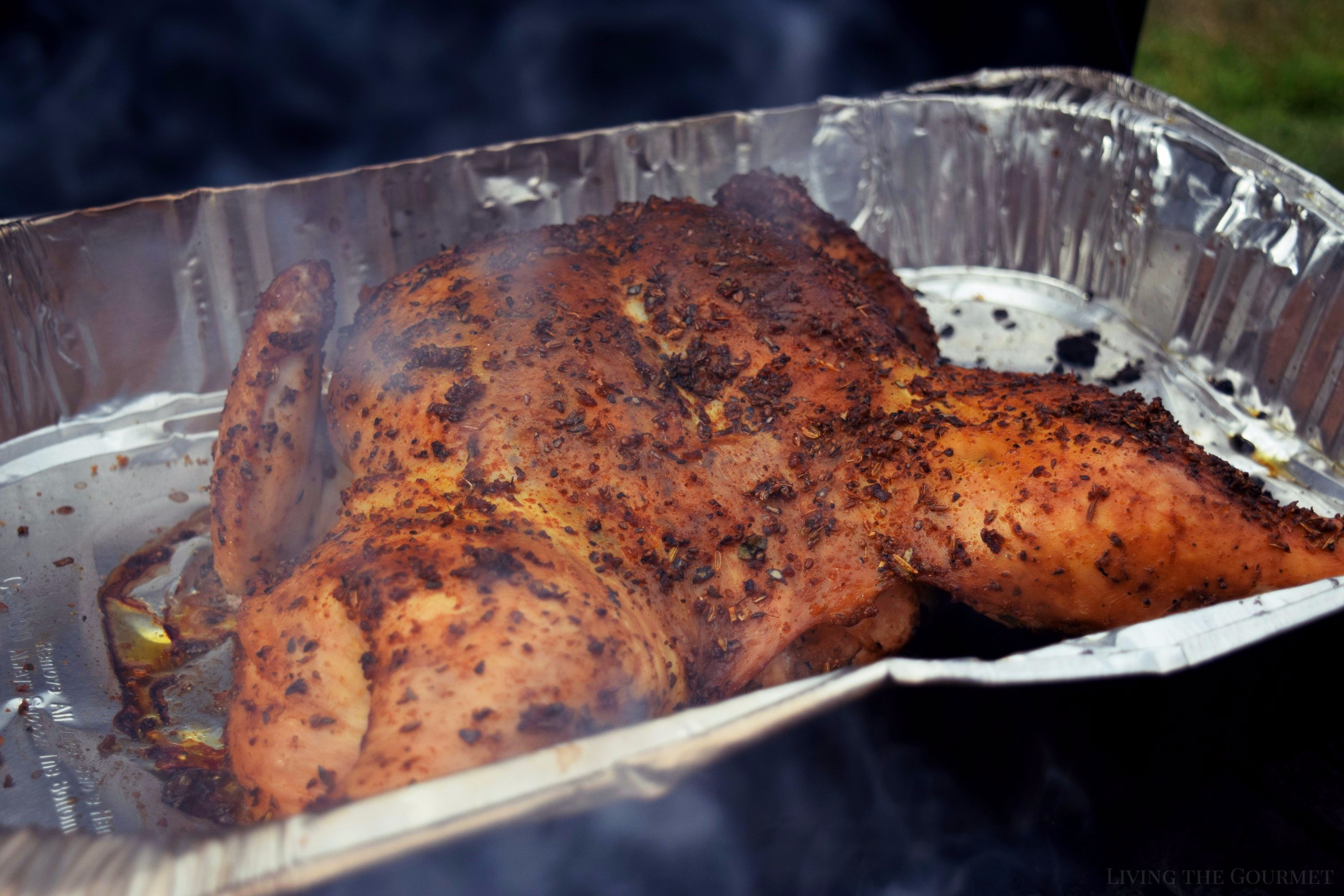 Now comes the easy part – barbecuing the bird. We’re going to do this low and slow, setting the foil pan directly over the grill, and then close the lid and open the vents. While the cook time will vary according to the size of the bird, you’re looking for the thickest part of the chicken to reach about 165 degrees Fahrenheit and the juices to run clear when sliced into.

Once the chicken has finished cooking, let it rest for about ten minutes before slicing and serving. And there you have it, barbecued spachcock chicken. 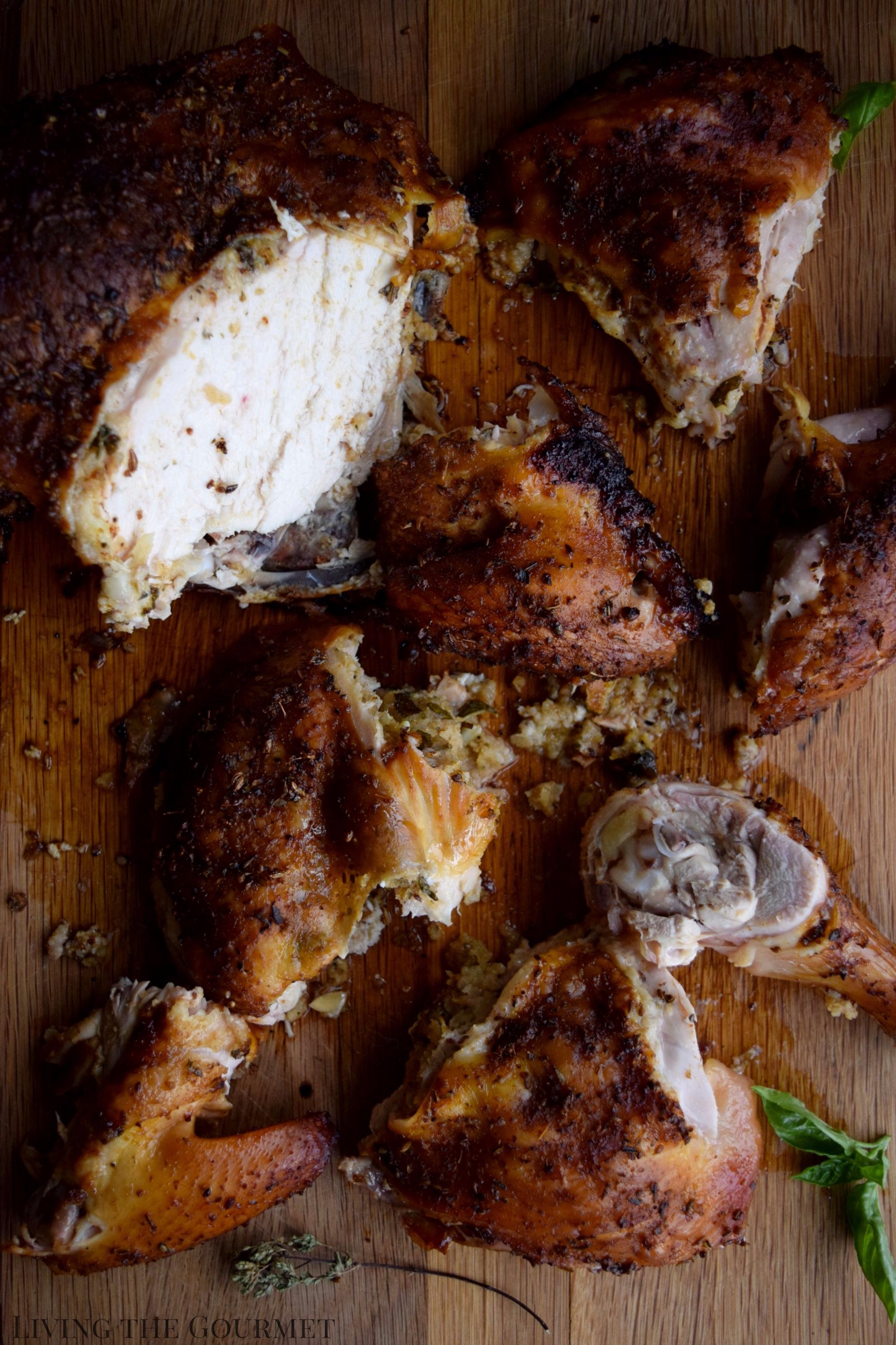 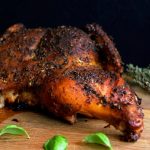 Rub for the Chicken: 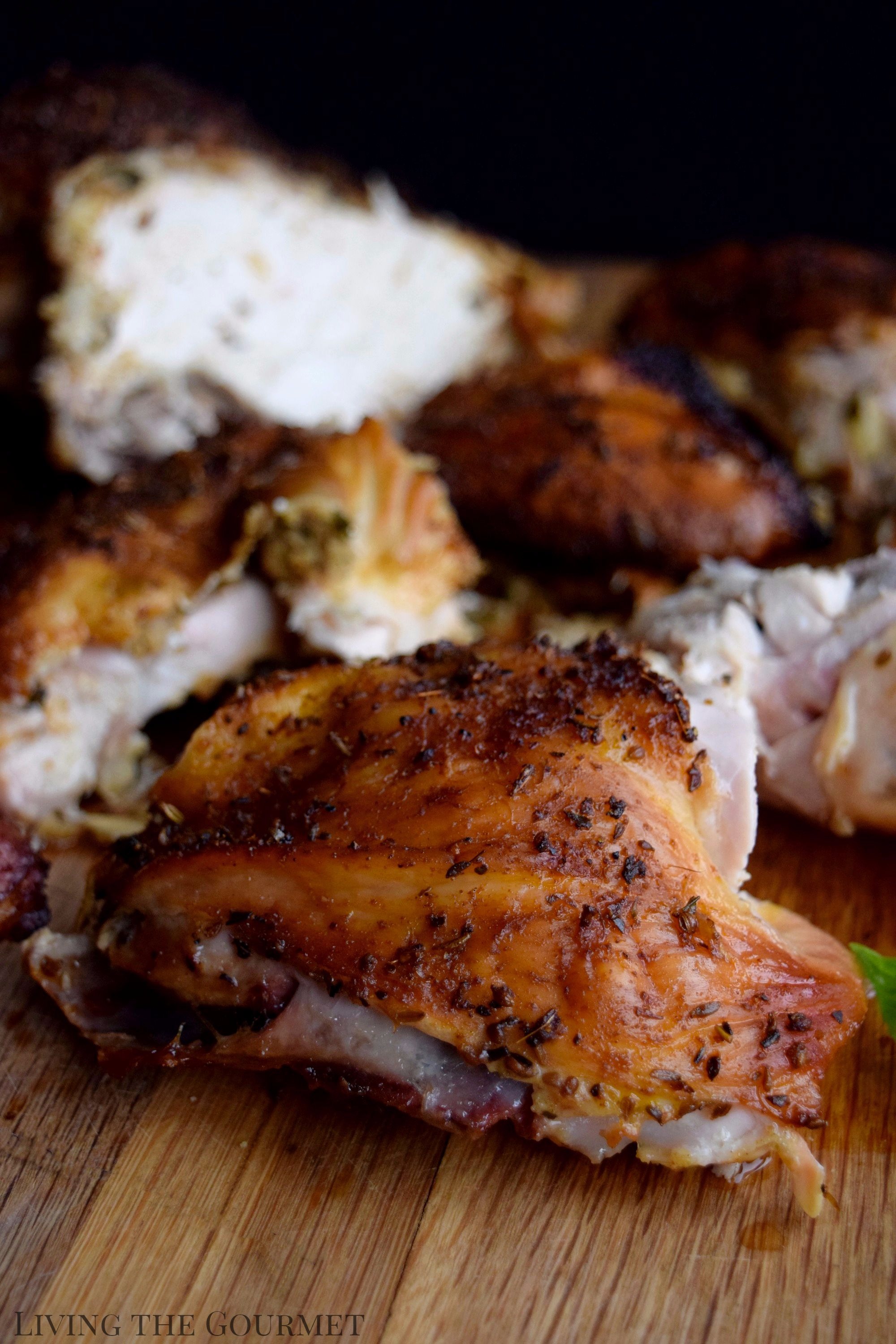