The flavors of the Old World Mediterranean get a modern twist with these elegant Eggplant Stacks! 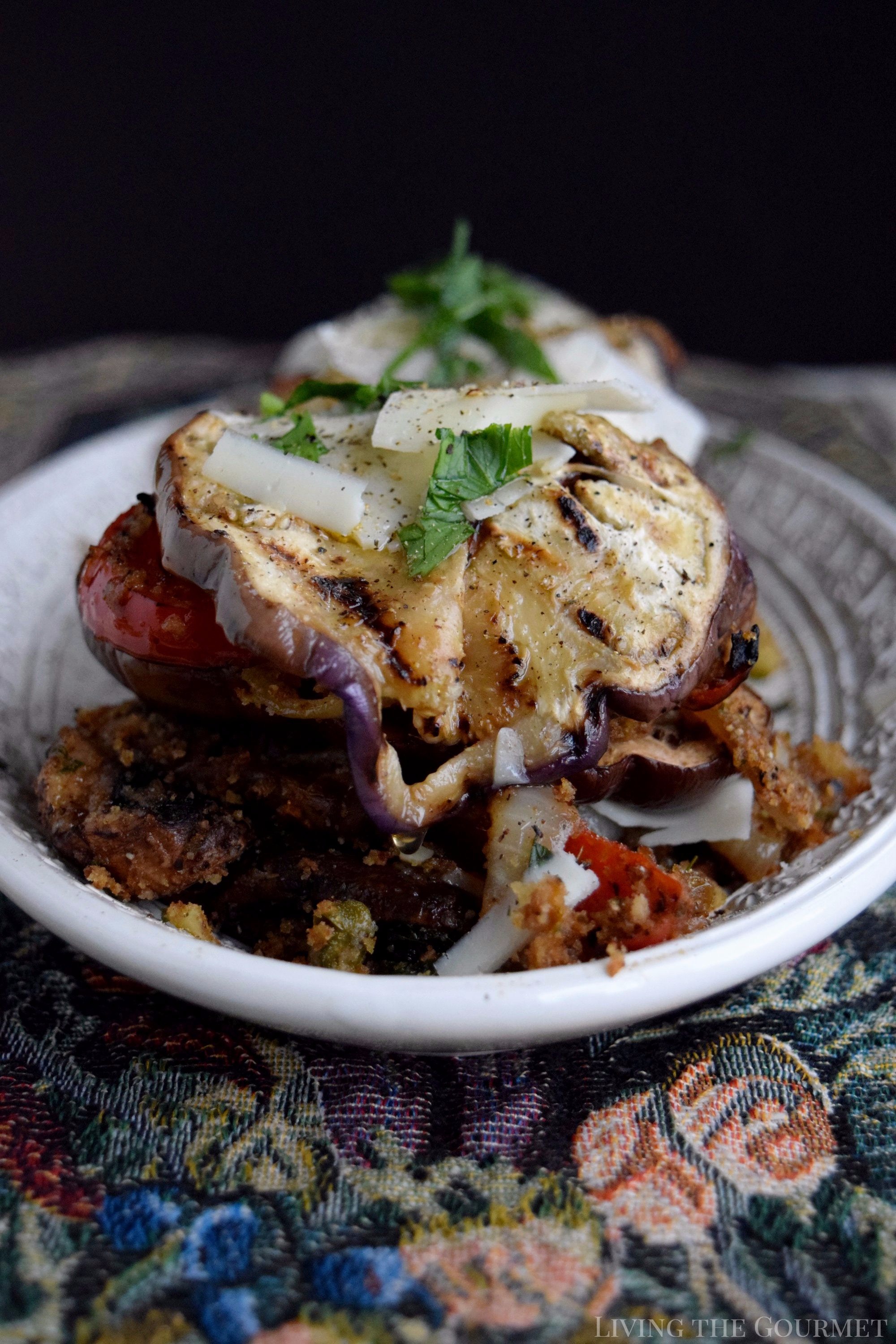 For millennia, mankind has lamented that there’s “nothing left to say.” In the fashion and entertainment industry, we’re all familiar with the maxim that “Everything is made new again.” In the classical world, the ancients themselves pined that “The thing that hath been, it is that which shall be; and that which is done is that which shall be done: for there is no new thing under the sun.”

In the world of cooking, let me give you a rather pertinent example of this.

Suppose I were to grill up some vegetables, mushrooms, and onions either in cast iron with freshly pressed olive oil, or over an open fire with various Mediterranean or Aegean seasonings, and then serve it to you with homemade bread or flatbreads, and topped it off with a salt-preserved cheese, what would you think of that? You would likely consider that to be a rather decent example of “Old World gourmet.” 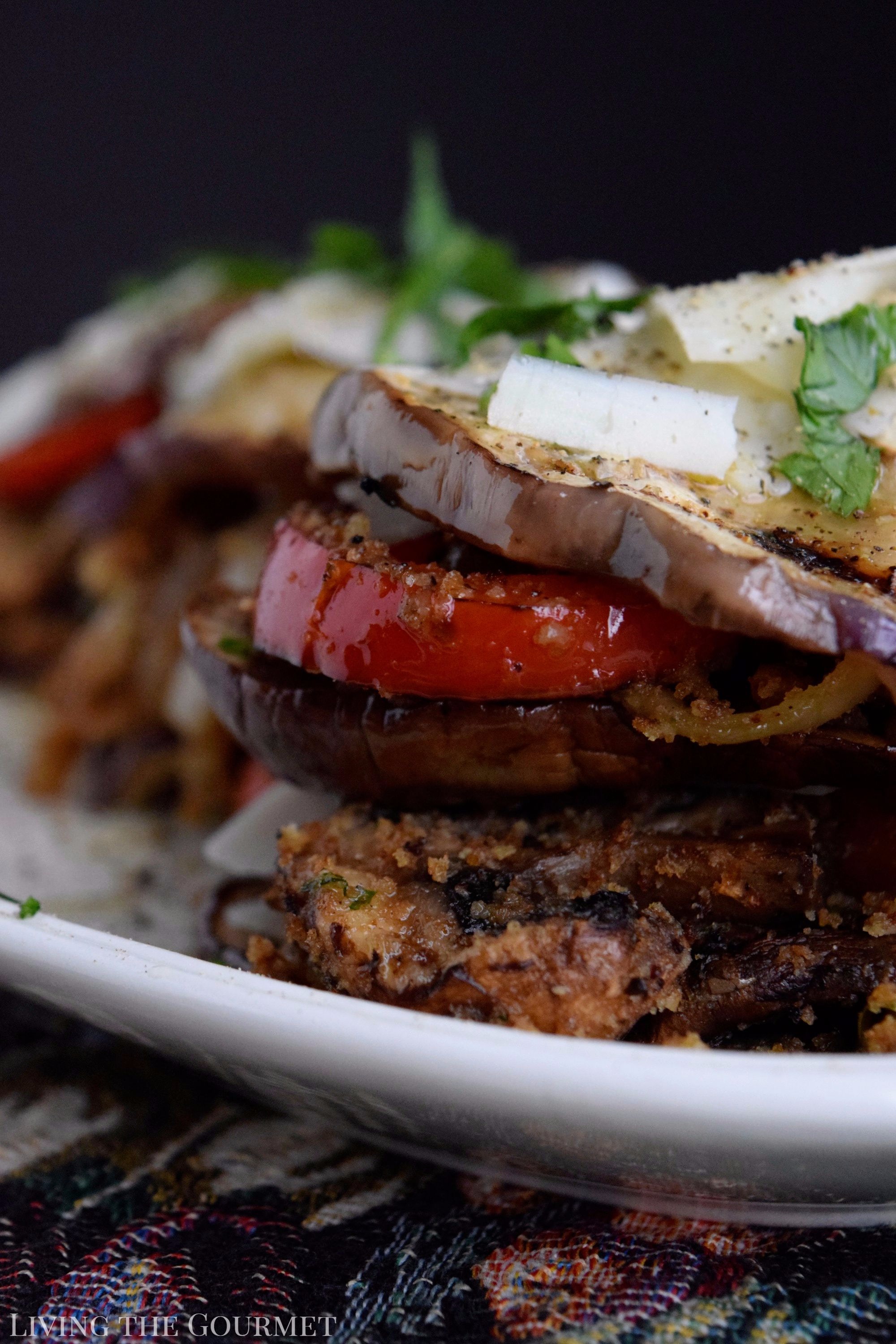 Now consider that the aforementioned ingredients, combined in various incarnations, were staples of the Byzantine Empire’s peasantry in Greece and Turkey.

You see, in the food industry, there’s something of a golden rule, that “If the peasants ate it once upon a time, or your grandparents considered it ‘easy cooking,’ you can serve it up with a fancy name, and charge any price you wish for it.”

I was reminded of this the other day after I prepared basically that the same recipe – albeit with a few ‘Living the Gourmet’ twists – Mediterranean Eggplant Stacks paired with Angel Hair Pasta. 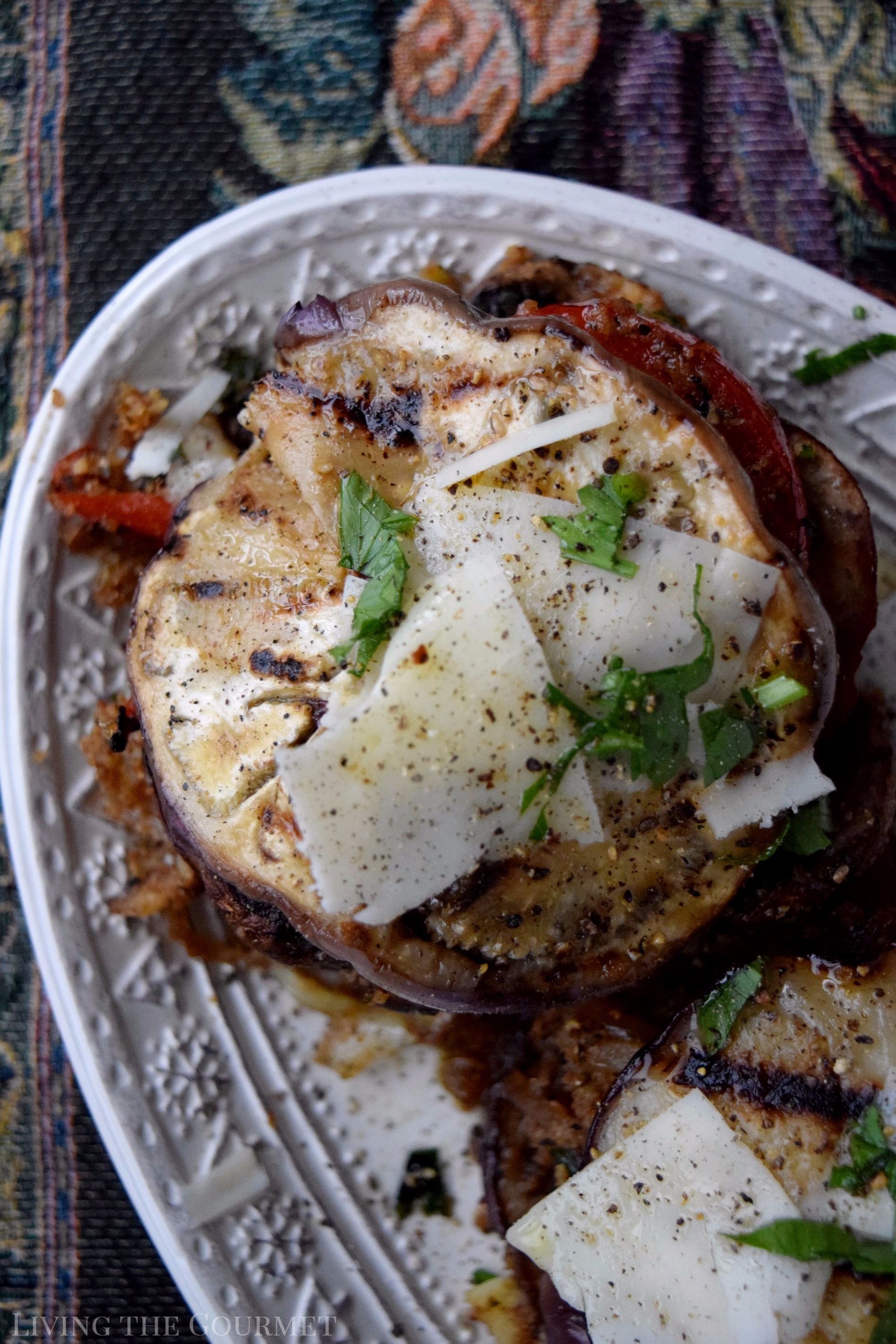 After that, heat a large cast iron frying with about two tablespoons of olive oil, and add the onions and bell pepper strips. You want the onions to reach a beautiful golden color before adding them to the same bowl into which you placed the mushrooms and the peppers a slight char. After that’s done, add a bit more olive oil to the cast iron frying pan, and add in a bit of chopped garlic, letting that roast until it becomes nice and fragrant, after which you’ll want to add in the breadcrumbs listed below, along with capers, parsley, raisins, and pitted olives.

Once the breadcrumbs have become golden, add the mixture into the bowl with the onions and mushrooms, and season further with salt, pepper, oregano and red pepper, and then toss gently.

After that’s finished, it’s time for the fun part – assembling the eggplant stacks. Start off with a serving platter, and place down one of the eggplant rounds, top it with the mushroom mixture, followed by shaved provolone, and then another eggplant slice. Repeat this process a few times before finishing with more provolone, chopped parsley, and a drizzle of the honey mixture outlined below. 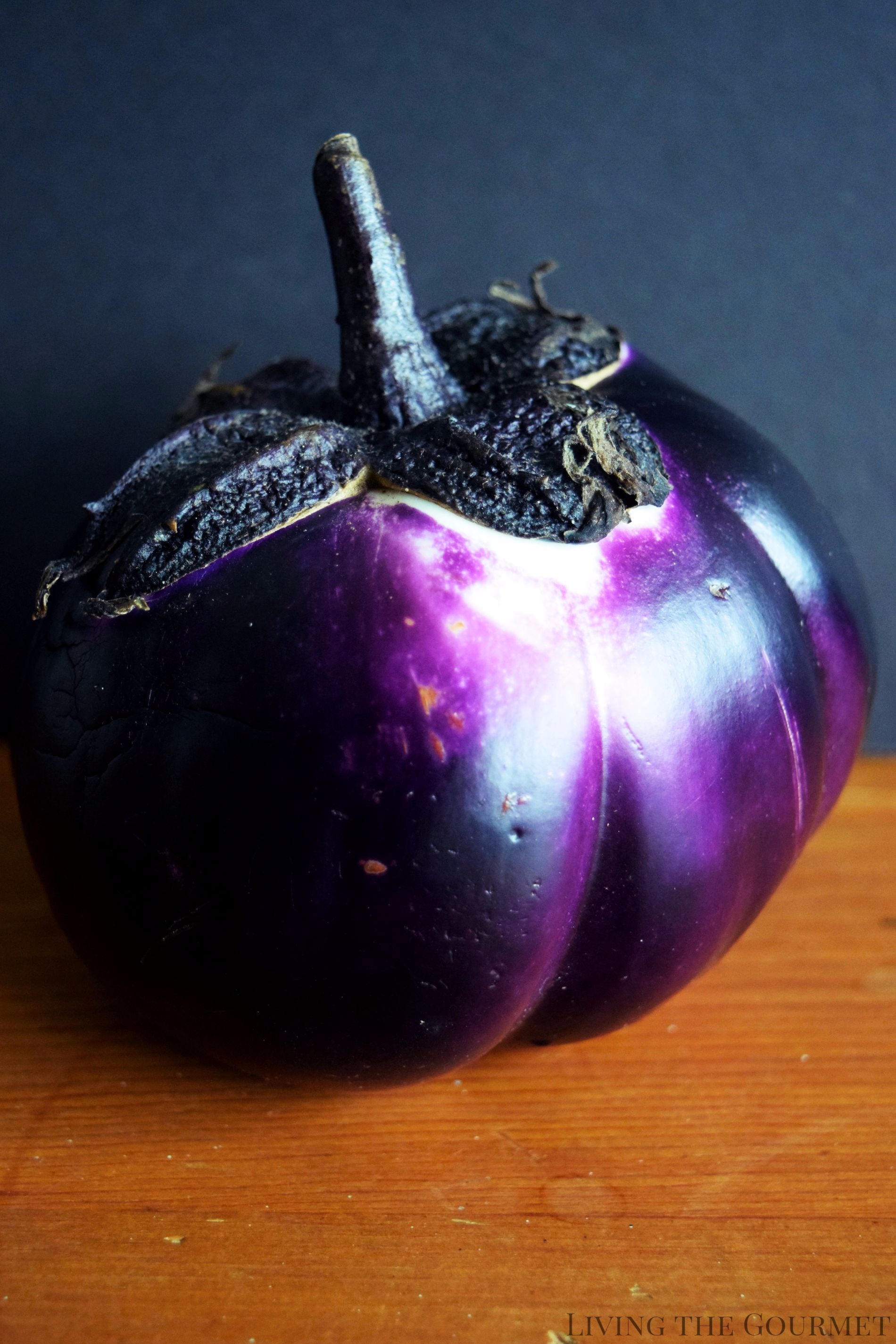 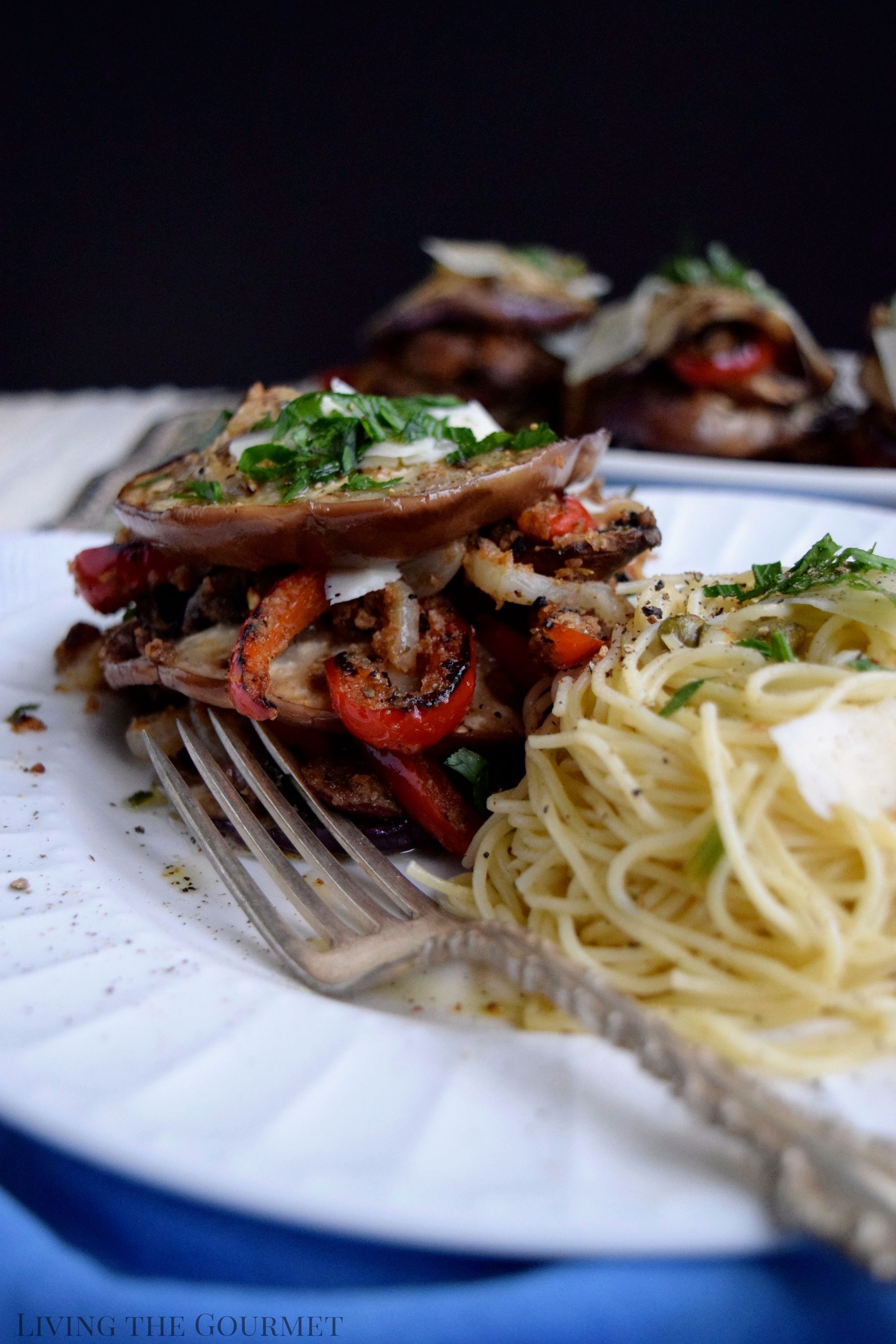 Once that’s done you can prepare your desired pasta, and you’re ready to serve a classic Old World style Mediterranean ‘peasant dish’ with a delicious modern twist.