These traditional soft and sweet little buns are easier to make than you think and the best part is- they are gluten free! This is a sponsored post on behalf of Bob’s Red Mill however all opinions expressed are my own. 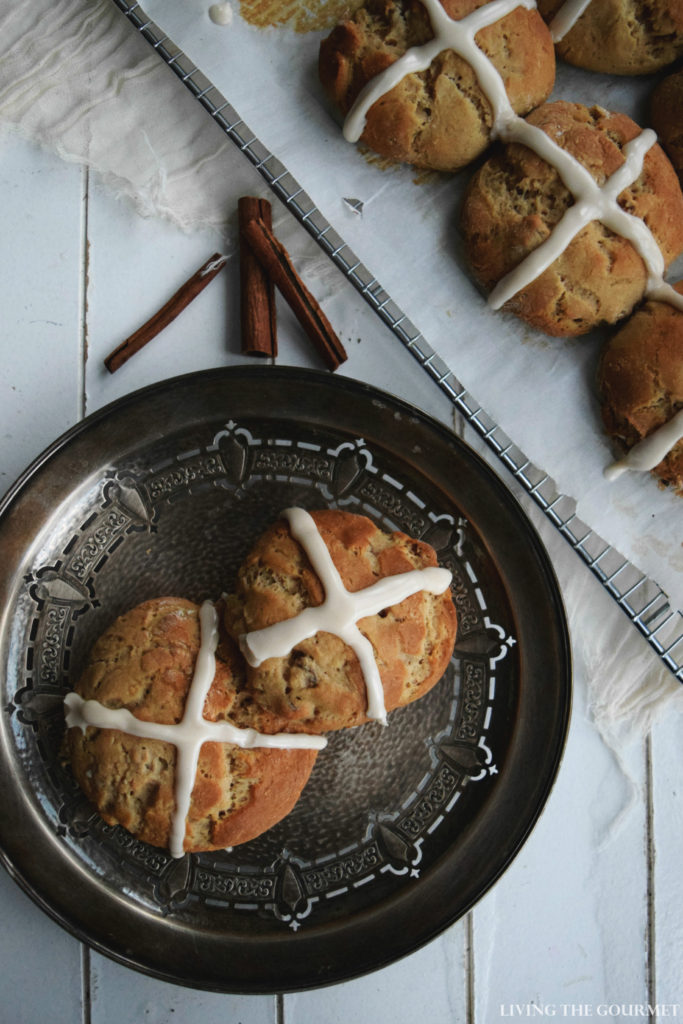 At some point, we recognize when an object, custom, or ritual crosses the line into becoming ‘iconic.’ Perhaps after a few years, or a generation, a certain recipe prepared for a certain occasion stops being either merely ‘beloved’ or ‘traditional,’ and starts to wholly embody the occasion.

Decorated trees at Christmas, for example, or Mirror balls being dropped from skyscrapers on New Year’s Eve. Similarly, along with bunnies and molded chocolate, Hot Cross Buns have come to symbolize the Easter Season – in particular the end of Lent. While not as ‘deliberately nonsensical’ as dragging a fern into the living room to string with electric lights (fire hazards be damned), or as faux-audacious as dropping crystal balls from skyscrapers, Hot Cross Buns nevertheless found themselves outlawed by the government of Queen Elizabeth I, to be sold and consumed solely at Christmas and Good Friday.

A tad odd, I think, considering they’re a quaint thing, really. Humble of ingredients and flavor, almost purposefully simple, and thoroughly antique as if reaching back to a bygone era. I can’t help imagining “Black Market Bakers” selling these in the alleys between pubs, or in graveyards past midnight to Hot Cross Bun-craving Londoners in desperate need of their spice cake fix. 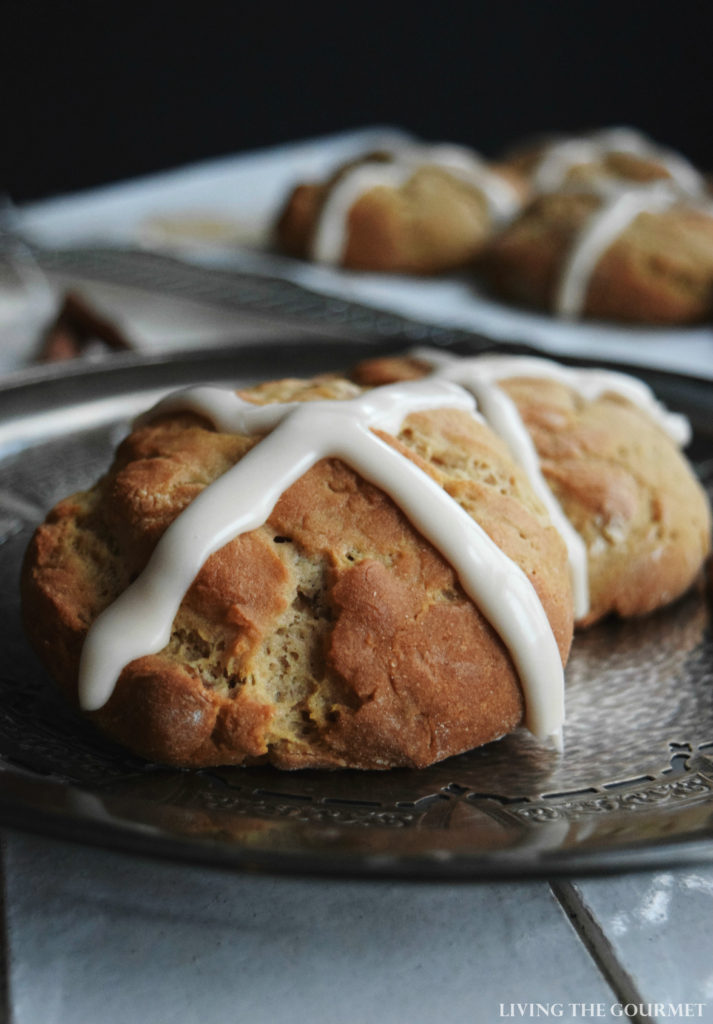 The precise origin of these once fugitive buns is, like most such traditions, largely lost to time. Some attempt to link the eating of hot cross buns to ancient Greek and Roman festival food, where small spiced cakes were common fare for the attendees. However, I can’t really imagine how Hellenic era festival food would vanish for several millennia only to reemerge in Elizabethan England. Others link the buns to St. Albans Abbey in the thirteenth or fourteenth century, with monks piously marking their food with iconographic…frosting?

Growing up, I must admit that we bought rather than baked our Hot Cross Buns, and that they were almost exclusively a morning treat, or eaten midday with black coffee.

However, today, no Easter arrangement in my home would complete without these now coveted cakes. There is but a single caveat to the Hot Cross Buns in my home – and that is they need to be gluten free. 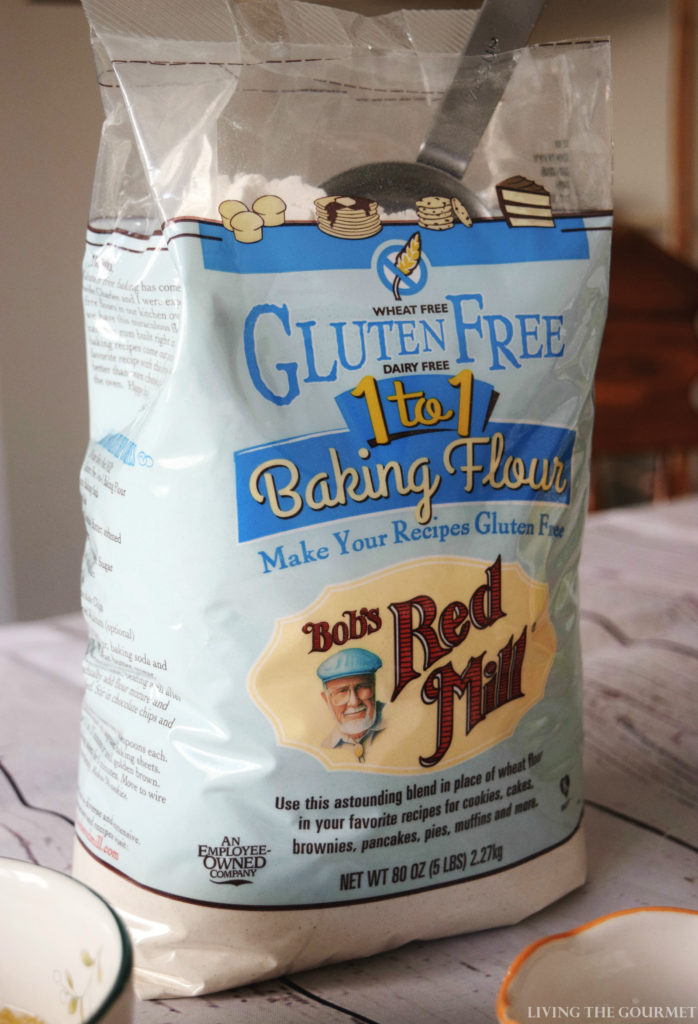 You see, my niece suffers from a gluten allergy, and I wouldn’t even think of preparing a batch of these without her being able to enjoy them.

For precisely that purpose, I use Bob’s Red Mill Gluten Free 1-to-1 Baking Flour. I use Bob’s Red Mill for a couple reasons, first being that it’s perfectly formulated for baking, assuring a delicious taste and perfect texture. This means that no additional specialization or customized recipes are necessary when using this flour.

That being said, we start things off by proofing our yeast as directed below. While that sets, soak some raisins in hot water until their nice and plump.

Don’t be a wise guy and ask me “Wow, way to complicate things, why not just use grapes? Aren’t grapes literally ‘already plump raisins?’”

No, no grapes are not ‘already plump raisins.’

Up next, mix together the Bob’s Red Mill Gluten Free 1-to-1 Baking Flour with the rest of the dry ingredients. After that, gently heat about a cup of milk, and whisk in an egg and vegetable oil. Then add in the dry ingredients, the proofed yeast, plumped raisins (or currants), and stir until thoroughly combined. 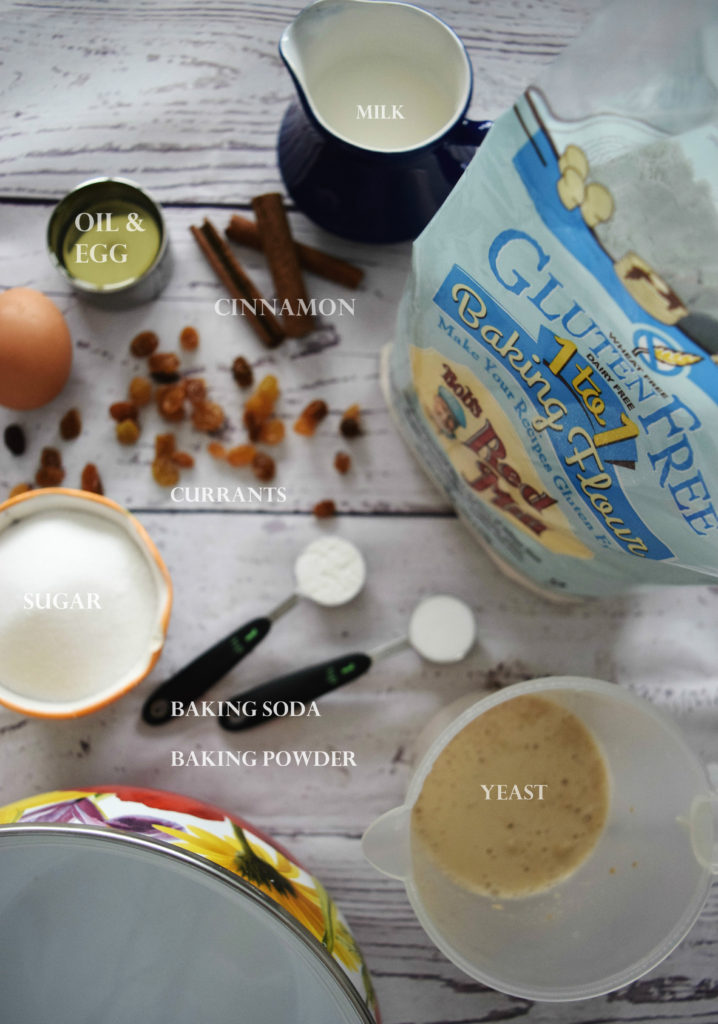 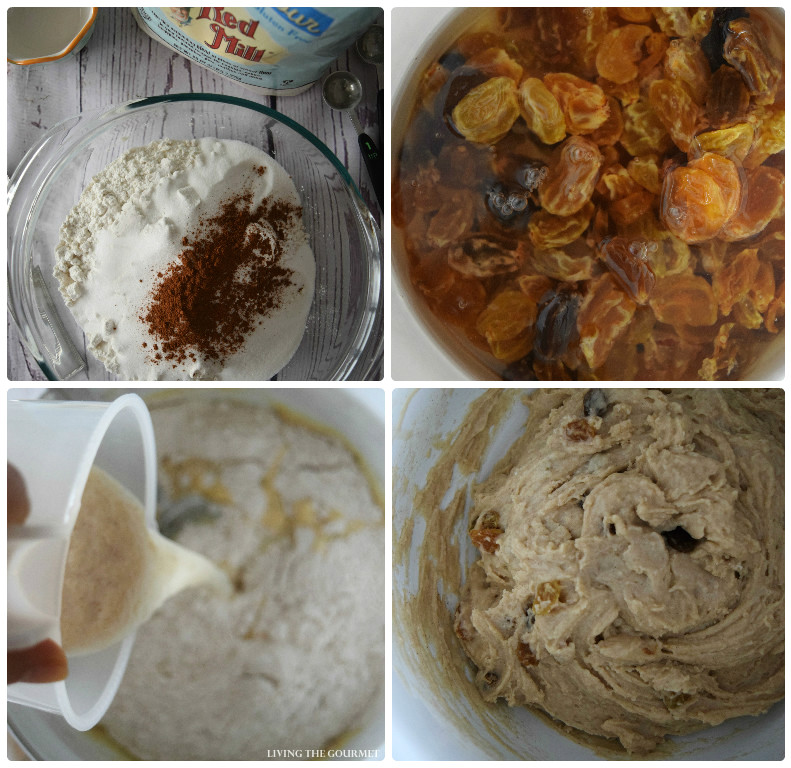 If you’ve done this all correctly the dough should be wet and sticky. Now, cover the dough with a towel, and place in a warm dark place to rise. It should just about double in size within an hour.

Once the dough has risen, work the dough into a ball as described below, and then cut into eight equal parts, and then set them aside to rise a second time. No kneading necessary. Again, they should about double in size.

After that, bake them at 400 degrees Fahrenheit for about twelve to fifteen minutes, and you’re done. 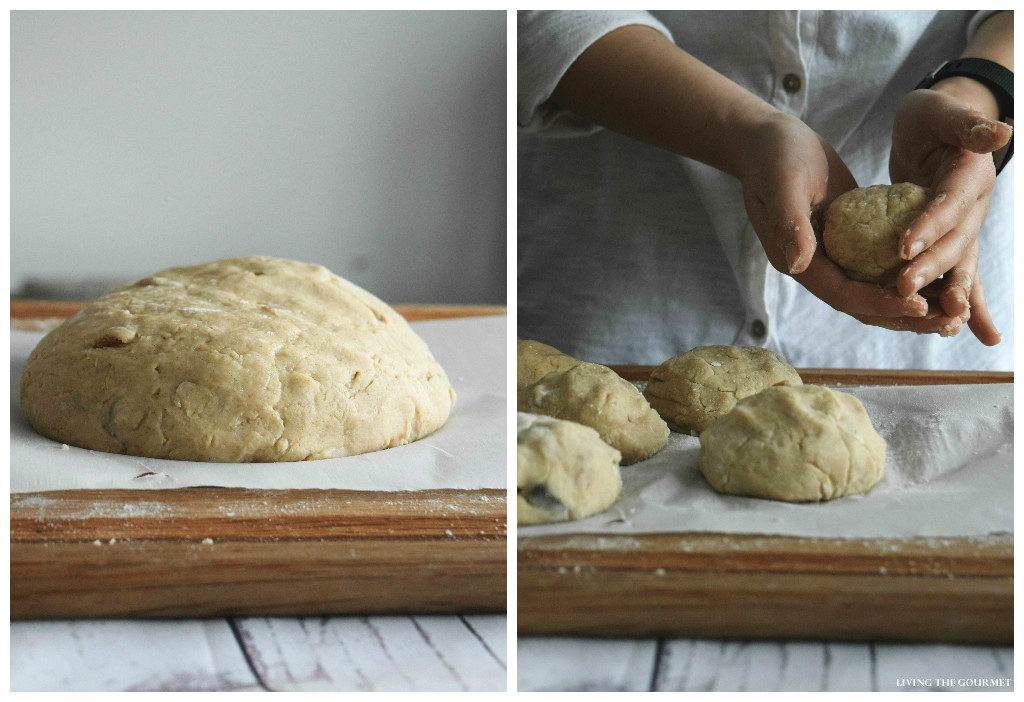 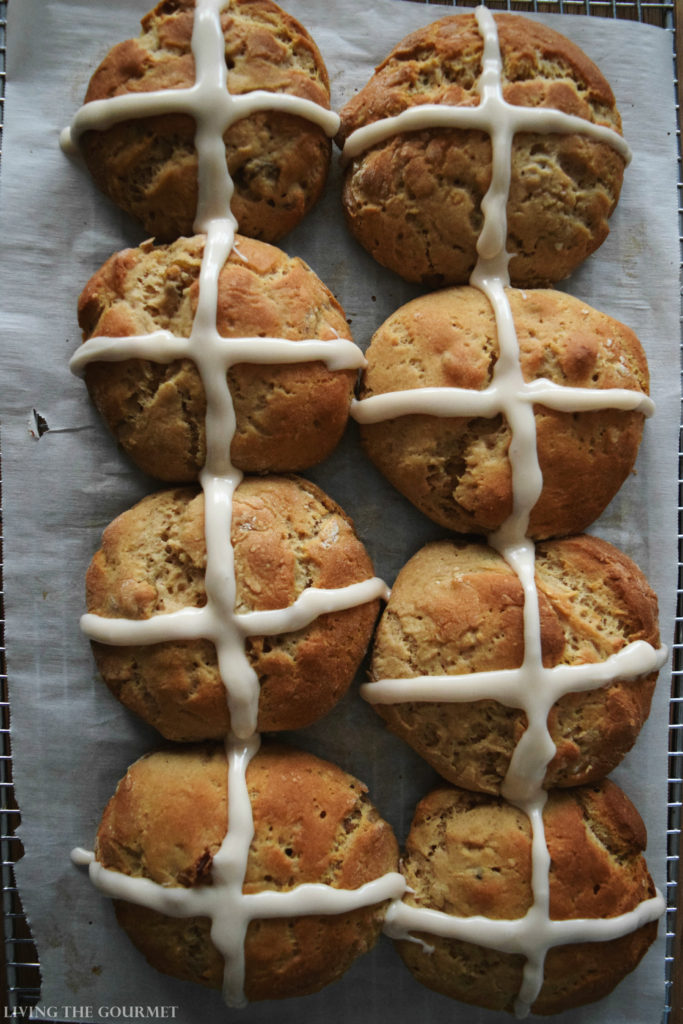 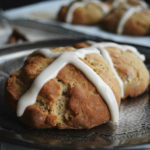 Prep Time does not include Inactive Prep Time 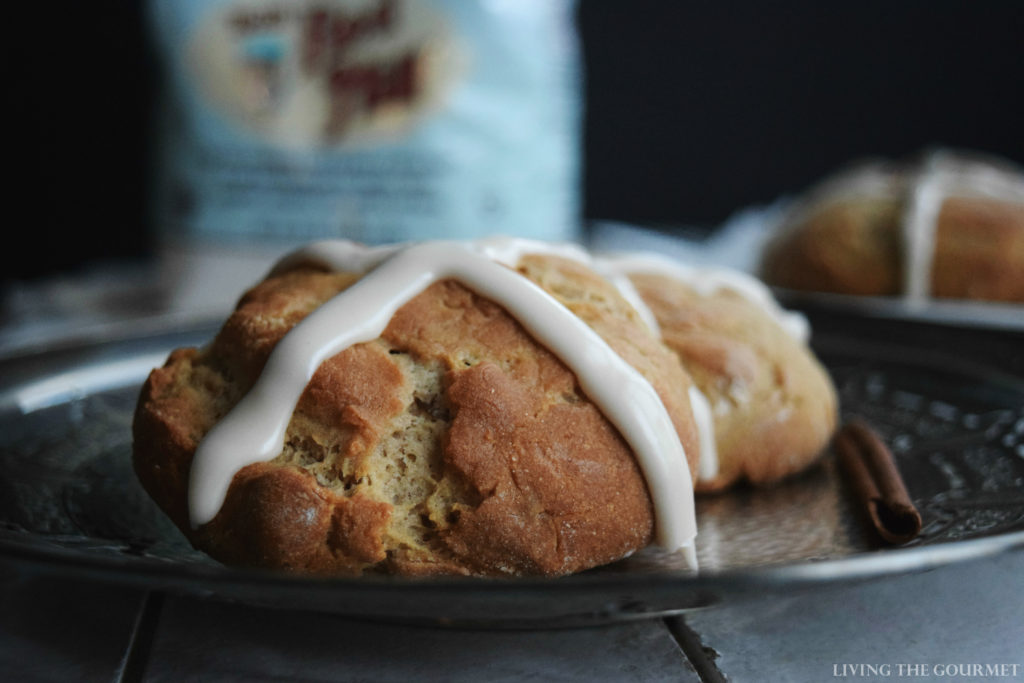 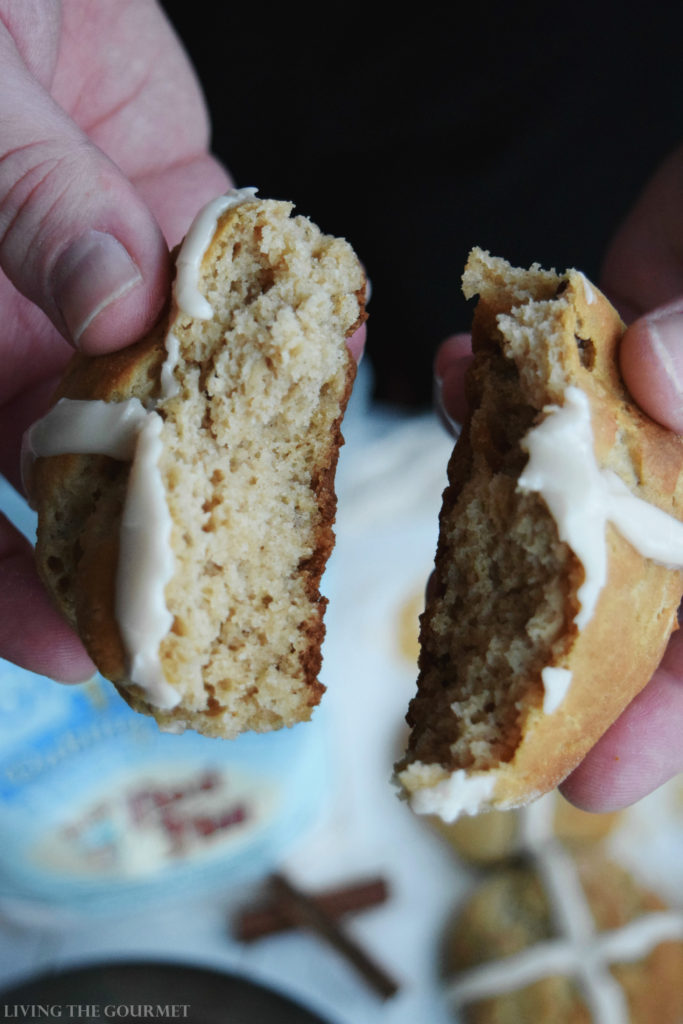 What are some of your favorite Easter treats? We would love to hear from you.