Since early this year, I had been planning to do something special on or around Mothers Day, either for the holiday itself, or as a sort of ‘close of spring’ event. I wasn’t quite sure how I would go about it, but I knew I wanted to put together a truly special seasonal spread.

As fate would have it, the representatives of one of the highest regarded producers of beef in the US, Snake River Farms, contacted me last month in regards to precisely that subject – Mothers Day. As it turns out, they wanted to know if I would be interested in sampling their Kobe beef and Kurobuta ham, and then sharing my thoughts.

Needless to say, I agreed. 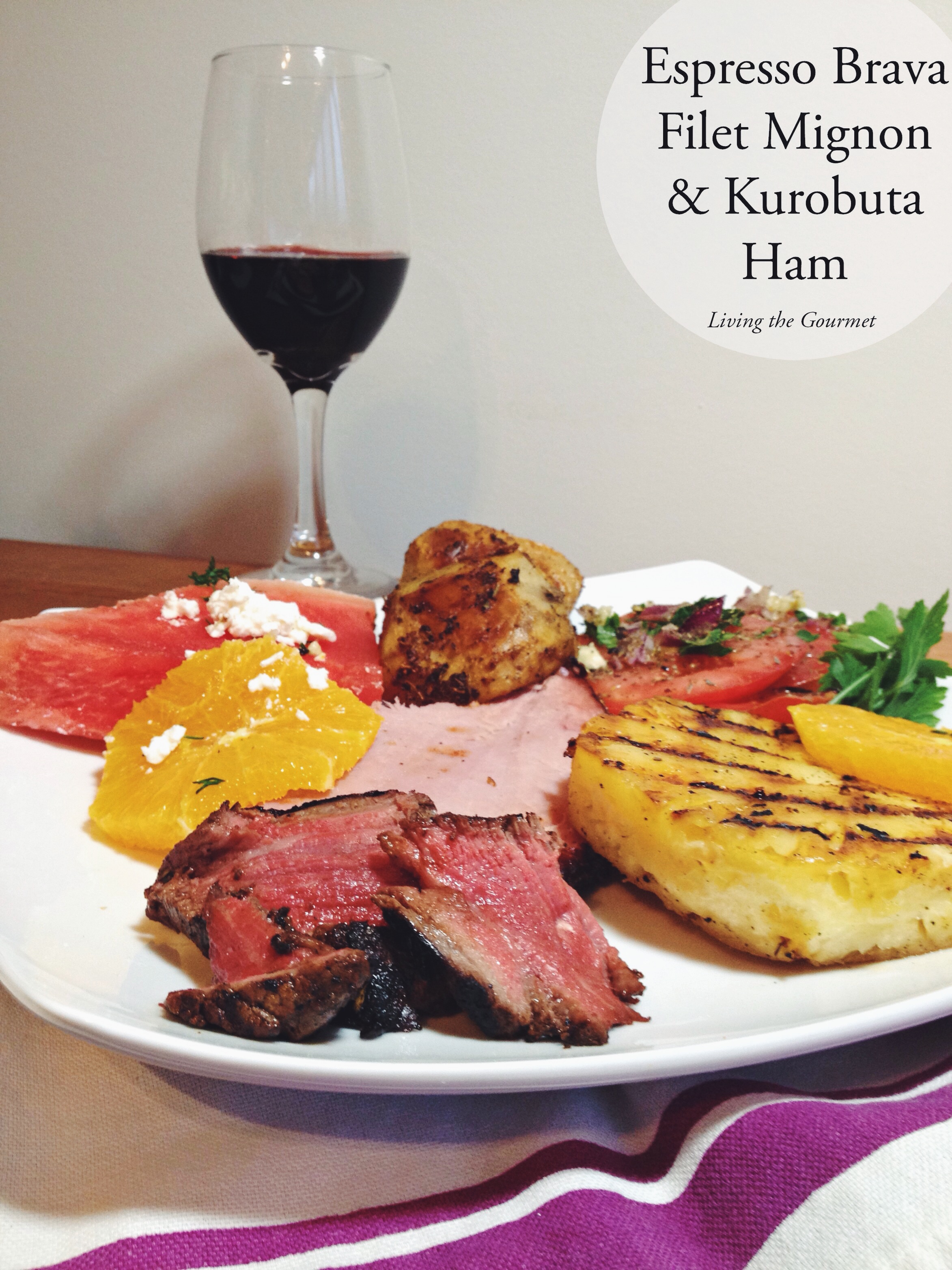 The meats arrived in a crisp and unblemished box, inside of which I found a neatly sealed envelope resting on top of a small foam cooler, bearing the ensign of Snake River Farms. Curious, I opened the envelope, and was greeted by a full-color primer on the suggested preparation methods for both the beef and the ham.

Given my own emphasis on presentation, it goes without saying that I was instantly pleased.

Opening the cooler, I examined each of the steaks through their clear vacuum seals, and have to admit that I was quite surprised at how well marbled each piece was. Thus far, the Kobe was already living up to its prodigious reputation, and I hadn’t even opened it yet. The moment of truth, however, was still a few hours away. 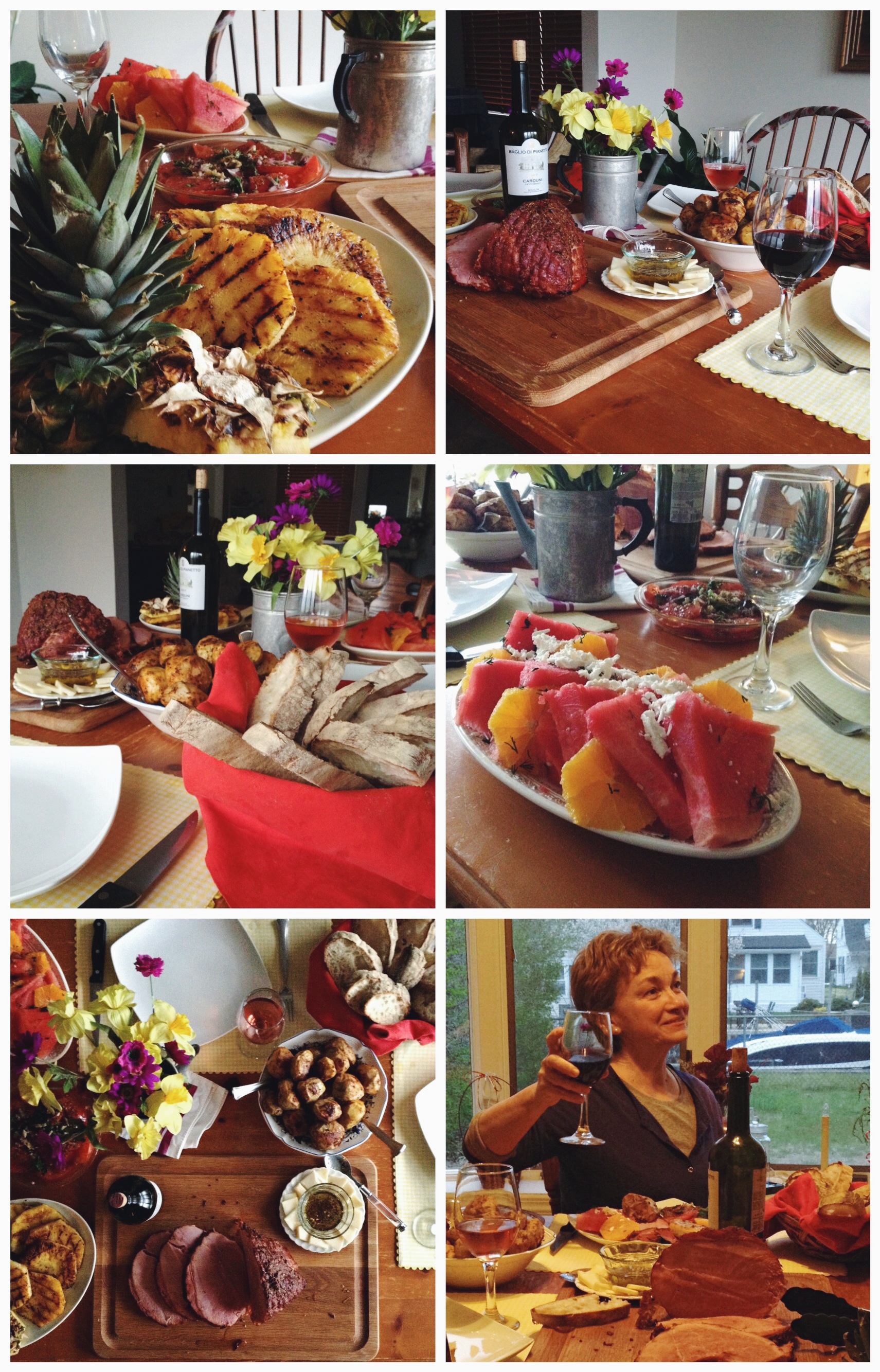 With the meat delivered, it was time to tend to my own preparation and presentation. However, I wanted to do something a little different. While exquisite tablescapes are the very essence of a well plated meal, they are often only food for the eye, framing rather than accompanying what is on the plate.

This time, I wanted to essentially make the tablescape a part of the meal itself, I wanted to prepare and plate side dishes or accompaniments that would in and of themselves create the atmosphere, and that taken together would make for a classic spring or summer presentation. 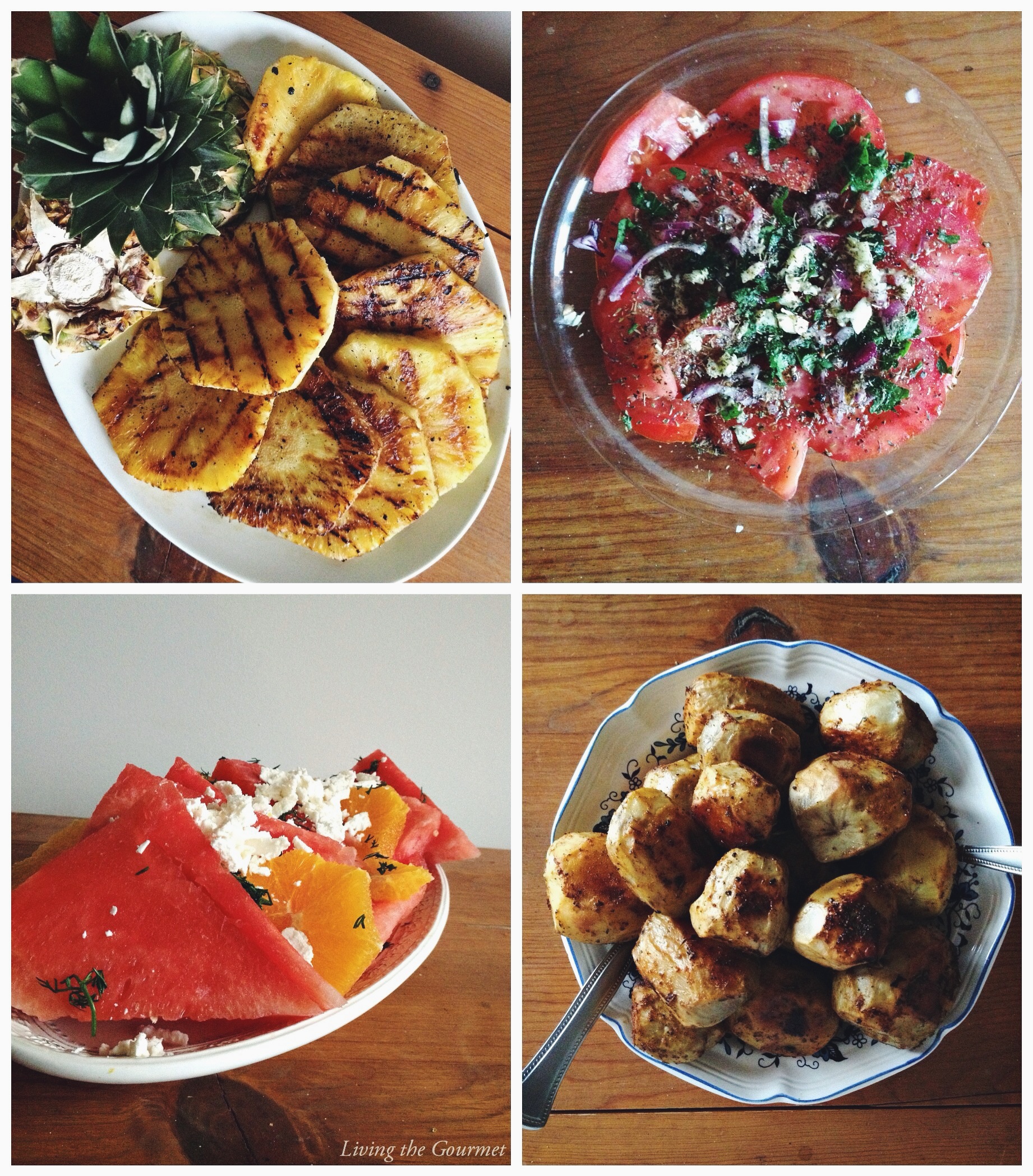 To achieve this, I first prepared a platter of grilled pineapple with olive oil and freshly ground black pepper. This was accompanied by side of feta and dill enhanced watermelon and oranges. Aside from adding color, these are season appropriate fruits, and would later help to balance out the main course with fruity acidic and fresh notes.

After this, I set out a basket of fresh ciabatta bread, complimented by platter of sliced tomatoes prepared with extra virgin olive oil, fresh garlic, oregano, sea salt, and fresh Italian parsley. A small platter of Asiago cheese with spice infused olive oil added a second layer of complexity.

Arranged together on the table, they made for a festive and colorful combination.

As for the meat itself, I decided to put a spin on the Fusion Espresso Brava seasonings that the steaks came with, and added orange marmalade, paprika, garlic powder, and dried oregano. This lent the meat a slightly sweet dimension, but at the same time imbued it with rustic Mediterranean notes, allowing it to harmonize all the more perfectly with the tomato and olive oil spreads. I then grilled the steaks stovetop on the griddle, charring perfect grill lines into either side of both. However, given the quality of the meat, I decided to cook them rarer than I usually prefer. 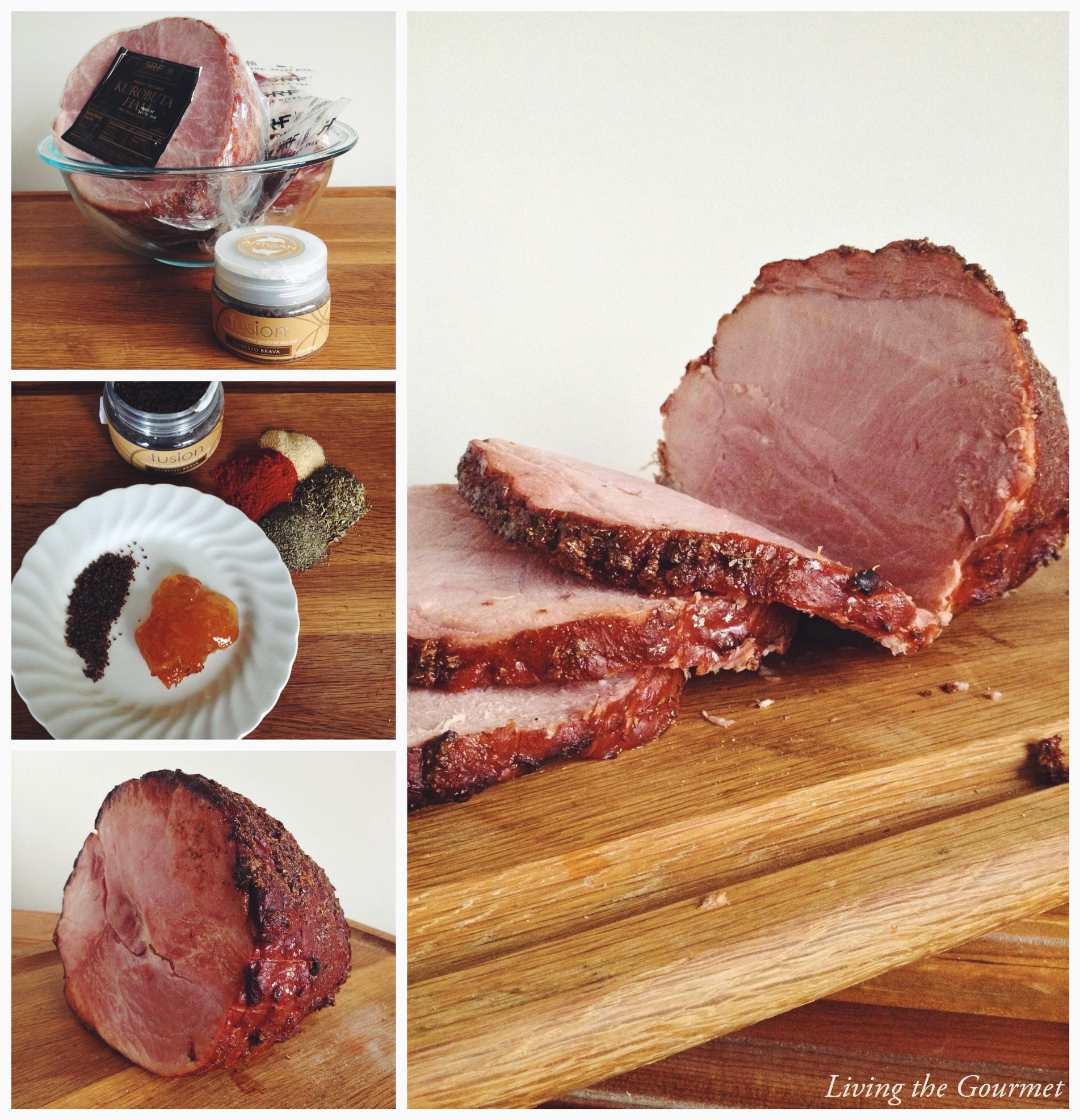 The steaks featured a very smooth texture, boasting a rich red color in the outer layers, which melded into a deep, almost wine red complexion towards the center. Moist and pliable in the mouth, the Kobe was easy on the palette, lacking the overwhelming and generally unpleasant ‘grittiness’ of lesser cuts.

I will admit that I came to the Kurobuta uncertain of what to expect, as while as I had heard of Kurobuta ham before, I had never had the pleasure of trying it. I seasoned the ham the same way I did he steaks, and then cooked it as prescribed. The ham carried a very fresh, notably ‘clean’ taste, with the flavor of its curing and outer seasonings featuring prominently on the aftertaste, lingering briefly in the mouth. On a side note, the ham went excellently with the grilled pineapple, with the warm acidity of the counterbalancing the natural hardiness of the meat.

With both the steaks and the ham forming the centerpiece of my setting, I couldn’t have been more pleased with how this Mothers Day dinner turned out. As a result, I can wholeheartedly recommend Snake River Farms Kobe beef and Kurobuta ham to my readers as the perfect Mother’s Day gift. 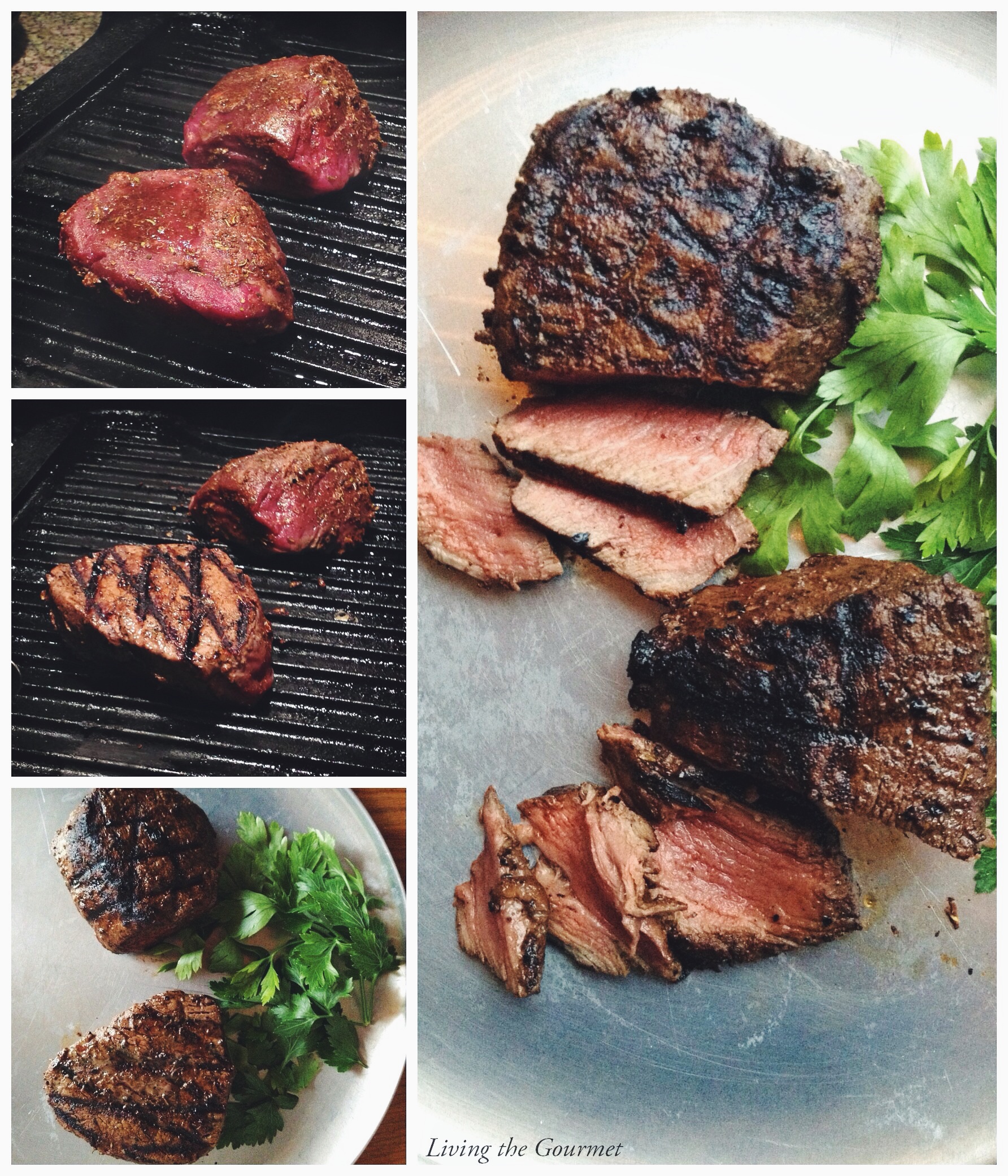 Rub for the Ham and Filet Mignon:

For the Kurobuta Ham:

For the Filet Mignon: 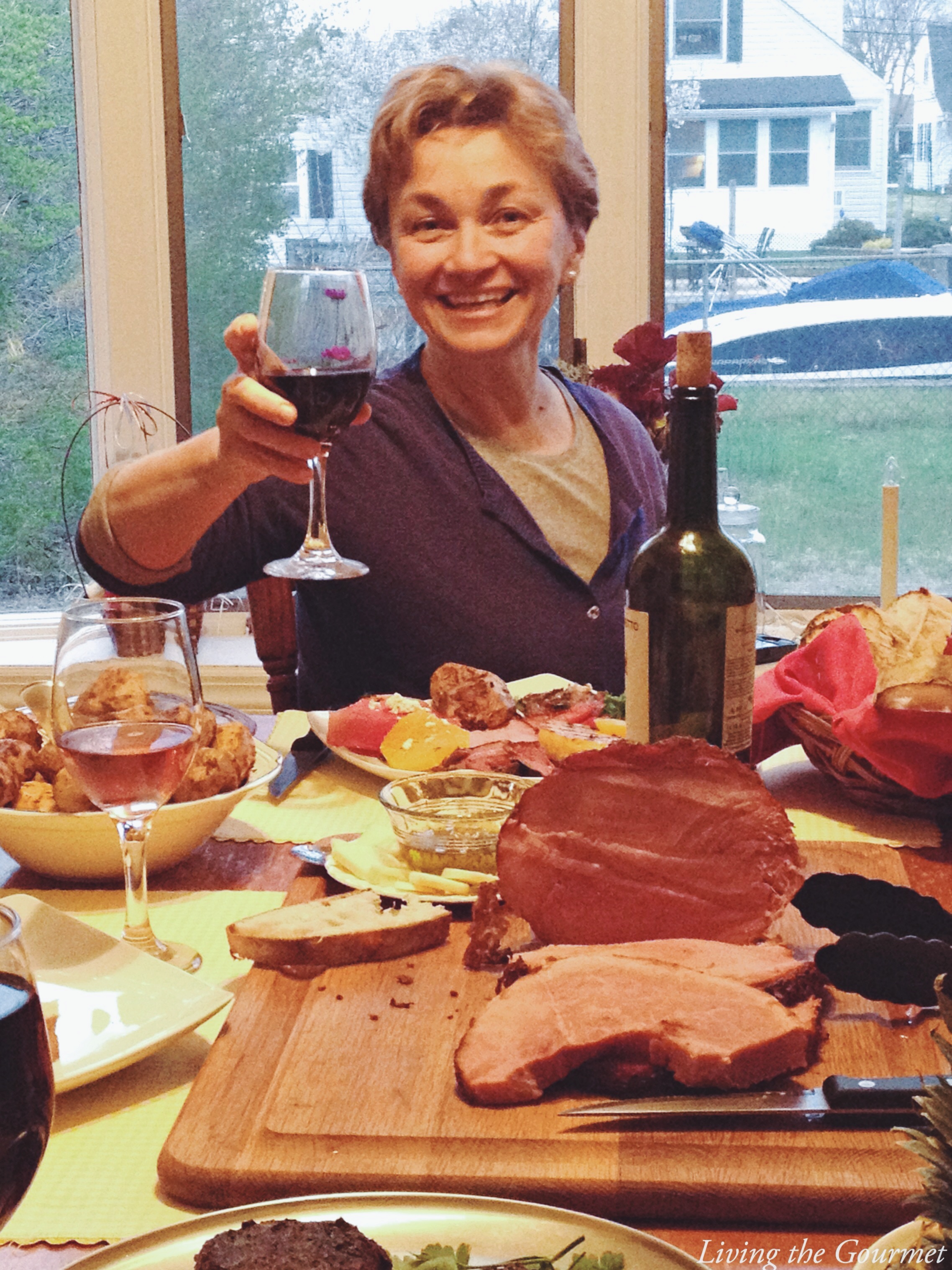 Special Offer: Send your mom (or yourself!) one of these Mother’s Day gifts and you’ll get free shipping by using the code: LOVEMOM. Click here for Mother’s Day Gifts.

This is a sponsored conversation written by me on behalf of Snake River Farms/Double R Ranch. The opinions and text are all mine.