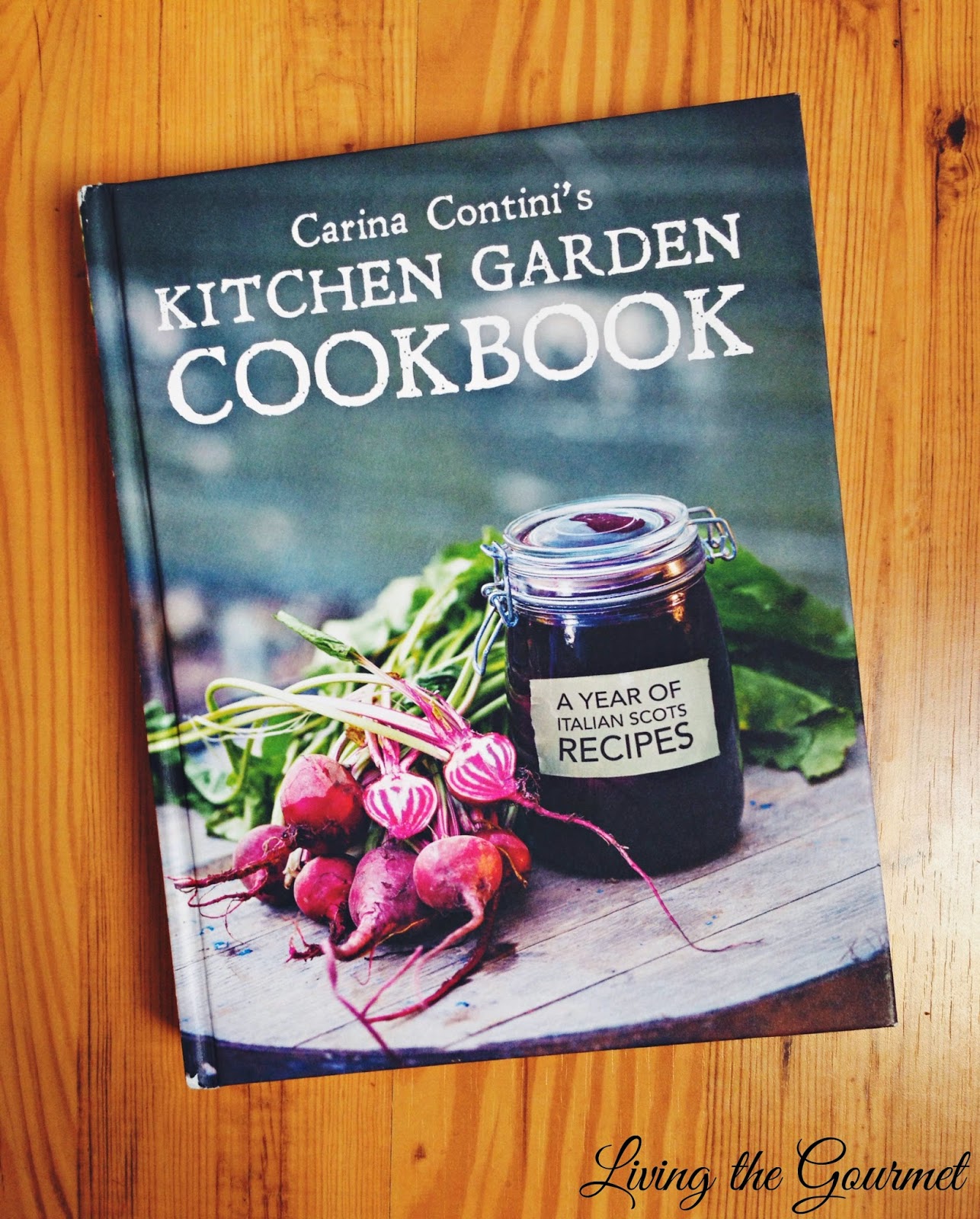 Living the Gourmet is pleased to present Carina Contini’s Kitchen Garden Cookbook, a masterful journey through her unique take on fusing Italian and Scottish cuisine.
While checking all the boxes on putting her culinary prowess on full display, Kitchen Garden Cookbook is also a deeply personal work, delving into her family heritage and life-story to frame her cooking, and give context to where and how she arrived at her unique fusion of two seemingly polar-opposite cuisines.  For example, the book begins with a literal ‘cast of characters’ in an overview of her family, framing them as actors on the stage of her life.  While I was uncertain of both the necessity and execution of this introduction, I came to not only understand but also to enjoy it, as once the reader begins delving into the book it becomes a clear necessity for the context of her cuisine, allowing the reader a much deeper appreciation for what is on offer through the month-titled chapters. 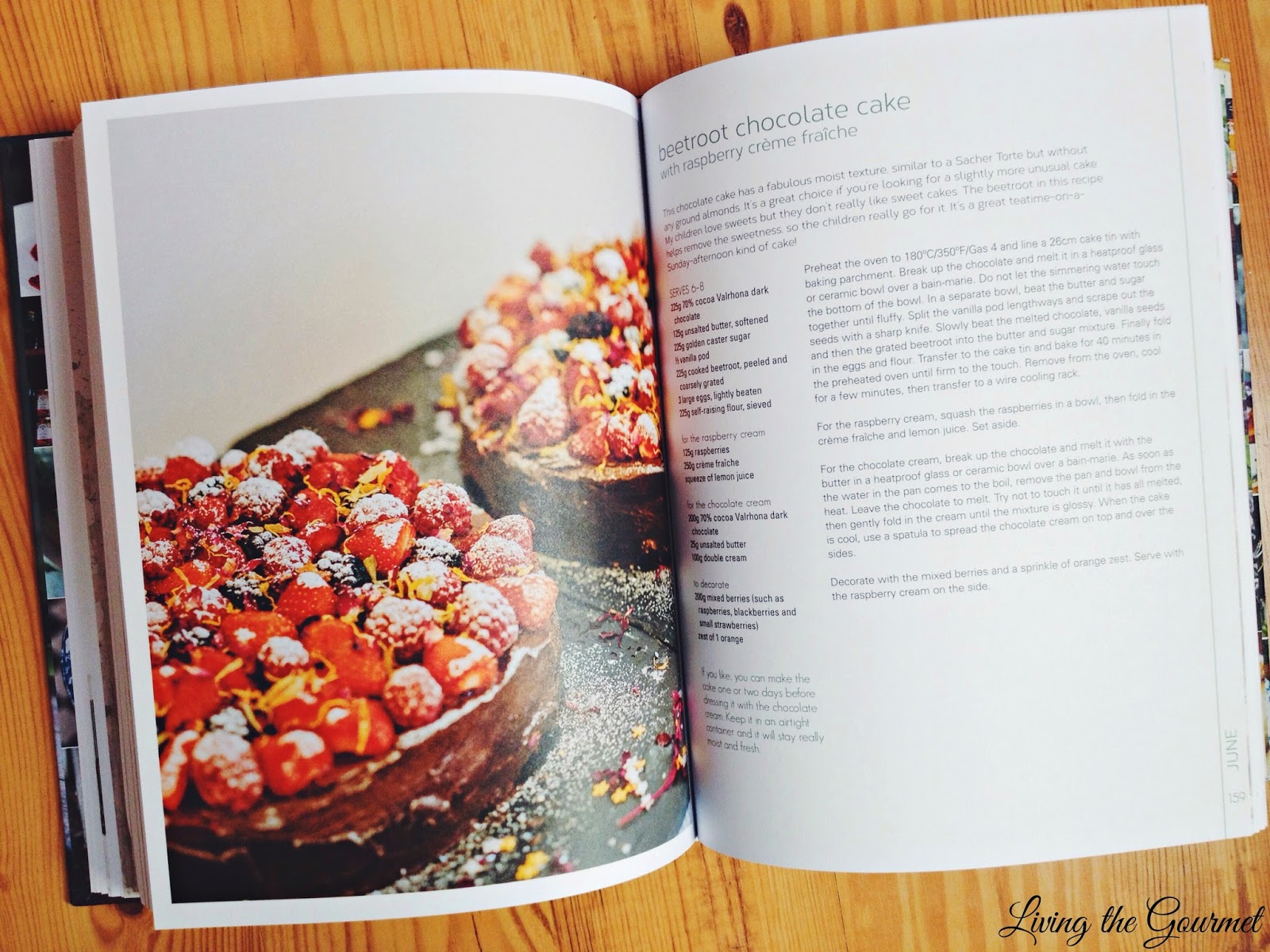 The ‘meat’ of the book opens in good form, with the author giving a brief, two page overview of cooking basics and essentials, touching on items such olive oil, rapeseeds, freezer etiquette, and vinegars.  The author also makes mention of using a mortar and pestle, something I was instantly intrigued by as this is a superb but vastly underused and misunderstood kitchen item – albeit its use is making a slight uptick thanks primarily to fusion cuisine.
From that point, the book becomes a combination of seasonal chronicles and accompanying seasonal recipes, with each month receiving its own chapter, and featuring recipes that one can assemble based on the produce in season for that month. 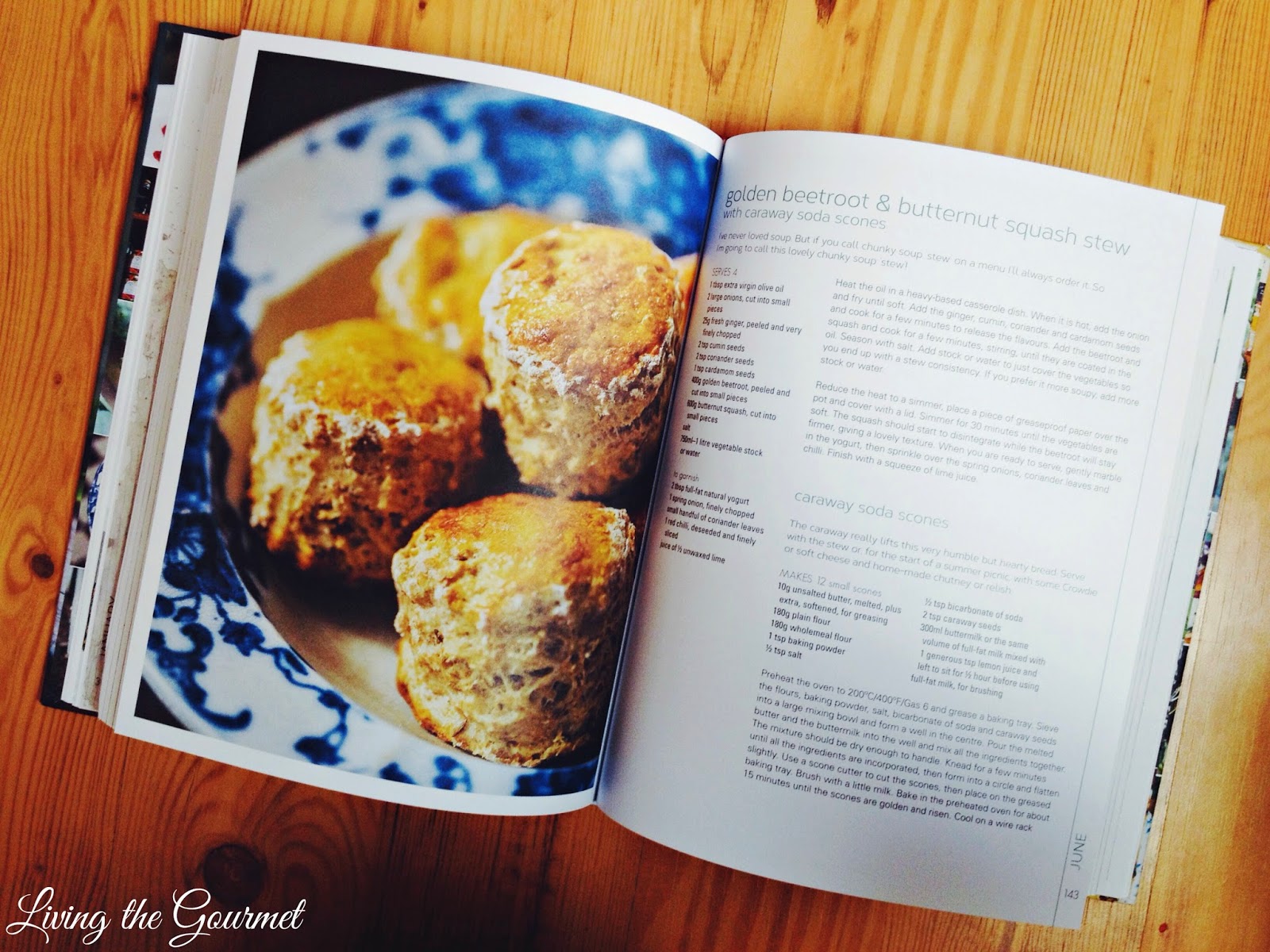 For example, January leads off with a winter chard and bean soup, with onions, fennel, and extra virgin olive oil.  January’ also features items such as chicory toast, Isle of Mull Macaroni Cheese with Cauliflower, and a simply must-try recipe for ‘steak pie.’  The chapter ends off with growing notes for cauliflower, swiss chard, and winter cabbage.  February contains similarly hearty fare, with seasonal items including lobster, haddock, endive, kale, and hake in season, signaling that these and similar ingredients will feature prominently in its recipes. 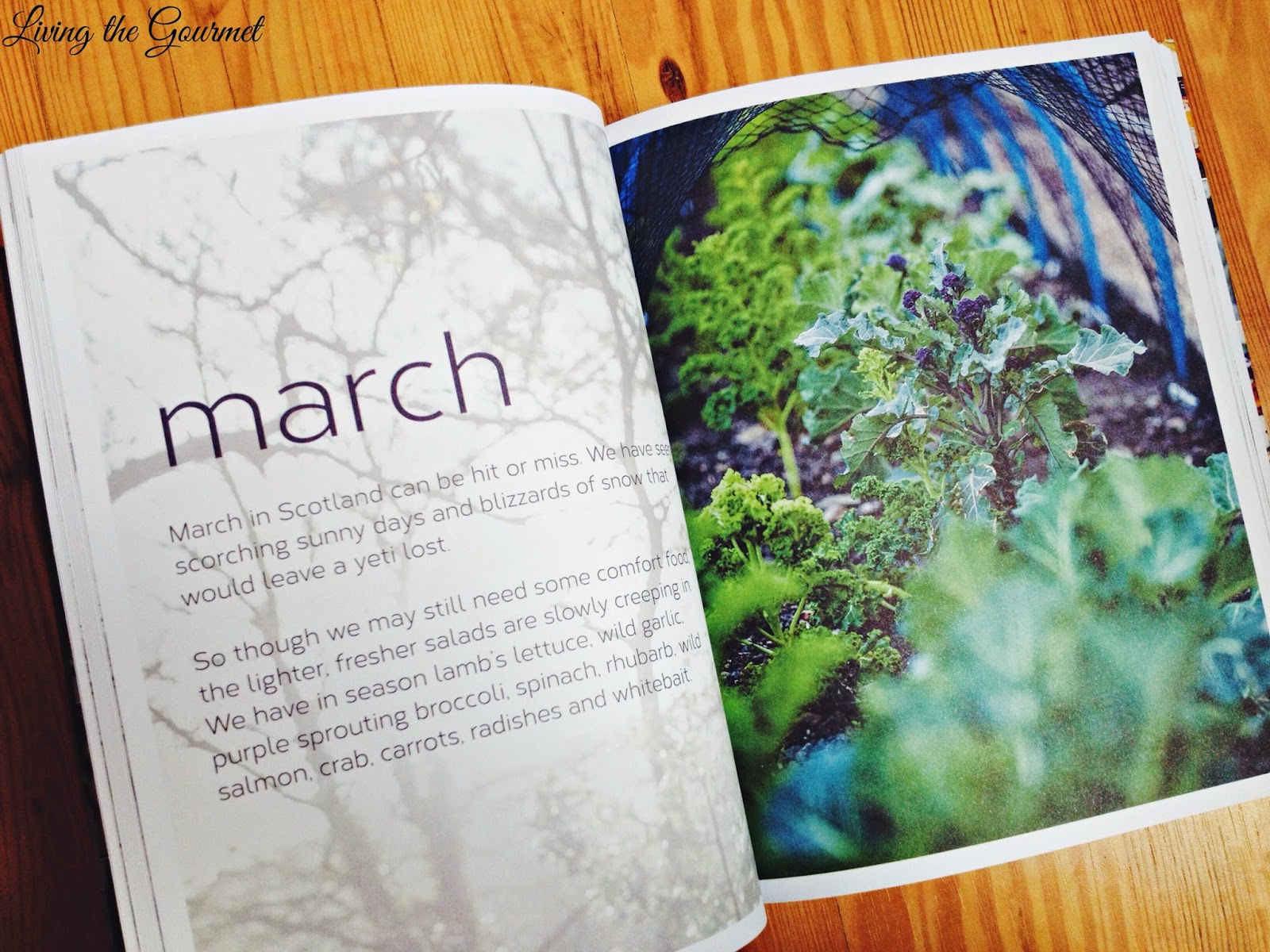 The chapter ‘March’ combines winter hardiness with milder summer fare, with light salads featuring prominently, such as the ‘Fried Whitebait with watercress,’ and the ‘Watercress, carrot, and radish Salad.’  Other seasonal items include wild salmon, crab, and garlic, producing such recipes as a ‘Crab Soufflé,’ and a delightfully unique recipe for ‘Salmon Pancakes,’ in addition a traditional ‘Lemon Sole’ recipe.  With the inclusion of desserts like ‘Cooked cream’ and ‘toffee brittle,’ the chapter ‘March’ makes for a very well rounded chapter, that I believe best encompasses the overall focus of the book’s intention, while summarizing its texture palette. 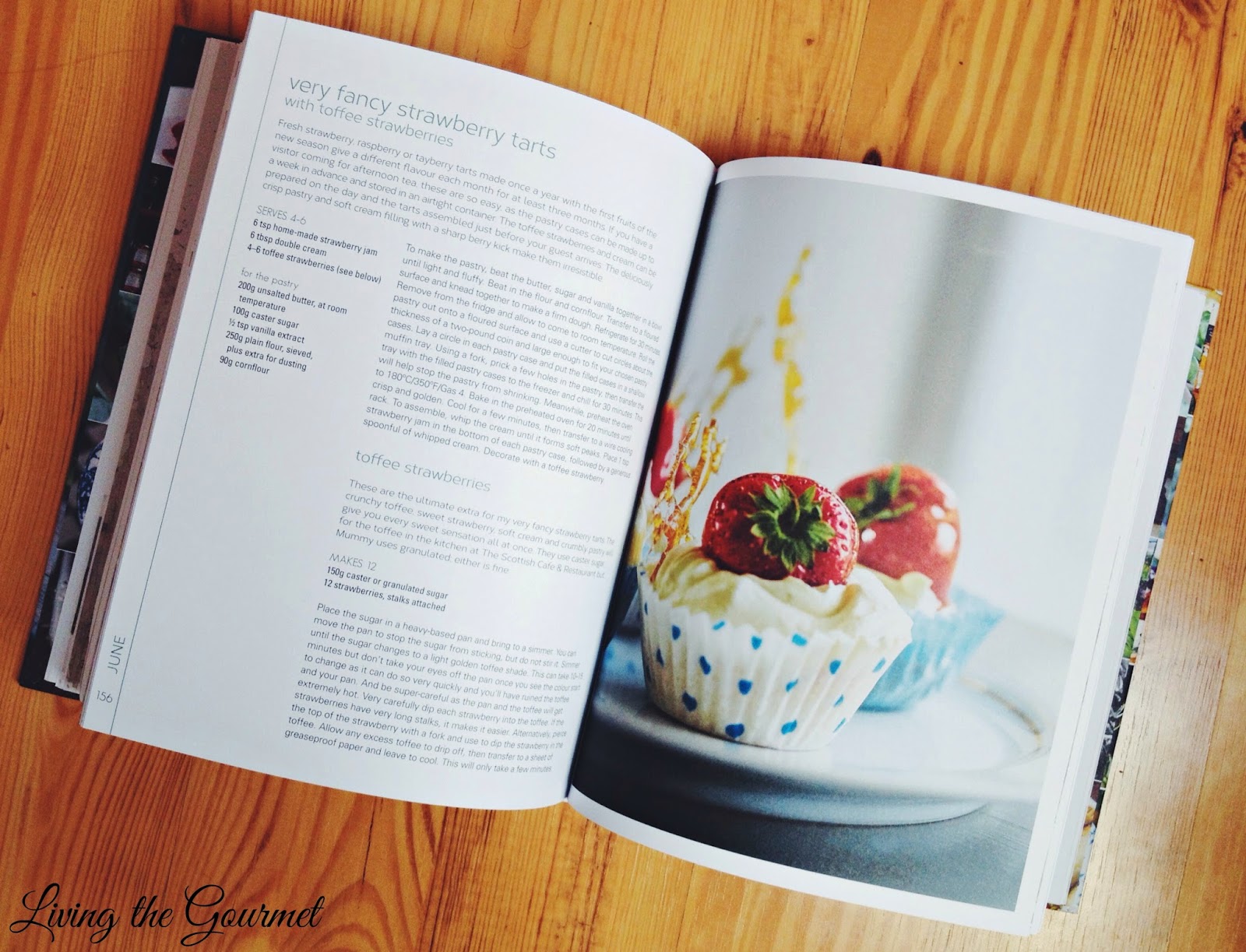 The author introduces April as month where the seasonal fare grows to include such produce as wild garlic, pea shoots, rocket and spring onions, with seafood expanding to monkfish and mussels.  The chapter opens with a quintessentially Scottish dish – black pudding salad with pea shoots, olive oil, and rapeseed, and moves onto items such as chicken liver parfaits, smoked mackerel pate, and spiced lamb racks.  The chapter also includes a recipe for monkfish and mussel broth that caught my eye. 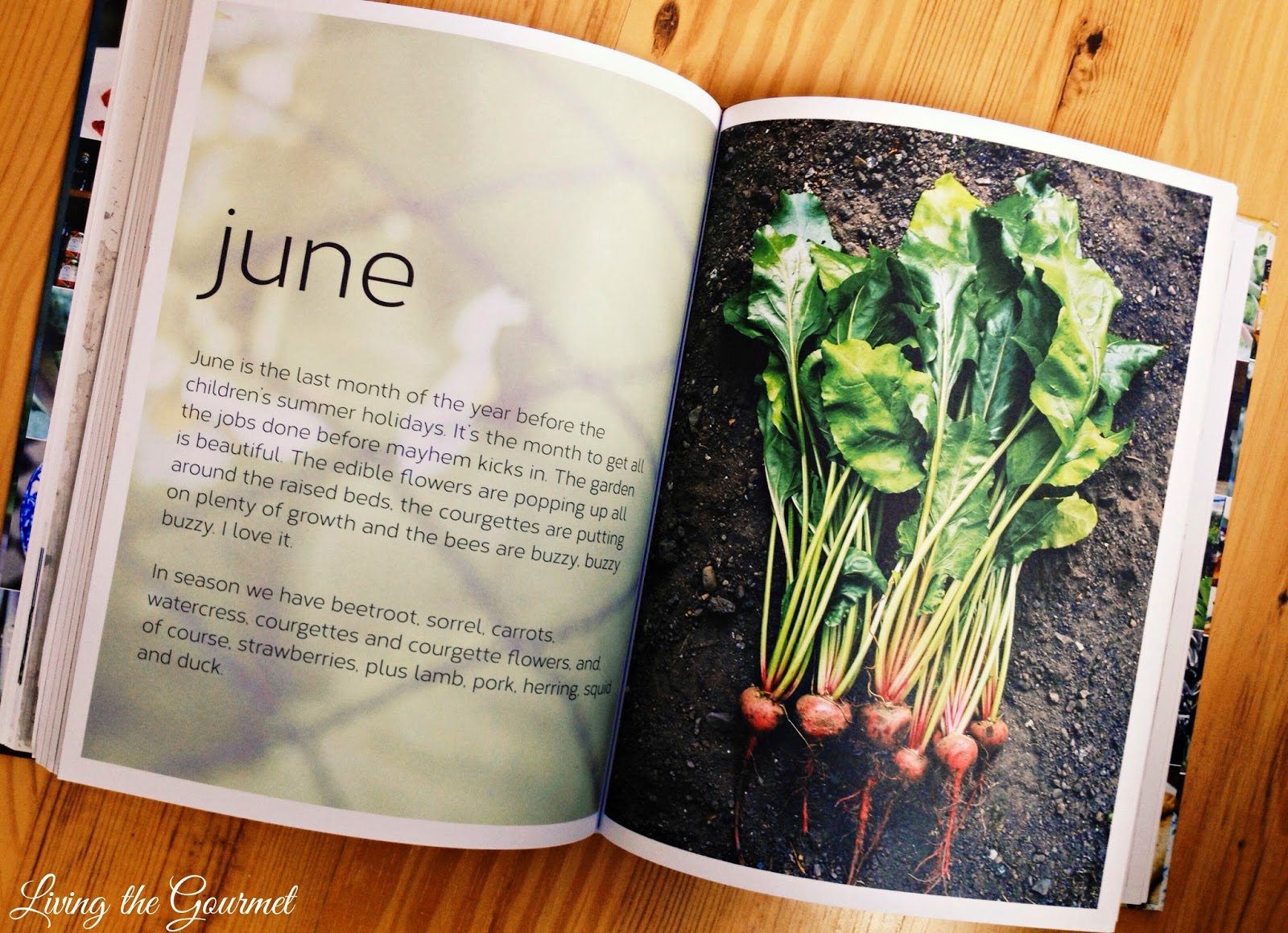 Moving fully into the summer, the chapters for May, June, and July complement one another exceptionally well.  Seasonal items from the months include chicory, crab and cod from May, with June giving us beetroot, lamb, and pork, with fennel, tomatoes and raspberries coming into season in July.  May gives recipes such as ‘Soused Mackerel with a Chickory, radish and pear salad’ and a ‘crab and sour cream pate.’  The chargrilled herring with a carrot and courgette salad is an instant ‘must’ from June, while the ‘samphire, chili, and courgette squid’ I thought was also worth mentioning, being a unique take on the seafood item. July’s seasonal items feature strongly in recipes such as the ‘Fennel Sea Bass,’ ‘courgette and fennel fritters,’ as well as ‘langoustines with cucumber mayonnaise.’ July also featured a delightful little recipe for walnut scones. 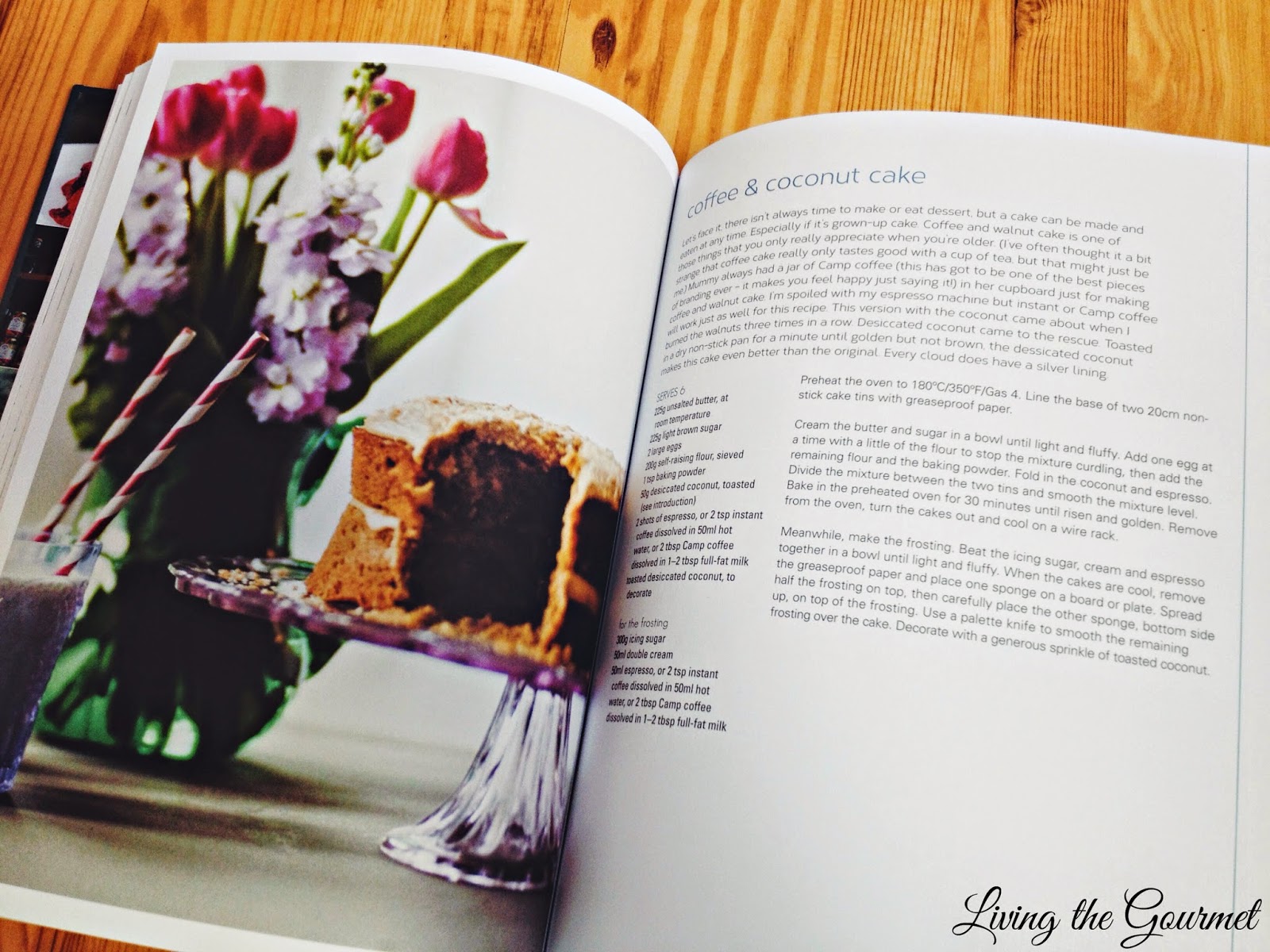 The late-summer and fall months bring us items such blackberries, celery, and garlic from August, with squash, pears duck eggs scallops and plums becoming available in September.  October brings us the familiar Jerusalem Artichoke, walnuts, apples, and, of course, pumpkins.  Cream of celery and Lanark blue soup start off the August menu, and grows to include a recipe for ‘Scotch Eggs,’ and a must-try potato salad with garlic and lime dressing.  September makes expert use of its seasonal items with a butternut squash with homemade bannocks, while a final offering combines scallops and smoked pork cheek. 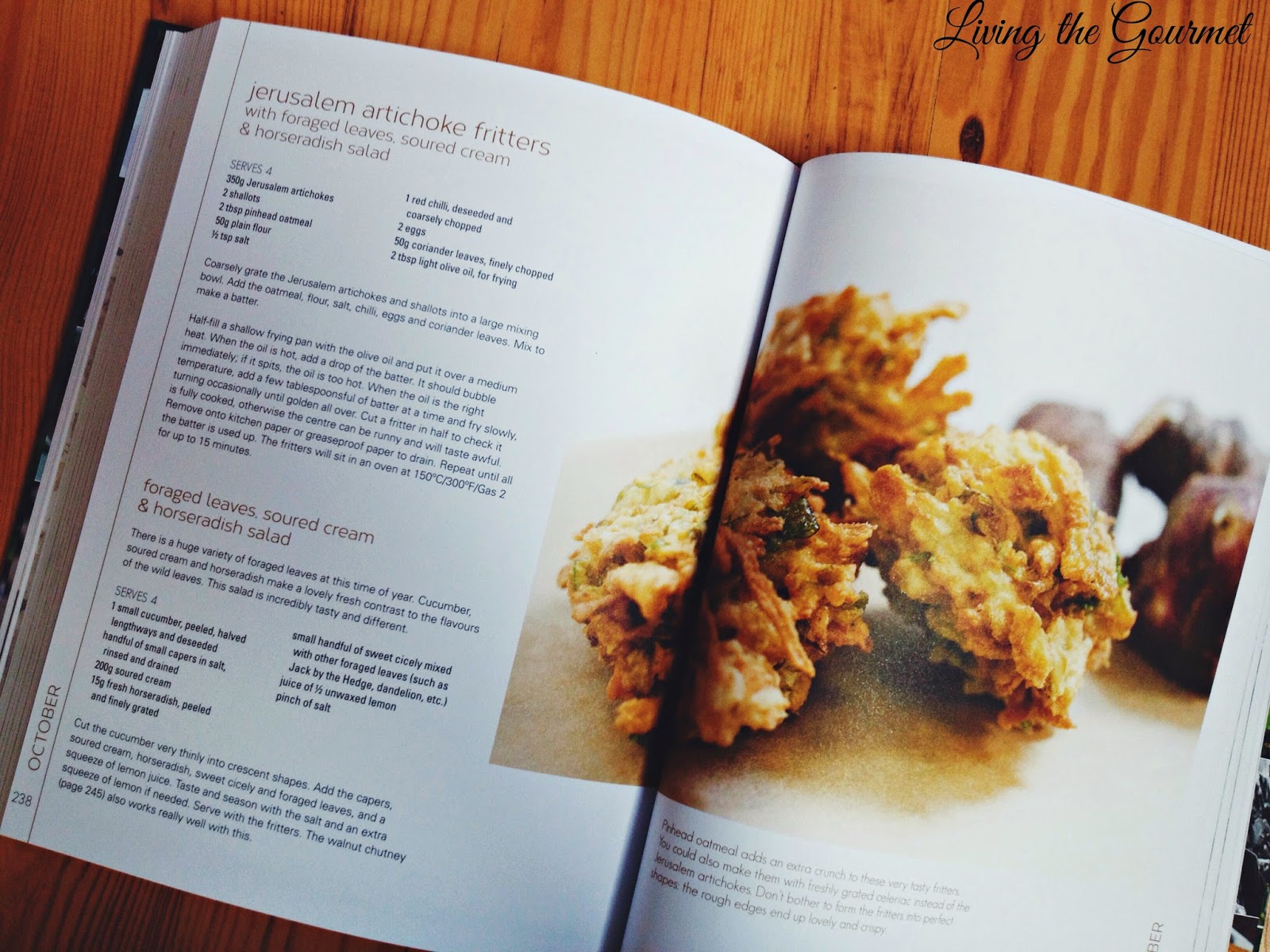 The books ends where it started, returning to winter seasonal cooking with the chapters November and December.   The seasonal winter items include onions, potatoes, chicory and halibut for November, while December offers kale, leeks, and winter salad leaves.  Among the recipes from November is a unique ‘Baked cod with potatoes and olives,’ and pan friend halibut with chanterelles.  December offers a recipe for a Marie Rose Cocktail, along with a Scotch barley and bean broth recipe.  I also suggest trying the red current jelly recipe to top off the winter seasonal offerings. 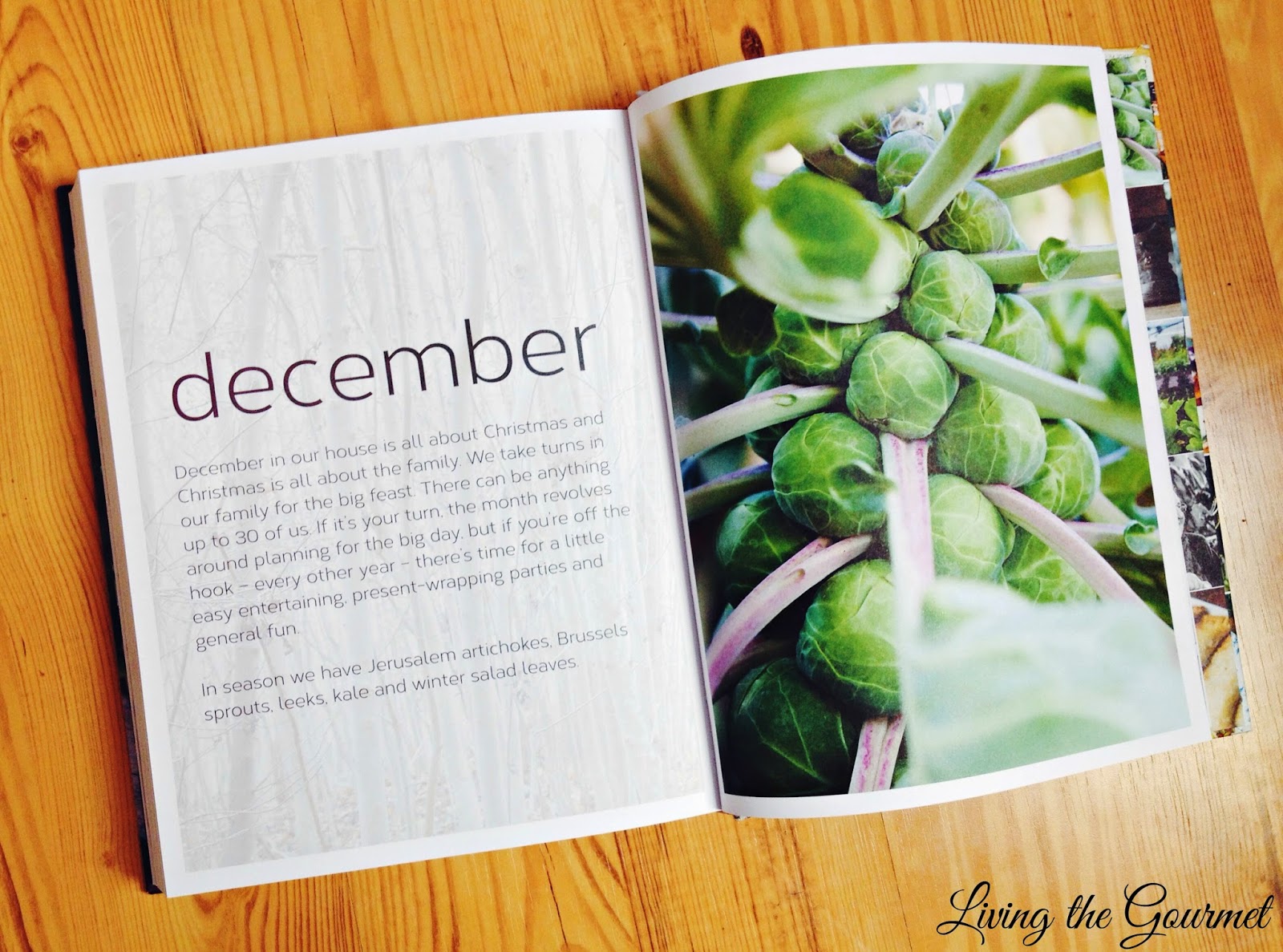 All in all, Carina Contini’s Kitchen Garden is as unique as it is delectable, a masterful take on a truly unique fusion of Scottish and Italian cuisines.  For that reason, Living the Gourmet can strongly recommend picking up a copy.

**I was given this product to review.  I was not financially compensated for this review.  All opinions expressed are my own. 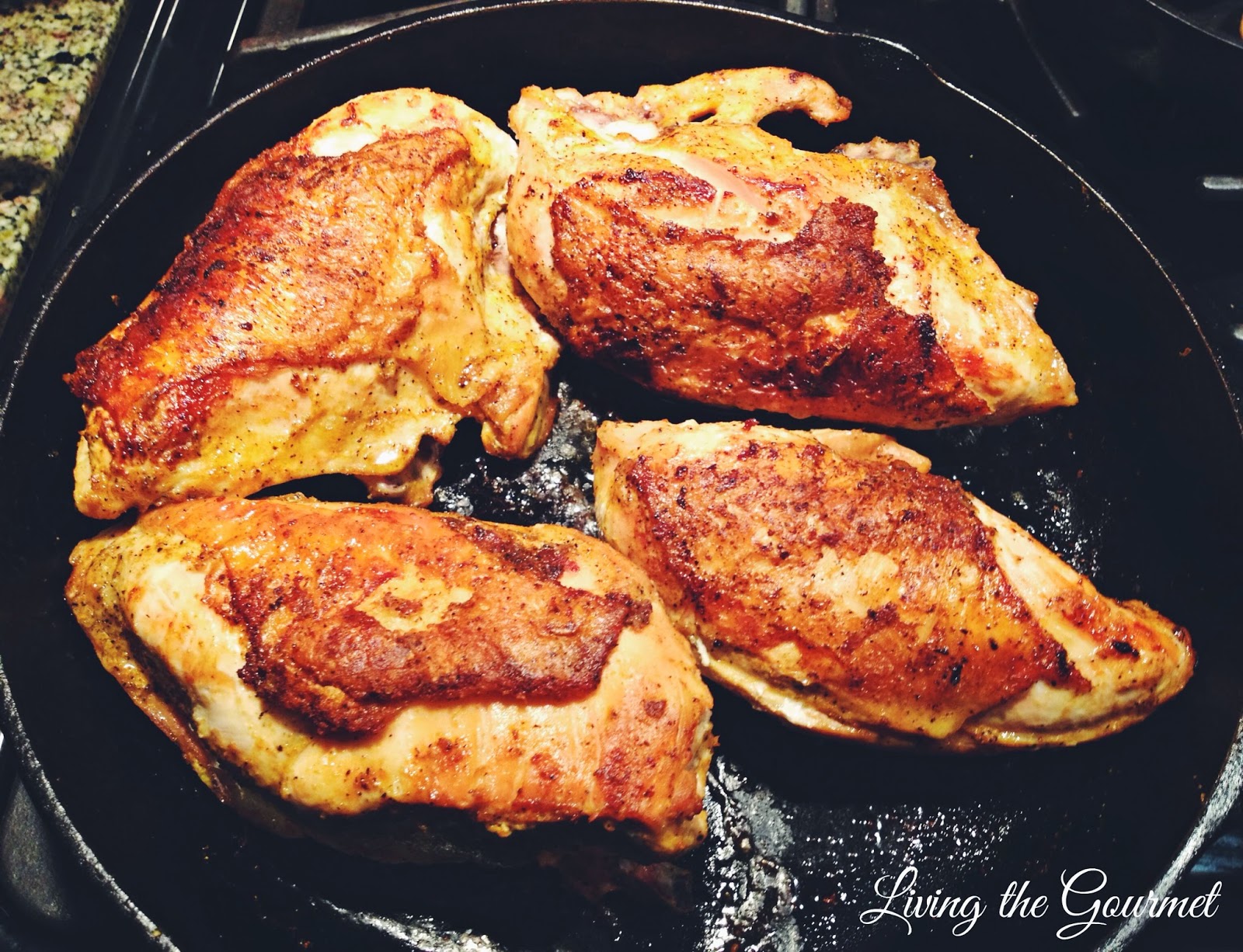 Heat a cast iron frying pan, with a tablespoon of olive oil, over medium heat.
Add the chicken breasts, skin side down.  Cook for about 3 minutes until the breasts are seared and can easily be released from the pan.  Turn them over and cook for a few minutes more.
Preheat Oven 350 degrees F.
Combine all of the ingredients for the rub in a small bowl.
Season the breasts with the rub and transfer to the oven to finish the cooking process; about another 30 – 40 minutes or until the juices run clear.
Remove from the oven and let rest a few minutes before slicing. 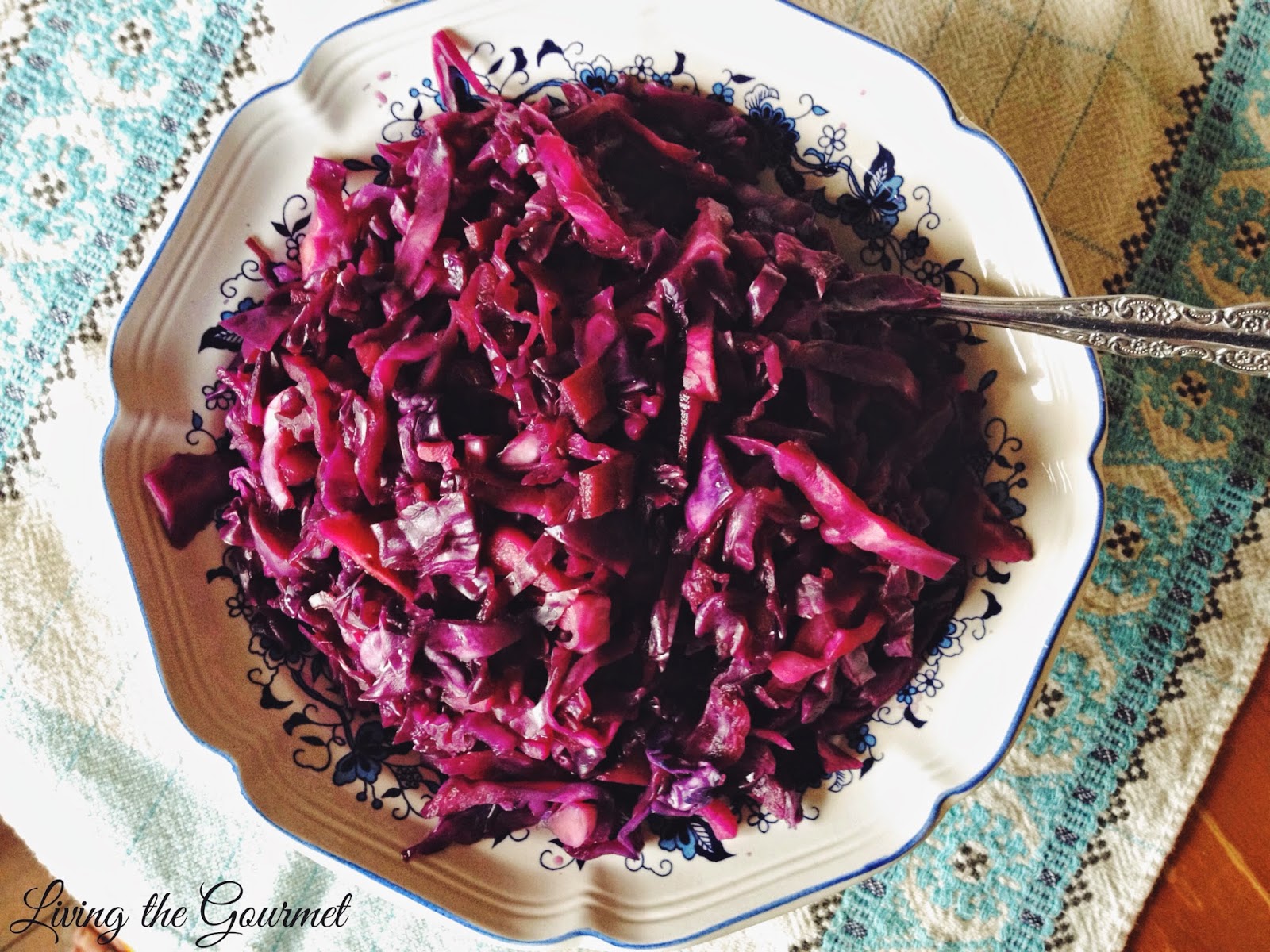 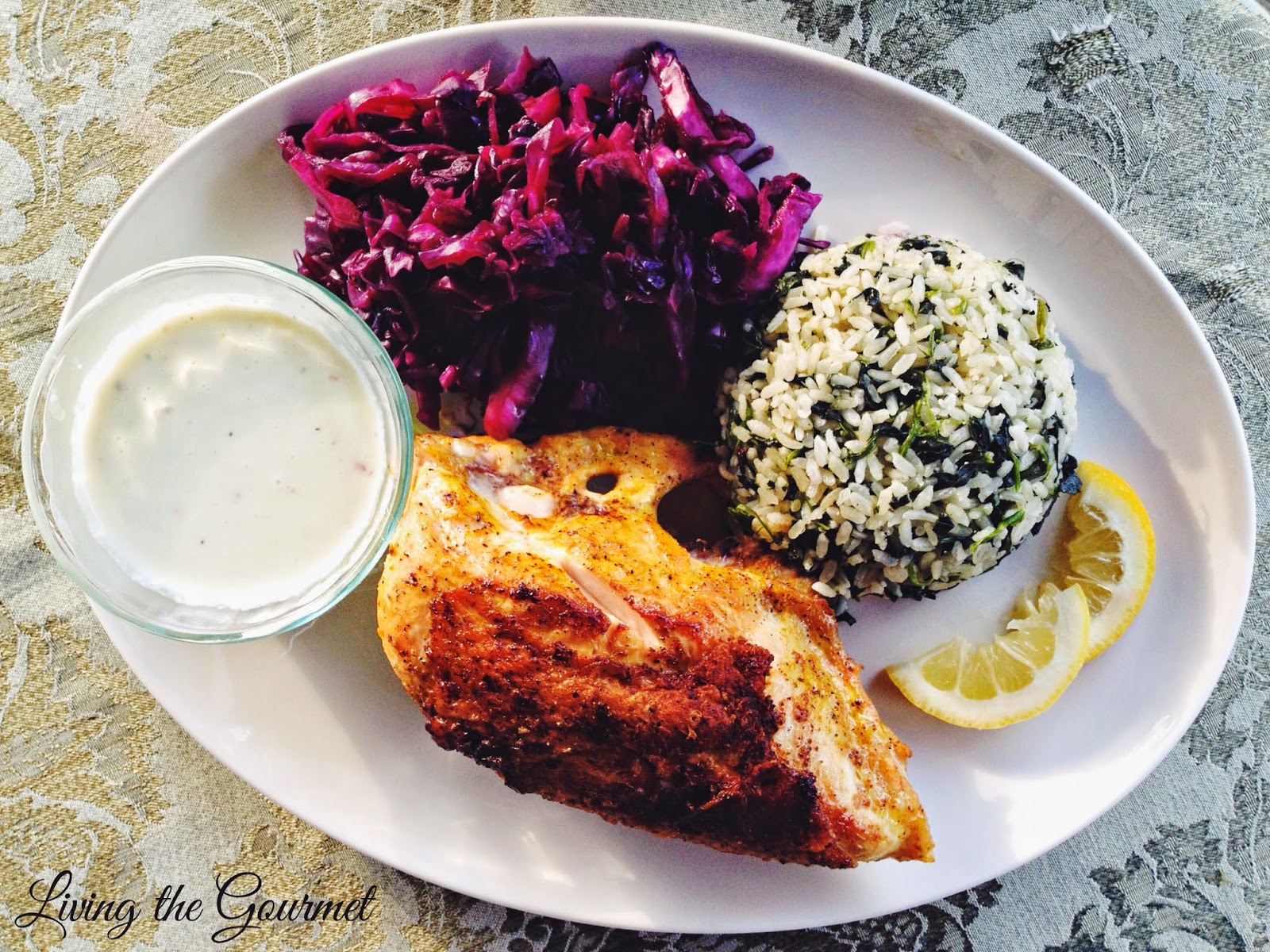