Intricate but not complicated, these Italian Style Cream Puffs are worth every bit of effort this holiday season. With a few helpful tips, you’ll see how easy they are to perfect. We complete ours with a light yet decadent Ricotta Cream and Amaretto filling.

It’s a love-hate relationship, a toxic love affair that has survived the ages.

Let’s begin with a question. Is it possible for something to be equal parts tediousness and high maintenance, but also sublimely indulgent and elegantly simple? Is it possible to be both childishly messy, and yet timelessly classy? Yes, yes it absolutely is, and no I’m not describing the villainous ex-girlfriend of a cliché romance novel, I’m talking about Cream Puffs.

The cream puff starts its life cycle as two very distinct entities – the sweet, robust complexity of a liqueur laced cream, and the delicate fragility of a crisp pastry shell, both of which need to be prepared separately, and then stored separately. Like the amorously addicted opposite ends of a toxic romance, the dueling entities of a cream puff are only meant to meet when the fun’s about the happen, because if they’re together too long things get messy quickly – very messy.

Yes, getting the ‘puff’ part of a cream puff can be a tedious process that requires a fair bit of care and practice, and having to actually ‘assemble’ the cream puffs right before you intend on serving them can be a woefully high-maintenance way to prepare dessert. But just as toxic romances can be the most alluring, there’s a reason these particular confections are a favorite not just of the ‘crowd,’ but of chefs as well.

They’re plainly delicious, and make for a gorgeous display.

My experience with cream puffs goes back to my childhood. These were a fixture on every Christmas dessert table, and they were an event every year, with my mother either showing me how to prep the pastry dough, or directing me as I mixed the cream. Then, after the company had arrived and had eaten dinner, it was invariably my job to fill the shells on the spot and serve them by the tray, and then portion out new batches of freshly filled puffs as the trays came back empty from the dessert table.

Now, the way I was taught goes something like this. In a saucepan heat together a cup of water and a stick of butter over medium heat, and stir the mixture until the butter is fully dissolved. Then add in a half teaspoon of salt, a teaspoon of sugar, and a cup of flour.

Stir the resulting mixture constantly until you have a soft, sticky dough. Once the dough has formed, keep cooking it until a film begins to form at the bottom of the pan. This process should take about three minutes.

Remove the dough from the stovetop and transfer it to a glass bowl. Allow it to cool slightly for about five minutes. After that, mix four eggs into the dough one at a time. If your dough breaks apart during this process, just keep calm and mix on. It will eventually come back together as you mix. There’s a life lesson in there somewhere… 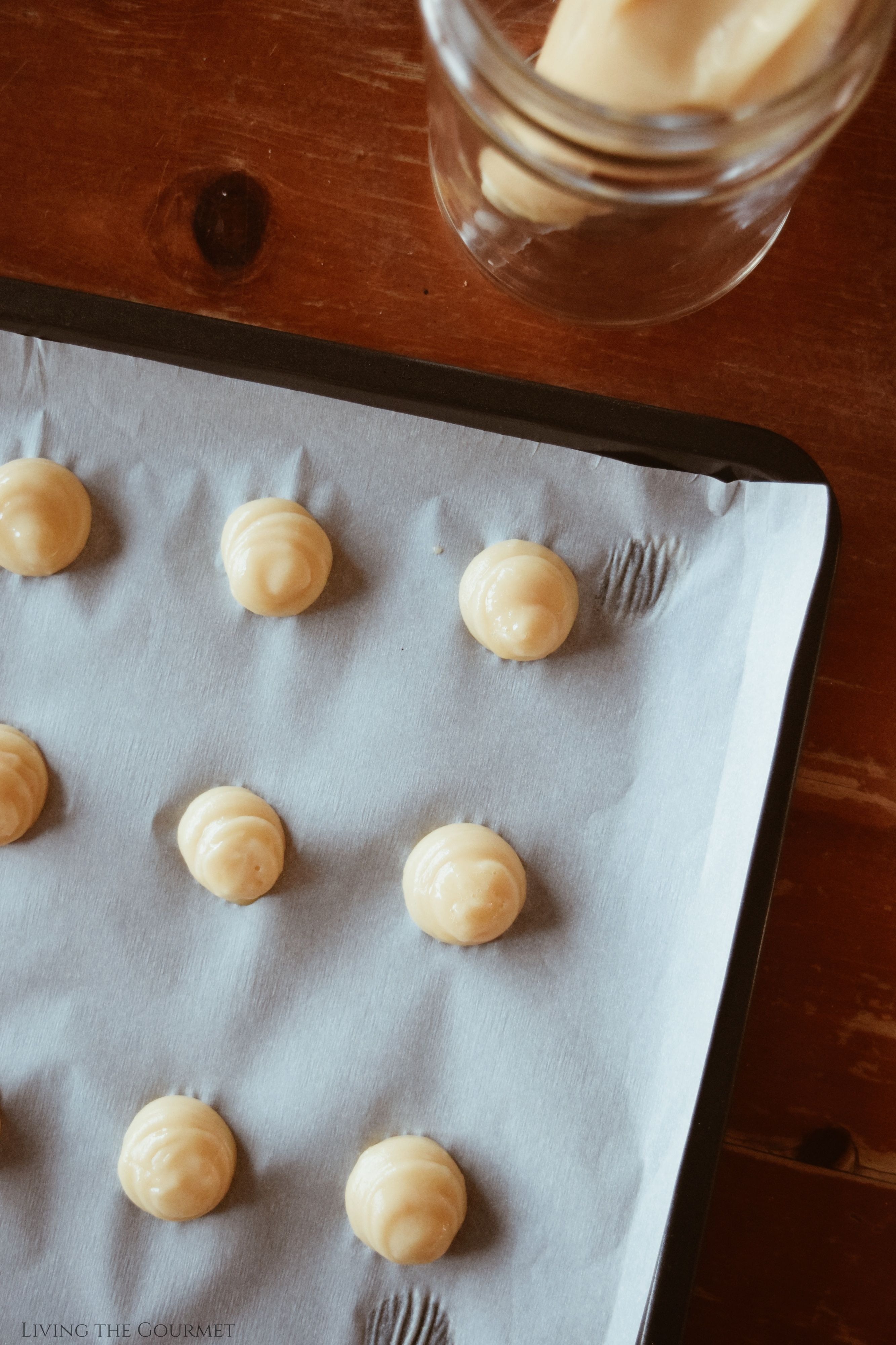 Preheat your oven to 400 degrees Fahrenheit.

Then fill a plain tipped pastry bag with the ‘pate a choux,’ which is the Fancy term for ‘the dough you just made.’ Then, on parchment lined baking sheets, pipe out one and a half inch mounds of dough. You want nice round mounds, no peaks. If peaks do form just dampen your fingers and tap the peaks down gently.

Bake them for about thirty minutes, but keep an eye on them. When they turn golden and puff up as pictured here they are done. Do not open the oven door during the baking process. 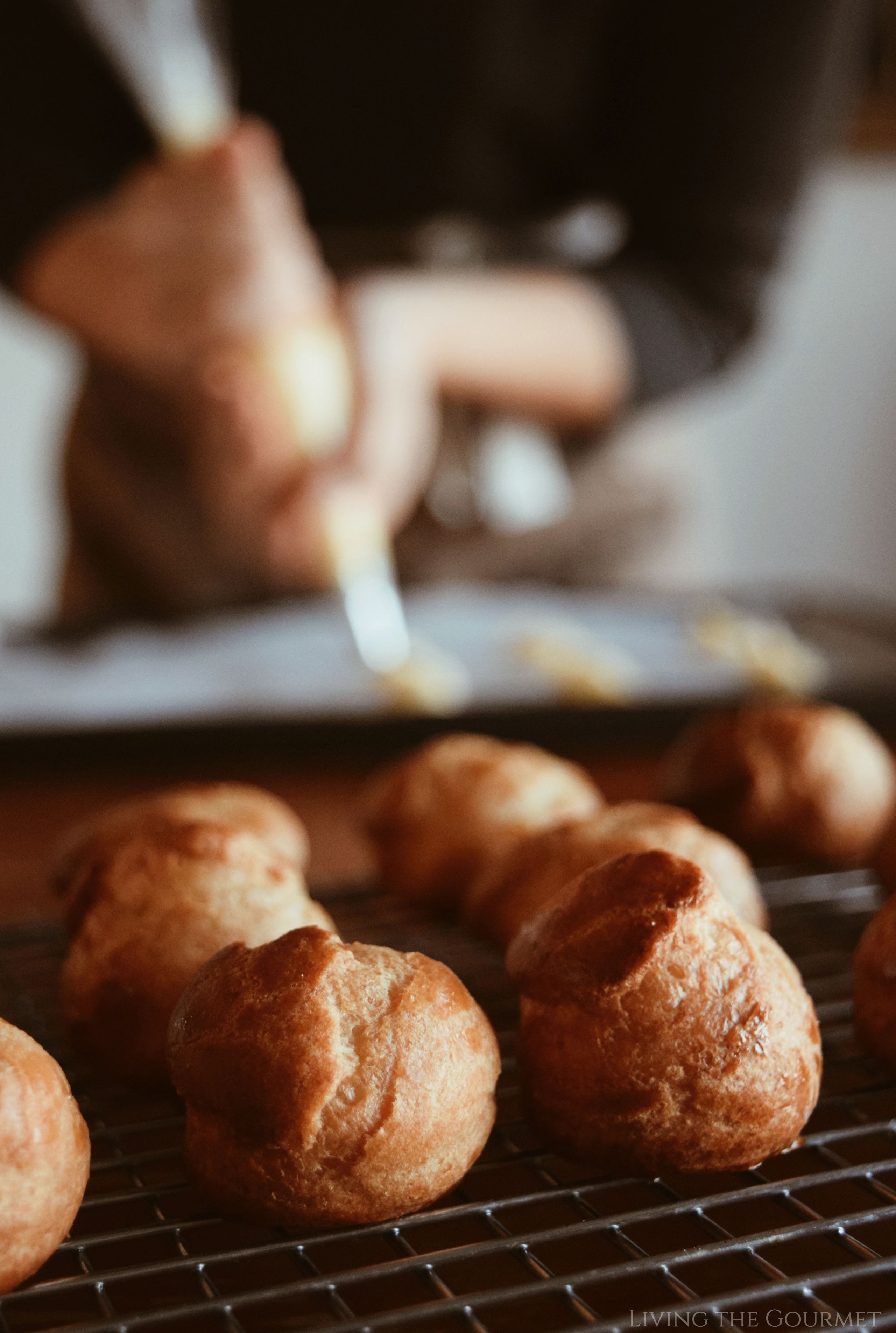 In a stand-mixer with the whisk attachment, beat together heavy cream, milk powder, and cream of tartar. Mix this together until peaks begin forming. Then, whisk in heavy cream, ricotta, powdered sugar, vanilla, and amaretto, and beat that until it is thick.

Add in the whipped cream, and let that mix on low speed until the creams are fully combined. You want a smooth, thick cream.

Now, you want to keep the cream and puffs separate until you are ready to serve them.

To fill the puffs, you can do one of two things, either pipe the cream directly into puff using a pastry bag with a nozzle, or open the puffs and spoon the cream in. I prefer the second method, but either works just fine.

1) Be a Ham. These are the perfect ‘Host who Loves Attention’ item, because the sooner your guests eat these after they’ve been filled the better. In other words, as your guests are sitting down for dinner, put on a show like you’re a master pâtissiere.

2) Shell Games. Think of cream puff shells as spoiled children. They require special, tedious attention…but only when they ‘feel’ like being difficult – otherwise they’re angels. While the shells serve best immediately after filling, and will almost literally fall to pieces if you leave them with the cream inside for too long, they can, oddly enough, be baked up to months ahead of time, and then be stored hassle free in the freezer. Unfrozen, they can be stored for up to a week in the fridge. If prepared ahead of time, all they require after defrosting is a very slight – and I mean no more than 90 seconds slight – heating in the oven at 300 degrees, or in your toaster oven on its lowest setting, and they’ll be as good as new.

For the Pate a Choux Pastry:

For the Ricotta Amaretto Cream:

For the Pate a Choux Pastry:

For the Ricotta Amaretto Cream:

If need be, simply pop the cream puff shells back into the oven at 300 degrees F. for about 2-3 minutes to bring the shells back if they have gotten too soft from sitting out.