×
Jump to Recipe
Today we’re preparing a batch of chocolate dipped Coconut Almond Macaroons. Light, airy, sweet and satisfying, macaroons are easy to make and a crowd pleaser like few others.

These macaroons feature just six super basic ingredients, including shredded coconut, egg whites, almonds, almond extract, vanilla, and powdered sugar. It’s really just ‘that’ simple, and for a bit of indulgence they will be dipped in melted chocolate, but that finishing touch is wholly optional (but highly recommended for added decadence). 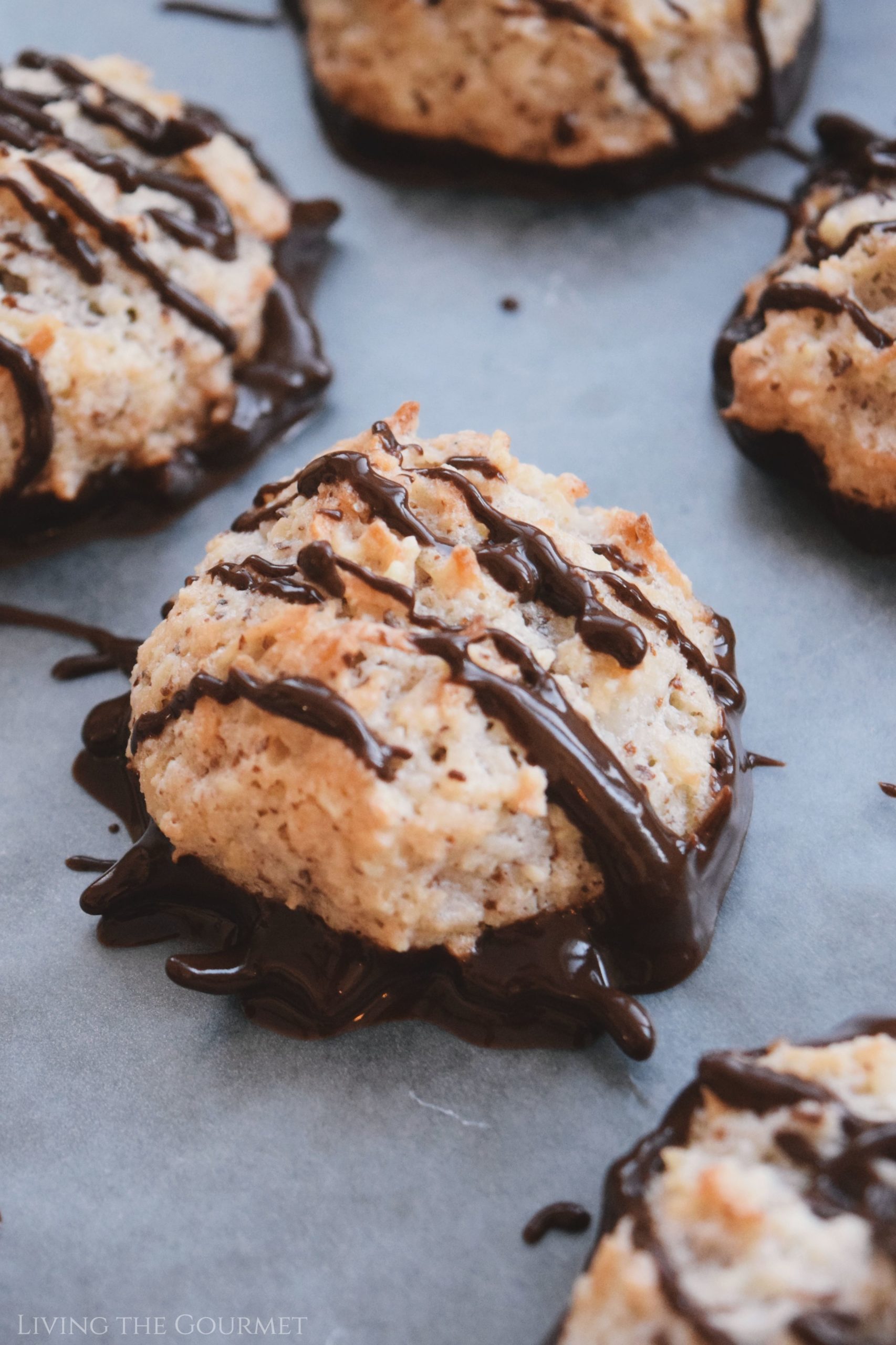 Macaroons – What are they, really?

I could start off by saying that the macaroon dates back to an Italian monastery in the ninth century. Or that the Larousse Gastronomique traces the macaroon to Commercy, France in 791 AD. I could go on to say that the ‘most basic’ formula for the macaroon has changed quite little over the past millennium and a half, with the earliest macaroons being composed of egg whites, almonds, and sugar, and were – as they are today – devoid of any leavening or flour.

According to Judy Pister, writing for the Kashruth Council of Canada, says that this original recipe had spread across Europe by the mid-sixteenth century, and that “Since the cookie has no flour or leavening, Italian Jews adapted the recipe in order to enjoy it on Pesach…Eventually the minhag (custom) spread all over Europe and although it was consumed year-round, the chewy almond paste variety remained a Pesach treat. By the late 19th century and especially in North America, the almond was replaced with coconut as the almond cookie tended to be more fragile to make as well as transport.” 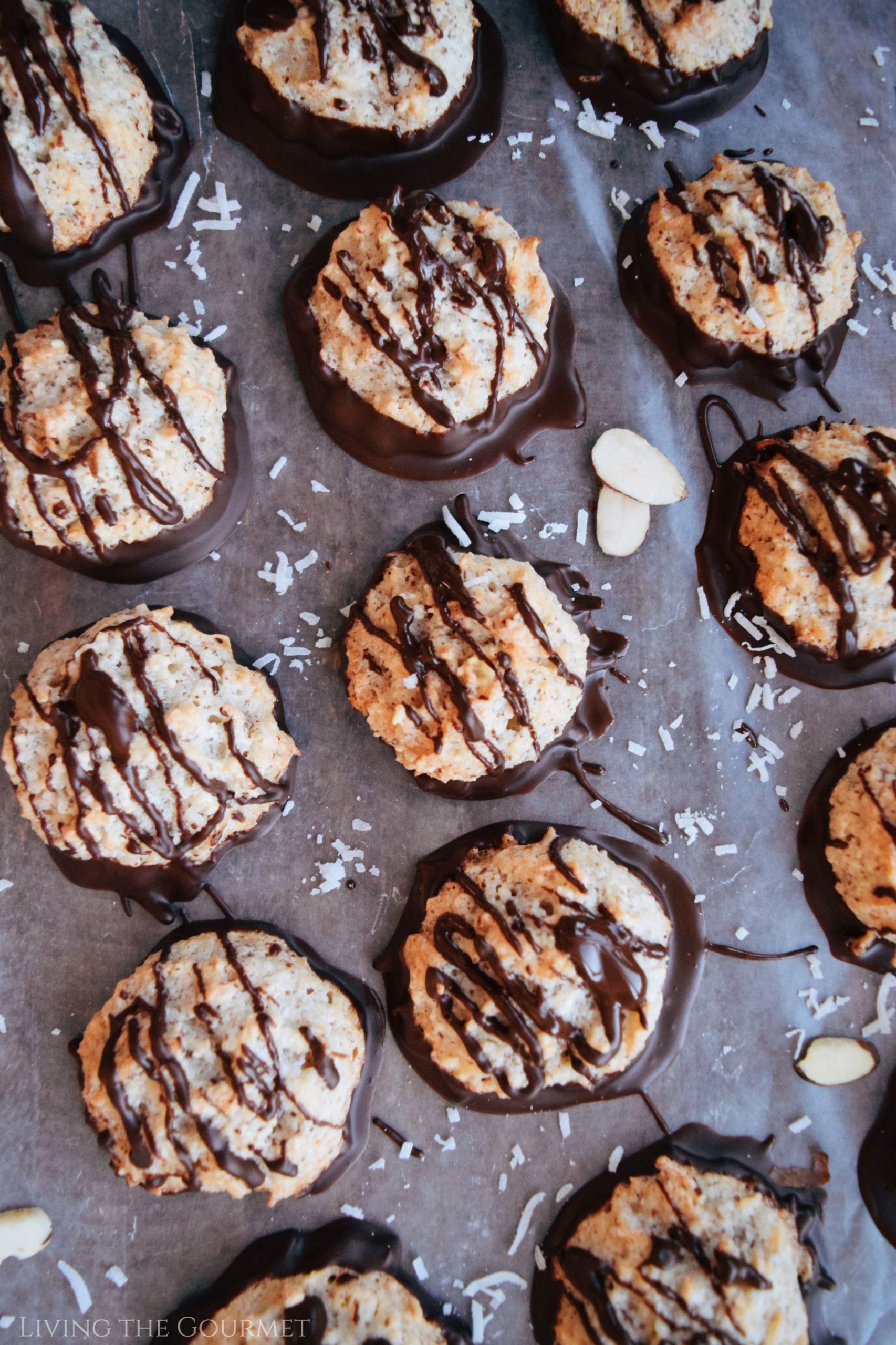 To that point, the textbook definition of macaroons tells us that these delightful little treats are simply almond cookies, whose primary ingredients include egg whites, sugar, and coconut.

However, these days macaroons are far more than simple almond and coconut cookies. In fact, the far more ‘relevant’ answer as to ‘what’ they are is that macaroons are ‘a lot of things.’ One might even say that ‘macaroon’ is more of a ‘flavor’ or ‘flavor and texture’ than a ‘thing.’

Then, of course, there are regional variations on macaroons. For example, Puerto Rican macaroons (besitos de coco), are made primarily with coconut and feature lemon zest and vanilla, while Italian Ricciarelli are quite soft, featuring a traditional almond base mixed with honey.

In short, the basic ‘formula’ for a macaroon has changed very little over the better part of two-thousand years, although we’ve embellished on the concept quite a bit over the last century or so.

1) Confectioners Sugar. Also called icing sugar, and 10X Sugar, is simply finely ground granulated sugar. The primary use for this sugar is for industrial-scale baking, particularly in items where ‘quick dissolving’ sugar is needed. At home, and in bakeries, confectioners sugar is primarily used to make icing, frosting, as garnish, and as a ‘finishing sugar.’ Today, we’re using confectioners because – as mentioned above – we want a sugar that will rapidly dissolve. Since we are only lightly cooking today’s cookies, standard granulated sugar would leave the cookies with crunchy ‘granules’ of sugar laced throughout the cookie. Not pleasant.

2) Almonds ‘and’ Almond Extract? Yes. While almonds are providing the ‘meat’ of today’s cookie, along with a copious amount of shredded coconut, almond extract serves to evenly permeate ‘almond flavor’ throughout the cookie, allowing for a more intense concentration of almond flavor than would otherwise be achievable purely by the use of almonds alone. 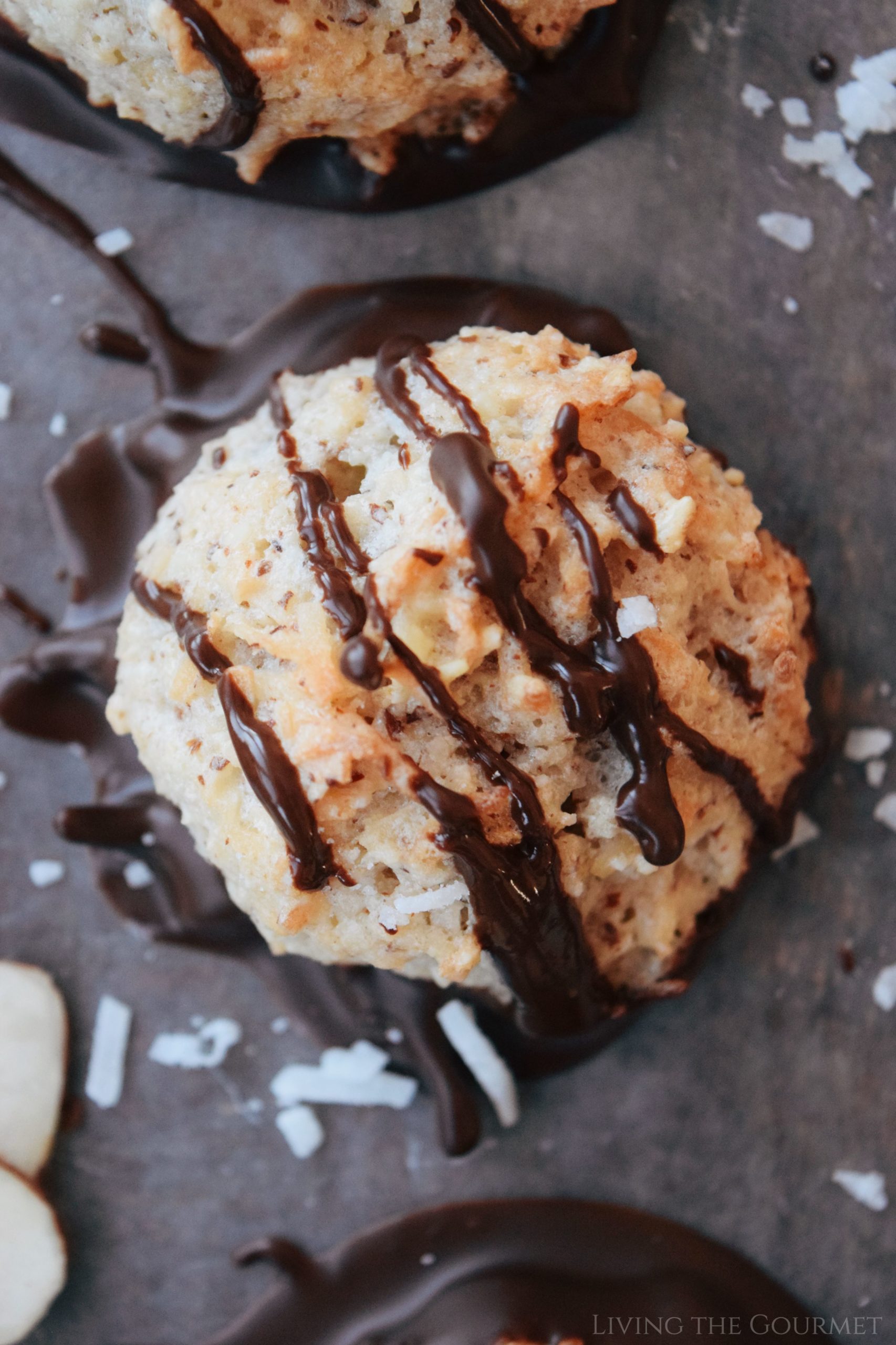 1) Brown Butter S’mores Chocolate Chip Cookies. Indulgently chewy and gooey, and decadently sweet, this is a cookie on which no corners were cut, and no indulgences spared. Featuring nutty brown butter, melted marshmallows, and copious amounts of chocolate chips, this is one of my favorite cookie recipes.

3) Chewy Peanut Butter Chocolate Chip Cookies. These are probably the most popular cookies I’ve ever posted to Living the Gourmet. Delightfully chewy, decadently moist, and cutting no corners on ‘guilty’ ingredients, try these – trust me. 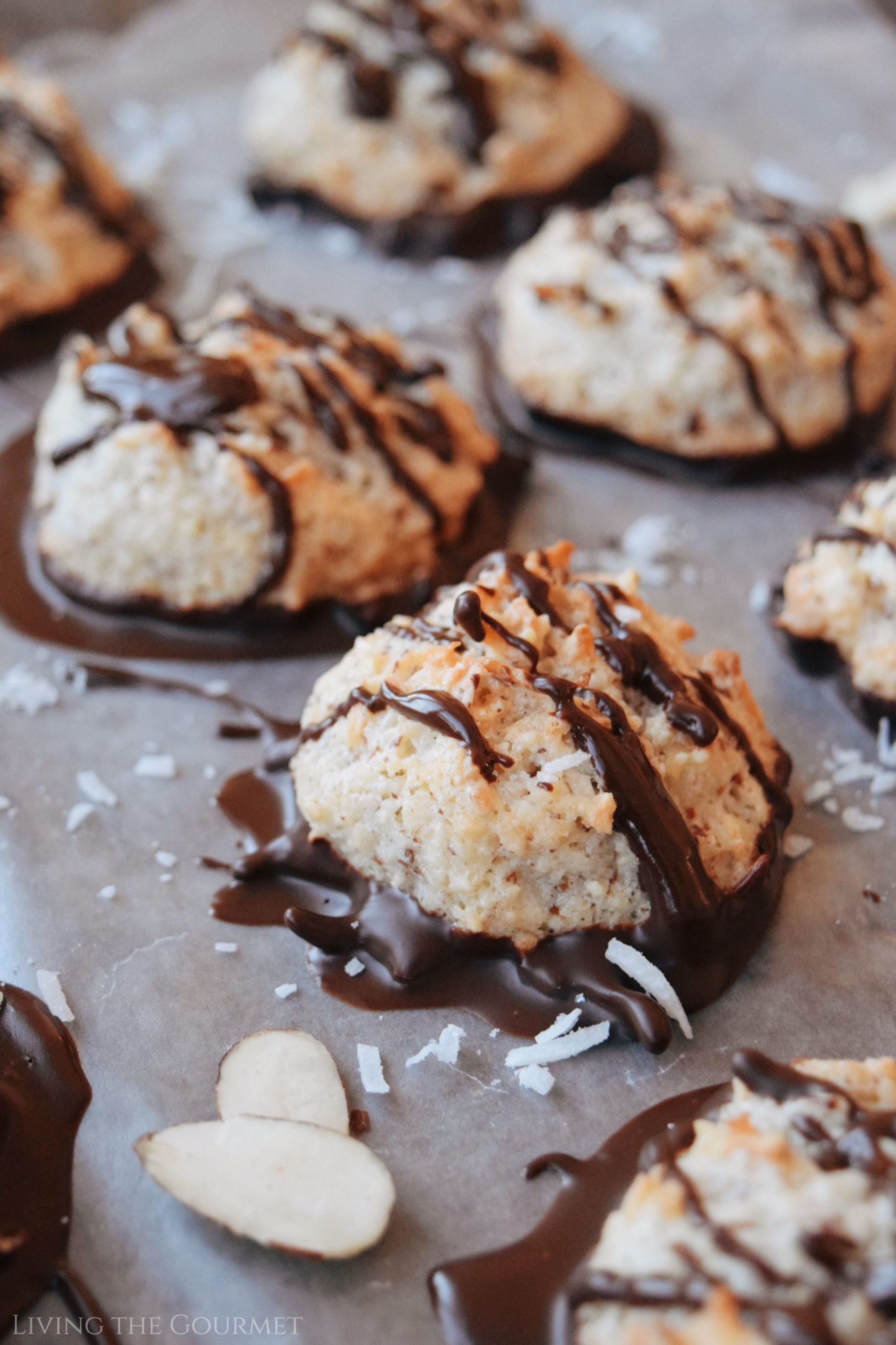 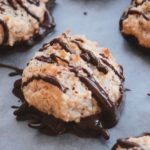 For the melted chocolate:

For the melted chocolate: 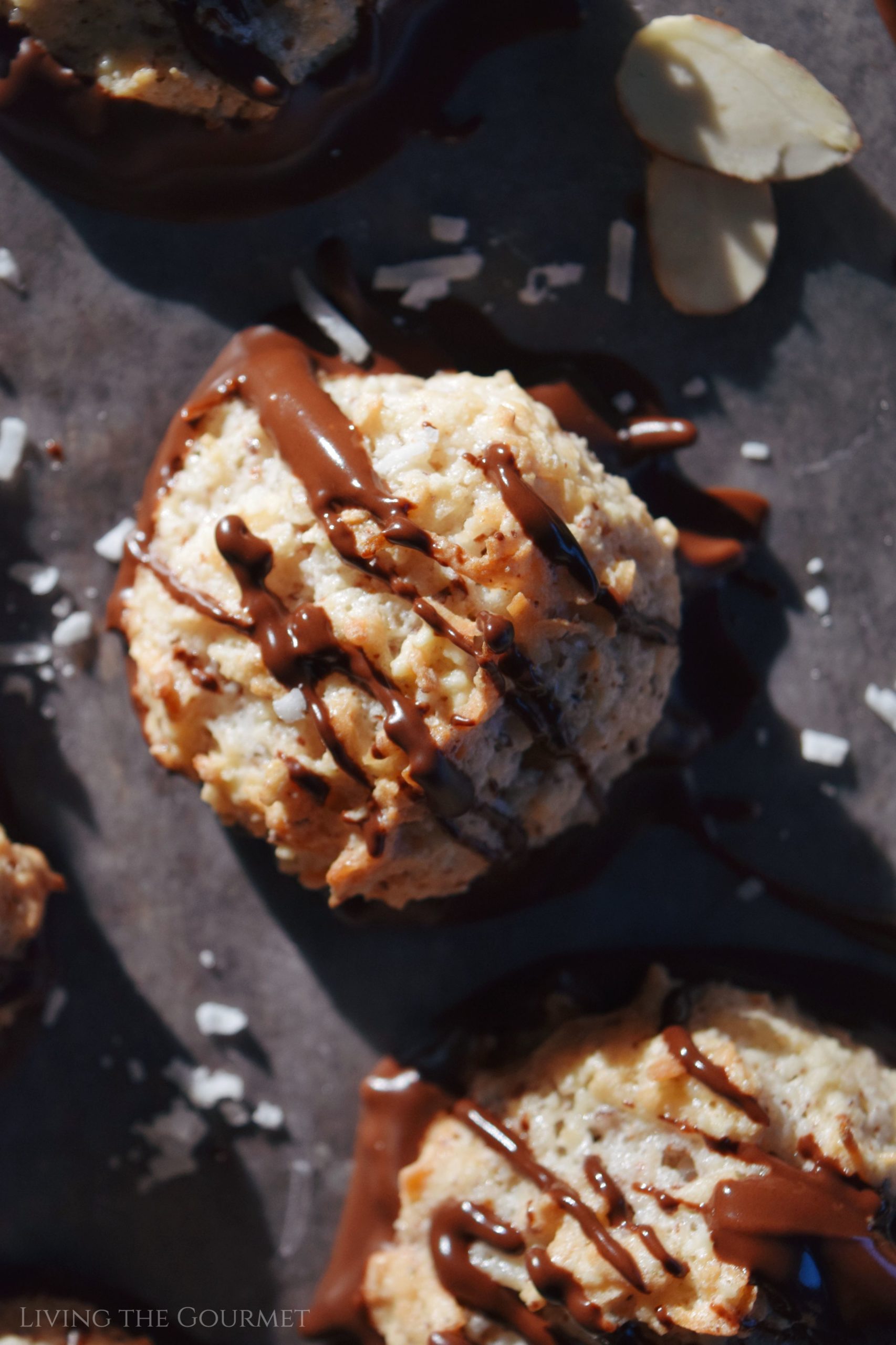